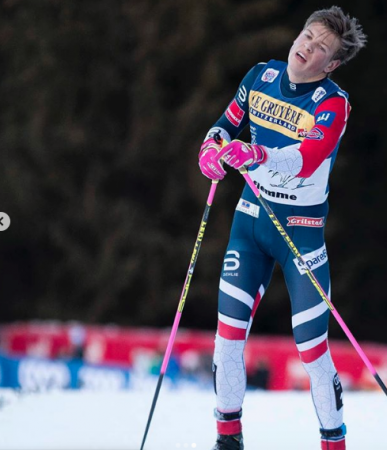 “It was just full speed to the finish and I am not stopping until the finish line now,” Johannes Høsflot Klæbo told the International Ski Federation (FIS) after his victory in Stage 6.

With the 45 bonus seconds he gathered from his win in both the overall event and the bonus sprint in yesterday’s 15-kilometer classic race, Klæbo entered the final Stage of the 2018/2019 Tour de Ski with a bit of insurance on his lead over Russia’s Sergey Ustiugov, who was ranked second in the overall standings after Stage 6. The Norwegian began the 9 k skate race to the top of the Alpe Cermis ski area 1:20.4 ahead of Ustiogov, meaning that so long as he could keep the Russian at bay through one last stage, the 22-year-old would seal the deal on an overall victory in his first ever Tour de Ski. 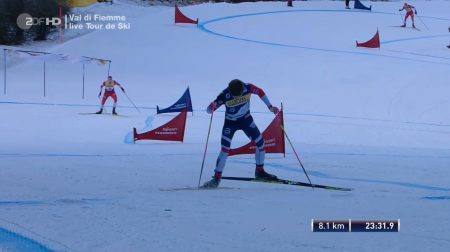 Giving his all in his final opportunity to surpass Klæbo in the Tour, Ustiugov fought hard throughout the race to close the gap between the Norwegian and himself. As the men worked their way up the steep serpentine track, Klæbo looked over his shoulder to see the Russian just one switchback below him.

Klæbo is known for his ability to make powerful moves on hills during sprint races, sometimes making the other skiers look as though they are standing still. His dominance is so well known that the short steep climb on the sprint course during the Olympic Games in PyeongChang became dubbed the “Klæbo-bakken”. However, after seven races in nine days, Klæbo looked exhausted as the men neared the top of the climb, no longer the spry sprint phenom. Ustiugov maintained a faster tempo, gradually reeling the Norwegian in. With a grimace and a last look back, Klæbo collapsed across the line in a time of 32:51.3, just 16.7 seconds ahead of Ustiugov. 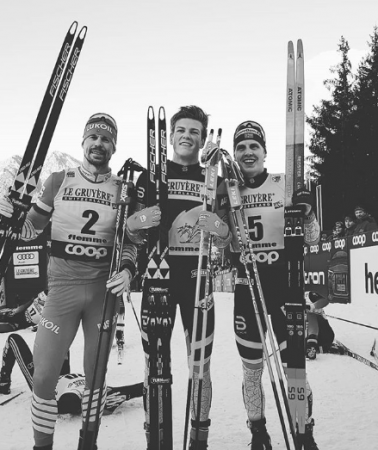 Klæbo’s win made him the youngest ever male winner of the TdS, an honor previously held by Dario Cologna of Switzerland who won his first tour in 2009. Today was also his fifth stage win in this season’s Tour, tied for the most wins with Cologna and Norway’s recently retired champion, Petter Northug jr.

“It means a lot, for sure,” Klæbo told Fischer. “PyeonghCang was maybe the biggest moment in my life, but this is a good number two. I really think this is a great start of 2019.”

The implications of differences in start time are not as cut and dry when the gut punch of the hill climb is taken into consideration. A contingent of Norwegians lurked hungrily behind Alexander Bolshunov of Russia and Francesco de Fabiani of Italy, ranked third and fourth, respectively, entering the final stage. Simen Hegstad Krüger, Sjur Røthe, Martin Johnsrud Sundby, and Didrik Tønseth held positions five through eight, all within 1:45 minutes of Bolshunov.

The pack worked together, slowly drawing de Fabiani into their sights. They passed him near the bottom of the climb. Their next target, Bolshunov, proved harder to catch. With less than 500-meters to go, Krüger skirted around the Russian on a switchback, clearly exhibiting more energy and a higher tempo. As the first Norwegian powered ahead, Røthe also surpassed the fading Bolshunov.

In the end, Krüger maintained his energy to steal the third position on the podium, 48.8 seconds behind his teammate Klæbo. Røthe took fourth (+1:05.3), followed by Bolshunov in fifth (+1:26.6).

“It can definitely eat you alive,” said Matt Whitcomb in a call. “I was really happy to see him it finish it because it devours a lot of people.”