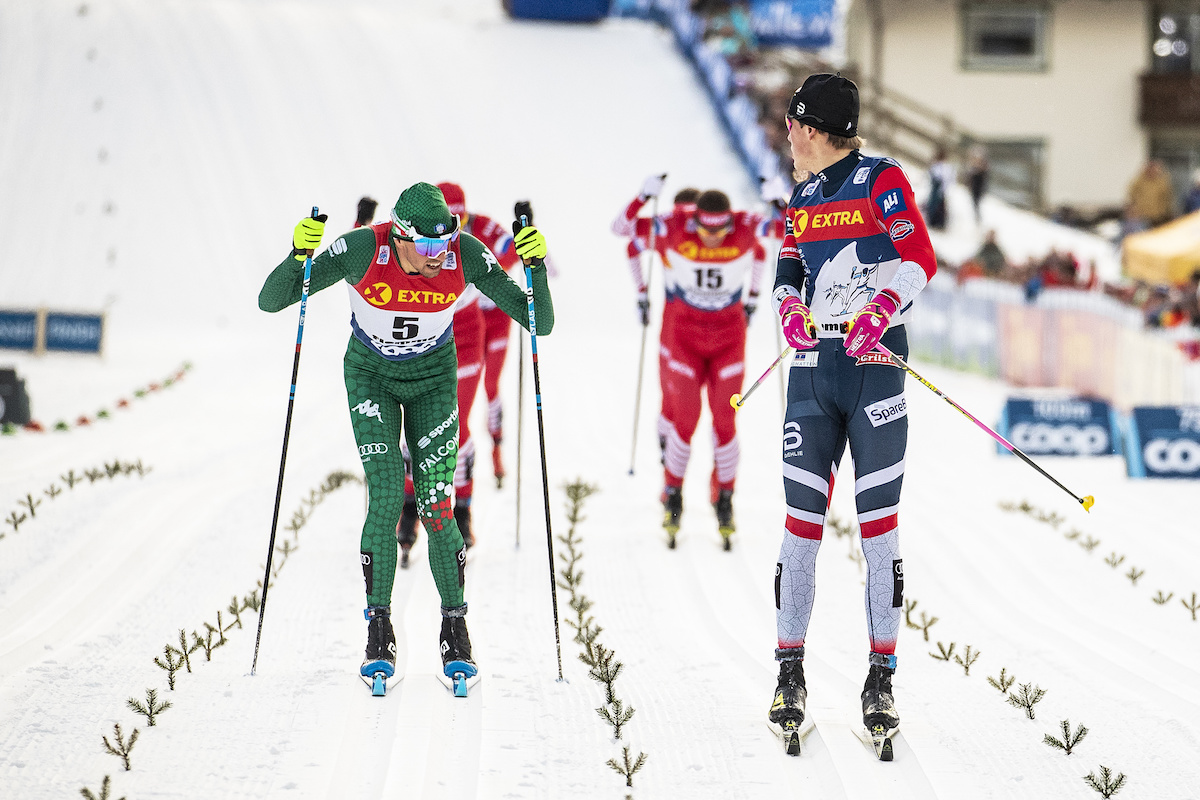 The final stages of the Tour de Ski (TdS) often bring drama: the attrition of some athletes leaving opportunity for others.

Among the 45 male competitors who chose to start Saturday’s TdS Stage 6 of 7–a 15-kilometer classic mass start in Val di Fiemme, Italy–some may have been experiencing fatigue from racing the Tour’s previous five stages; others may have been finding their peak. For Italy’s Francesco de Fabiani, who started Saturday in bib number 5, it looked like the latter.

With a little less than half a kilometer to go, the Italian appeared to be reeling in a win for Italy. He had stormed to the front of the lead pack–which consisted of two Norwegians Johannes Høsflot Klæbo and Hans Christer Holund, as well as four Russians – Alexander Bolshunov, Andrey Larkov, Maxim Vylegzhanin, and Andrey Sobakarev – in the final climb. A gap between de Fabiani and the final six expanded to almost a meter by the crest of the last uphill.

But as de Fabiani made headway into the final descent and toward the finishing stretch, the shadow of one skier closed in. One that few would choose as their counterpart in a sprint to the finish. Klæbo.

The Norwegian’s skis had caught up to de Fabiani by the bottom of the hill and as the duo approached the final 50-meter stretch to the finish line, Klæbo switched lanes and shadowed on de Fabiani’s left.

The Italian worked to stave off the powerful double poles of Klæbo, but with the race’s two bonus sprints already in the bag, Klæbo was not about to let up on the finish line sprint. He ousted de Fabiani in the 15 k’s final tracks, crossing first in a time of 40:52.6 minutes. De Fabiani crossed 0.6 tenths of a second behind the Norwegian for second place.

“I think it was really tough in the last uphill,” Klæbo said during a FIS interview after the race. “But I [managed to] get a stream down before the finish line then I held a little bit higher speed than the Italian guy so then it was just full speed to the finish and I’m not stopping before I cross the finish line now.” 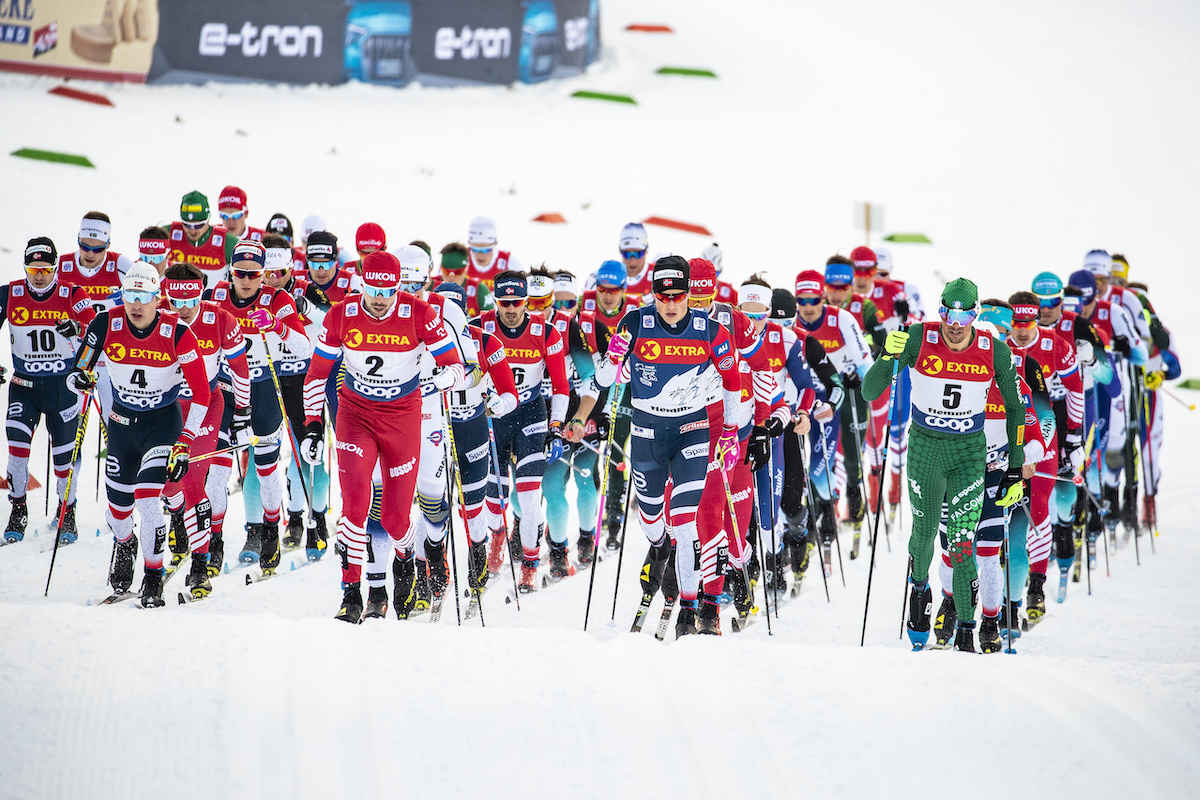 The victory marks Klæbo’s fourth of the Tour: he opened with a win in Stage 1, a freestyle sprint in Toblach, before moving on to place 12th in Stage 2 and winning Stage 3, another skate sprint in Val Müstair. After a ninth-place finish in Stage 4, he returned to the top of the podium in Stage 5, claiming first in the Oberstdorf 15 k pursuit.

His victory in Stage 6 makes him the first male in history to win four stages while still a U23 (he turned 22 this October). He also now has back-to-back TdS wins–the last Norwegian to do so was Martin Johnsrud Sundby in 2016. Notably, this is also Klæbo’s first TdS. He is now leading the men’s overall TdS standings and will start tomorrow’s final stage climb 1:20.4 ahead of Russia’s Sergey Ustiugov, who is currently ranked second in the TdS overall standings.

“Today was really hard and I was a bit afraid of the Russian guys because I heard that they were going to set a high speed but I had a very good day and took a lot of bonus second as well so it was really really cool to be first,” Klæbo said.

For the 25-year-old de Fabiani, Saturday’s second place finish is his seventh individual podium on the World Cup. One of those podiums came earlier in this season’s TdS, as he also garnered a second place finish in  Stage 4, also a 15 k classic mass start. He has now moved up to fourth in the overall TdS standings after his performance in Stage 6.

Taking the third position in Stage 6 on Saturday was Russia’s Alexander Bolshonov, who crossed 2.6 seconds behind Klæbo.

The Russian had perhaps been looking more for the win. At the 11.4 k mark, he was at the helm of the lead group, which was still 20 skiers strong at that point. In another kilometer and a half, the front had finally dwindled to seven, with a pull from Sobakarev stringing out a pack consisting of Bolshunov, Klæbo, Holund, Vylegzhanin, Larkov and de Fabiani. Bolshunov continued to set the pace until the final kilometer when a push from de Fabiani caused racers to scramble.