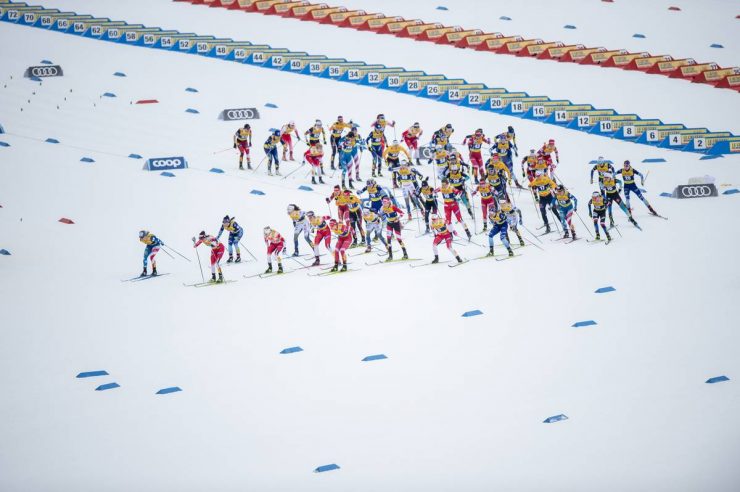 The start of the 56 skier deep field in the women;’s 115 k skiathlon in Oberstdorf, Germany. (Photo: NordicFocus)

Here at FasterSkier, we do not play the odds. Some contributors we know play Noah Hoffman’s Fantasy League – but we steer clear of rolling the dice on cross-country skiing. But the women’s skiathlon events on the World Cup may not be the biggest payouts since in recent history they have been a lock.

Oberstdorf in Oberstdorf, Germany — the site of next year’s Nordic Ski World Championships — required no crystal ball of an imagination to determine the top-spot for the women who raced a 7.5 k / 7.5 k skiathlon on a championship-caliber course.

Coming into the race, Norway’s Therese Johaug had won a total of seven World Cup skiathlon’s, including a win in the format this season in Lillehammer. With a win today she could match the record of eight skiathlon World Cup wins held by her former teammate, the now retired Marit Bjørgen.

This is about the most unspoiling of a spoiler alert: Johaug won today’s skiathlon in 40:05.2 to tie Bjørgen on the skiathlon win list. But her day was more tenuous than we would have imagined. Her gap on second place at the finish, Norway’s Ingvild Flugstad Østberg, was for Johaug somewhat meager, 15.5 seconds. Austria’s Therese Stadlober placed third (+15.6). According to FIS, this was Stadlober’s third career World Cup podium. Her two other podiums came in the 2018 Tour de Ski, one of which was a time of day podium up the Alpe Cermis.

Today, for Johaug, her race day concluded with arms raised in the air win. 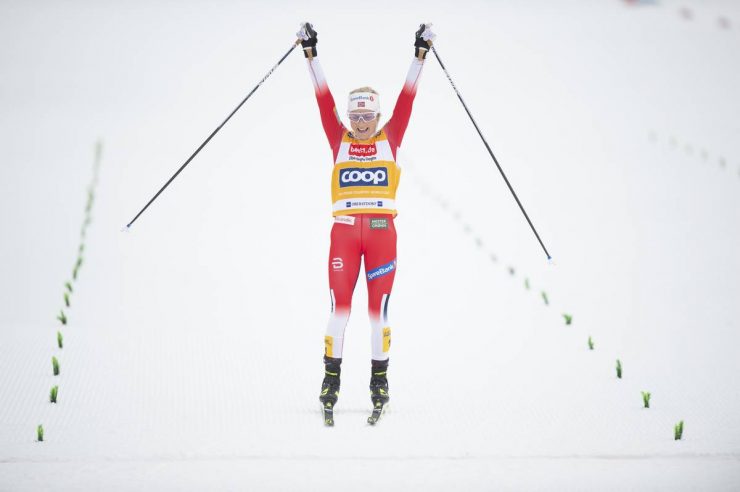 She was able to slowly stretch away from a group of chasers during the 7.5 k classic leg. She inched ahead from the main chase group near 2.5 k as she charged up the course’s main climb, the Burgstall hill. The field was spread out, but not shattered. Joahaug came over the top and into a long glide out with a 100-meter lead.

At 3.8 k, Joahug had a 5.3-second buffer on Østberg in second, with eight other skiers within 15 seconds. Roughly two kilometers later, she added another three-second cushion. By the exchange to skate skis at 7.5 k, Johaug’s lead was 14.1 seconds to Østberg. But in close contact with Østberg were Finland’s Kerttu Niskanen and Krista Pärmäkoski, Norway’s Heidi Weng, Sweden’s Ebba Andersson, Stadlober, German Katharina Hennig, and Russia’s Natalia Nepryaeva who was 18.9 seconds back.

Churn as she may in her free-radical producing high octane tempo, Johaug essentially put no more time on the core chasers during the skate portion. For a time, up through 13.7 k, Johaug had a 20.1-second margin on the next closet skier, which winnowed by five seconds at the finish. This was not a Johaug walk-away as we have seen in the past. Østberg and Andersson took the primary responsibility of keeping the void to Johaug in check. 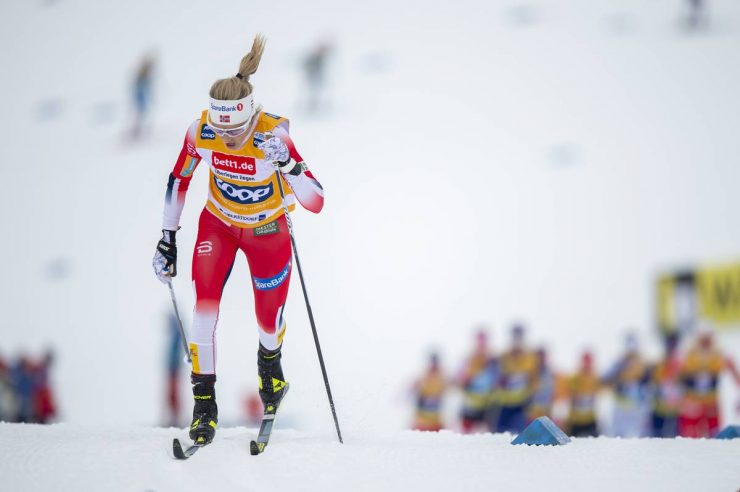 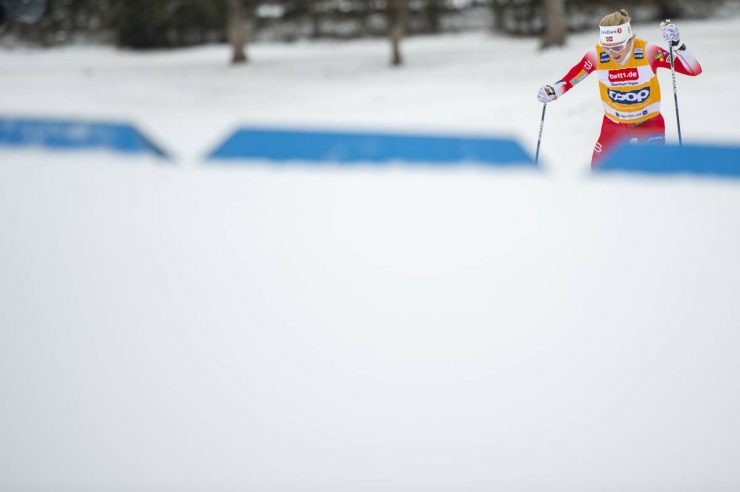 “It was a tough race out there,” Johaug told FIS after the race. “Especially the classic when I have a gap of five seconds, I know that I have to push myself all the way because if they attack me it will be a group. And it will be hard to go into skating and get a new gap again. I tried to focus on myself and work in my head all the way, but I am really happy with the first place today.”

Johaug has won 11 of 12 World Cup distance races this season and leads those standings with 896 points. Weng is in second with 595 points. 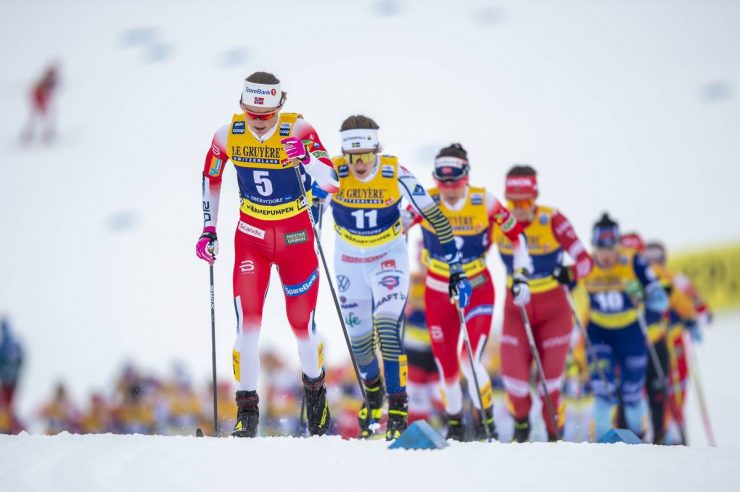 It was not the day hoped for by the top American women. That reality became evident early in the classic portion of the race. By 3.8 k, Jessie Diggins had ceded 23.3 seconds, and Rosie Brennan 27.4. The time-bleeding trend never fully stabilized. Brennan was 18th through the exchange (+55.3), Diggins 24th (+1:04.1). 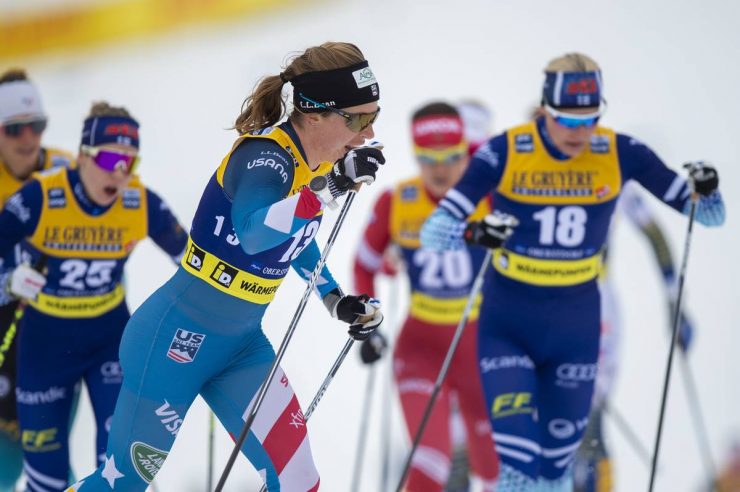 Rosie Brennan of the U.S., during the classic portion of the 15 k Oberstdorf, Germany skiathlon. (Photo: NordicFocus)

“Skiathlons are always a little unpredictable when we do so few in a year,” Brennan sent in a group email. “We were able to race on one of the new courses they have made for World Championships but due to lack of snow, we could only use one 3.75km course. The course is significantly hillier than the old course and skied quite well. However, doing a skiathlon on one course that’s split half classic half skate always causes some problems with not much room to pass. I felt very good today but struggled a lot moving through the field. I was frustrated with that but very happy about my feelings and skiing so I feel good that I am in a good place and have more good races to come.”

World Cup Coach Matt Whitcomb explained in a post-race interview that Diggins was feeling slightly off today with her sensations. 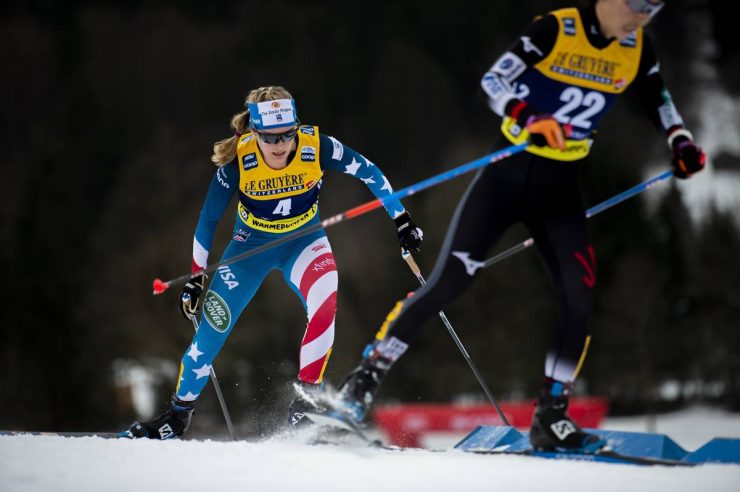 Also for the U.S., Cailtin Patterson returned to the World Cup after contesting U.S. Nationals in early January to place 34th (+3:16.5). Patterson moved up in the skate portion to 34th, after transitioning to skate in 42nd. Alayna Sonnesyn raced to 51st (+5:45.1).

“It was a fun race, I knew that I would need to make up positions in the classic part of the race without using too much energy… but I also knew the pace would start out fast,” Stewart-Jones emailed. “I was able to move up little by little throughout the race. I felt better on the skate portion but wasn’t quite able to close the gap to top 30. I am for sure a bit disappointed to be so close but it is also motivating to know that I can ski like that on a day where I don’t feel at my best! As for the team, I am really excited about our progress. Dahria has been consistently in the top 30 in World Cup sprints this year which is really exciting and her and Emily were really close to top 30 in Davos. The best is definitely yet to come with most of the team focusing on the Scando tour and World Cup finals!” 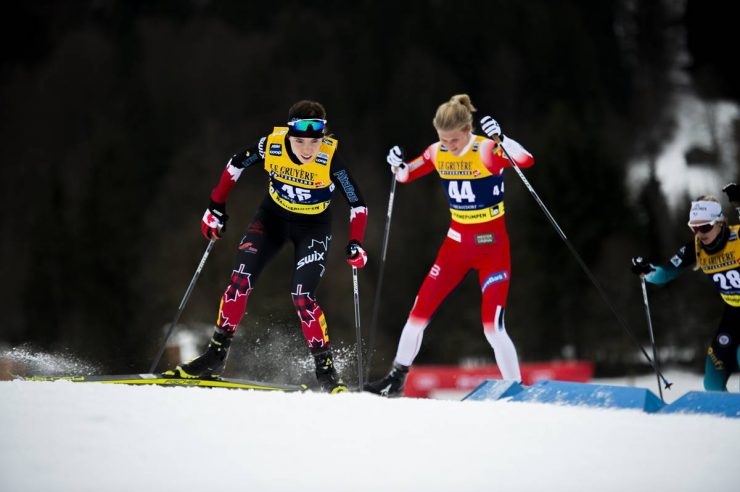 And with those concerned with the baggy bibs last week in Nové Město – it was a return to the form-fitting bibs we’ve come to know on the World Cup.

Racing continues tomorrow in Oberstdorf with a classic sprint. 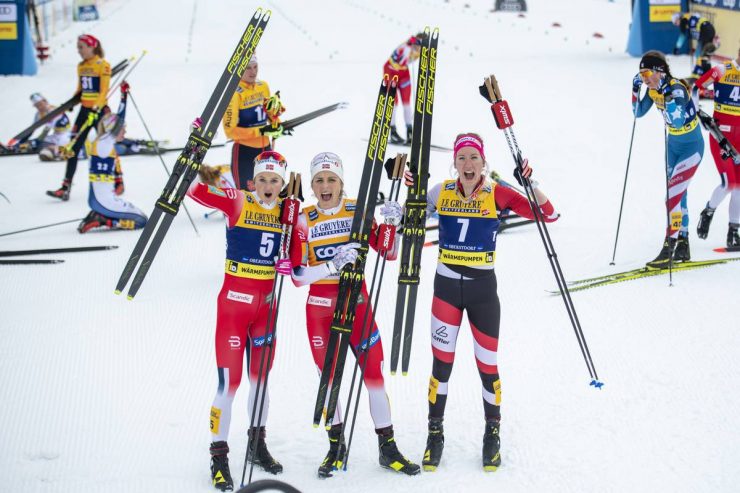