Continuing with my previews (gotta get them out before Saturday!), we’ll move on to the Canadian women, or at least two of them.

As has been noted elsewhere, since the retirement of both Beckie Scott and more recently, Sara Renner, the Canadian women haven’t had as much success as the men.  Let’s look at two of their top women: 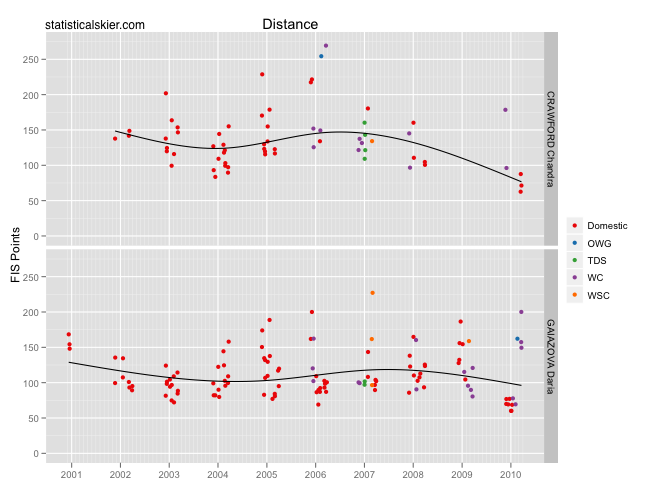 Once again, the “Domestic” category is not strictly domestic, it’s just a catch-all for “everything else”.

Nothing to write home about perhaps, but at least last season seemed to be an improvement for both women.  Crawford missed most of the 2008-2009 season due to compartment syndrome surgery, if I recall correctly, so it’s good to see her come back with some stronger results.  Still, both women will have to step things up quite a bit if they are going to want to make an impact on the World Cup in distance events this season.

In case your wondering, Gaiazova’s strong distance race this past weekend earned her 60 FIS points, which is right at where her best results were last season.

On the other hand, I think we have more reason to be optimistic about their sprint results: 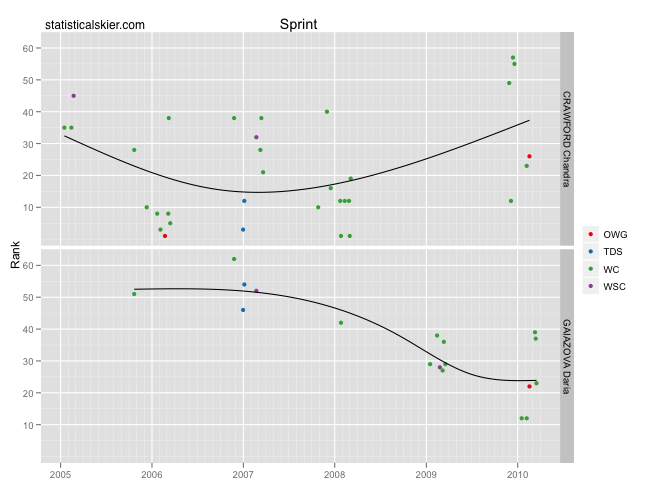 There are many fewer races in this case, since I’ve omitted the “Domestic” category (you can’t fairly compare one’s finishing place in a WC sprint race to a SuperTour sprint race).  So we should be a little cautious about the reliability of these trend lines.

Crawford quite famously had some spectacular sprint results a while back but has had some difficulty replicating them consistently.  Coming back from her injuries last season she had some mixed results, with a few rough races back in the 50′s, but also managed to qualify for the heats several times, including at the Olympics in Vancouver.  Even if she just returns to her 2007-2008 form (consistently in the top 20), that would constitute a huge improvement, I think, and would be significant victory for the Canadian women.

Daria Gaiazova seems to have stepped up her sprinting ability over the past two seasons, which is also encouraging.  After mostly hovering around the qualification round cutoff in 2008-2009, she stepped things up a bit in the heats last year to advance a few times up near 10th.  Again, if she can consistently qualify for the elimination rounds and advance into the semis every now and then, I think that would be a major step forward.

Northug Unconfirmed for Gallivare; Saarinen Out