At Polish three time overall World Cup champion Justyna Kowalczyk has never been one to keep her mouth shut. Take, for example, her accusation that Marit Bjoergen’s asthma medicine is performance-enhancing.

“Without the medicine Marit would not have won gold medals,” Kowalczyk said at the 2010 Olympics in Vancouver.

If Bjoergen has asthma, then it may very well be true. But Kowalczyk’s implication was that either Bjoergen did not have asthma and was taking the drugs anyway, or that the inhaler was so beneficial that it more than compensated for the Norwegian star’s medical condition.

Since Kowalczyk’s assertion has been much discussed, FasterSkier decided to investigate salbutamol, the inhaled medicine which Bjoergen reportedly uses. Based on scientific studies from around the world, we wanted to answer the following question: should Kowalczyk shut up, or speak up?

Asthma is a chronic lung condition characterized by two things: constriction of the smooth muscle in the airways, and inflammation of those same airways. This causes the airways to narrow, making it more difficult to breathe. Symptoms of asthma include coughing, wheezing, chest tightness, and shortness of breath. Asthma can be caused by a variety of symptoms including exercise, allergies, and air pollution.

It has been widely reported that elite athletes, particularly in endurance sports, have a high incidence of asthma compared to the general population. To fans, it might seem fishy that so many skiers have been diagnosed with asthma – but it also might be true. (note: FasterSkier will cover this issue separately in a subsequent article.)

Numbers vary by study and by country, but some surveys report that as many as 50 percent of elite athletes have asthma-like symptoms. At the Vancouver Olympics, 7.1 percent of athletes across all disciplines had documented asthma or airway hyperresponsiveness, and this group won 11.8 percent of the medals.

Salbutamol, which is called albuterol in the U.S., is a short-acting β2-agonist, a class of drugs used to treat asthma. It’s prescribed not only to athletes, but is also one of the most commonly-used inhalers in the U.S. In clinical trials, one brand of salbutamol inhaler was shown to increase lung function in asthmatics in as little as six minutes.

Salbutamol is not a steroid. β2-agonists act on the β2-andrenergic receptor, which works with several proteins and is associated with calcium channels. Inhaling salbutamol relaxes smooth muscle in the bronchi of the lungs, which leads to a dilation of the airways. In this way, it combats the constrictions brought about by exercise-induced asthma.

A 1992 study led by Alan Morton at the University of Western Australia and published in the Clinical Journal of Sport Medicine noted in its introduction that banning salbutamol outright “would virtually eliminate asthmatics from competition.”

Starting in 2009, WADA required a Therapeutic Use Exemption (TUE) for any athletes who used salbutamol. To get a TUE, athletes not only had to report asthma-like symptoms, but they also had go through a Bronchial Provocation Test, which would bring about the symptoms in a doctor’s office so that they could be documented.

In 2010, WADA changed its tune. While other β2-agonists such as formoterol and terbutaline remained on the prohibited list, salbutamol was only prohibited at urine concentrations greater than 1,000 mg/mL, which was higher than possible when taking a normal inhaled dose. In order to inhale enough of the drug to pass the urine limit, an individual would be at risk of developing tolerance, which would negate any benefit they might be getting.

The limit instead might have been designed with oral consumption of salbutamol in mind. That method of administering the drug leads to other effects, like increasing muscle mass and quickening the metabolism of lipids and carbohydrates. Oral salbutamol can also act as an antidepressant.

Regardless, athletes no longer needed a TUE to inhale salbutamol, and instead were simply required to list it on the Doping Control Form whenever they were tested.

While WADA did not explain its reasoning in changing the status of salbutamol, two basic factors were probably at play: first, the extremely high prevalence of salbutamol prescriptions in athletes who actually had asthma, and second, the lack of overwhelming evidence that salbutamol enhanced performance in those who didn’t.

After thorough research, FasterSkier found fifteen studies and three reviws examining the effects of inhaled salbutamol on nonasthmatics. While each study is different, the fifteen trials had several things in common:

The vast majority of these studies use only male subjects, probably due to the fact that there are many more elite male athletes than females and therefore the pool of female test subjects is limited.

Of the fifteen studies, twelve found no enhancement of performance parameters after taking salbutamol, while three found some benefit in one or more measures of performance or lung function.

The Consensus Is: Why Bother?

While the twelve studies which found no benefit for nonasthmatic athletes using the drug had some things in common, they were all constructed slightly differently. Some tests were shorter, some longer; some measured VO2Max and others the amount of time to complete a given distance; and some even found that salbutamol had negative effects on performance.

The Studies – No positive performance impact of salbutamol

Many of the researchers found an immediate, quick increase in lung function just after taking the inhalation. However, they found that the benefit did not last when the athlete began exercising, and by the time the test was over, the numbers were back to normal. So while they did not always claim that salbutamol had no effect, they could claim that it had no apparent effect on performance.

One example of this was a study was led by Dr. Mariann Sandsund, a scientists at the Norwegian research organization SINTEF. Sandsund’s 1997 study specifically tested the effect of salbutamol on nonasthmatic cross-country skiers at cold temperatures.

Sandsund and her colleagues found that forced expiratory volume, or how much air the men were breathing out, increased ten minutes after they inhaled salbutamol. However, once they started exercising, the difference between salbutamol and the placebo disappeared. Neither lung function, heart rate, lactate levels, nor time to exhaustion were affected by the salbutamol during the workout.

A group of French researchers working with triathletes found results which went even further in disproving the benefits of the drug: with a “supratherapeutic”, or higher-than-prescribed, dose of salbutamol, average endurance time at 85 percent VO2Max decreased from over 23 minutes down to exactly 21 minutes. In other words, the athletes became too exhausted to continue cycling more than two minutes earlier when they took a high dose of the drug.

“The bronchodilation induced by salbutamol was modest in magnitude, being significant only at the beginning of exercise,” the researchers wrote. “Inhaled salbutamol has little effect on systemic parameters.”

The study, led by Francis Christian Goubault, was more extensive than most of the others. It also examined whether the inhaling salbutamol had any of the same benefits as ingesting it orally. The answer was no: the athletes had the same level of muscle fatigue, alertness, and calmness whether they inhaled the placebo or the real drug, and their mood was more or less identical. They also failed to find any differences in blood concentrations of glucose, lactate, glycerol, or fatty acids.

In a more general study on β2-agonists, Kai-Håkon Carlsen’s research group at the Norwegian University for Sports and Physical Education wrote that “… in the present study, we found no improvement brought about by inhalation of salbutamol or salmeterol for any parameter of endurance performance in healthy well-trained male athletes, even if we employed a higher than usual dose of inhaled salbutamol… this finding… discourages rather than encourages the use of these inhaled b2-agonists in healthy competitive athletes.”

A Few Cases Of Enhanced Performance

A group of scientists in the Netherlands found the most recent evidence of sulbutamol aiding performance in non-asthmatic athletes. The other two cases were in a 1988 study by a trio of researchers at the University of California, Berkeley, and a 1992 effort from the University of Miami.

The Netherlands study, which was led by Dr. Marleen van Baak, was published in 2004. Van Baak used sixteen male cyclists and triathletes for her test subjects, and the testing was done on a stationary bicycle. The test was to time trial a distance that would theoretically take one hour to complete at 75 percent of max power.

Each athlete did the test twice: once after inhaling 800 mg of salbutamol – a level higher than the recommended therapeutic does – and once after inhaling a placebo. In each case, the average time to complete the workout was over an hour. But Van Baak and her colleagues found that it took the athletes an average of 83 seconds less to finish the time trial when they had taken salbutamol.

Looking at the data, there were two subjects who took much longer to complete the time trial without salbutamol than with the drug, and their results pulled the data toward statistical significance. One of them was also the slowest athlete in the group. For the faster, better conditioned athletes, the times for the two tests were more similar.

Why did van Baak and her colleagues find a difference where others had not?

“The reason that we did see an effect in our study, in contrast to for instance Goubault et al [the French researchers], who also studied inhalation of 800 mg salbutamol, may be that we used a different protocol to measure endurance performance in highly trained athletes,” they wrote in the International Journal of Sports Medicine.

Van Baak’s explanation is that in a test where athletes run or cycle until they can no longer continue, there is not such a dramatic shift to the anaerobic system. In an actual race, or a fixed-distance or fixed-time time trial, there is real incentive to sprint at the end.

Despite the several physiological parameters measured by the Dutch team, they could not discover why the athletes performed better with salbutamol than they did with the placebo.

Are van Baak and her colleagues right? It’s hard to say. Athletes who have done VO2Max tests before can tell you that a “step test” and a fixed-time or fixed-distance test are certainly different. However, of the twelve studies which found no benefit to salbutamol use, there were a variety of test formats, and finishing an exhaustion test often does consist of more or less sprinting to avoid dropping off the back of the treadmill. Van Baak may have a point, but she also might be oversimplifying.

None of these test formats were exactly identical to an actual ski race, because all of the researchers were interested in understanding the underlying mechanisms of any differences they might find. They wanted to measure lactate, VO2Max, and other variables that might show how salbutamol worked. To do that, they had to work in a laboratory.

Until someone finds a way to study the effects of salbutamol on the trails, these studies will be the best tool we have for understanding whether the medication confers any benefits on non-asthmatic athletes. And despite the findings of van Baak and her colleagues – which suggest that more work should be done – the consensus seems to be that salbutamol doesn’t enhance performance.

Given the information they have to work with, WADA has probably made the right decision, and the significant number of skiers who suffer from asthma can breathe easy – without a TUE. 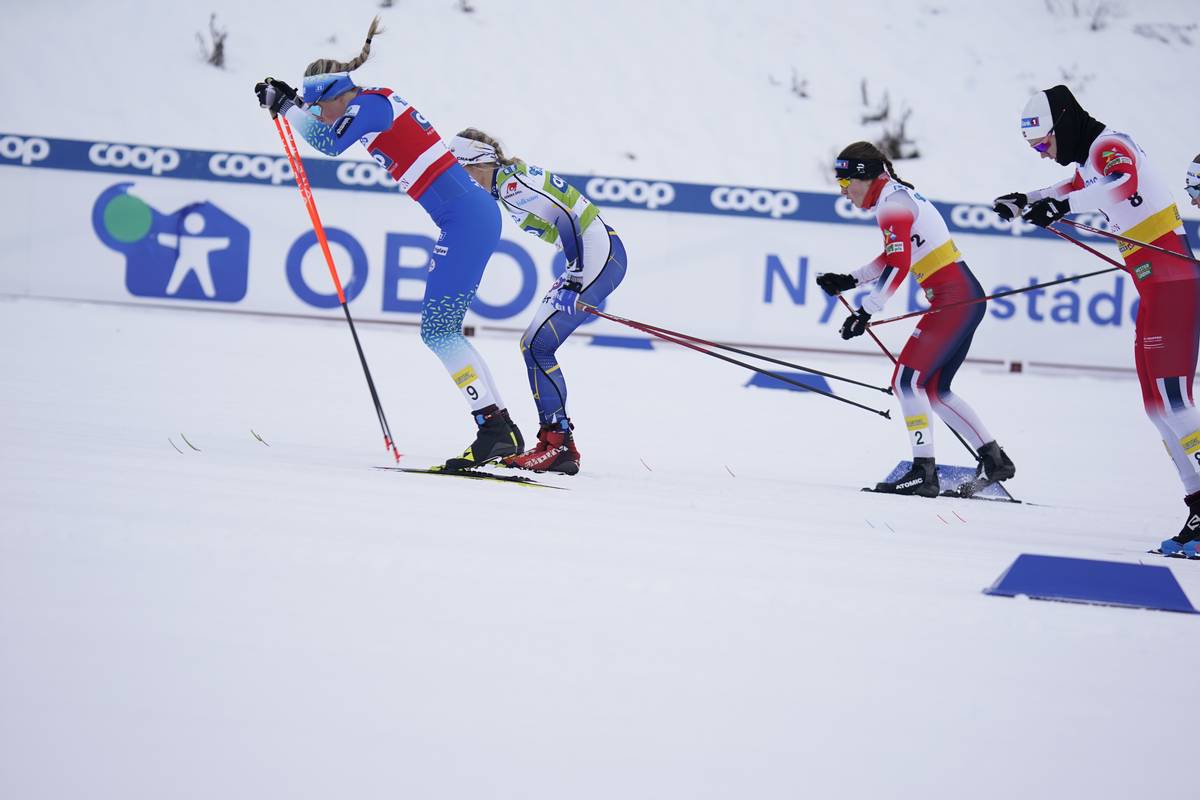