I’ve been otherwise occupied, so I didn’t follow the racing action too closely this weekend. But for you own edification, here are how the heat time shook out among the men’s finalists: 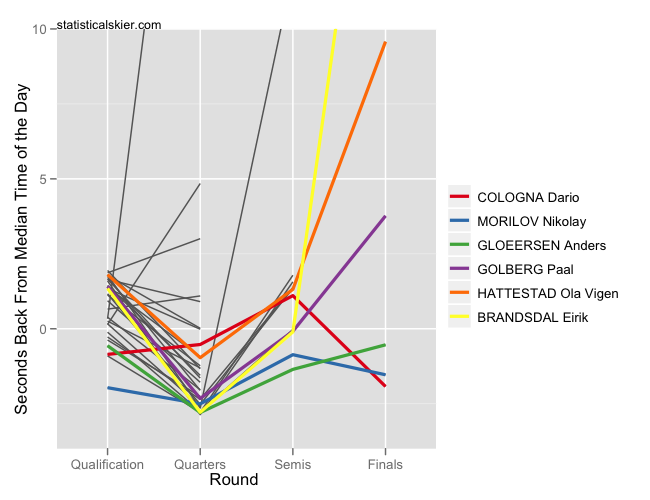 Some of the outlying times were cut off, obviously. Note the general increase in speed in the quarters, and then folks backed off again in the semis, it seems. Semifinal 1 was a fair bit faster than the other: 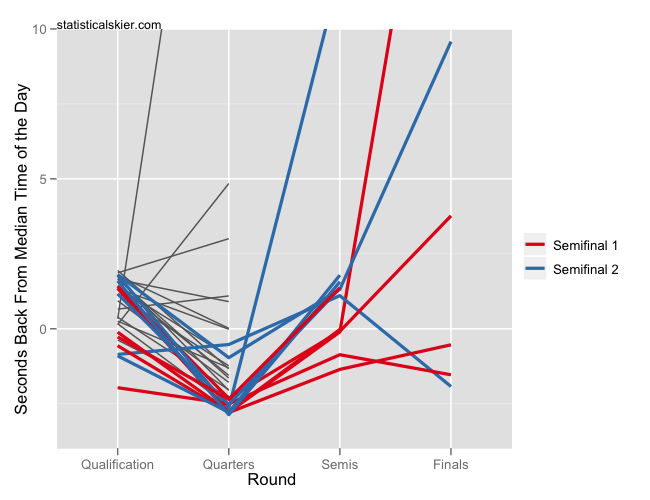 I had some technical difficulties with the women’s splits, which is a bummer, but that’s life.

But hey, three North Americans in the top ten? Not bad, eh? Are you wondering how often that has happened? Funny you should ask. Including yesterday, I can find 7 instances of North America placing 3 or more skiers in the top ten since 1992. Six are women’s sprint races, 1 is a men’s distance race.

That’s probably enough information for the savvy fan to pick up on some likely candidates. The men’s race was the Vancouver Olympic pursuit, of course. I want to emphasize that that is the only time since 1992 that North American men have put 3 or more skiers in the top ten. That is my new favorite way of describing how well Canada skied at that Olympics.

As for the women’s races, most of them occurred during the Beckie Scott/Sara Renner era, with either Chandra Crawford or Kikkan Randall being the third North American. (Daria Gaiazova and Milaine Theriault each snuck in there once as well.)

Further, given Kikkan’s bad luck with her poles yesterday, we could very easily have had two North Americans on the podium. That has only happened once since 1992, with Beckie Scott and Sara Renner in a World Cup sprint (admittedly it was a World Cup held in Canada, so it may not have been well attended).

The End of Winter? An Interview with Bill McKibben