First of all, I’ll echo Nat Herz’s big ups to Andrew Musgrave for finishing second at Norwegian Nationals the other day. I’ve always been a bit fascinated by Musgrave, probably because North Americans identify with any reasonably successful, promising skier not from Scandinavia or the usual European nations as fellow “outsiders”. So I’m always kind of pumped when he skis well.

But looking closely at this result, I started getting a little puzzled. The first thing that puzzled me was that I didn’t think that his WC results so far this season had been all that great. So I checked, and… 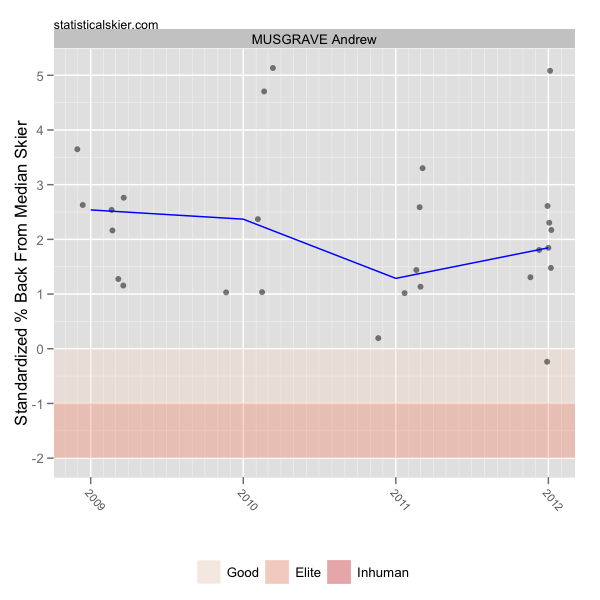 …generally my impression was correct. His results have been a bit worse than last season. But for a guy putting up resulting on the WC this far behind the median skier, second place at Norwegian Nationals seems out of place. So let’s look more closely at this result.

The first thing to note is that Martin Johnsrud Sundby won the race handily, beating Musgrave by 67 seconds or so over 15k. A quick glance at Johnsrud Sundby’s WC distance results this season reveals that they have (with one exception) also been significantly better than Musgrave’s. So maybe the field at Norwegian Nationals was somewhat weaker than usual? (Case in point, Alsgaard in 3rd.) Well, scanning down the results sheet reveals several other Norwegian WC regulars, so maybe not.

Let’s do this more systematically by comparing Musgrave’s performance in this race to his performance against the skiers in this field in the past: 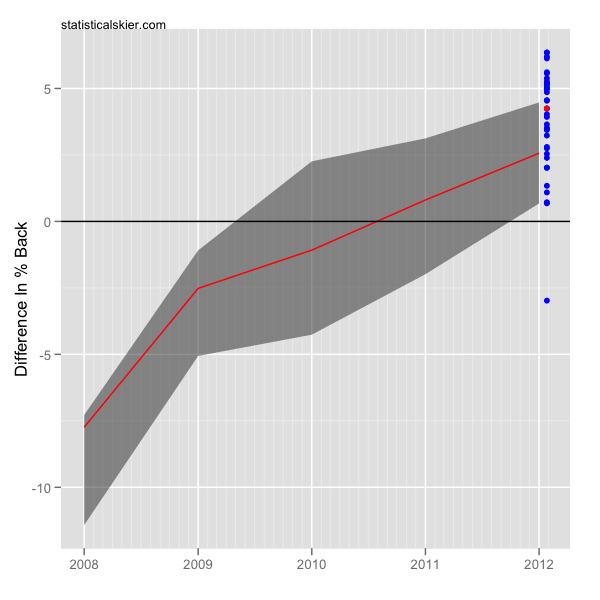 Higher is better in this plot (better for Musgrave, that is). The blue points are from this particular 15k from Norwegian Nationals. Note the one blue point way off by itself; that’s Johnsrud Sundby. The red line and shaded ares represent the general trend for Musgrave against the skiers in this field over time.

Clearly this race is at the upper end of Musgrave’s past performance level (red dot). And the overall trend has been moving steadily in Musgrave’s direction over the past few seasons. This suggests that Musgrave has been getting steadily better, on average, against the particular skiers in this field over time. So much so that I’d basically expect him to beat nearly all of them at this point on a regular basis.

Nearly all, of course, is not the same as all. I mean, I don’t put much stock in Petter Northug’s 40th place result in this race. So my read on this is that this field consists mostly of skiers that Musgrave has already shown that he’s as good or better than, and the remaining WC level skiers either crushed him (Sundby) or weren’t taking the race very seriously (Northug).

At the end of the day, though, Musgrave can still say he finished second at Norwegian Nationals, and no amount of complicated analysis on my part can change that.