Last in the series of most improved/unimproved we finally turn to the women’s sprinters: 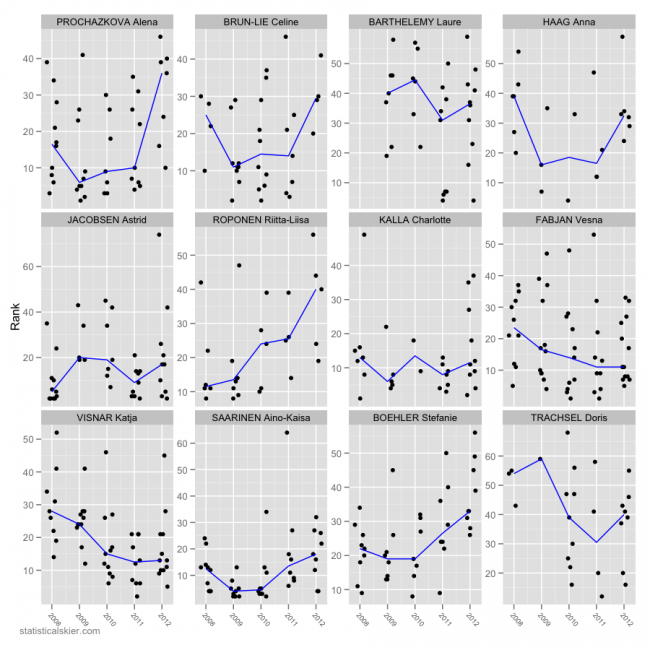 Alena Prochazkova took a major tumble this season in sprints. She had been a fairly reliable presence in the semifinals until this season, when she appeared to often have trouble qualifying. Celine Brun-Lie also saw a major drop-off, but the much reduced number of races that she did this year makes me wonder if she possibly had some issues with illness or injury.

Anna Haag joins many of the Swedish men as having a sup-par sprinting season, but sprinting wasn’t really her focus it seems, anyway. Laure Barthelemy did a lot “worse” this season, but the data is fairly clear that what really happened is that she had an unusually large cluster of excellent races last season, that were at least partly out of character for her. Most of her results this season seem generally in line with how she’s fared in 2009 and 2010.

Let’s consider the two Finns next, Roponen and Saarinen. There were also some injury issues here as well, but even so, note that both ladies have seen some declines for more than one season in a row now, so that doesn’t necessarily explain all of it. Roponen in particular was a fairly solid sprinter several years ago and has just really struggled since. Saarinen was an arguably pretty dominant sprinter for two seasons there in 2009 and 2010, but now has seen two seasons in a row of faltering results.

Stefanie Boehler deserves a mention as well as someone who’s had a few seasons in a row of troubles. She was never a really dominant sprinter, but things have gotten pretty bad the last two seasons.

Most of the other ladies here may seem like odd inclusions. Keep in mind that these “bottom twelve” were picked based on a blend of a few metrics (average result, best results, etc.) and I’m only graphing one of those. But their declines are certainly less stark.

As Cote Embarks on New Career, Stegeman Readies to Take Reins at NENSA