FasterSkierAugust 17, 2012
On Wednesday we completed our second Canadian Strength Test of the summer. We completed our first test on the second day of practice and now almost two months later it was time to look in the mirror again. 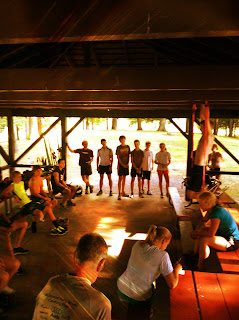 (The group just getting started)
As a group the results were positive. I have not calculated the scores yet but most of the athletes were comparing there results as soon as they had finished and almost all of them had improved. That’s what it’s all about !
After the strength test we headed out for a ski and some relay races ! For the first time this summer it was not on roller-skis !