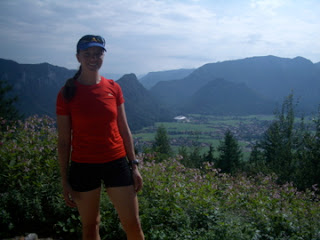 The end of the summer is pretty much upon us, and that means it’s time for our final summer camp…Germany!  This year has been pretty similar to our camp here last year: we spent two weeks in Ruhpolding and are now in Oberhof for one final week before heading back home.  The main difference has been that Ruhpolding, which was busy and a bit crazy last year with all the different teams around preparing for World Championships, was much quieter and not quite as hot (which was nice).  Even without all the other teams, we had a very effective and intense couple weeks training on Ruhpolding’s world-class venue.  Here in Oberhof, we’re spending mornings in the skihall testing skis and getting some on-snow time to work on technique, and spending afternoons cross-training and shooting.  It’s been a great camp so far, and, as usual, I figure the best way to convey what we’ve been up to is through pictures!  Look for my next update after our camp is over and I’ve settled in back in Alaska!