Editor’s Note: The following is a firsthand account from 17-year-old Warren Taylor, an incoming senior at Burke Mountain Academy in East Burke, Vt., who recently returned from his third trip to the academy’s annual Scandinavian nordic-training camp.

I first went to Sweden and Norway two years ago with Pete Phillips, Matt Johnson and a big group of skiers, and the next year with Kate Barton and Simi Hamilton. This year, with Kate, my coach at Burke, we were there for just under three weeks, arriving on June 11th and flying out July 1st. I have done camps with Burke for around four years now, but this past year was my first as a student there.

I’m not much of a city boy, but I did my best to guide us out of Stockholm. The multitude of unmarked one-way streets almost sealed our defeat. After finding the E4 highway, we headed north to Sollefteå. Tim Regan, Koby Gordon, Charlie Greenberg, Kate Barton, and I had all made it to Sweden.

Arriving in Sollefteå, we were a little disappointed that the go-kart track so heavily advertised looked like it had been abandoned years before. We instead took an early night before starting a five-day camp with the Sollefteå Skidgymnasium. This training camp took place at a five-star hotel right next to a seven-kilometer rollerski track overlooking the town. Next to the hotel was a pair of old wooden ski jumps built far off the ground and swaying in the wind above the trees.

We started the camp with short running intervals and a strength session where Robin Bryntesson, a former Swedish national team skier, impressed us all with his uncanny ability to walk around on his hands and balance on just one. After a few days of rollerskiing, an orienteering race and a brutal race down the river in the least hydrodynamic boat imaginable (pretty much a square dock), we did the famed Hallsta Test.

The two-kilometer uphill-running test went from the town straight up and past the hotel, almost to the very top of the mountain. We were told the record was 7:50, and even Swedish World Champion Johan Olsson was never able to break it. This was one of the tougher tests I’ve done, but I felt surprisingly good, getting a time of 10:09, just beat out by the younger coaches and a Swede named Jacob who was also my roommate during the camp.

Later in the week we saw U.S. national team skier Liz Stephen, who came up with Sweden’s Anna Haag and Emil Jönsson to do a 30 k skate time trial on the rollerski track. When we had a chance to talk with them, Emil jokingly told us that he had been putting in around 200 hours of training per month, but he had just gotten his ticket to Sochi, so now he wouldn’t have to train at all.

After a three-hour run through marshes, a few technique sessions with the Swedish coaches, and a nice afternoon in town playing some volleyball and basketball, the camp ended. We headed right to a town in northern Sweden called Östersund for a night of camping and a short roller ski before we went up to Bruksvallarna, a small town in northwestern Sweden that borders Norway.

We tried to find something to do on Midsummer, a national holiday for the longest day of the year at Östersund, but the guy at a tourist center directed us to a church up in the hills where he said there would be festivities. Unfortunately, the only thing going on was a Swedish sermon that felt quite uncomfortable to us as foreigners who didn’t speak the language. We had all heard about some crazy parties during this holiday, but the town was empty and we went to bed wondering where on earth the Swedish population had gone.

Bruksvallarna was a ghost town as well, and we searched in vain for its “downtown.” We eventually found that there was no downtown, just a little grocery store across from our cabin that did not open at all the first day, forcing us to drive half an hour to the next town over.

The next day we went out for an epic 4 1/2-hour run in the mountains up the road from our little cabin. We waded through knee-deep marshes and climbed through brambles and bushes out to a lake that we saw in the horizon from the first peak we climbed.

On the way back, we stopped by a small red building that we picked out in the distance. A little goat path ran along the patches of snow to this house, and we could see people hiking along it. It turned out to be a fully functional and a surprisingly nice waffle house at the top of a mountain.

I can honestly say I’ve never had a tastier waffle, probably because I ate it after four hours of running and hiking.

Unfortunately, we were only in Bruksvallarna for a day and a half, but we were all excited to drive west to the snow in Norway at Sognefjell. Although it poured during our first ski, I stopped noticing it after a while, just glad to be back on snow. However, afterwards I did notice how unbelievably wet all my clothes were.

We spent two nights camping near the longest fjord in Norway with a glacial waterfall running next to the campground. We then moved to a hotel I would argue is one of the best hotels on the planet. An all you can eat buffet, skiing all day, a drying room for all our clothes, and famous skiers at every corner. What more do you need?

We had three glory days at the glacier before heading back to the U.S. All we did was pile hours, sleep, and eat too much brown cheese. We encountered plenty of sun, making all but one of the skis radiant and rainless. Although the trails were deteriorating quickly as the snow melted, workers did a fantastic job of rerouting the trails so we were able to keep skiing on a 7 k loop.

After those three days, we began our odyssey back to the U.S. Following a seven-hour drive to Oslo, we camped on a soccer field by the highway. One more six-hour drive to Stockholm and we were halfway home.

We walked around the city for an afternoon and saw a sweet Red Bull competition. People were trying desperately to fly cardboard planes as far as they could off a ramp into the water flowing through Stockholm. Unfortunately, we did have some trouble finding our way back to the van.

I’ll miss the sunny days by the fjord, the scenic mountain runs in Bruksvallarna, the people I met, and, of course, the brown cheese at Sognefjell.

All the training and technique gains made during this trip will push me forward as I continue to ski. Hopefully I’ll be back next year to experience it all again. 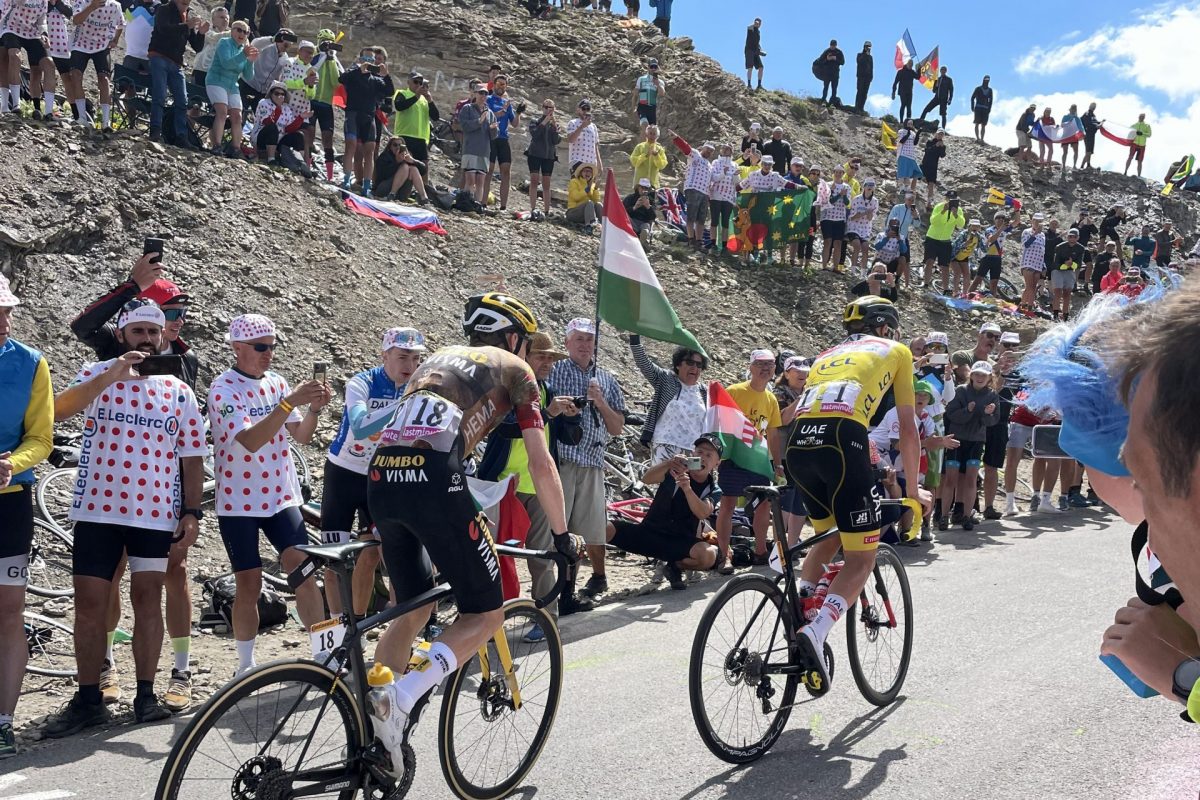