When the country began shutting down in March, sporting good retailers initially shuddered. It appeared many if not all sectors of the economy would bottom out.

“Everything was dicey in February and starting early March,” said Boulder Nordic Sport (BNS) founder Nathan Schultz about the onset of the Covid-19 pandemic. I was about to head off to Italy for the World Masters to wax there. Everybody in the Midwest was getting ready for the World Cup. And then everything got canceled. Things got serious really fast.”

Early on, Schultz decided to curtail BNS operations. He advised his employees to take advantage of the Federal Government’s Paycheck Protection Program (PPP) until he and his advisors could settle on a long-term plan of action.

For BNS and many ski purveyors, March can be a lucrative month – a time to create some financial padding before the dry season. By April, ski and winter accessory sales normally dip as the sun tracks higher in the sky. It’s a timeworn business cycle.

“This March and April were scary,” said Schultz who noted his March revenues dipped roughly 75 percent.“And in April, people were still kind of holed up and April is not usually a big month for us. But to have it go from a little bit to nothing is pretty hard. We were definitely scared about the end on the ski side.”

Back in 2018, Schultz merged BNS with Boulder Cycle Sport – a Boulder based specialty bike shop. Schultz’s close proximity to the bike side of the outdoor retail market was a front seat for the unexpected: a run on bikes during the pandemic’s onset.

In March and April, Boulder Cycle Sport’s bike staff agreed to reduce their hours by 50 percent. Doomsday scenarios were not so far fetched. But as the mercury rose and Colorado’s front range greened-up, Boulder’s denizens, known for their high output energy, became stir crazy like the rest of the nation under lock down. Schultz recounted, “everybody started riding bikes because that was all they could do. It went from zero to 500 percent.” With the uptick in sales, the bike staff transitioned to full time and any interested ski employees were offered hours on the bike side of the business. The experience in Boulder was no anomaly. Bike sales blew up across the nation. Mainstream media outlets reported that wait times for new bikes could be months. From kid-bikes, cruisers, road and gravel bikes, to fat tire steeds, they all were in high demand.

“The United States is facing a severe bicycle shortage,” was one noteworthy sentence from a May 18 article in The New York Times.

This was true for Boulder Cycle Sport where zero to 500 meant they could sell bikes as fast as they received them. According to Schultz, May, June, and July were all “crazy good”. “It went from ‘super scary’, to ‘wow are we going to be able to survive this?’ to ‘this is amazing we are selling everything that we have.’”

Boulder Cycle Sport does not simply cater to the high-end customer looking to drop 10 k on electronic shifting and featherweight carbon. “We definitely have everything,” added Schultz. “We want to be the neighborhood bike shop. So, we have all types of bikes.”

That bike spectrum spans starter kids bikes, to mid-price commuters, along with a full menu of price points for customers seeking an entry-level or pro-level race bike. No matter, the low, middle, and high end of the bike market was selling out. With brisk sales coupled with factory closures, supply chain disruptions became a common topic. Some bike models remain hard to come by as are some spare parts. “It is at the point right now in the bike world where the supply has been nearly exhausted,” said Schultz.

The exhaustion of the supply chain does not necessarily mean bike manufacturers will full-tilt-boogie ramp up production to meet demand. In an article and radio piece for Marketplace, Chris Rodgers, a supply chain analyst for S & P Market Intelligence said this: “The [bike] industry wasn’t running with lots of spare capacity to start with. What the industry doesn’t want to do is double its capacity to meet the increased demand, and then we turn round in the winter or next year when everyone’s got a bike and suddenly you’re left with a factory that’s too big and machinery or staff that aren’t being used anymore.”

In the short-run, we may see bike shortages persist as manufacturers remain cautious and steady in what could become a massive boom-bust cycle.

Retailers like BNS-Boulder Cycle Sport sell skis too. They know that as cycling use decreases during the winter, ski use increases. Needless to say, they have been informed by the cycling industry’s vagaries. That has shop owners like Schultz consumed with positioning themselves with just enough gear to meet a potential surge in demand for cross-country ski equipment.

Schultz received a positive data point early on. “On the rollerski side of things, it picked way up, about twice what it normally is,” Schultz said. “And it seems like more and more people are coming to us early and they are saying we want to get into nordic skiing this year and we don’t want to miss out. They are coming in at the end of August instead of October and November when they usually show up.”

The conversations on and off the record here at FasterSkier are the same regarding a potential boom in cross-country ski sales – bullish. One reason for the optimism is alpine areas are now revealing their winter operating procedures. Nationwide they include policies like online reservations for parking and skiing, limited if any food service, and a concerted effort to remain open and profitable by enforcing social distancing the moment a skier arrives, to the moment they leave. Industry wide, these are considered some of the best-practices to ensure financial viability and skier safety.

“People are going to be looking for other winter sports,” said Schultz. “Even if the alpine world were normal, I think the nordic world would still be blowing up because people are looking for a way to get outside and away from people. Backcountry skiing and nordic skiing are great opportunities to do that.”

Cross-country ski shops are figuratively grabbing the bull by the horns as they expect a similar dynamic to the bike industry: an increase in gear sales. However, there’s the hope that supply chains remain fluid. In other words, well supplied.

“The ski industry has had time to anticipate this, everybody I’ve talked to, they are bullish, they have raised production a huge amount and they are all in it,” Schultz said. “What we have been doing is we have been placing backup orders to bulk up and if we don’t sell what we think we will, we will probably modify those orders a little bit. I think all of those vendors are expecting it is going to be a big year and they are probably going to run out of product and they are trying to balance that equation — not get too bullish and have too much inventory because that kills. That is the biggest killer of retail, but we still need to have enough that we don’t run out.”

“It is going to be an interesting year, from what we are seeing from the cross-country side, which I am sure you will hear from everybody, everybody is betting on nordic,” explained Jeff Courter, Nordic Category Manager for Group Rossignol North America.

Courter said he expects all segments of the nordic category to grow, yet the greatest increase is expected to come from entry and mid-price point models. The same trend as in the bike market.

Pre-season orders for skis are received almost a year in advance of the following winter. Skis for 2020-2021 were likely pre-ordered in the fall of 2019. That allows suppliers like Rossignol, Fischer, and Madshus, all of which were contacted for this story, to ensure the raw materials for ski production are secured and demand is met.

“We have multiple factories in various parts of Europe,” Courter said. “The difficult thing with us, as I am sure most of the other suppliers are coming up against this too, with all of this massive increase in demand the problem is that the timing of this is a bit off. We have to put in all of our orders almost, not quite, a year ago, last fall over the course of last winter. All of our orders were in with the factories before all of the lock downs when the quarantine happened and, of course, now, the subsequent massive increase in demand.”

Courter said that Rossignol was able to keep production going through August, a time when much of Europe normally shuts down for holiday. “Since everyone already had six weeks off in the spring, all of our factories kept working to catch up and gain ground to be back where we should be in terms of delivery date and also just availability of product,” said Courter.

For now, sourcing materials for skis has not been an issue for Rossignol. The same can be said for Fischer. Steve Reeder, Fischer’s National Sales Manager for Nordic Skiing in the U.S. said in many ways Fischer’s supply chain is almost totally vertically integrated. Reeder used the example of their wood core skis as evidence.

“The wood core skis are built in our Ukrainian factory and that is literally a tree to ski factory, there is a wood mill on-site,” said Reeder. “You pull in the driveway and giant logs are being fed into a building where they are turning them into sheets for cores.”

Fischer’s higher-end skis, those with more complicated builds like the Speedmax which offers a lighter “Air Core”, are fabricated at Fischer’s plant in Ried im Innkreis, Austria.

Globalization has become the norm. Ski companies, which also produce boots, are well versed in navigating complex supply chains when sourcing material from outside their vertical chain. “Base material, that is probably one of the things they have to buy,” said Reeder. “I believe we have a good supply of that on hand. Most of that is Central European sourcing so there were not big concerns. We do some boots constructed in Europe, but we do a good chunk in the Far East, Indonesia, Cambodia, and those facilities got all of their componentry out the door and on the way to the factory before things shut down in Europe. So they were actually in very good shape and we have had stellar delivery on those products this year.”

Like Rossignol, Fischer took preseason orders for this winter’s stock nearly a year ago. Reeder also expects Fischer to have mid-season reorder capabilities for most of their lines. For some product, Reeder said stock vaporized in August when under normal circumstances he would have a supply buffer well into January. Fischer is now considering options to increase its production capacity on select models.

Norway based Madshus is known to operate a nimble factory able to produce small-batch ski runs. Bryan Cook, U.S. Sales Manager for Madshus, says they too are positioned to prevent ski scarcity.

The autumnal equinox just passed. In the market for news skis? This is often the time to begin sniffing around as dealers swap out spring and summer gear for snow sliding options. Time will tell if ski shops experience a supply pinch like bike retailers. It appears ski manufacturers have read the tea leaves. Optimism reigns. For now, it seems that optimism will be met with a solid supply of skis as the cross-country segment looks for a boost in sales. 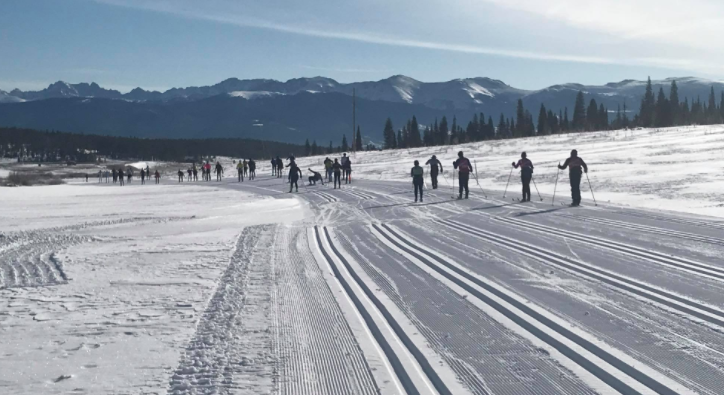