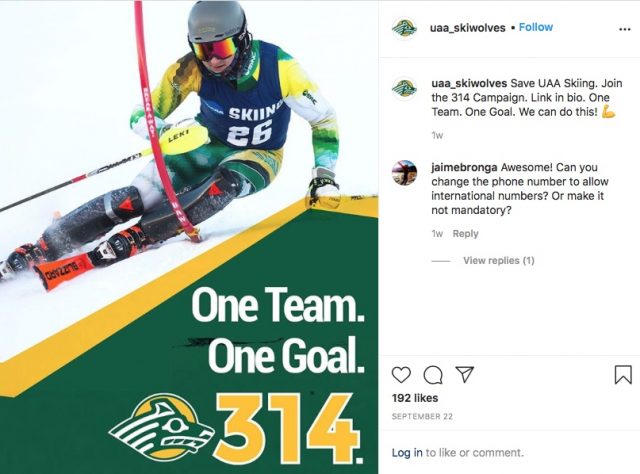 As previously reported, the decision facially saves the UAA nordic team: USST national team member JC Schoonmaker and his nordic teammates will not be without a college ski team after this school year. But the decision, if it stands, would spell the end of UAA as a nationally competitive NCAA ski program. Because team scores in NCAA skiing competitions are based on the combined points scored by both alpine and nordic athletes, a college ski team fielding only nordic athletes will never be competitive at the overall level against other schools with twice as many athletes scoring points.

(This objective mathematical statement is not intended to denigrate nordic-only schools like University of Alaska Fairbanks or Northern Michigan University, both of which claim a history of multiple cross-country Olympians and national team members. But as UAA Head Ski Coach Sparky Anderson has stated, his concern is that the Board of Regents’s action would “keep a Nordic-only grouping that can never be competitive in its quest for a National Championship.” Anderson also calls UAA “the canary in the coal mine,” and expresses a fear that cuts to UAA could lead to the loss of “the entire Rocky Mountain Intercollegiate Ski Association. Once the RMISA is gone, the Eastern Intercollegiate Ski Association is soon to follow.”)

The Board’s decision left ski team supporters some reason for hope: If they can muster private funding for the next two years’ worth of operating expenses in the next few months, “The board will consider reestablishing men’s and women’s alpine (downhill) skiing … .” (It remains unclear whether the fundraising deadline is February 1, 2021, or the Board of Regents meeting at the end of that month, February 25–26. This site suggests a deadline of February 1, 2021.)

The UAA alpine skiing team has annual expenses of $314,000. Two years’ worth of operating expenses is therefore $628,000. Of the total amount required at least half must be raised in the form of cash in hand, according to the Board of Regents; the other half can be firm pledges. 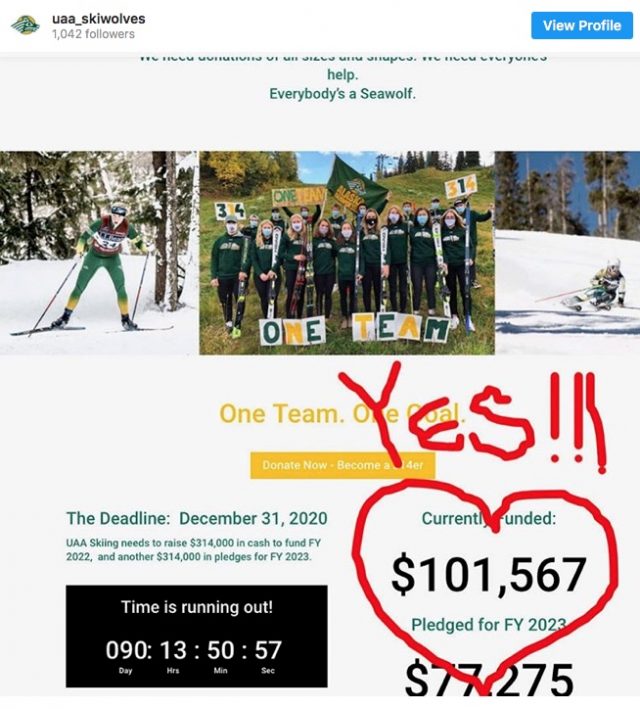 Ski team supporters have been busy. They have a website, Friends of UAA Skiing, which is raising awareness and soliciting funds. Supporters have launched what they term “The 314 Initiative”: “We are asking for 314 individuals, groups, businesses, or interested parties, to invest $1000 or more this year, and pledge $1000 for the following year. This collection of distinguished parties will be The 314ers. A group of highly motivated ski racing backers who will not only save NCAA skiing at UAA, but save NCAA skiing across the country. We must demonstrate to college administrators across the country that an Olympic sport like Skiing has a place in collegiate athletics.”

Backers will receive “an authentic sweatshirt” if the fundraising campaign meets its goal. Donations will be returned, less online processing fees, if the full goal is not met.

As of Monday evening, ski team supporters had raised, in round numbers, $113,000 in cash for fiscal year 2022, and $86,000 in pledges toward fiscal year 2023. This is roughly one-third of the way towards the total amount required. The first $1,000 contribution came from Anderson’s 14-year-old daughter, the Anchorage Daily News reported.

The role of “314” in the fundraising campaign has a significance that goes beyond the happy accident of a budgetary line item. If you’re a fan of Buffy the Vampire Slayer, the number connotes the 314 Project, which created Adam and other demonoids. If you’re a fan of the musical stylings of Nelly, the number evokes his St. Louis demesne, via metonymy from the city’s area code. And if you have any sense for geometry, it calls to mind the mathematical constant π, the ratio of a circle’s circumference to its diameter. Pi is an irrational number, and its decimal representation has no end, but its first three digits are, of course, 3.14.

The imagery of circles is appropriate for the UAA ski team, whose alpine skiers carve precise arcs between slalom gates. It is also sadly apposite in the sense of “history is circular,” as the UAA ski team once more finds itself fighting for its survival. Time will tell if, unlike π, their efforts are rational and eventually come to an end.

The Devon Kershaw Show: The Highs and Lows of Altitude Training with Alex Hutchinson