Crash and Burn in Falun:

News from around the scene has some World Cup skiers on the mend after Saturday’s mass start races in Falun, Sweden. A few notes from the men’s and women’s 10 k and 15 k mass start classic race: there were numerous crashes, some serious.

According to an Instagram post from British skier Andrew Young, he crashed on the fourth lap of the men’s race. “I slid into and through (!) the wooden advertising banners and hit a wooden post on the other side.” On Twitter, Young posted data from his day racing that illustrated he hit the wooden post at 42.7 km/h (25 mph). 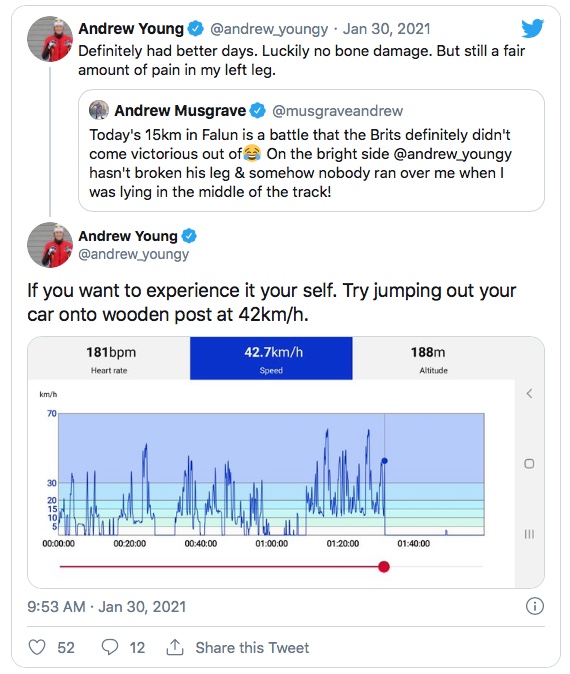 The initial fear was that Young had fractured his femur. X-rays ruled out a bone-break, yet he has experienced pain and swelling in his left leg. He aims to begin training at the end of this week.

This carnage, along with the numerous spills suffered from other athletes, prompted discussion about course safety in Falun. Some called for “netting” to catch athletes sliding of course in precarious situations much like we have grown accustomed to in high-stakes alpine skiing speed events. Devon Kershaw, in a podcast for FasterSkier, explained that the mass start course used in Falun was simply too easy, and allowed for congested skiing. In other words, no terrain feature, like a bury ling climb, could separate skiers. Skiers trailing near the back of the pack could catch up on the downhills where the crashes occurred.

An earlier version of this story reported Kerttu Niskanen of Finland had broken a bone during a crash on Saturday. Although she did suffer the injury, it was not caused by a crash.

In better news concerning athletes who have suffered a catastrophic injury and returned with a fury, U.S. Ski Team athlete Hannah Halvorsen was featured in a solid podcast interview on the “We Are Superman” podcast. It’s a good listen for anyone looking for some inspiration regarding resilience. FasterSkier has covered Halvorsen’s return to skiing as well as featured a first-person narrative of her struggle with body image.

You can find the podcast episode here.

On Tuesday, the World Anti-Doping Authority (WADA) released a press release stating they would not be appealing the December decision from the Court of Arbitration for Sport (CAS) relating to its case against RUSADA, the Russian Anti-Doping Agency. In that December decision, CAS reduced Russia’s ban from international competition from four to two years. Much buzz surrounded the weakness of the CAS ruling.

Tuesday’s statement from WADA recognized they were unlikely to be successful in appealing the ruling to the Swiss Federal Tribunal.

“WADA was disappointed that the CAS Panel, based on its own assessment of proportionality, decided not to impose all the consequences that WADA sought (and not for the full four-year period),” claimed WADA in the press release. “However, the grounds of appeal to the Swiss Federal Tribunal are limited to procedural matters such as jurisdiction, the composition of the Panel and the right to be heard. The Swiss Federal Tribunal does not conduct a review of the merits and would therefore not interfere with the Panel’s assessment of the proportionality of the consequences. As a result, and following unanimous advice from in-house and external legal counsels, WADA strongly believes an appeal would have served no useful purpose and decided to refrain from doing so.”