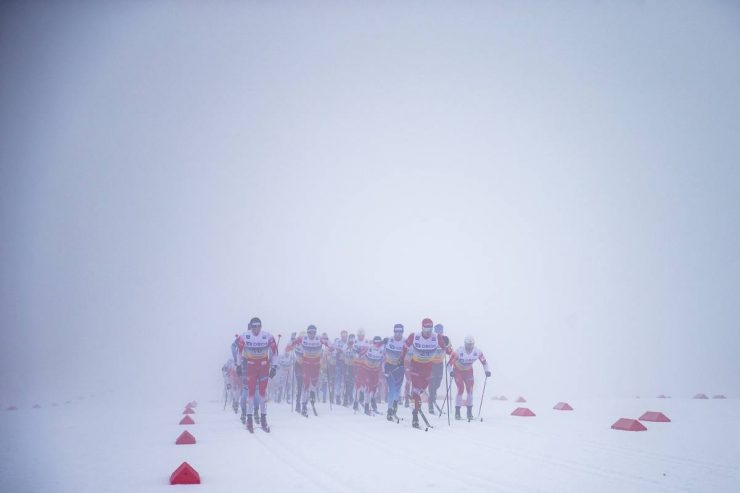 Oslo in late winter – it’s be hit or miss. Fog. Bluebird. A maritime climate, with plentiful moisture in the air, a slight drop in temps can morph the Holmenkollen ski complex into a ping-pong-ball-world. Athletes were mere shadows striding into and out of view on a foggy- drizzly day at the Holmenkollen. As spectators were limited to trail side spots as the main stadium was closed due to the Covid-19 virus, for some concerned, it was a slog for the 50-kilometer classic to close out the European portion of the World Cup. (That’s right- it’s ocean hopping time for the entourage post-race as the World Cup moves to North America.) 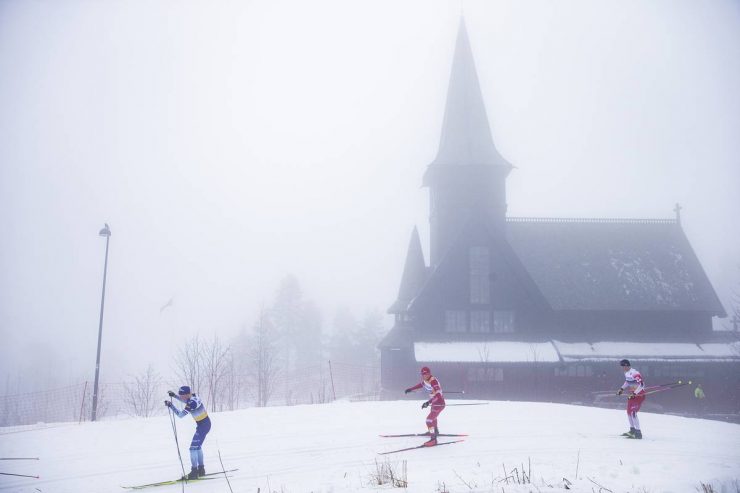 Let’s cut to the chase. The main action over 50 k involved main pack attrition. The sharp end pack remained robust with skiers through 18 k, as skiers passed through the main stadium as Sjur Røthe of Norway came through first. That much didn’t matter beyond a minor foot note in the day’s narrative, as a handful of Norwegian’s took pace leading chores throughout the race.

On a day that many would have preferred to practice their own personal art of hygge, the main pack remained 20 deep at 30 K. The top-20, which contained all the key skiers, was separated by a scant 5.6 seconds. A group that big surely provided its own sense of Norwegian coziness despite the high heart rates. Of those 20 athletes, four were Russian, two Swedes, one Finn, one Swiss — the rest Norwegians. Charging through was overall World Cup leader Alexander Bolshunov. There was Emil Iversen, Pål Golberg, Martin Johnsrud Sundby, Simen Hegstad Krüger, Didrik Tønseth, Hans Christer Holund, and Johannes Høsflot Klæbo. Bundled in there was Dario Cologna of Switzerland, and Iivo Niskanen of Finland, who was lucky enough to have fans and there chanting “Iivo-Iivo”. 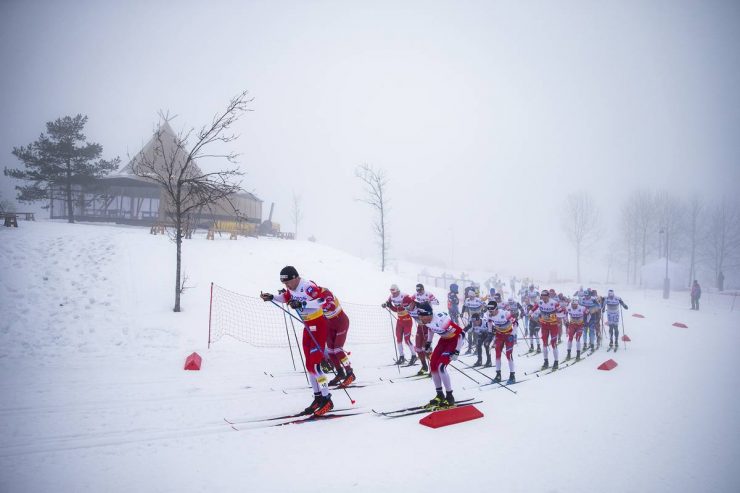 Start of the race: Roughly 50 k to go. (Photo: NordicFocus) 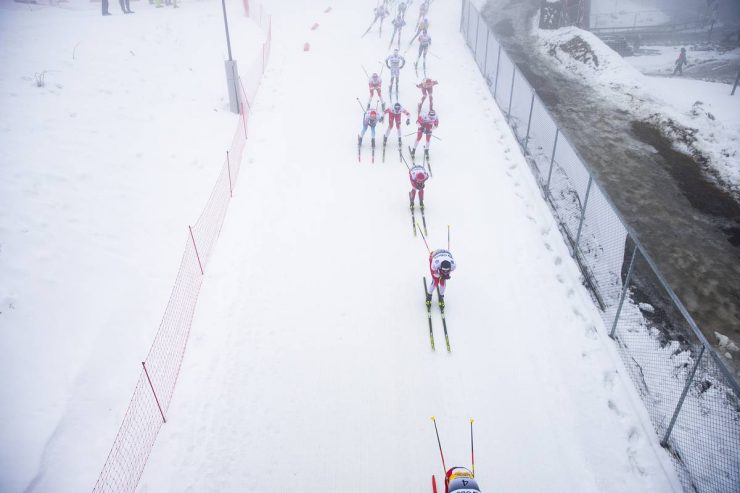 With so many skiers clustered together, and the tactics less explosive than simply see who could hang on, the camera shots at each turn of the race through the main stadium turned to the spare classics skis racers had the option of swapping into. The lure of fresh kick or speed, seemed like tempting race candy. Halfway through, at roughly 25 k, it appeared that Golberg was one of a few of the main contenders opting for a fresh pair. The rest skied through the ski exchange zone, at least content for another lap with their boards.

Lapping through at 30 k, scores of skiers opted for fresh kick and glide. Post-ski-exchange,  the front pack soon coalesced into two orderly lines, like marching soldiers, as they crested a hill roughly an hour twenty into the race.

No matter any skiers herculean efforts to pop off the front, this was a simply a group affair. Any potential burst of speed, or pulse for bonus points, was absorbed. Ski speed or kick, seemingly equalized among the scrum. The question simply was this: which human engine would last the longest? Forty kilometers in, and the front group had winnowed 13 skiers separated by about seven seconds. Bolshunov led, followed by Røthe and Cologna. 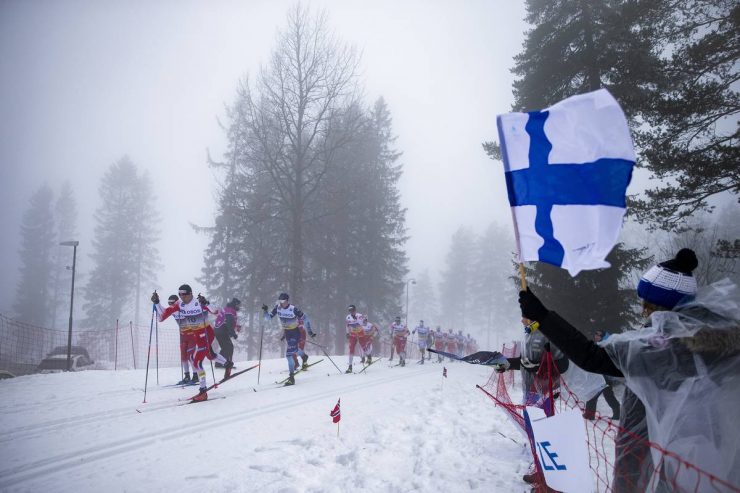 Then it was two — barely. Just after the two hour mark, Krüger spiced up the pace. Striding and double poling in earnest, at 47.7 k. Krüger was only shadowed by Bolshunov, as the Norwegian’s late in the race move stuck. Røthe, Cologna, and Holund fell off in third, fourth, and fifth, respectively, to just over 11 seconds back.

Two stallions double poling into an eerily silent stadium. That was probably not such a bad thing (although fans present are always better), as one can imagine the fans falling silent had they been there in droves. Russia’s Bolshunov out sprinted Krüger to win in 2:08:05.3, 0.9 seconds better than the second place Norwegian. 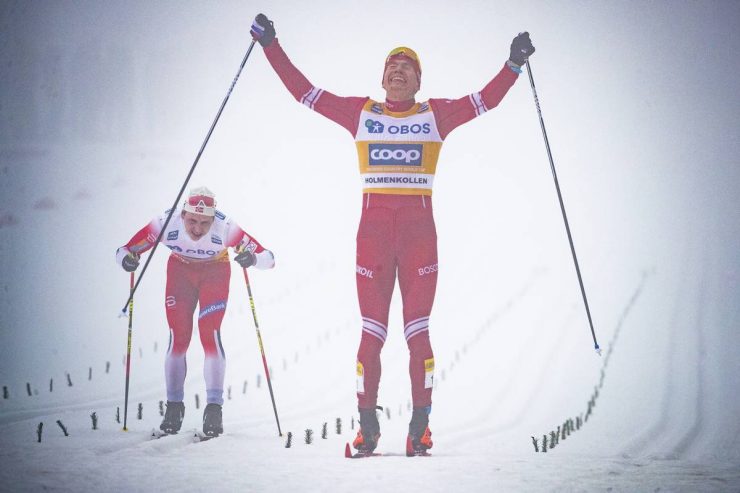 Yellow bib and the Oslo 50 k win: Alexander Bolshunov and Simen Hegstad Krüger, down to the wire. (Photo: NordicFocus) 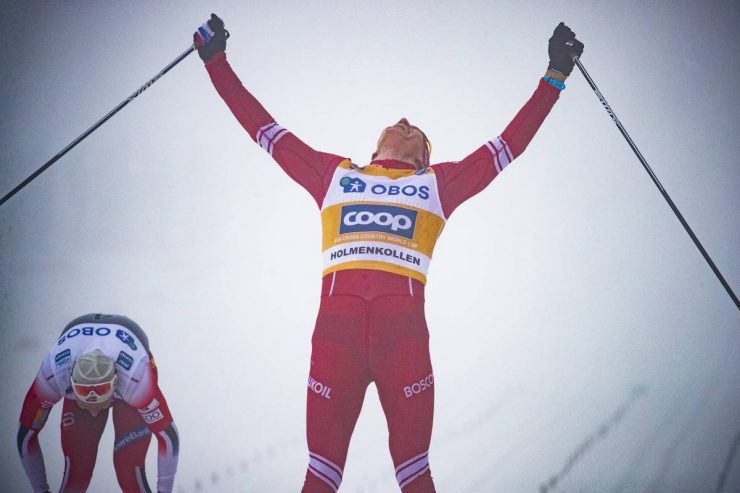 “Me, the team and the skis were all working together perfectly today and I am very happy to win here,” Bolshunov said after the race. “Because compared to Trondheim, where I had no possibility to do something with my skis, it was more important for me to win here today.”

That Trondheim race mentioned by Bolshunov was the final stage of the SkiTour 2020 in which he lost the overall due to poor skis.

For Bolshunov, this made for back-to-back 50 k classic wins in Oslo. Last season he won in a final sprint that saw Russia sweep the podium. And for Krüger, this was a career best in a 50 k race. He was seventh in last season Oslo 50 k. Lastly, when it comes to classic skiing, this has been a breakout year for Krüger – he is an athlete we had often considered a skate specialist.

“In the last lap I heard that I can fight for the podium and this is where I got some more energy,” Iversen said to FIS. “So I am really happy to stay 50km all in because I am not known as the best athlete in our team so it is nice for me to show the coaches and all that I can stand a hard and long 50km. I am really proud of that.” 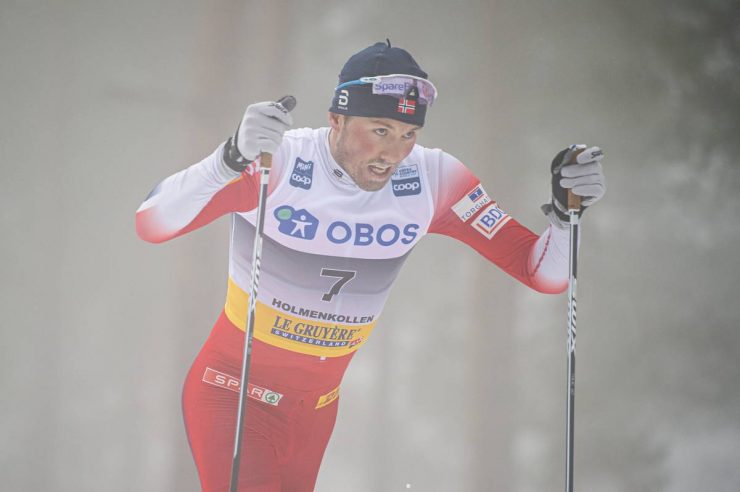 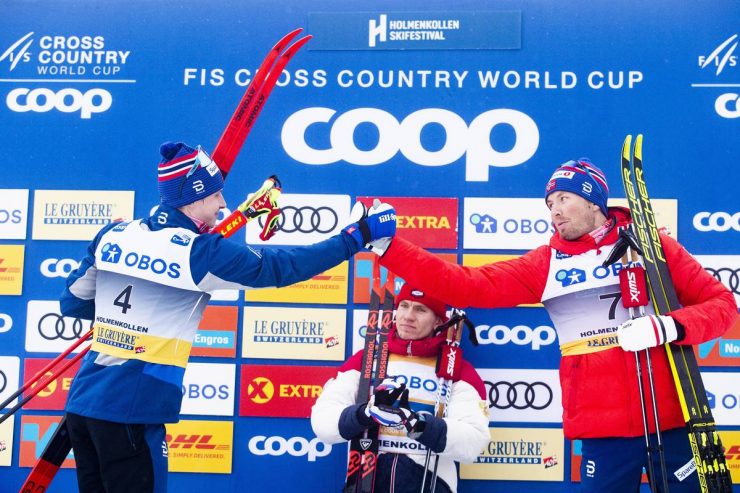 “It was one of the toughest races I’ve been in,” Martin emailed. “I made a blunder by selecting zeroes and paid for it in the first lap. I used my one ski exchange as soon as I could at 6k with 44k to go. I spent a large majority of the race skiing by myself in windy conditions with no racers in sight. I am thankful for the spectators that cheered me on many k’s. 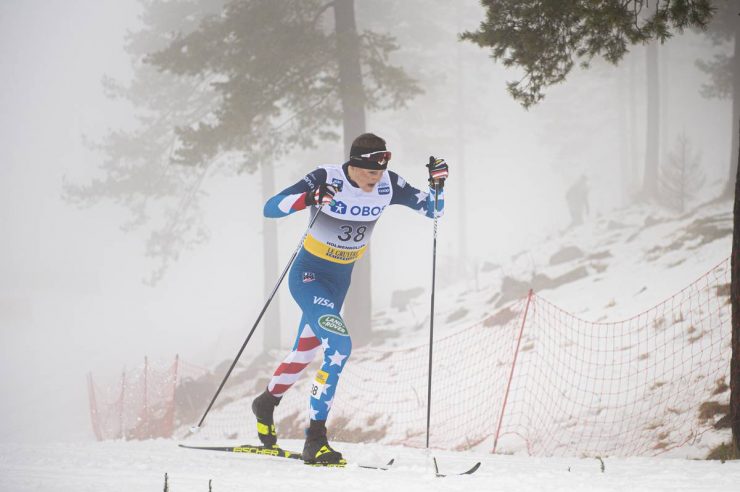 Lustgarten reiterated the day’s difficultly.
“The race today was absolutely brutal,” Lustgarten explained in an email. “The conditions were not as tricky as we thought because it was just rain and super saturated wet tracks, instead of the new snow they called for in the morning. Still the tracks were glazed wet and breaking down, and also got really slow after a lap or so because of the fluoros fading from the skis. I had amazing skis for my first pair.
“I was able to stick with the lead pack for about 1.5 laps (we did 8 laps of 6.2km). I felt really good, my skis were amazing, fast and great kick. I started to fade a bit on the steep climbs and lost contact with the main front pack. Basically after that I skied alone or around a few other skiers for the rest of the race. The wind was tough being alone, and just forcing myself to ski well and try to keep my pace up. I swapped skis after 4 laps and unfortunately had a bit less kick on my second pair, in addition to fatigue and glazed tracks I found myself herring boning most of the steep climbs, but they were nice and fast for a few laps. My triceps started cramping about 20km earlier than most 50s, with about 30km to go. That was uncomfortable and not a great sign. My second half of the race was more about holding on and trying to finish the race instead of racing as hard as I could. I find at Holmenkollen it takes everything I have to just try and ski ok and finish the race because of how hard the course is. I was proud to finish today in such challenging conditions, even though my fitness didn’t feel amazing. Overall I was really happy with the skis and our wax techs deserve a shout out for that!” 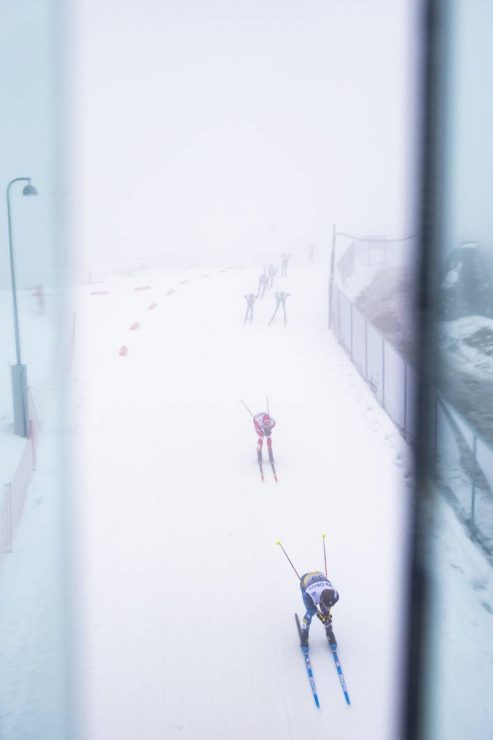 “This was a very tough weekend for our team, but I’ll say this first: We’ll be back next year to swing again,” U.S. World Cup Coach Matt Whotcomb explained. “Whether we are coaches or athletes, the process of figuring out this race is why we do this job. It’s just so difficult here, and we love it. We’ve been near the top and the bottom on the same weekend, and in each of those cases, the result is always over-shadowed by the experience with the crowd. This is a major-league sporting event in these woods, with crowds in the tens of thousands, strapping speakers to trees, screeching trumpets, blazing fires, and cheering for everyone. In fact, they cheer extra-loud for athletes who aren’t having a good race. In terms of uncracking the Holmenkollen, the courses, conditions, and 30/50k race formats are so difficult that anything but near-perfect skis, fitness, and health will put an athlete way off the mark. We just didn’t pull any triple cherries this weekend. We were also hit by a cold that caused us to scratch Sadie on the morning of her race, and it lead to David pulling out after three laps. I had the chance to talk to David in the feed zone as things were starting to go sideways, and I told him to pull out. He said, “But that’s not what I do.” It’s not my style either, frankly, but it would’ve been a season-ender for him to finish the race ill. There was no other way; he was pale green. Just behind David on the course, Ian was puking (on his birthday), so he had to drop out, too. So, like I said, it was a tough weekend. And while I support David and Ian in their need to drop out of today’s race, I’m also very proud of Ben and Adam for finishing this beast.” 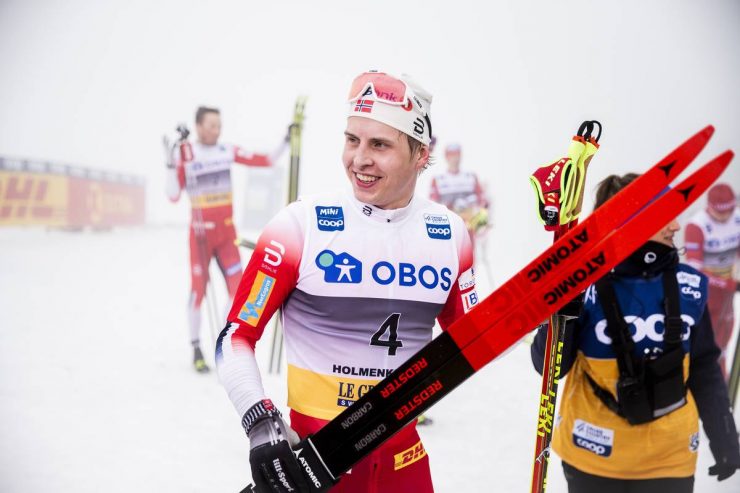 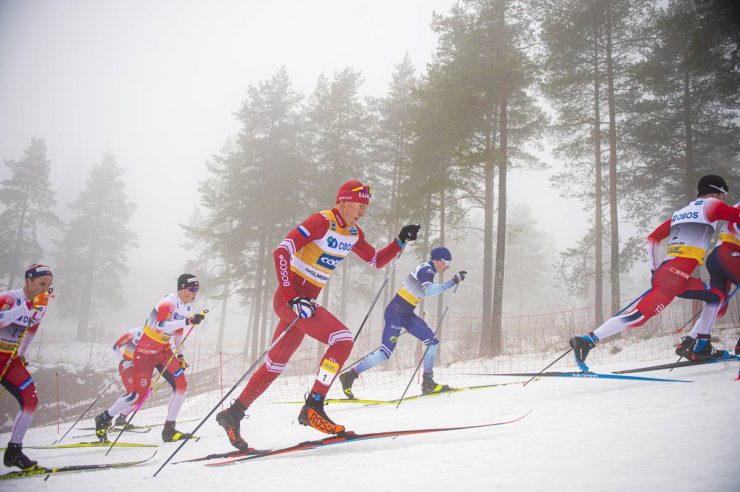 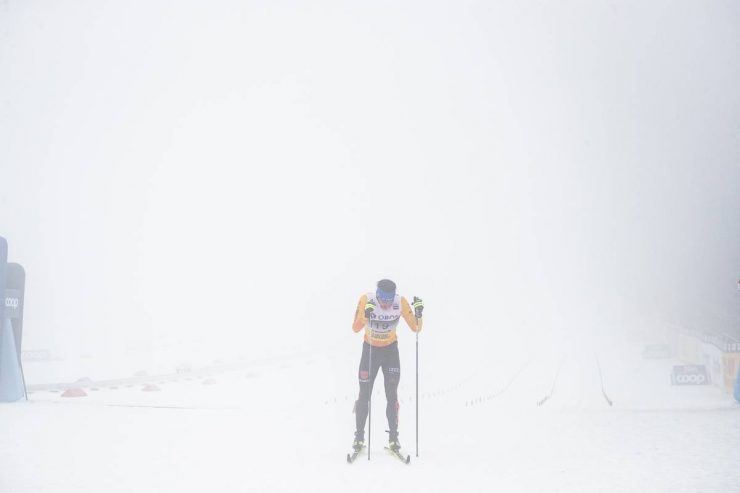 A lonely day at the Holmenkollen for some: Germany’s Jonas Dobler. (Photo: NordicFocus) 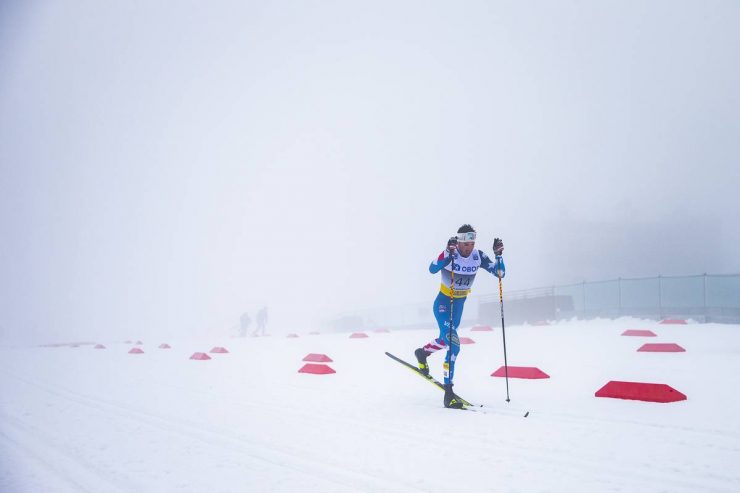