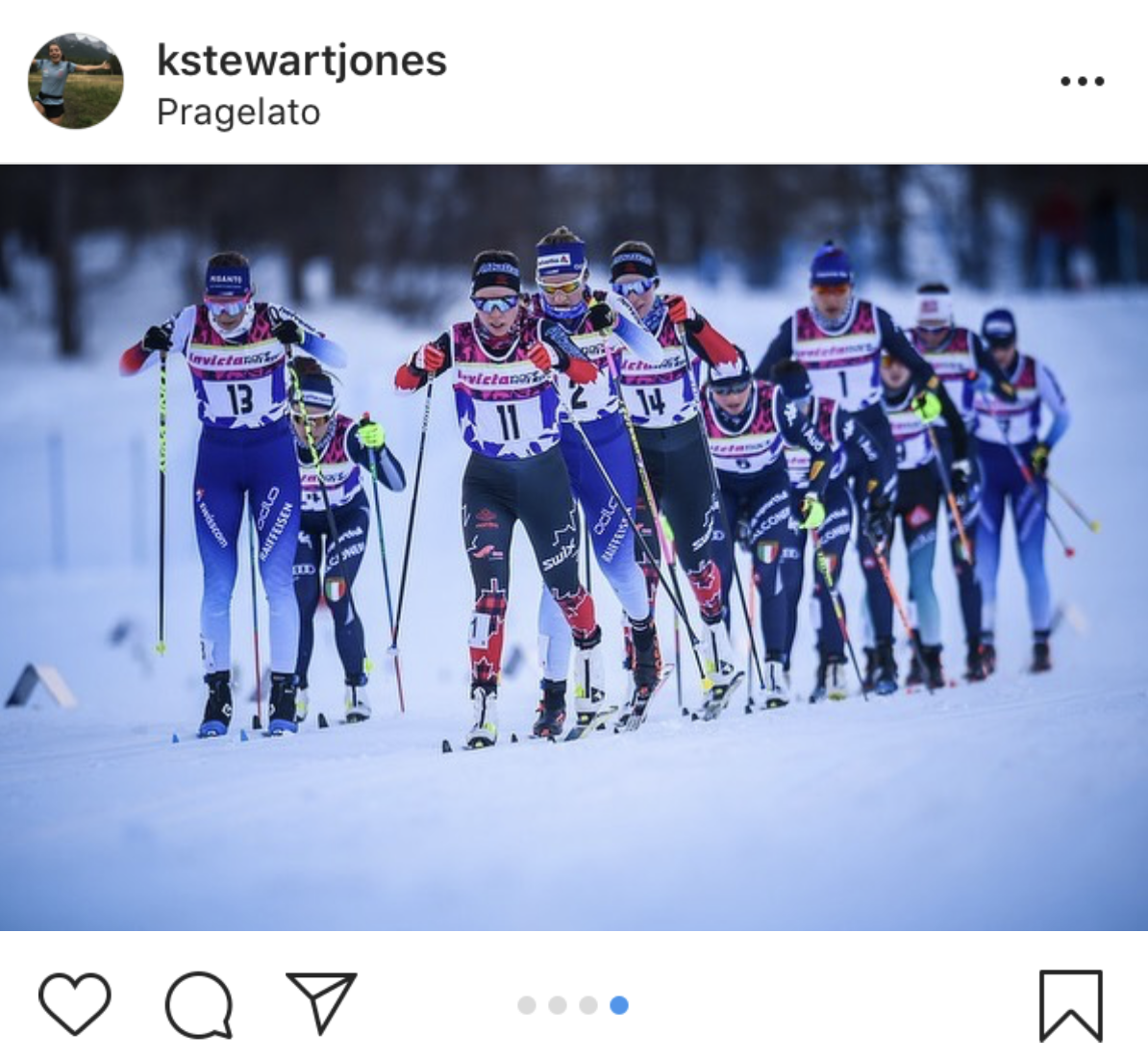 Katherine Stewart-Jones leads the mass start on the way to a Canadian 1-2 at the OPA Cup in Pragelato, Italy. (Photo: Athlete Instagram, credited to @damianobenedettophoto)

Canada took a step back from the World Cup circuit this weekend and focussed attention into development series. As the country tries to build momentum in a post Alex Harvey world, the focus has moved away from World Cup podiums and towards a consistent presence in the top 30. The road to the World Cup goes through local and regional races on the way to national/continental races.

One of the development challenges in Canada is size. The second largest country has roughly the same population as California. Skiers from Newfoundland live closer to Holmenkollen than Whistler Olympic Park.

The Continental Cup series in each FIS ‘continent’ is the top level race series below the World Cup. Canada has the NorAm series. The USA has the SuperTour series. France, Germany, Italy, Slovenia, Switzerland, and Austria share the OPA Cup series. This distribution of ‘continents’ may seem odd, but remember that the combined land area of the OPA countries is equal to British Columbia and Nova Scotia. Canada has three more time zones separating those two provinces.

As part of an effort to reduce travel demands on developing skiers in Canada, Nordiq Canada has been making changes. For the second year in a row, Westerns is not a NorAm event, but a regional event (albeit for a region larger than continental Europe). While this eliminates one east/west flight for eastern-based skiers, western athletes from Saskatchewan, Manitoba, Nunavut, North West Territories, and the Yukon still have a flight to pay for.

8 young Canadians are in Lausanne, Switzerland, for the Youth Olympic Games. Another 8 were in Pragelato, Italy, for an OPA Cup event, where two Canadians won. If you know someone who doesn’t think winning an OPA Cup is a big deal, listen to what Devon Kershaw and Jess Cockney think in the latest podcast. Cockney may ‘only’ have four top 10 results on the World Cup before he ‘retired’, but he did win a combined NorAm/SuperTour earlier this season.

As Cockney reminded us in the podcast, development comes in cycles. It is hard to remember that ten years ago Norway needed to borrow a biathlete to make a mens relay team for the Olympics, the same Olympics when Canada had four different men with top 10 individual finishes. The glory of being at the top of the roller coaster comes with an unseen cost of getting a big machine up a steep hill. This weekend was part of that climb. 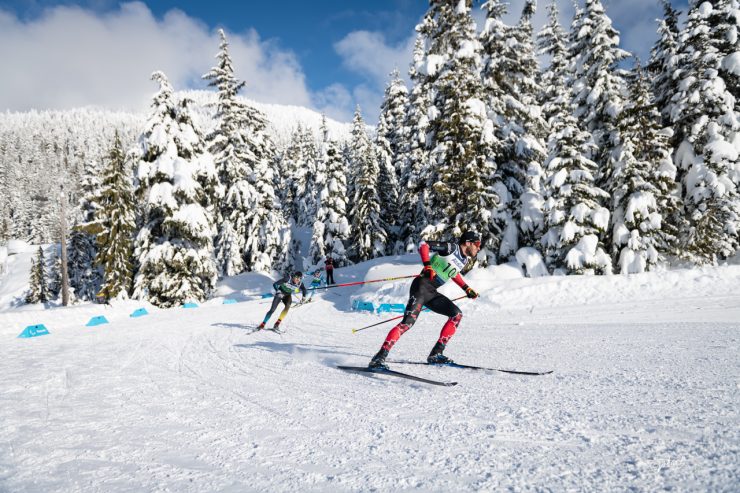 Russell Kennedy leads the A final out of a corner that Petra Majdič remembers well from the 2010 Olympics. (Photo: Weisheng Wang)

Western Canadians was held at Whistler Olympic Park, with over 250 athletes competing for titles under a slightly changed name: Western Canada Cup. Record-setting snow storms and very challenging driving conditions should make for some good stories from the athletes who completed the trip.

On a spectacularly sunny Friday, AWCA’s Annika Richardson won the 1.3km classic sprint on a course that will bring back Olympic memories for older fans. Richardson’s 3:16.95 put her 1.45 seconds ahead of Benita Peiffer and 2.11 seconds clear of Elizabeth Elliott which made an all-AWCA podium. Peiffer and Elliot are in their final season of U20.

Bragg Creek’s Sebastien Boehmler-Dandurand edged out Canmore’s Russell Kennedy by 0.28 seconds to win the men’s 1.3km in 2:41.37. Telemark’s Gareth Williams grabbed third at 1.90 seconds, well ahead of his brother Ian in 4th who claimed the top U20 finish.

On Saturday, WOP showed the changeable weather with falling snow and soft tracks after a heavy overnight snowfall. In the men’s 15km classic interval start, Kennedy confirmed his favourite status with a win in 46:57.6, 45.3 seconds clear of Gareth Williams. AWCA’s Jack Carlyle grabbed the bronze at 1:20.3 back. Ian Williams was again 4th overall to take the U20 win.

In the women’s 10km, Emily Nishikawa showed why she was Canada’s top distance skier on the World Cup last season with a 35:42.4 time. Sprint winner Richardson claimed second, 2:51.4 back followed by AWCA teammate Sadie White at 3:09.0 Whitehorse’s Amanda Thomson was 5th at 3:45.5 to take the U20 title.

Sunday continued the domination by the favourites. Nishikawa won the 15km free mass start in 43:06, 2:07.6 ahead of Elliott and 2:13.8 ahead of Revelstoke’s Gina Cinelli.

“It is fun to be back in Canada and see how well people are skiing here!,” Kennedy wrote to FasterSkier. “Whistler is so pretty but it is super tricky with weather. Always unpredictable but really good for testing skis I don’t use that much.”

While the regional field may not have been as deep as MSA will be, the return of Nishikawa and Kennedy from World Cup period 1 gave nearly 300 athletes a good vision into what the next level of competition looks like.

The organizing committee has photo galleries. 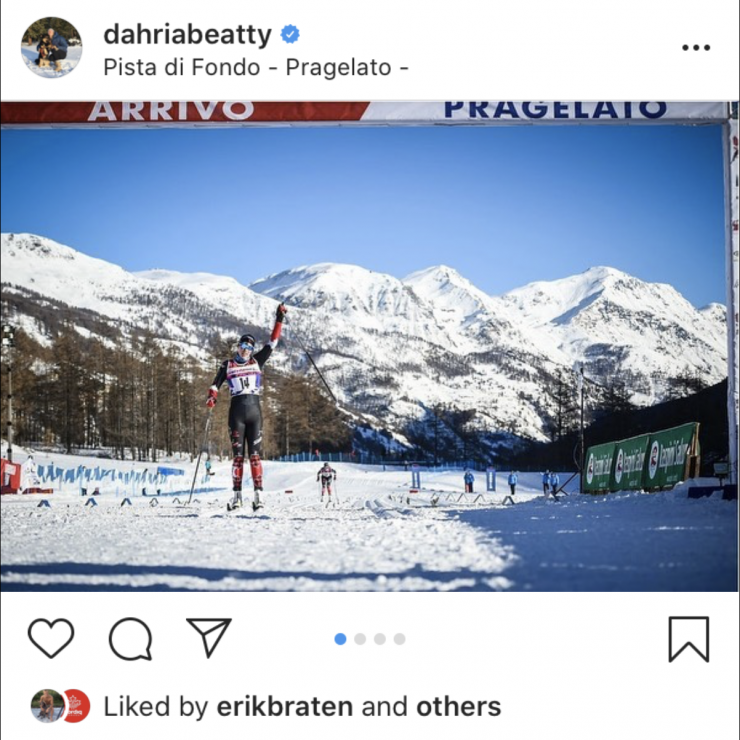 While the western athletes were at the 2010 Olympic venue, eight Canadians made the trek to the 2006 Olympic venue to compete in the OPA cup. Dahria Beatty won the Saturday’s mass start 15km classic in 49:09.0, 8.1 seconds ahead of teammate Katherine Stewart-Jones. Italy’s Sara Pellegrini was third at 38.7.

“Being on the podium for both races is a huge confidence booster going into next weekend’s World Cup races, especially because the courses in Pragelato are World Cup level,” Stewart-Jones wrote in an email. “With Dahria also on the podium the last two days I couldn’t be more excited with how well our Canadian Women’s team is performing.”

Stewart-Jones is targeting the Scando Tour, starting in Åre, Sweden, on February 18th and ending in Trondheim, Norway, on the 23rd.

“The courses here in Pragelato are awesome which made for some good hard racing this weekend,” Beatty wrote after her third OPA podium of the season.
“I had only done one distance race this season before this weekend so it was really good for me to get some high caliber race kilometres in. My distance skiing is feeling strong right now so I am excited to do a few distance World Cups in the next month and do some classic skiing since Saturday was also my first classic race of the year.” 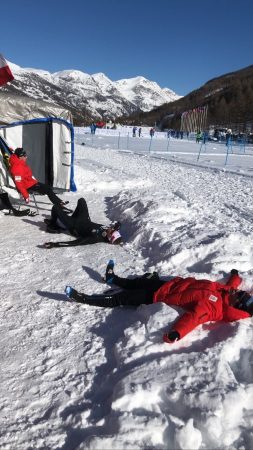 Thompson is a sprinter by preference and was in Pragelato with Oberstdorf’s sprint in mind.

“The main focus for me this weekend was to get some longer really hard work in, which a 1.5 hour 30k definitely accomplished,” Thompson wrote. “I think the OPA’s are a great chance to find near World Cup level racing and for those who are looking to get a bit more experience at that level they are a great challenge for those looking to make a jump in their racing.”

The OPA cup is a continental cup series (like the NorAm and SuperTour) and the field is studded with athletes who move up and down between the World Cup and this series. The athletes best known to North Americans would probably be France’s Richard Jouve (8th here) and Italy’s Elisa Brocard (12th and 2nd).

Head coach Erik Bråten is with the team until Oberstdorf and back to Canada briefly for MSA Trials. He is excited with the progress this season and happy with the visit to Pragelato.

“What I take away is that we have some young athletes that is getting great race experience outside of North America, and a couple of girls that really showed a high level even in a tough training week.”

The YOG started off with a ‘cross country cross’ event including obstacles on Saturday, followed by the more traditional events: Sprints Saturday, classic mass starts Tuesday, and a mixed relay on Wednesday. The American athletes outshone the Canadians over the obstacles on the first day, taking 4th in each gender before working up to podiums on Tuesday. Full results for the event are here.

While this is an important event in young athlete’s lives’ and there have been some great individual results, fans and media alike have to be careful not to apply expectations and pressure to the developing minds in those developing bodies.