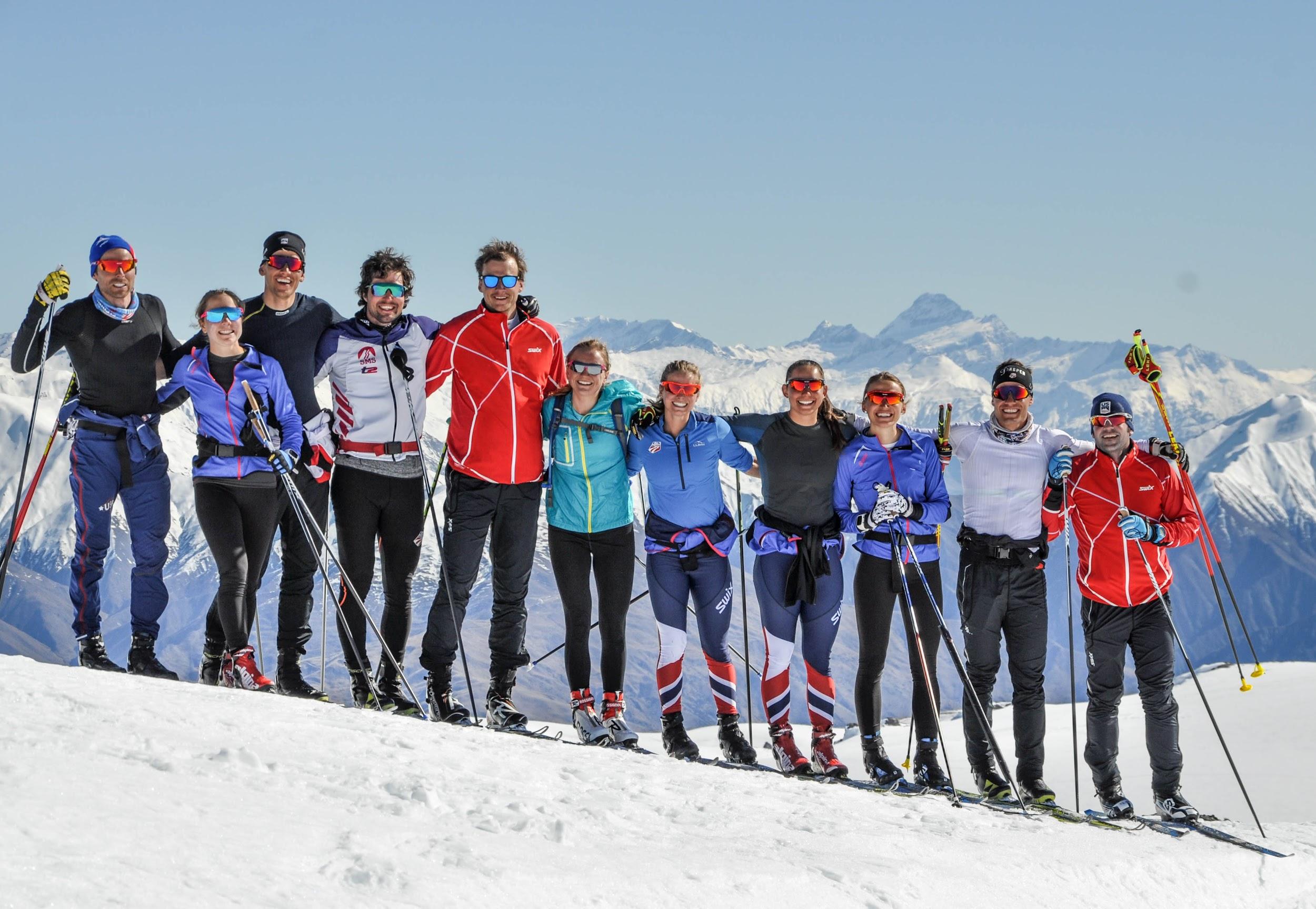 The following was written by Alayna Sonnesyn, a new member of the Stratton Mountain School (SMS) T2 Team who graduated from the University of Vermont (UVM) this past spring.

Originally from Plymouth, Minnesota, Sonnesyn, 22, raced on the UVM Ski Team for four years and qualified for four NCAA Skiing Championships teams. She placed second and third in two races at 2017 NCAA Championships, and in her senior season, won the first five Eastern Intercollegiate Ski Association (EISA) races and went on to reach the podium in 10 out of 11 EISA races. Sonnesyn expressed an interest in exploring the dilemma many of the nation’s top skiing talents face out of high school: whether to attend college or get an early jump on a pro-racing career. She plans to post this two-part series on her blog as well.

For the first time in 17 years I will not be going back to school this fall. Saying that out loud is more daunting than I had anticipated. For the most part, the classmates that I graduated with can say that they are “going to grad school,” “starting a new job,” or “taking a year off to travel,” but I still don’t know where I lie. I am not taking any classes this year, I am not working anywhere consistently, and I am doing more than just traveling to explore, I’m traveling to race!

I am wrapping up a three-week training camp in New Zealand with the SMS, Craftsbury, and US Ski Team. When I walked through customs I had to write down my reason for visiting New Zealand: Was I a student? Was I visiting a family or friend? Was I working? What was my job? In the rush of the moment and due to habit, I wrote that I was still a student and continued on my way. I later had a few reflections; I still haven’t reached the point yet where I can say I have a job. I don’t have a salary and there are no company benefits. Yet, I work 24/7 toward my job — my job is ski racing. But why is this so hard for me to admit to myself? Is it because, for my entire life, I’ve been a student? What if I hadn’t taken this route? How do others make this decision? 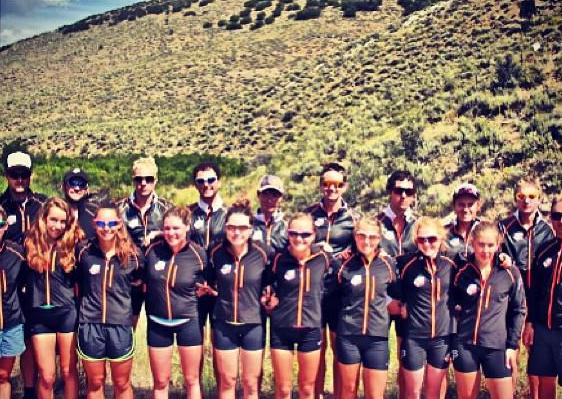 Racing throughout high school, I was given a number of perspectives about picking skiing versus school. My friends were all preparing to go to college and I always assumed I would go to college, too. My parents and older sister went to school, why wouldn’t I go as well? But then I thought about skiing. I never had the most outstanding results in high school (never qualified to race internationally), but I was good enough to qualify for regional and national level camps like REG, NEG and NTG. I traveled to these camps and trained with other high-level athletes, getting more and more motivated by each skier or coach that I met. Then the thought came to me… what if I didn’t go to college? I could focus on training, make those vital steps toward international racing, and continue along the “pipeline” that so many Olympians had followed. Maybe I would make bigger jumps and improve my skiing exponentially? I was entering the unknown and I was unsure how to pick the right choice for me. Looking back on this four years later, I realize that I was far from alone in this predicament.

I have since had the opportunity to talk to a wide variety of skiers and competitors and have learned so much that I wish I knew in high school. It’s OK to be confused. It’s OK to make your own path. Every athlete is in a different situation, comes from diverse athletic and academic backgrounds, and has various goals that they hope to achieve post-high school.

Personally, I finally decided that taking a gap year might be too big of a jump for me. I wasn’t ready to focus on skiing and I had a lot of goals for myself academically. I decided to attend the University of Vermont and upon reflection, can admit that this was one of the best decisions of my life. Similarly, SMS teammate, Kelsey Phinney, went from high school in Boulder, Colorado, directly to Middlebury College.

“The reason I chose Middlebury College was simple: I went to visit and I was ready to unpack and stay for good. I loved the people, the area, the ski team, and the classes I sat in on.” — Kelsey Phinney 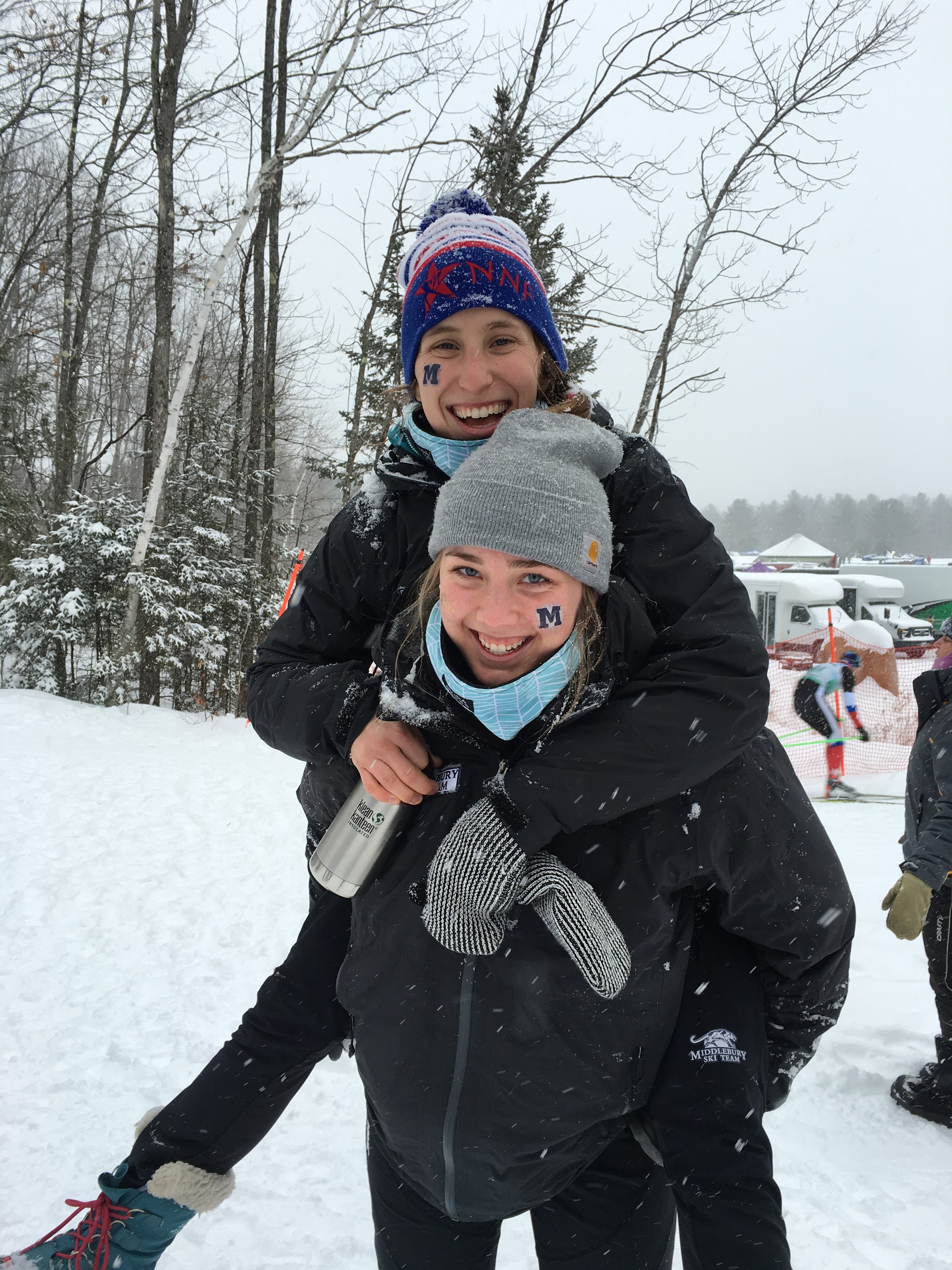 Kelsey and I both fell in love with our schools from the start and knew we were where we belonged. We took these college experiences as learning opportunities; maybe we wouldn’t have been ready to jump right into the professional circuit but we both determined this was the right path for us.

“I loved the experiences I had on the Carnival circuit. Both good and bad times taught me a lot about life and skiing, and I felt like the balance of school and sport made me better at both,” Kelsey reflects.

Similarly, Sophie Caldwell had her mind made up without the need to hesitate over a gap year or jumping into full-time skiing.

“I chose to go to college right out of high school, and it was something I had always known I wanted to do. I knew there was a good chance I wanted to ski professionally at some point in my life, but when I was 18, I wasn’t ready to 100% commit to skiing,” Sophie, a Dartmouth graduate, explains.

With academic goals in mind and the confidence to pursue skiing in the long run, sometimes there’s no need to question it. Going directly to college might challenge you more than you think and it might make you question what you’re doing. The balance of school and skiing is great, but it’s TOUGH! At least you worked through those challenges and figured out where you want to be though.

“I definitely had my ups and downs throughout college and at times I considered not pursuing skiing after college, but by the time I entered my senior spring, I knew I wanted to give skiing professionally a shot and knew it was because it was what I wanted to do, not what I had to do,” Sophie notes.

Over the course of four years, we were able to say goodbye to our homes, grow into adults and develop as skiers, allowing a much smoother transition into the professional racing circuit post-college. This decision to go right to college made sense for Kelsey, Sophie and me — it was simple; but I recognize that this choice isn’t as straightforward for everyone.

The conflict of picking a school, a place we are willing to spend at least four years of our lives at, can be intimidating to anyone. Taking a year off to think and explore what motivates you once the structure of school is taken out of the picture can be extremely vital to one’s skiing longevity. Other times, this year off can be done to test out what skiing professionally is actually like.

“I wanted to test out whether I could do only professional skiing.” — Katharine Ogden

A feat that might sound easy to accomplish — ski, eat, sleep, repeat — can’t be THAT hard! But what happens when you suddenly put all of your time and energy into one goal?

“Ironically, my gap year did not turn out even close to how I had planned or imagined!” reflects Julia Kern. 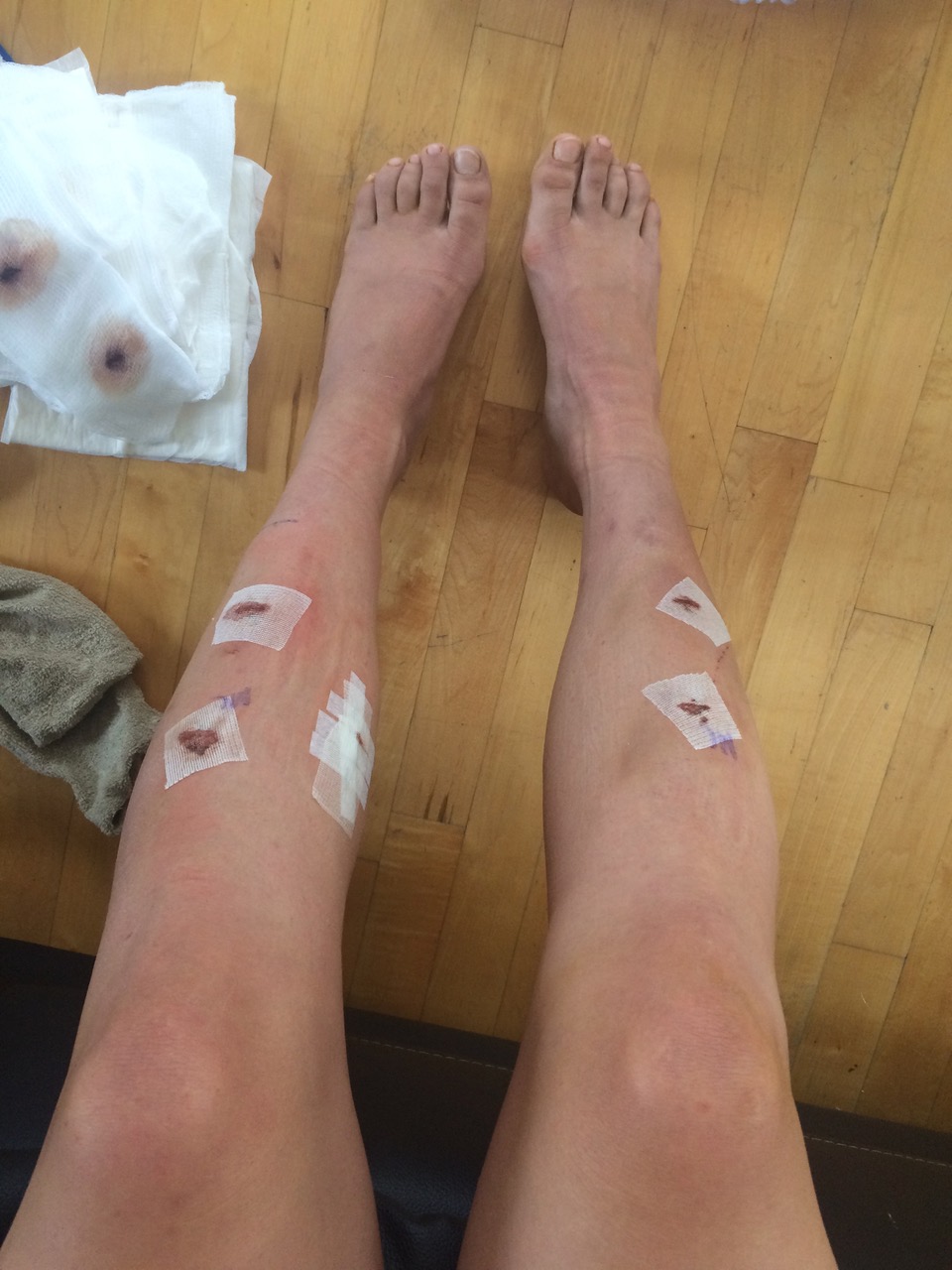 Julia Kern with swollen legs after surgery, requiring A LOT of physical therapy during the summer.

After facing an early summer surgery for compartment syndrome and then an untimely back injury in the fall, Julia notes that her gap year was extremely tough with plenty of lows and setbacks.

Ida Sargent offers, “My PG year was a bit of a disappointment as I wasn’t as happy as I was expecting and I also didn’t feel like I made as big of a jump with my results as I had hoped.”

“I think in hindsight it was a good philosophy but I think I approached it wrong. I didn’t do a good job securing other things to do besides training and was thus pretty bored, which led to me putting a lot of stress on skiing and racing,” says Katharine Ogden.

Maybe taking a gap year isn’t as easy as it sounds? Coming face-to-face with this type of ski-focused intensity as an 18 year old can be challenging.

“It showed me how much I really wanted to go to college,” offers Katharine.

It can also be validating, as it can prove to oneself where they really belong at that point in their life.

“It made me realize that I wasn’t ready to ski full time and I still needed balance in my life,” reflects Ida.

What might be the most beneficial aspect of taking a gap year are the lessons you learn throughout. How to deal with the pressure, free time, potential obstacles, and how to respond when you’re suddenly put in an unfamiliar situation.

“My gap year turned out to be far from ideal from a training/fitness standpoint, but I became very in tune with my body, learned how my body responds to training, became mentally tougher, and learned that I love the skiing lifestyle (even if it is tough sometimes) and that I want to ski at the highest level possible,” says Julia.

Some things you just can’t learn in a classroom. 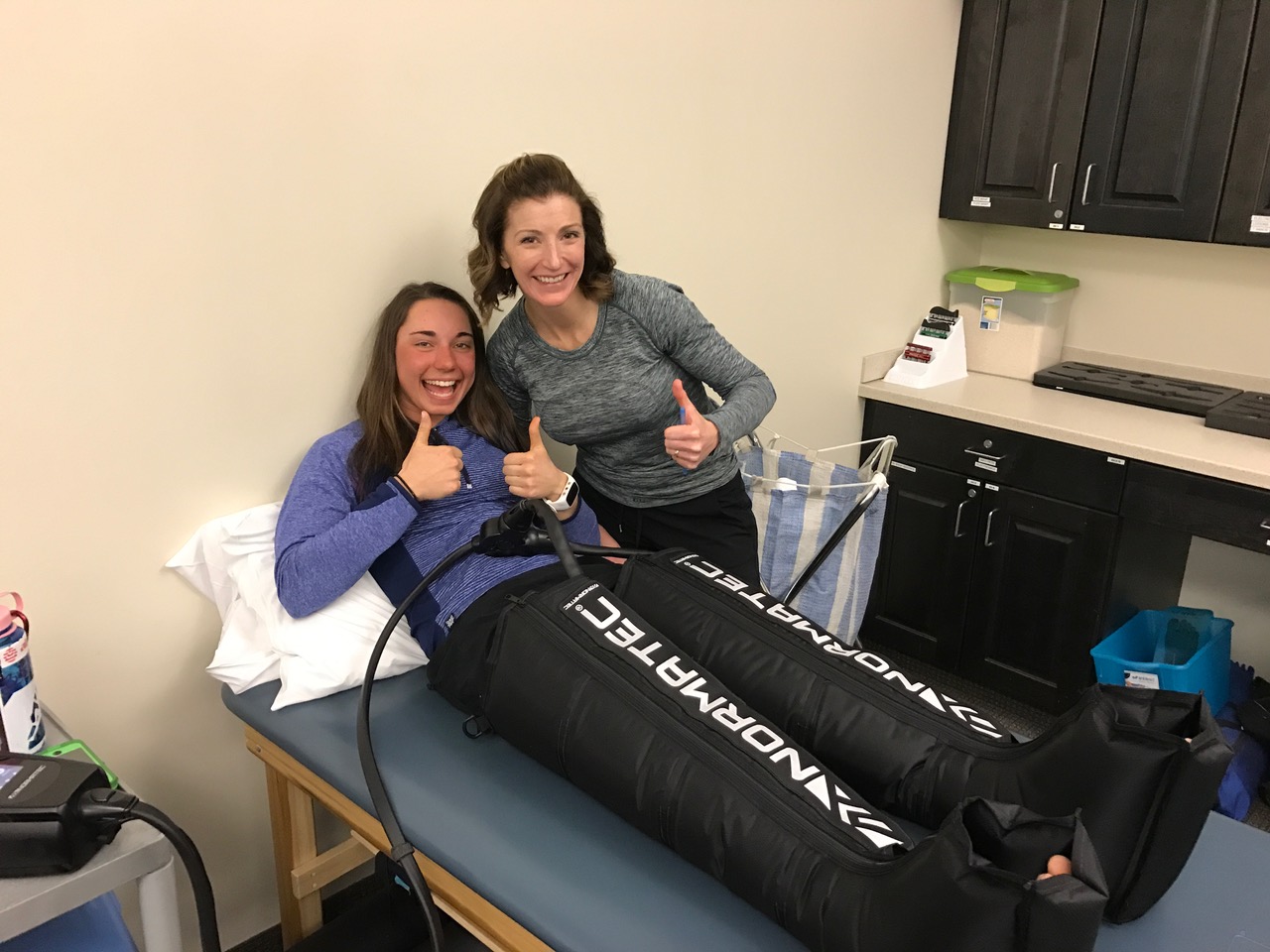 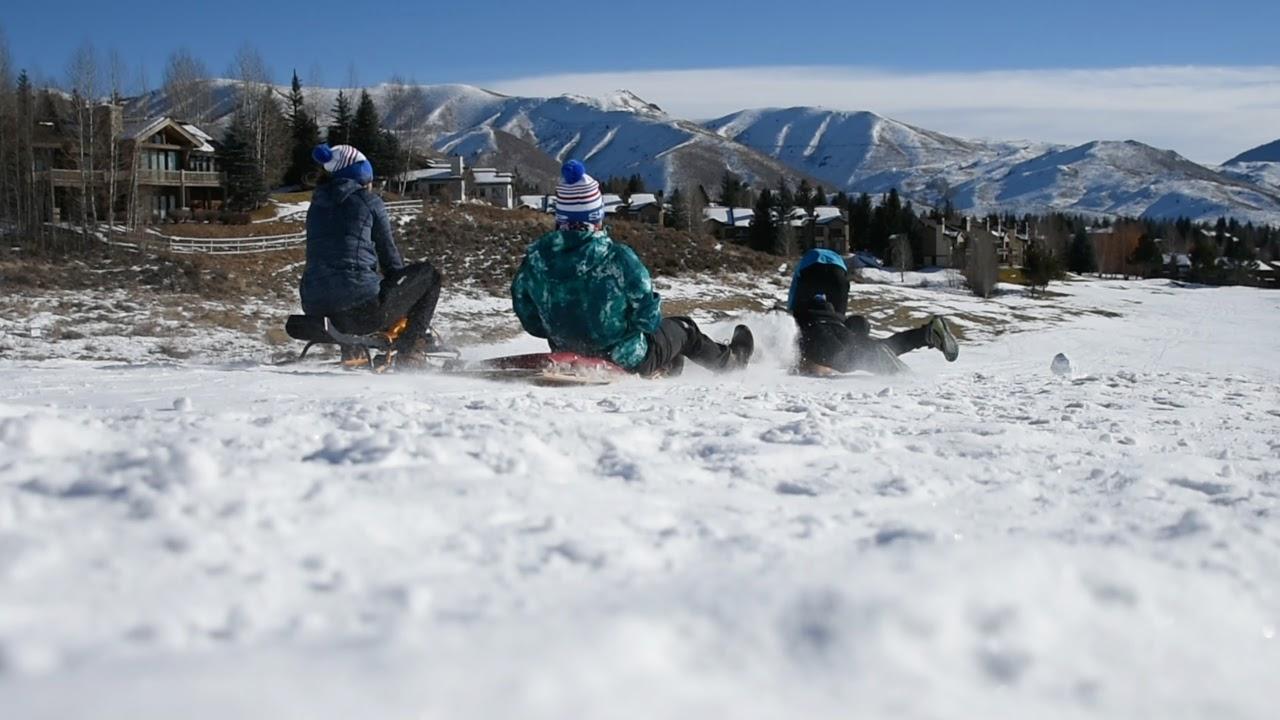 Julia Kern taking the time to think about something other than skiing during her gap year. (Photo: Julia Kern) 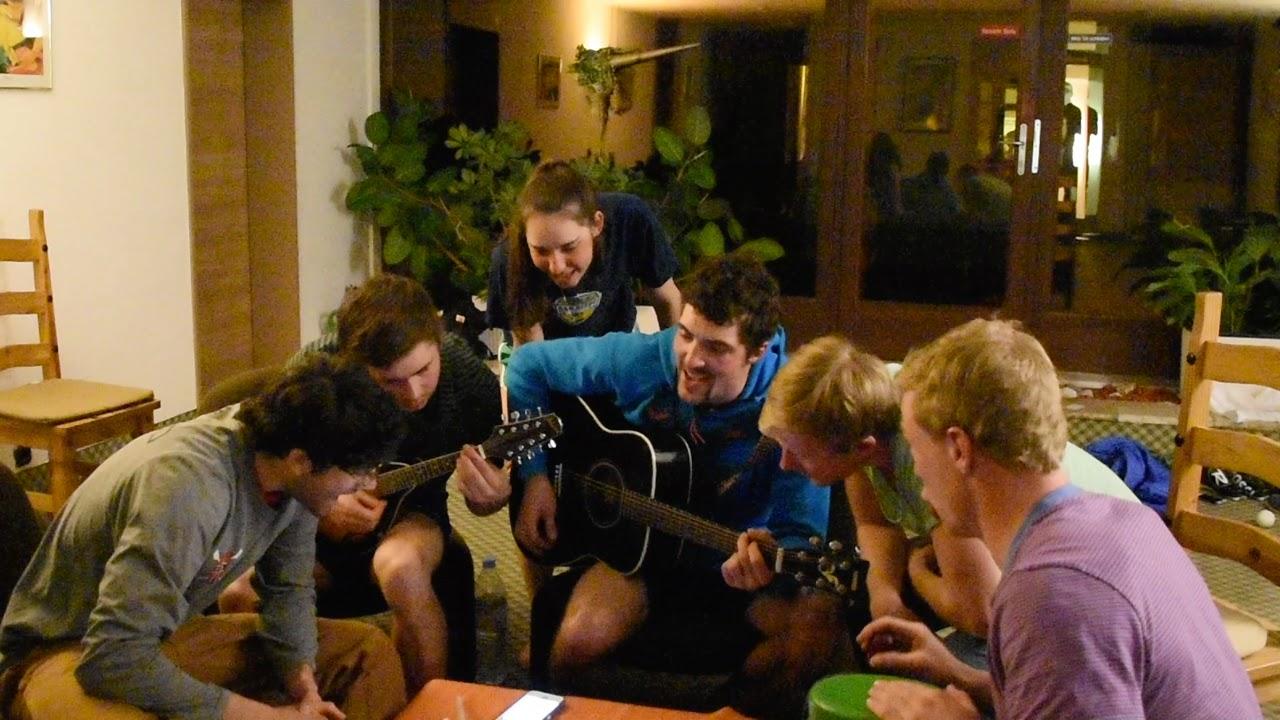 How to pass the time away, when you have so much of it. (Photo: Julia Kern)

After taking a gap year to figure out what skiing was like full-time; Ida, Katharine, and Julia attended Dartmouth College (via various routes):

Ida states, “I started by going to school full time and I raced for Dartmouth for three years and then made the National team so I took my senior winter off to race for the USST and then I went back for a spring term my fifth year.”

“One year in [as a traditional student], I am very happy at Dartmouth and racing the collegiate circuit last year reignited my love for the sport,” adds Katharine.

While Julia contributes, “I chose Dartmouth because I wasn’t sure what skiing and school balance I wanted to have, but I did know that I wanted to be able to take terms off to race internationally.”

Regardless of which Dartmouth plan they followed, all three skiers seem to have enjoyed the choices they made. Whether taking a gap year is or isn’t part of your plan, the most important takeaway is that you should TAKE SOMETHING AWAY! Learn something new about yourself, about skiing, or about classes you want to study.

So what about other options for pursuing a ski career? Jessie Diggins and Andy Newell both chose to skip college and go straight into skiing. Stay tuned for my next post when I’ll include input from both of them as well as what U.S. Ski Team coach Matt Whitcomb has to say on this topic.