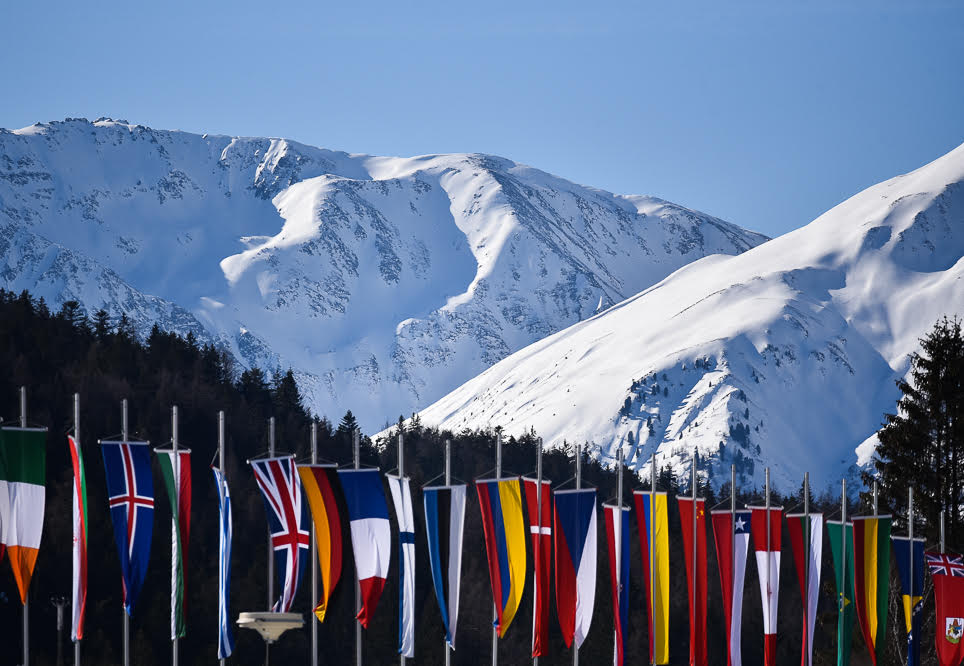 Flags from each nation fly over the stadium in Seefeld, Austria for the 2019 World Championships. (Photo: John Lazenby/lazenbyphoto.com).

As the Seefeld World Championships faded as of Sunday with the conclusion of the men’s 50-kilometer freestyle, here are some news gaps related to the recent arrest last week of five cross-country skiers.

Here are the basics. Several cross-country athletes were arrested in Seefeld as part of a German and Austrian effort to curb doping in sport. Austrian athletes Dominik Baldauf and Maz Hauke, Kazakhstan’s Alexey Poltoranin, and Estonia’s Karel Tammjärv and Andreas Veerpalu were the cross-country athletes arrested. Several other arrest were made including Dr. Mark Schmidt, a German doctor considered to be the leader of the doping efforts. Doping and enabling doping activity is criminalized by law in both Germany and Austria.

Estonian public broadcaster ERR news reported that during a press conference given by Tammjärv on March 1, upon his release from the Austrian authorities, he had admitted to doping in sport. Tammjärve stated he had begun doping in 2016 and was initially put in touch with Dr. Schmidt by Mati Alaver, the former director of the Estonian ski team.

Alaver has subsequently stated that he connected Tammjärve and Schmidt.

Tammjärv also confirmed that Andreas Veerpalu and his father Andrus Veerpalu were aware of the doping program. Andrus Veerpalu is a former Estonian cross-country athlete who in the past has been implicated with doping. He has been a coaching consultant to the two Estonian athletes involved and is also an adviser to Poltoranin. The older Veerpalu is a three-time Olympic medalist.

where to buy albuterol online

Anti Saarepuu, the official Estonian cross-country ski coach for both Tammjärv and Veerpalu, denies knowing that athletes under his watch had been involved with doping.

In a separate article, ERR reports that the younger Veerpalu released a statement through his mother in which he admits guilt. “I have given statements to the police and confessed honestly to my guilt in breaching anti-doping rules. I do not wish to interact with the media,”Veerpalu stated according to EER. “I am ashamed of what happened, and apologise to everyone I have caused harm to by my actions”.

Thus far, Poltoranin has not commented publicly about his involvement.

Velonews reported this morning that Austrian cyclist and three-time national time trial champion, Georg Preidler, admitted to illegal doping activity. Preidler, had been a member of the French WorldTour team Groupana-FDJ, but is no longer with the team. Over the weekend, Austria’s ex-pro cyclist Stefan Denifl is reported to have admitted to doping.