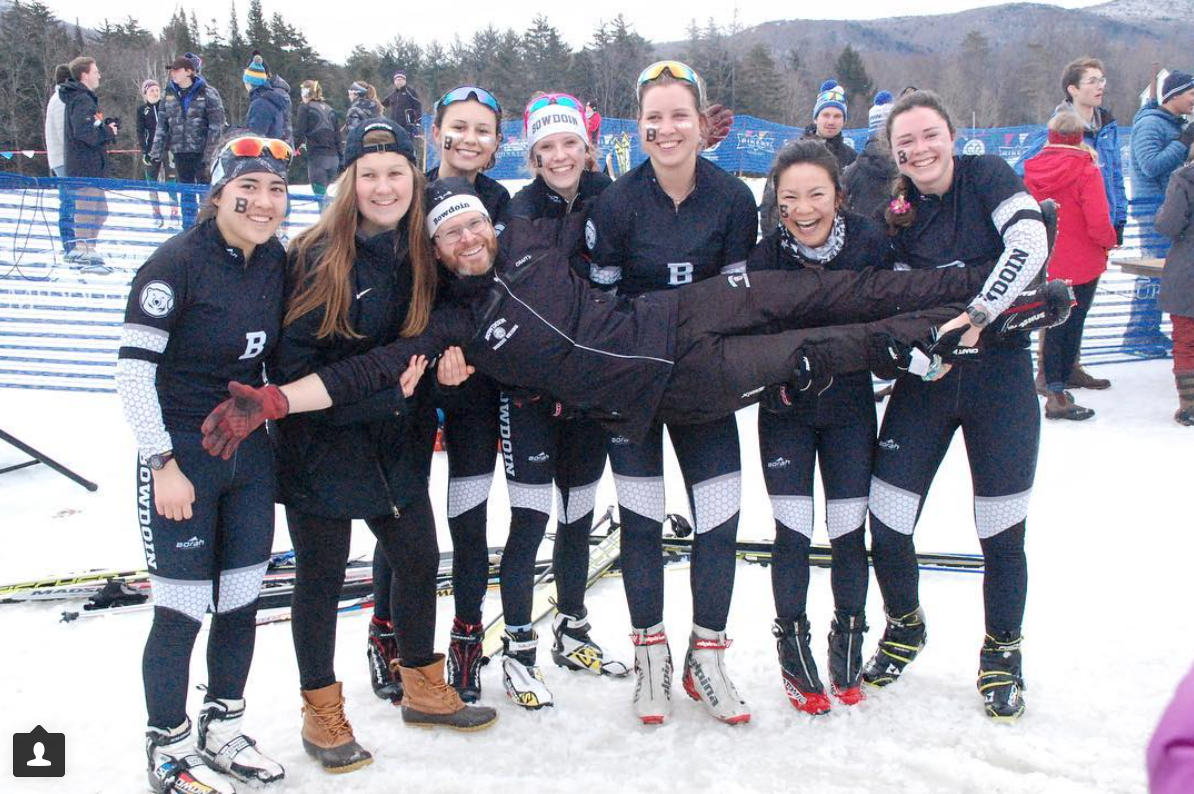 Building on one of its most successful seasons yet, the Bowdoin College nordic ski team, out of Brunswick, Maine, recently jumped back into training under the guidance of head coach Nathan Alsobrook. Last winter, three skiers qualified for NCAA Skiing Championships, one alumna qualified for the U.S. Olympic team (Kaitlynn Miller, class of 2014), and one visually impaired skier Jake Adicoff (’18) earned a silver medal at the Paralympics. It was a season that Alsobrook names as a highlight of his coaching career.

“The most fun thing about has just been to see the very slow but steady progress that the program has been able to make over the past several years,” Alsobrook said in a phone interview last month. “It’s been very fun and exciting.”

To top it off, Alsobrook was recognized by the New England Nordic Ski Association (NENSA) as 2018 Coach of the Year in recognition of his team’s steady progress and his contributions to the growth of cross-country skiing in New England.

“Over the past years, Nathan has been active in NENSA Programming, including serving as a coach at Eastern Regional Camps, chairing the Coaches Education Committee and running L100 Technique clinics for the state of Maine,” a NENSA press release stated. “Through his dedication to these programs he has made the Bowdoin Nordic Team a visible and attractive institution for skiers to continue their careers.” 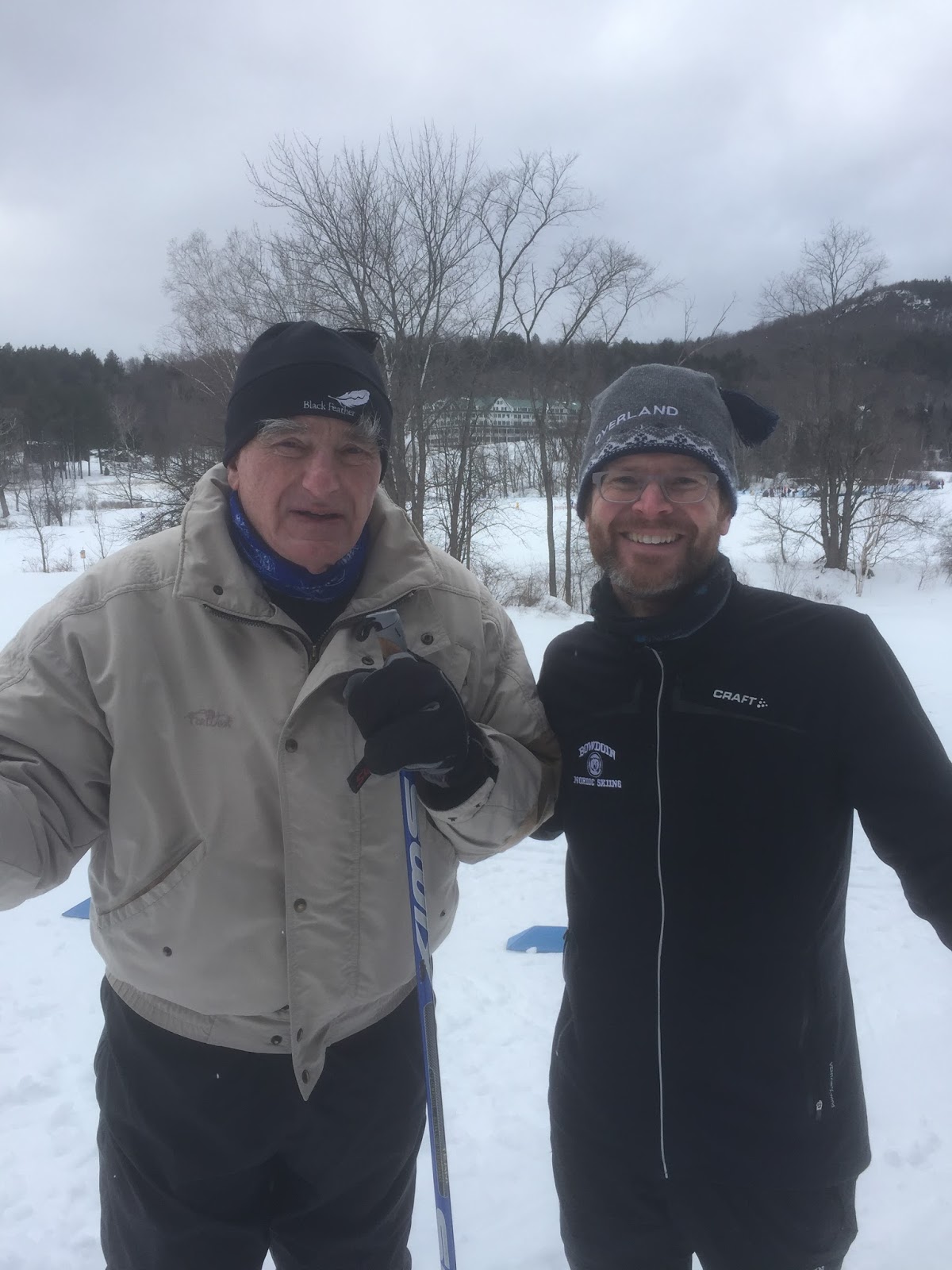 A Bowdoin graduate (’97) himself, Alsobrook returned as head coach in 2007, taking the place of former U.S. and Canadian national team coach Marty Hall, to whom he attributes planting the seeds for Bowdoin’s current development.

“He was really responsible for taking Bowdoin out of where it had been,” Alsobrook said of Hall’s eight years with the team. “We really weren’t functioning at a super high level before Marty came in. He was able to really push for the college to bring more resources to the sport and just sort of professionalize the whole program. He essentially created this really great foundation for me to springboard off of.”

Before Bowdoin, Alsobrook coached at Whitman College, Montana State University (MSU), Colby College, and the Pocatello XC Ski Foundation, and earned a master’s in exercise physiology from MSU in 2005.

While it didn’t happen overnight, over the years, the Bowdoin Polar Bears have trended upward in the Eastern Intercollegiate Skiing Association (EISA) nordic rankings.

“We had individuals pop great races, and we had these flashes of brilliance that more was possible, but it took so many years for us to become competitive as a team. It was not until 2013 that we sent a skier to NCAA’s during my tenure,” Alsobrook explained. “We would have little successes here and there, a great relay performance or a single race where we would finish very competitively, but we never really put it together for consistent week after week Carnival team performances. It was really only last year that that finally happened, where all of a sudden for the combined men’s and women’s nordic events we would find ourselves finishing in the top half of the league.”

Every weekend on the Carnival circuit last winter, either Bowdoin’s men’s or women’s team placed in the top six. And it saw three skiers — more than ever before — qualify for NCAA’s in Steamboat Springs, Colorado: Gabrielle Vandendries, Renae Anderson and Elliot Ketchel.

Outside of the results, Alsobrook said he enjoys the culture of the student body at Bowdoin and feels that it contributes to the dedication and work ethic of his athletes.

“There is this really great sense of balance here at Bowdoin, and we really try to compliment that in our program,” he said. “It’s such a fun mix of these very academically focused and engaged students. … They just love learning, they love being in this environment and challenging themselves, and then they’re just so ready to get out and train hard.

“I think we do a pretty nice job here at Bowdoin of making this a very collaborative experience, the learning experience and certainly the athletic experience,” he continued. “And it’s just such a natural fit for when you’re trying to create this very team-centered program like I’m trying to do here, that that culture is already in place at the college. I mean, people really want to do well here, in whatever they’re doing, and they’re going to work really hard to do it, and yet they’re trying to help everyone else do the same. That’s something I really appreciate … any competition is directed toward making everyone better.”

His coaching philosophy aims to capitalize on this dedication to personal success, while also reflecting the sense of balance achieved at the school.

“I can’t remember who started saying this, but it’s something we started saying around our team:  ‘Happy people ski faster,’ and that is really at the heart of what we are trying to do,” he said. “I know that my skiers are going to get more out of themselves on the race course if they feel very fulfilled with their Bowdoin experience as a whole.” 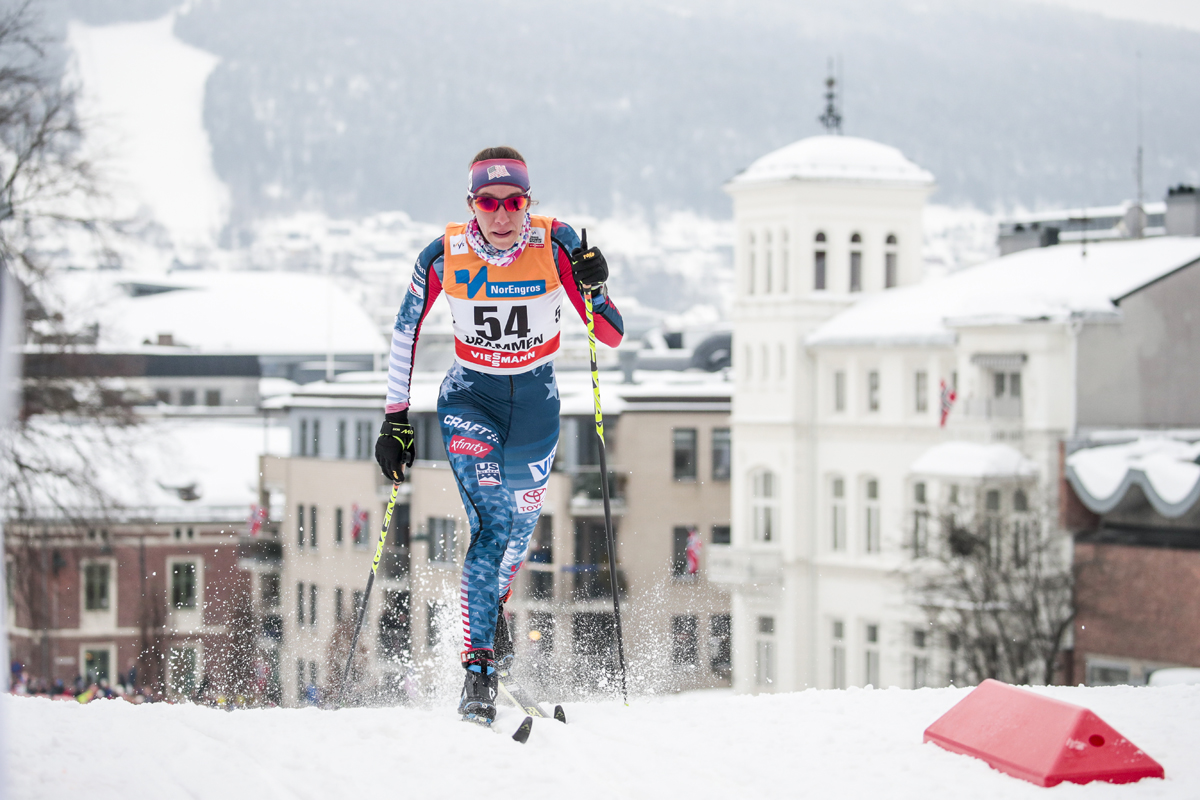 According to Alsobrook, this culture and balance served Kaitlynn Miller, who now skis for the Craftsbury Green Racing Project, well in her time at the school. He described Miller as “very studious, very thoughtful … and yet very focused when it came time to train.”

Miller ended last season as the overall SuperTour leader and has earned World Cup starts in November and December as a result.

“It was really nice to have someone that embodied what we are trying to do in our program,” he continued. “For someone who is such a high-level athlete, she is just extremely humble, very kind and thoughtful, very team-centered. It was really fun to coach an elite athlete who was such a team-centered, selfless person … It’s been a real pleasure to watch her take off.”

As for the upcoming season, Alsobrook will continue to focus on the continued growth of his team.

“With my athletes, we’re all about the process,” he said. “Having said that, of course, I have outcome goals, essentially I want to see the team keep moving forward. We’ve never won the Maine State Championship, for example … so we’re really excited to go after that this year. We’ve come close a few times, and maybe this will be our year,” he said.

Another goal will be to continue to place highly at EISA Carnivals and to develop a strong championship team. Last year, its two female athletes at NCAA’s — Vandendries and Anderson — posted top-30 finishes in Steamboat.

“Certainly bringing back a good contingency of skiers to NCAA’s again is a big goal,” he said. “We had a number of times where our [team] finishes [in EISA competitions] were fourth, fifth, sixth pretty consistently throughout the season, and that’s a pretty good place to be in a league as competitive as EISA. I do not want to stay there and keep cranking out those finishes, I want to keep getting better. … I mean, hey, we did fourth last year, why not try for third this year? They’re just great things for us to keep fighting for while at the same time we stay firmly grounded on the process.”

Special thanks to Nathan; you’re our coach of the year. Love, your carrot patch #happyskiersskifast