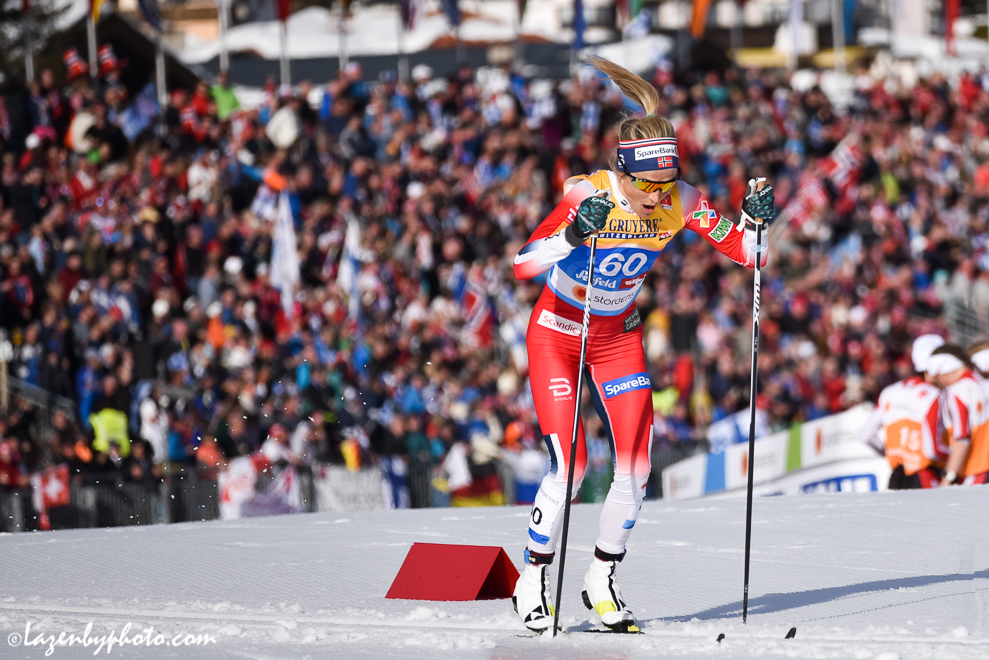 Never a slow moment: Therese Johaug of Norway on her way to winning the women’s 10 k classic at the 2019 World Championships in Seefeld, Austria. (Photo: John Lazenby/lazenbypohoto.com)

The race is the spectacle that determines the outcome. And when Norway’s Therese Johaug highlights the start list, her winning outcome seems pre-determined as soon as she skates or strides from the start. On Tuesday in the World Championship interval start 10-kilometer classic, Johaug won gold. In a race where splits are given, Johaug may have only been flummoxed by the close margin between her first place and the resolute chaser in nineteen-year-old Frida Karlsson of Sweden.

The 5 k time check revealed how the race was shaking out for potential contenders. Three skiers remained within 30 seconds of Johaug: Karlsson 7.3 seconds back, Norway’s Ingvild Flugstad Østberg 18.3 seconds behind, and Astrid Uhrenholdt Jacobsen 27.5 ticks back respectively.

Despite each of the three skiers ceding time to a metronome-like Johaug over the remaining 5 k, her performance made her appear less like an automaton than in races past. Certainly, Johaug clinically executed the stride and glide and double pole. But for a brief moment,  Johaug subtly teased Karlsson into thinking she had a chance for the win.

Then again this is Johaug. A champion who struggled through a positive doping test in Oct. 2016 and a subsequent 18-month competition ban to arrive this season as a lock for any distance event win. Ceding precious time to a young Swede with 3.3 k’s remaining on Tuesday was a performance blip not a defining moment.

Karlsson started in bib 28, Johaug in bib 60. Karlsson’s time in the leader’s chair was tenuous as she awaited 32 bibs to ski through the finish and determine her first or second place podium fate. 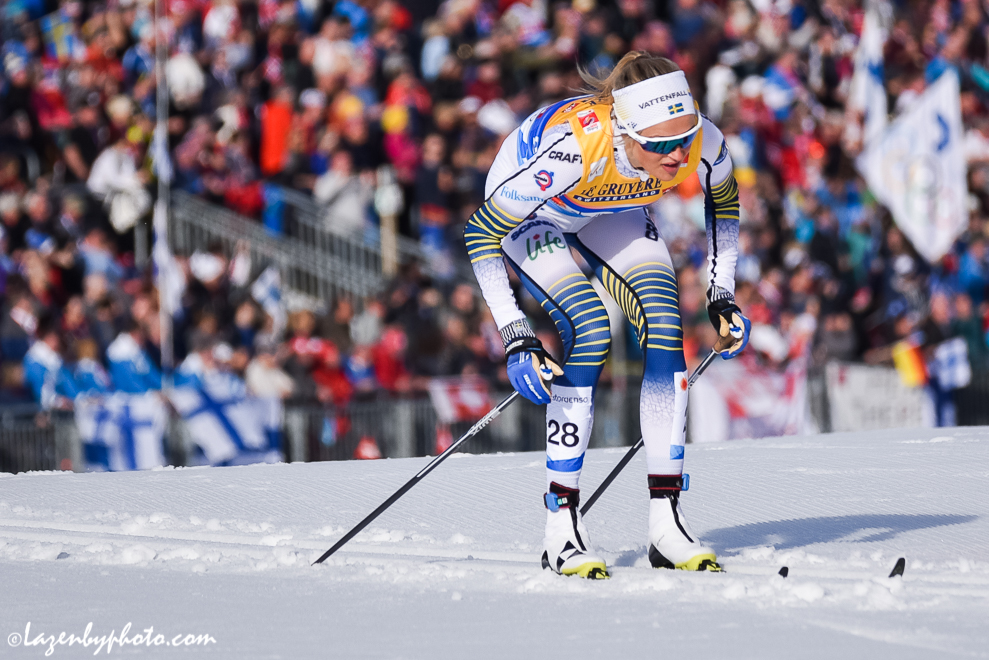 Young and ready to challenge, Sweden’s Frida Karlsson challenging for the top spot during the 10 k classic at the 2019 World Championships in Seefeld, Austria. (Photo: John Lazenby/lazenbypohoto.com)

The final statement in Johaug’s 10 k classic story went like all the other distance races she has entered this season along with her World Championship skiathlon race over the weekend.

It was a win in 27:02.1 minutes. Whatever glimmer of hope Karlsson felt was diminished as Johaug’s winning margin bumped to 12.2 seconds when she stopped the clock. Norway’s Ingvild Flugstad Østberg was third (+35.6) while Finland’s Krista Pärmäkoski placed fourth (+37.0).

“I am really happy now,” Johaug told an International Ski Federation (FIS) reporter following the race. “This distance was my goal before the season started. I really want to win this and today I did it. It was really tough out there. I fought with myself all the time, and I feel a bit tired. … I am really fighting today. … The temperature was really hot and the tracks were really wet. I had to work with myself all the time.”

At thirty-years-old, in her return to World Cup competitive standards after serving her doping penalty, Johaug remains the distance athlete to beat. Hers is the end of the spectrum where top-end fitness is realized after winning her ninth world champ title on Tuesday. And according to FIS, the 10 k classic is a race suited for the 30 and older set. The last four winners of the 10 k individual start classic at world championships were older than 30 years old. This dates back to 2001 when Norway’s Bente Skari won that discipline at 28.

On the other end of the age and performance spectrum when it comes to realizing potential is Karlsson. At 19, she is a three-time World Junior Championship winner. In Lahti, Finland last month, Karlsson won the 15 k mass start classic and the 5 k skate. She competed in her first World Cup on Feb. 17, when she placed seventh in Cogne, Italy’s 10 k classic.

When considering Karlsson’s rise over run success curve, her’s has been steep. In little time, she has emerged as Sweden’s most viable championship podium shot in Seefeld’s distance events. That is a considerable feat knowing that Charlotte Kalla, Sweden’s beloved nordic sport hero, had sights on more championship hardware. (Kalla placed 9th overall.) 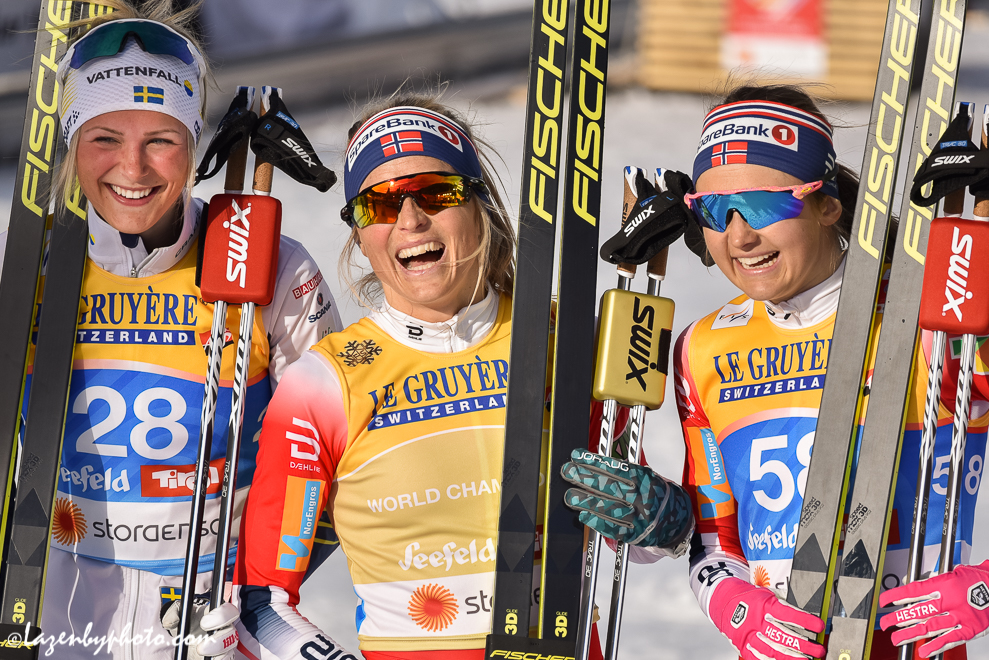 The U.S. entered Sophie Caldwell, Jessie Diggins, Sadie Bjornsen, and Rosie Brennan. All finished in the top-30. But in a program where medals are the realistic objective, the sense was they were looking for more.

“It’s definitely a bizarre and strange day,” Bjornsen said in a post-race phone call. “The only thing I can tell you is that I felt like I had one of the better performances I’ve had this year, I just feel like I fought every single moment. It was the most positive, most fighting I’ve done in my head, just attacking every single part of the course, and I guess that’s why it’s a little bizarre that the result is one of the worst in the year. Not worst, but definitely not in the place that I think I am capable of, and where I would have seen myself today.”

Bjornsen’s early splits during her first lap were encouraging – she was informed that her efforts were keeping her in the top-ten hunt.

“That was definitely really encouraging when you hear a split like that, you’re willing to dig even deeper,” she added. “I feel like that was what I was doing today, attacking every single portion of the course like I was fighting for a medal. Which I guess is funny now, to look at the result and see what happened.” 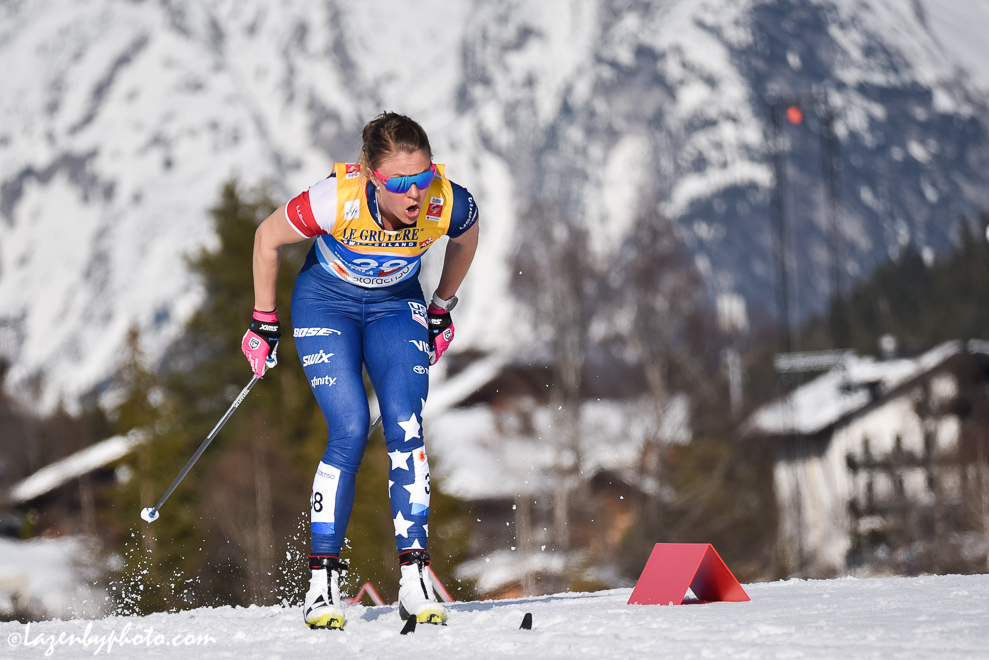 The race began at 3 PM Seefeld time in warm temperatures that morphed the tracks into wet saturated snow where they were exposed to direct sun. Race time temps soared to near 50 degrees Fahrenheit and created a course with intermittent sections of slush, re-freeze, and powdery snow. It was an in the tracks then out the tracks affair depending on sun exposure.

“It’s no secret that I don’t handle heat super-well,” Diggins said in a call. “For me, that was my great challenge today. When I finished, my face was bright red and my skin was radiating heat. … That was something that I definitely struggled with, and I thought I had taken the right steps to stay cool, by not racing in gloves or a headband or sleeves. By stuffing snow down my shirt right before the start, but clearly, it wasn’t quite enough.”

Diggins said her race pace was further stymied by a “mini-implosion” as she began her second lap.

“I think overall, all you can focus on is doing the best you can with what you have, and I did that today,” said Diggins. “As evidenced by wanting to puke and tasting blood and feeling like I was going to pass out, I know that I pushed myself really, really hard. And that’s a good feeling, to know that you did the best you could.” 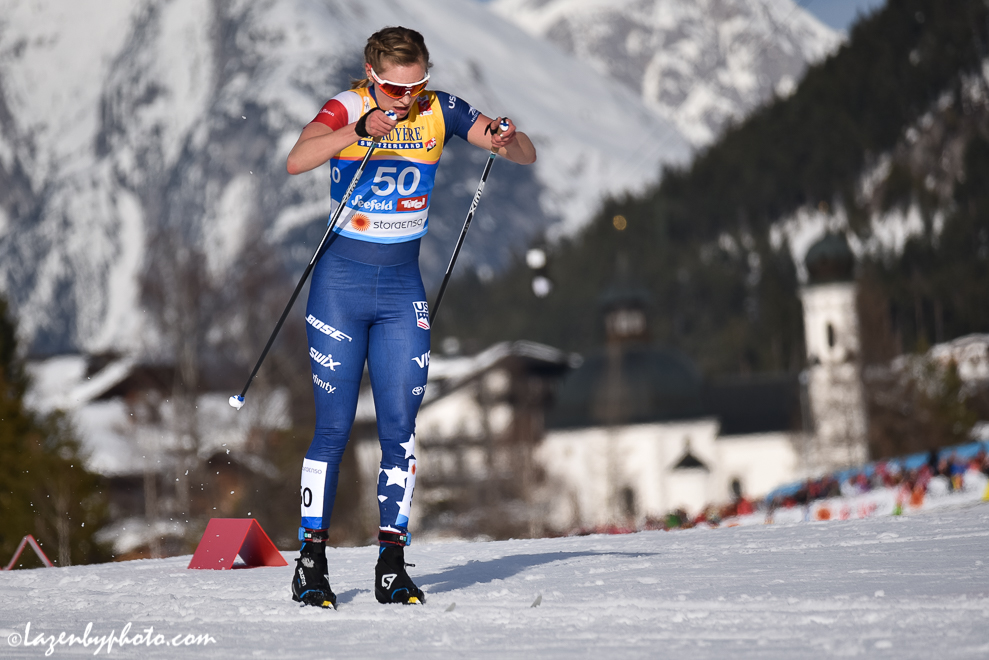 Across the line, an overheated Diggins was attended to by U.S. Ski Team staff to assure she was cooled down properly. On a day when her level of fitness was burdened by what she called her “proclivity to heat exhaustion”, Diggins focused on the professionalism of those dedicated to her race day efforts.

“We have such an awesome staff here, and an awesome, caring, team,” said Diggins. “Right at the finish, I had multiple people pouring water over my head and stuffing snow down my shirt and taking my skis for me. I just feel very loved and taken care of, and I think it’s so cool that we have such an awesome staff, that is just happy to be working hard and helping us in every way they can. I really appreciate that.”

Brennan comes off a skiathlon where she placed 10th overall — her best individual result at a World Championships. Like her U.S. peers, Brennan played the game of balancing speed and kick on a course with variable snow conditions and lengthy sections of double pole terrain. 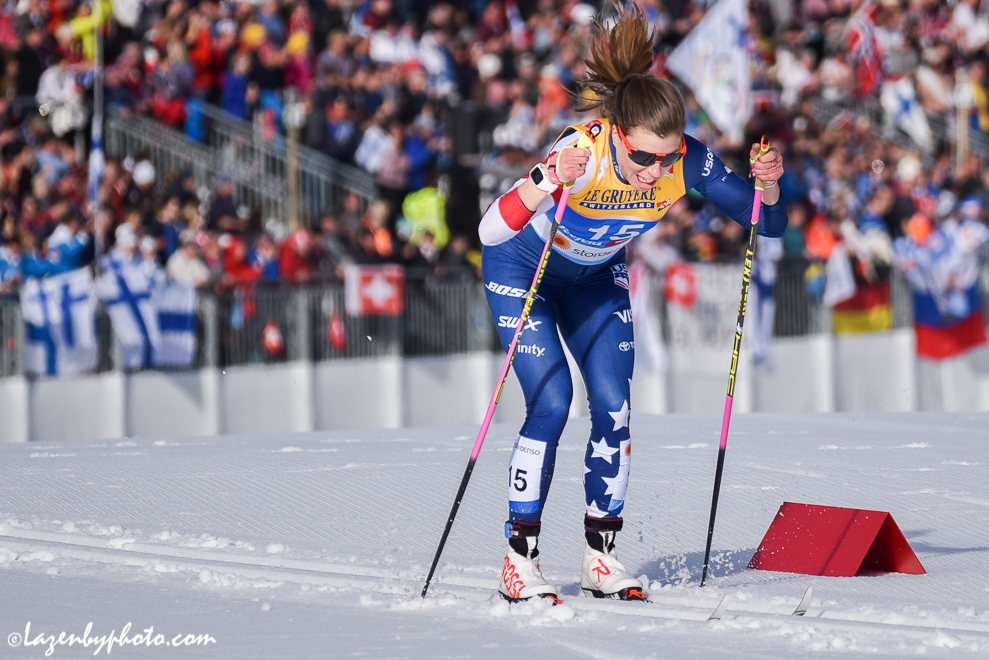 “I looked at the course and thought about my strengths and took into account those and think where I could make up the most times and need faster skis or more kick for those sections,” Brennan said in a call. “Today there was quite a bit of double pole. I thought that was my best card to play. So I tried to go with as fast a skis as I could and still make it up the hills. Whether that worked or not I don’t know, it is hard to say. That was my thought going into the race.”

The women have an off day tomorrow with the relay scheduled for Thursday. 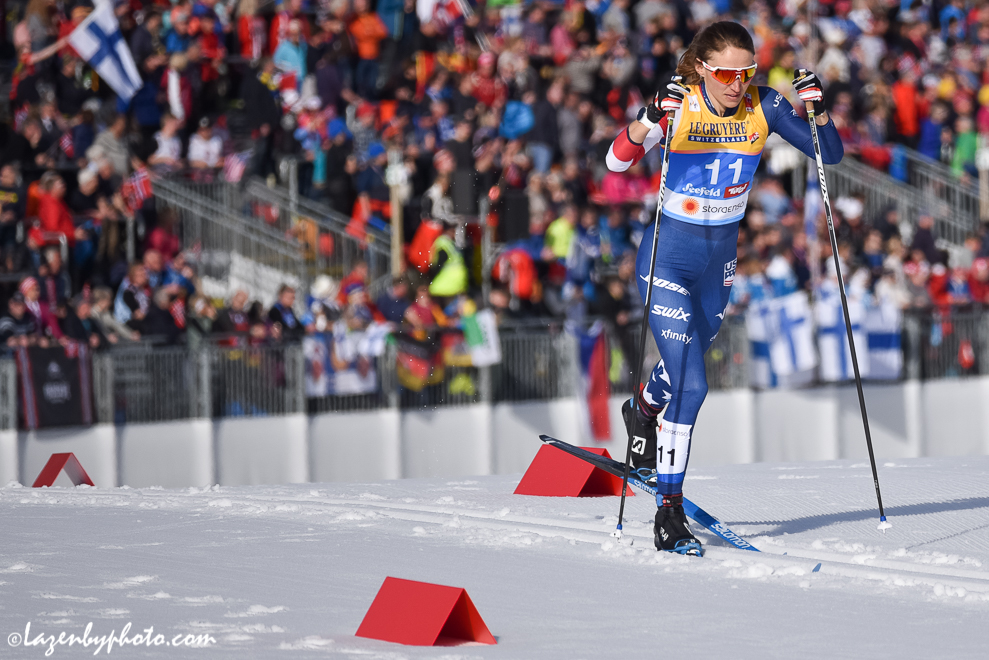