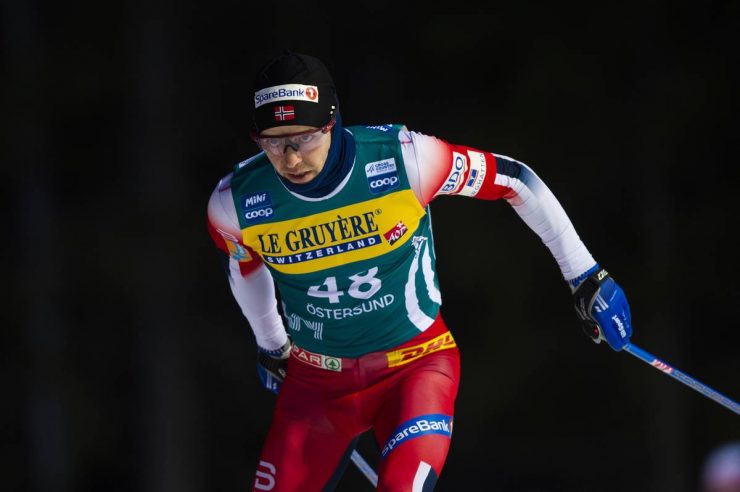 The six-stage Ski Tour 2020, which runs from Sweden to Norway over the next week, began Saturday in Östersund, Sweden with the men’s 15-kilometer individual start skate. The race began with twilight immersing Östersund with the sky eventually morphing into black as the seeded group of skiers looped around on what FIS called a 4.71 k course. This much can be concluded after a single day of what will be a hotly contested tour: the Norwegians fired on Stage 1 as they captured the top four spots in the field of 90 skiers.

The other take away beyond the Norwegian team’s blistering skis – Sjur Røthe paced himself a masterful 15 k of skiing as he won the event in 30:41.5 minutes.

However, not all looked shiny for the Norwegian as he went on to win his first World Cup of the season. At the 5 k time check, Røthe came through in 19th place, 19.5 seconds behind Hans Christer Holund, also of Norway. At 7.6 k, the halfway mark for the race, Røthe had moved up to 10th overall but remained 20.3 seconds off the fastest split set by yet another Norwegian, Simen Hegstad Krüger.

Then the tides turned, and Røthe began chiseling away at the time deficit. As he lapped through at 10 k, he sat in fourth, 15.4 seconds behind the virtual leader, Krüger. The chisel became a jackhammer; at 12.6 k Røthe was within six seconds of Krüger. 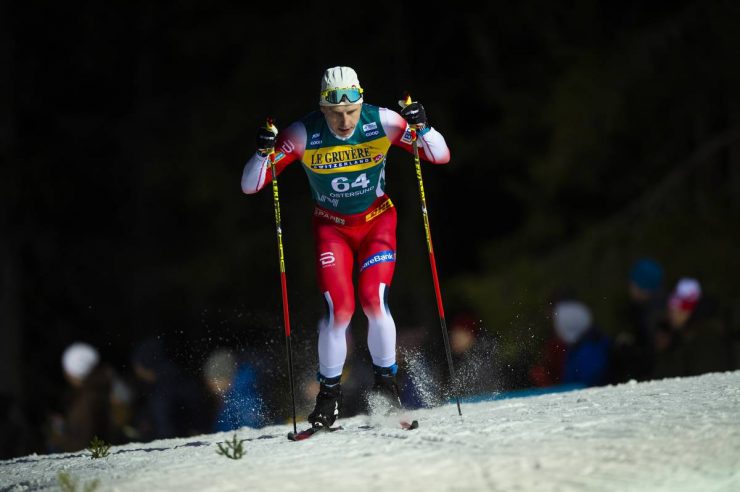 The pacing proved perfect only when Krüger crossed the line: Krüger was a later starter than Røthe: Røthe began in bib 48, Krüger in bib 64. Røthe could, however, pace himself off the splits of Norway’s Finn Hågen Krogh who began in bib 16. Of the early starters, Krogh set the fastest marks at 5 k, 10 k, and the finish, respectively. 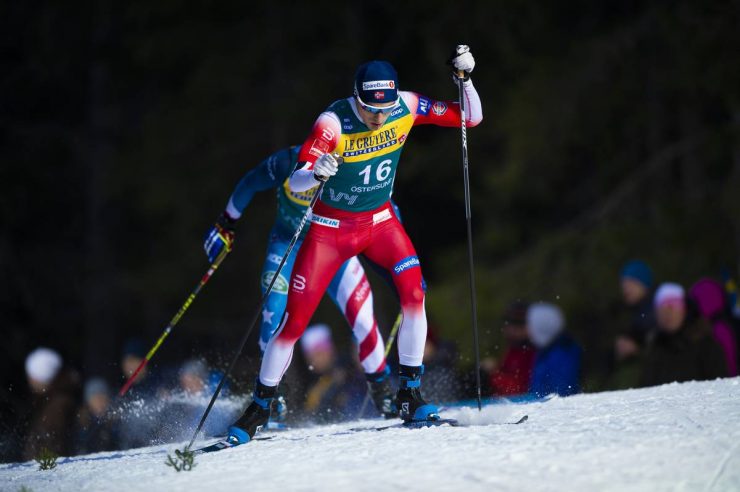 Finn Hågen Krogh (bib 16) an early starter during Stage 1 of the Ski Tour 2020, but fast through his 15 skate effort for third overall. (Photo: NoridcFocus)

Røthe’s first-place time (30:41.5) was 1.7 seconds faster than Krüger’s who took second on the day. Krogh was third overall (+16.6), and the veritable senior citizen of the Norwegian team, Martin Johnsrud Sundby, placed fourth (+17.3).

Saturday’s victory was Røthe first win of the season – however, it was his sixth individual podium which includes a second-place time of day podium in Ruka’s 15 k skate pursuit back in December. Last week, he was second in Falun’s 15 k mass start skate.

“It was a great day for me and the Norwegian team,” Røthe told FIS after the race. “I think we need to give a big hug to the guys in the wax cabin today. They made brilliant skis for us today, and for sure I have done my preparations well, I am really satisfied with today. I am looking forward to [the Ski Tour], it has been one of my main goals this season so for sure I am prepared, but I need to go home and get a good rest because it is not many hours before we do the classic race here in Östersund as well.” 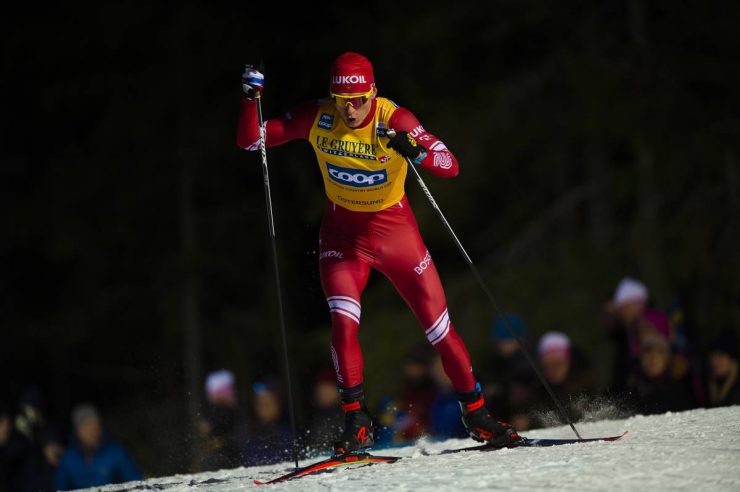 Russia’s Alexander Bolshunov, the overall World Cup leader here during Stage 1 of the Ski Tour 2020. He placed 5th on the day. (Photo: NordicFocus)

Along with capturing first through fourth places, Norway also claimed sixth (Hans Christer Holund), and eighth (Pål Golberg) place in the top-10. Norwegian Johannes Høsflot Klæbo was out of the points in 31st (+1:22.8). The Norwegian star returned after missing last weekend’s racing in Falun with a broken finger. Along with Bolshunov’s fifth place, Russia took ninth (Denis Spitsov) and 10th (Ivan Yakimushkin). The national team outlier in the top-10 was France’s Adrien Backscheider in seventh. 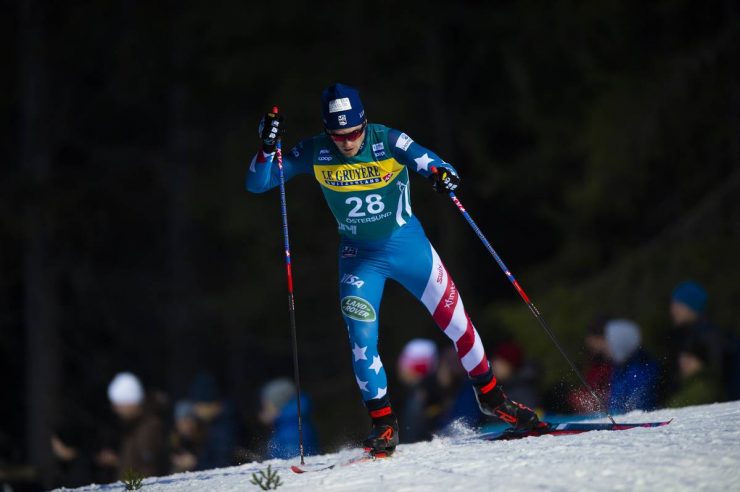 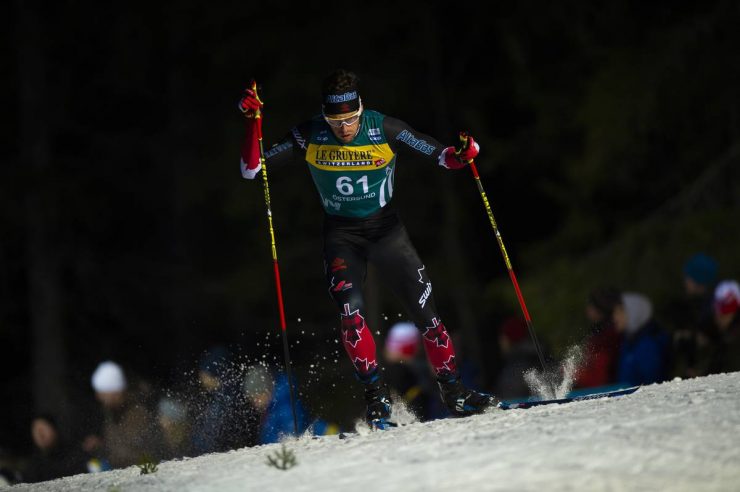 Russell Kennedy of Canada, during Stage 1 of the Ski Tour 2020. (Photo: NordicFocus)

(No time bonuses were on offer in today’s race.) 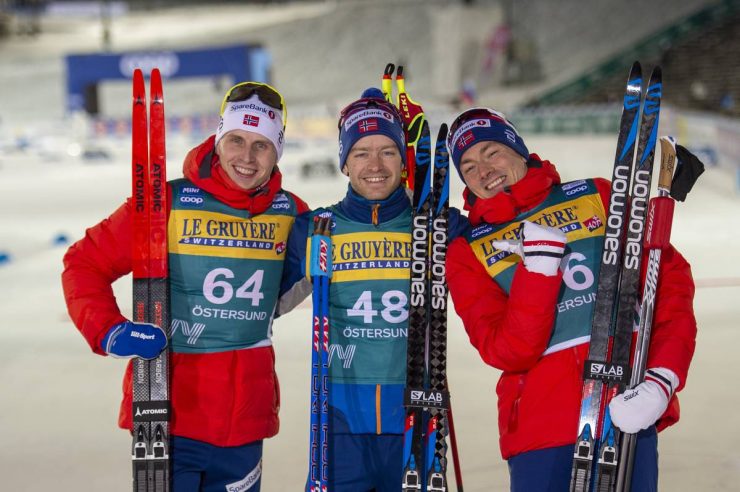