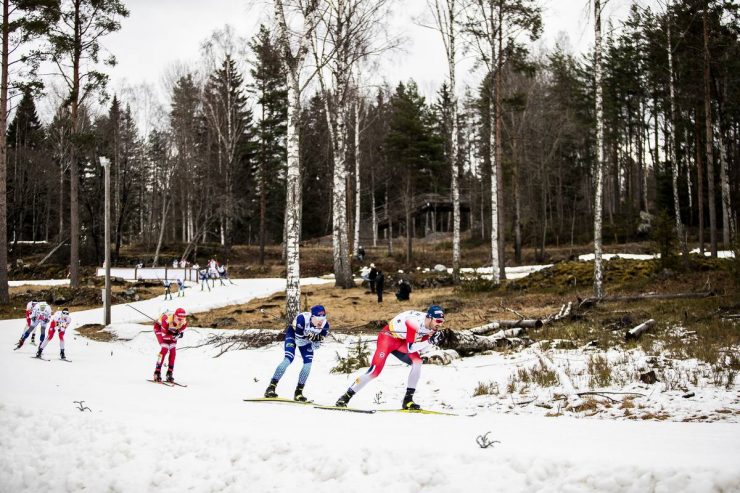 Hans Christer Holund of Norway leading down the ribbon of white. A low snow year in Falun, Sweden. (Photo: NordicFocus)

Around and around they go. Due to lack of snow in Falun, Sweden, the men again wheeled their way around a manmade ribbon of snow, skating six icy 2.5-kilometer laps. Reduced from 30 to the 15 k distance and without the long, steep climb for which the course is usually known, how athletes would fare was yet to be determined.

Along the way, two sets of 15 bonus points were available for the top ten skiers to sprint past the 6.7 and 11.7 checkpoints. It was at the first checkpoint that things began to spread out.

Overall World Cup and distance points leader, Alexander Bolshunov of Russia, dropped into a tuck on the downhill, accelerating past the Norwegians Hans Christer Holund, Simen Hegstad Krüger, Finn Hågen Krogh, and Sjur Røthe who had taken turns in the lead. Behind Bolshunov in blue Lycra sat the newly minted skate contender Iivo Niskanen of Finland. Known historically as a classic specialist, Niskanen has shown marked improvements in his skate results this season, including a second place finish in the freestyle distance event in Nové Město. 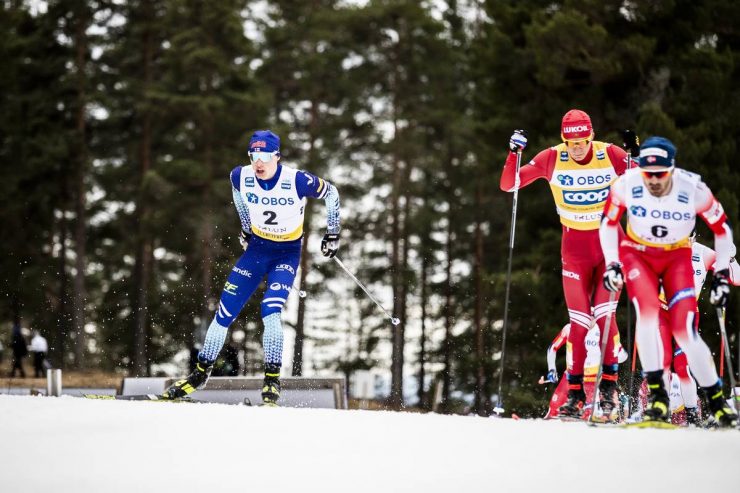 Like a slinky, the pack caught back up to Bolshunov, who relaxed and allowed the Norwegians to get to work again at the front. In a tuck or free skating, the group headed down the longest descent of the course, halfway through the lap. As the course bent to the left, the leader, Røthe, began to step turn, pushing off his right ski and leaning into the curve. As his ski left the ground, it pushed the tips of Bolshunov’s skis together, sending him to the snow (and almost to the grass) between a set of v boards. The Russian hopped back up, quickly regaining lost ground on the lead pack.

At the 10 k mark, only 8 seconds separated the top ten. But after the second bonus sprint, where Bolshunov again slingshot around the Norwegian leaders out of the downhill to grab the full 15 points, the field began to spread out. 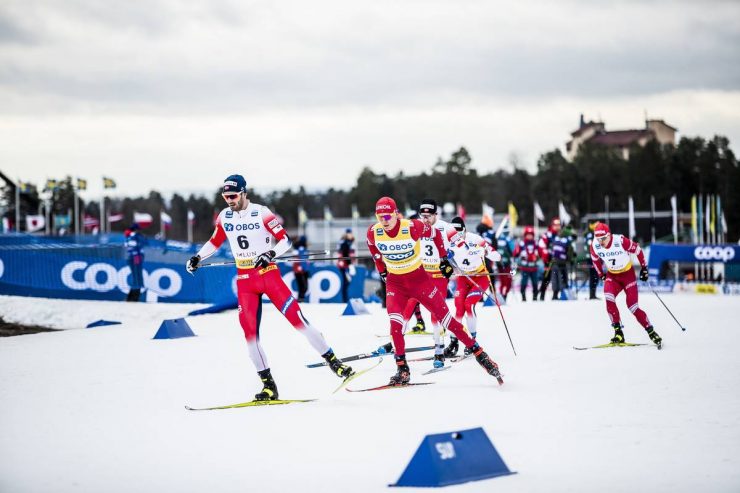 A sea of red: the top six Norwegian and Russian athletes head into the final lap of the 15 k freestyle in Falun. (Photo: NordicFocus)

Bolshunov pushed the front of the pack, trying to break free of Røthe, Holund, and Krüger. His Russian teammates Ivan Yakimushkin and Andrey Melnichenko maintaining contact from a few seconds behind.

In the final lap, Bolshunov tried to break free, but Røthe matched his every move. Holund and Krüger fell off the pace and were overtaken by the chasing Russians. Rounding a downhill turn inside the final kilometer, Krüger caught a ski in the loose granular snow and was sent to the ground, no longer in the hunt for the third step of the podium.

Rocketing out of the downhill with less than 500 meters to go, Røthe soared past Bolshunov in a tuck to take the lead over the final roller before the stadium. 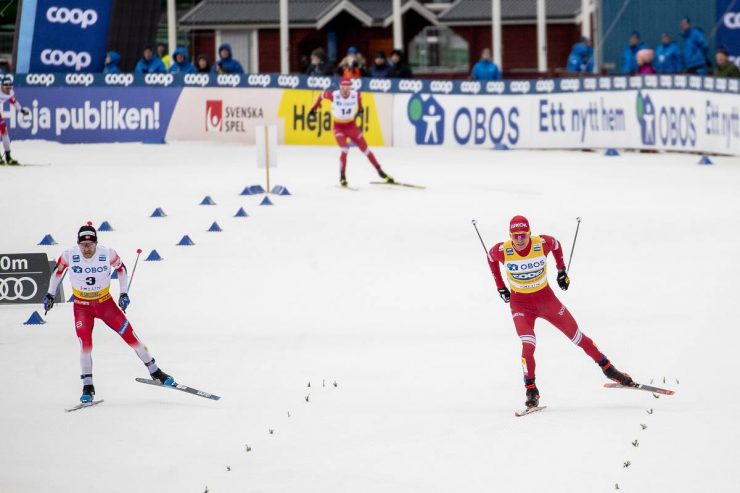 Down to the final meters, Alexander Bolshunov (right) and Sjur Røthe sprint for home in the 15 k skate in Falun. (Photo: NordicFocus)

It came down to the final sprint, and Røthe was outmatched. Bolshunov snuck back around, powering his skis down the track. He created enough of a gap that his victory was certain, and he threw his arms up in the air to celebrate. It was the Russian’s fourth consecutive distance win, and sixth of the season. 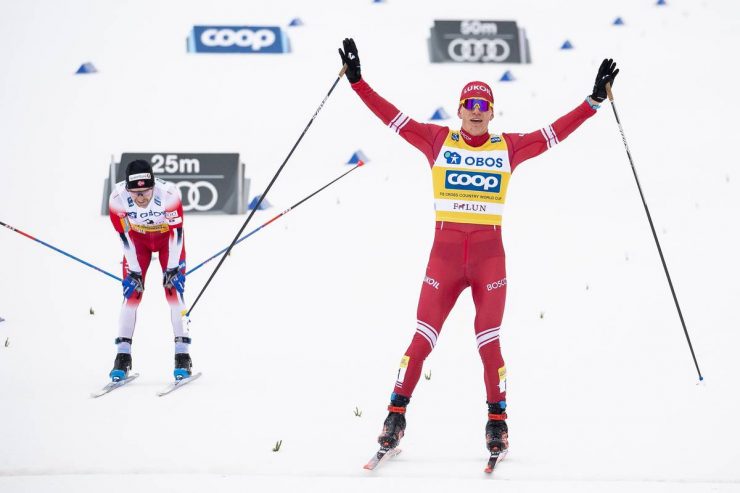 With arms raised, Alexander Bolshunov takes the win in Falun with Sjur Røthe in a close second. (Photo: NordicFocus) 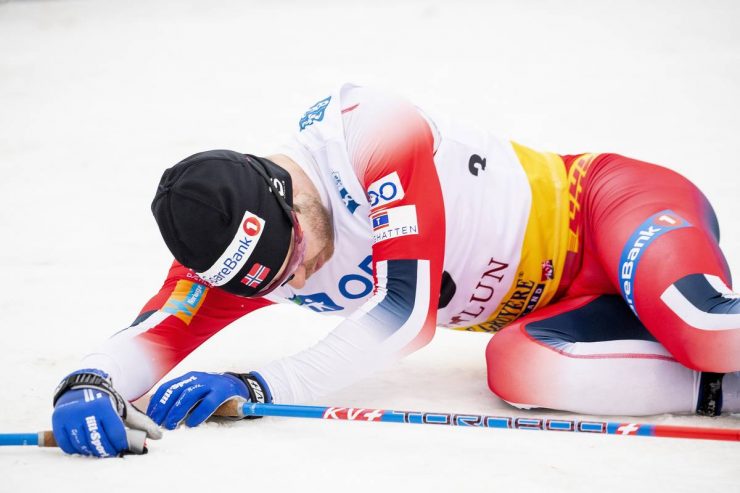 Yakimushkin was next across the line for third (+9.7), followed by Melnichenko in fourth (+10.5) and Holund in fifth (+11.0). The twenty-three-year-old Yakimushkin was 2nd in the event in Toblach, Italy during Tour de Ski and also 2nd at Russian National champs in April 2019.

With today’s result, Bolshunov looks untouchable at the top of the distance standings with 924 points. Røthe sits in second with 596. Bolshunov also leads the overall by over 400 points ahead of the injured boxer, Johannes Høsflot Klæbo. 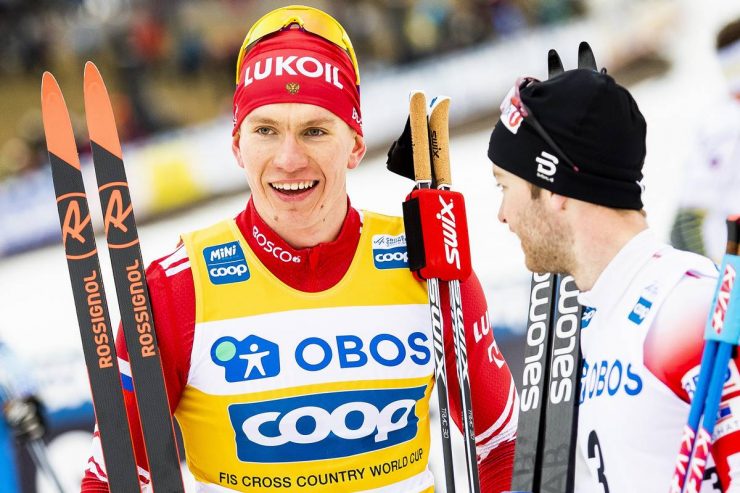 “It was a really hard race because the Norwegian team made good tactics,” Bolshunov told FIS through a translator at the finish. “They always sent someone in front to run the race, so I have to always close some gaps on them and make the most of the bonuses to take maximum points there. Then to make the harder pace on the last lap and to make a good fight with Sjur Røthe at the finish lane.” 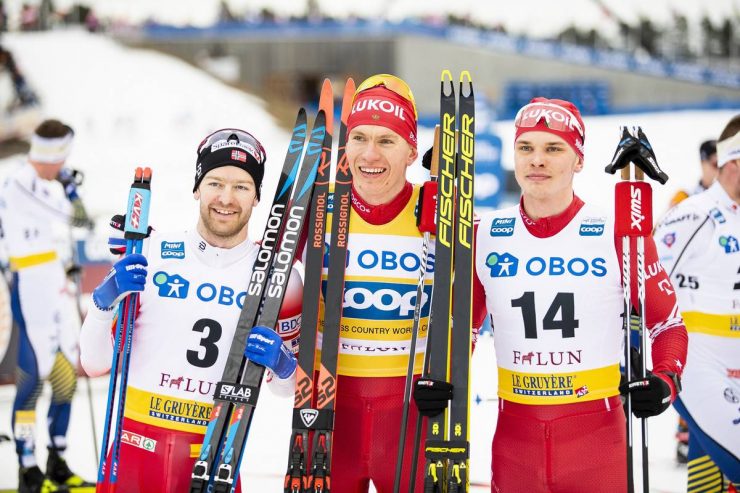 Leading the way for North America, David Norris (USST) skied to a season best result of 24th (+1:22.4). The Fairbanks native has landed in the top-30 on two other occasions this season: 28th in the skiathlon in Obserstdorf, 27th in the 15 k free in Nové Město. He also skied the 30th fastest time of day in the 15 k classiic pursuit in Nové Město and the final hill climb of the Tour de Ski.

For much of the race, Norris hovered inside the top-20, looking to match or improve upon his career best result of 16th, which was achieved in a 15 k skate in Falun last March. 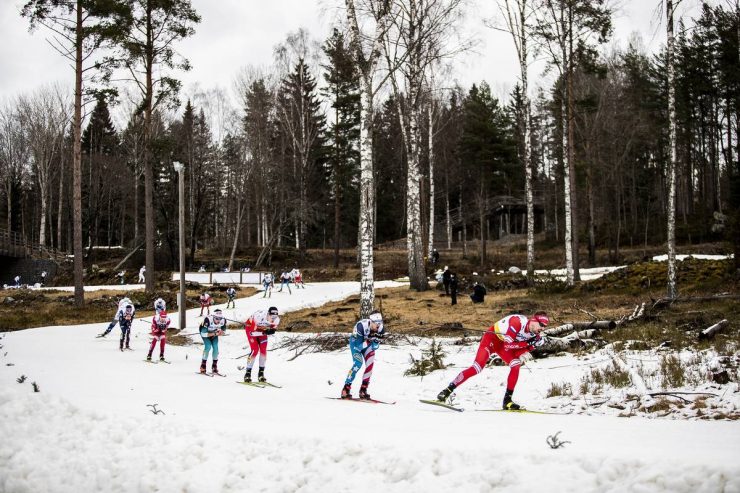 David Norris tucks in behind Sergey Ustiugov (RUS) heading down the ribbon of snow in Falun. (Photo: NordicFocus)

In a post-race interview, shares that he did not originally plan to compete in Falun, sitting out the 30k instead to focus on the upcoming FIS Ski Tour 2020. He also reflects on his race, how mass starts affect the energy moderation strategy he has been honing, and his outlook heading into the distance-focused tour. 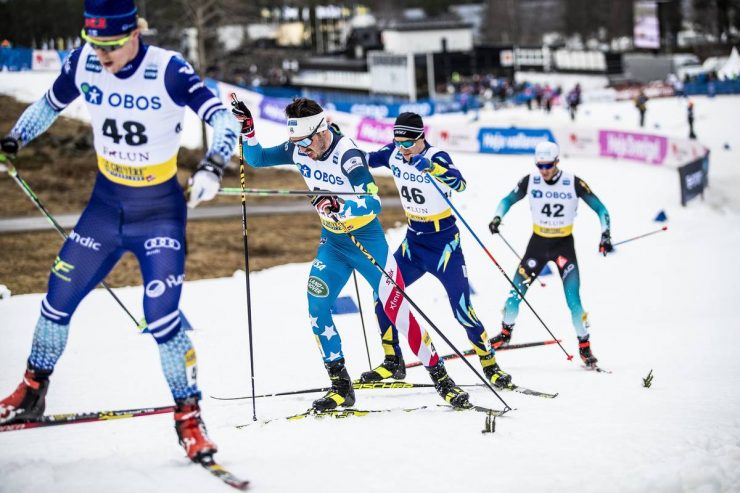 Ian Torchia climbs with the pack in Falun. (Photo: NordicFocus)