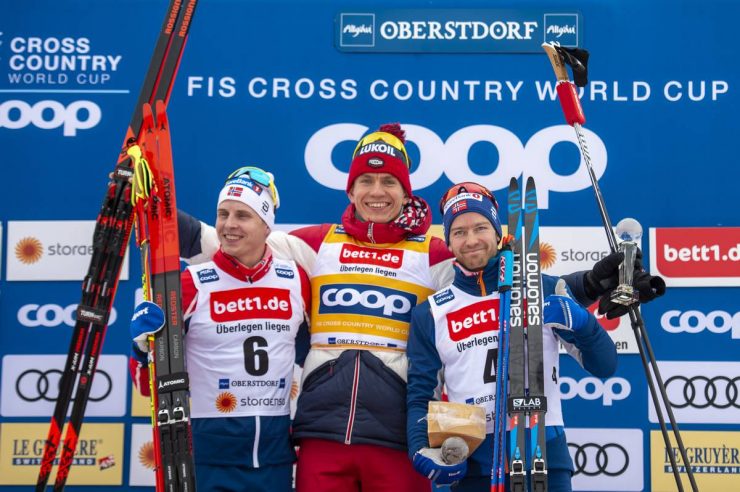 And the World Cup beat goes on. Nearly 70 men lined up in Oberstdorf, Germany for a 15/15-kilometer skiathlon, battling across techniques in front of a Bavarian Alp backdrop. The venue will be the home of the 2021 FIS Nordic World Ski Championships.

The 3.75 k course in Oberstdorf featured a variety of terrain, with the Burgstall hill climb bringing athletes to the high point of the course. To increase the pulse in the long race, four rounds of 15 World Cup bonus points were available at the 6.2, 9.9, 21.2, and 24.9 kilometer checkpoints in addition to those awarded to the top 30 athletes at the finish.

Russia’s Alexander Bolshunov looked to repeat his skiathlon victory in Lillehammer, preserving his position at the top of the distance standings and becoming the third athlete to win multiple skiathlon events in a season. Norway’s Martin Johnsrud Sundby did this in 2015/16 and Germany’s Tobias Angerer did so in 2005/06. Piggy backing on his back-to-back wins in Nové Město, a skiathlon win for Bolshunov would mark a third consecutive win. 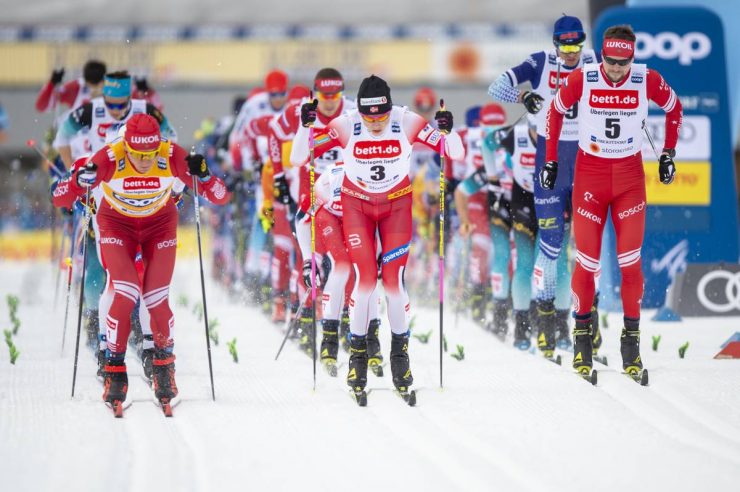 And they’re off! Skiers take to the course in Oberstdorf for the 30 k skiathlon. Johannes Høsflot Klæbo (bib 3) dropped from the race during the classic leg. (Photo: NordicFocus) 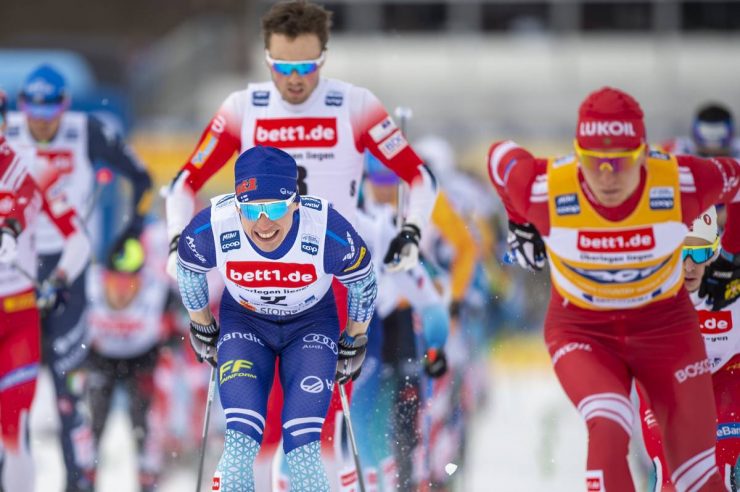 Iivo Niskanen (center, bib 2) sets out to lead the classic leg of the 30 k skiathlon in Oberstdorf. (Photo: NordicFocus)

However, it was not the Russian that took the reins off the line. It was the Finns. In particular, Iivo Niskanen who has historically proven his capacity in distance classic events and more recently demonstrated his ability to skate with the best in the world. Niskanen led at nearly every checkpoint over the first 10 k, taking the maximum points at both 6.2 and 9.9 k.

Then things began to change. Bolshunov led at the exchange with a train of Norwegians on his heels. Sjur Røthe, Simen Hegstad Krüger, Hans Christer Holund, and Sundby, who had all taken a conservative approach to the classic leg, were now within 3.5 seconds of the Russian. Fading quickly from his position at the front, Niskanen sat nearly 30 seconds back in 9th. 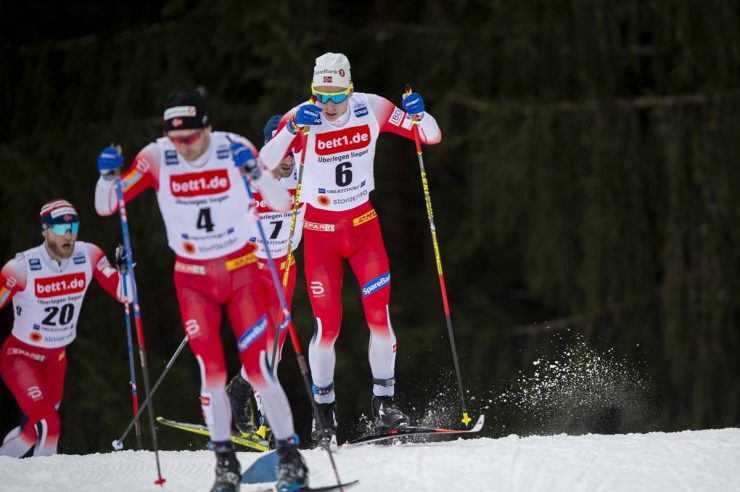 A Norwegian power train in the 30 k skiathlon in Oberstdorf. (Photo: NordicFocus) 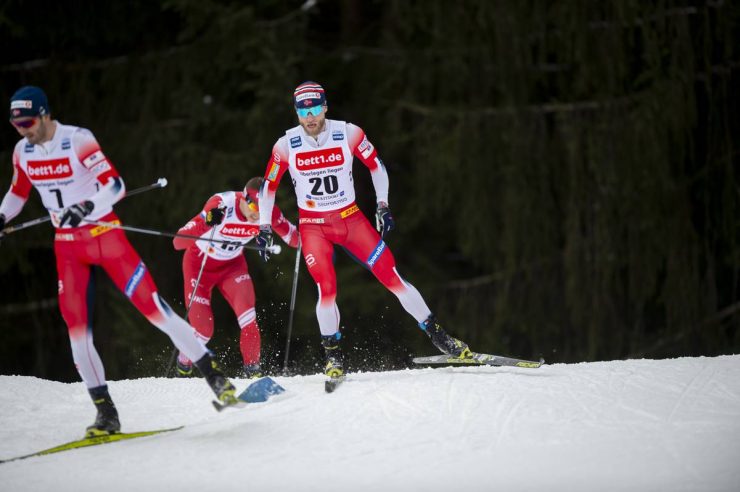 Up the hill and around the bend, Hans Christer Holund (NOR) leads Martin Johnsrud Sundby (NOR) and Andrey Larkov (RUS) during the 30 k skiathlon in Oberstdorf. (Photo: NordicFocus)

And so it was through the next wave of bonus points at 21.2 k. Røthe took the full 15, with Krüger, Bolshunov, Holund, Andrey Larkov (RUS), and Sundby close behind.

Rebounding from his large deficit, Niskanen had slashed his gap in half and was continuing to catch the lead pack. He rocketed his way back to the front by the 24.9 k checkpoint, collecting another 15 bonus points before being swallowed once more by the group. 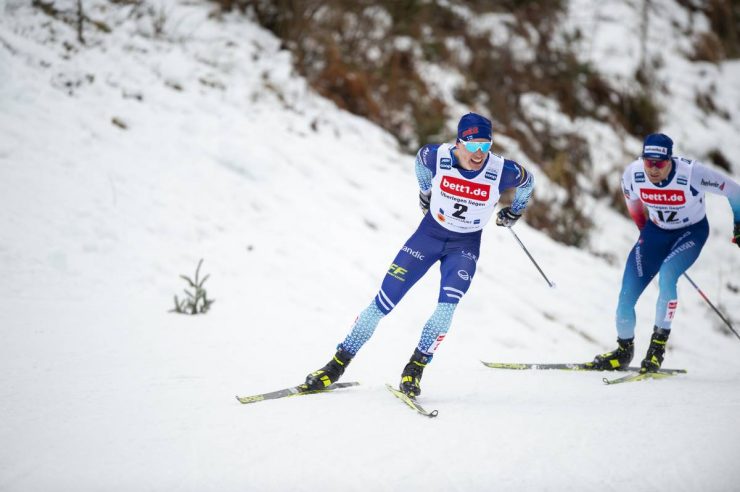 Rebounding from a deficit, Iivo Niskanen closes the gap to the lead group in the 30 k skiathlon in Oberstdorf. (Photo: NordicFocus)

With just over a kilometer to go, the top seven men were separated by less than four seconds. The pack included the four Norwegians, two Russians, and Switzerland’s veteran Dario Cologna.

Taking the lead on a downhill and holding it on the final climb over a bridge just before the stadium, Bolshunov made his move. With Røthe and Krüger in hot pursuit, the 23-year-old Tour de Ski Champion powered down the final stretch to stop the clock at 1:13:40.6. Krüger took the next podium spot (+0.9), followed by Røthe in third (+1.2). 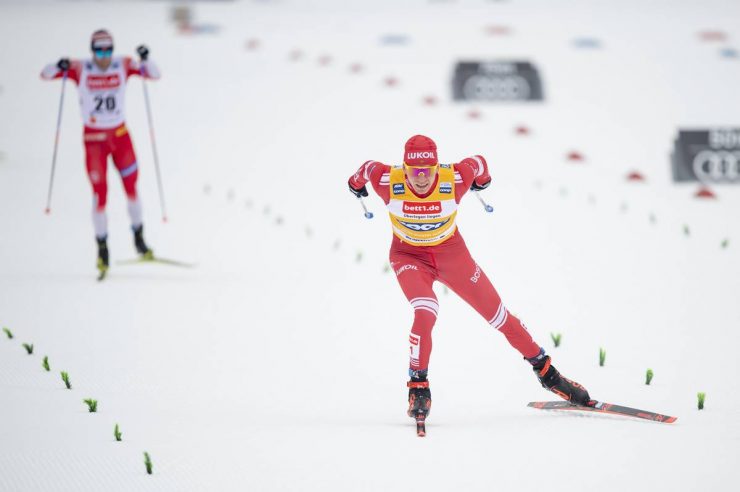 Alexander Bolshunov sprints for the win in the 15/15-kilometer skiathlon in Oberstdorf, Germany. (Photo: NordicFocus) 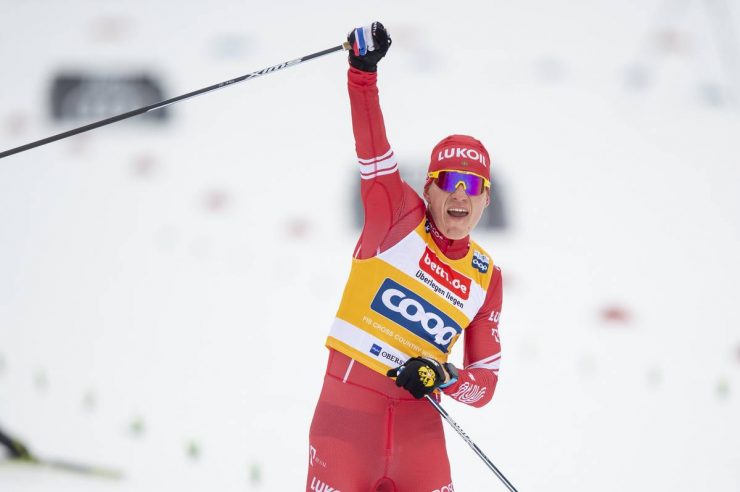 “I’m very happy to win today on the course in Oberstdorf which will be used next year in the World Championship,” Bolshunov told FIS at the press conference through a translator. “The course became much more difficult and more interesting to compete on. For sure, we will see how it will be next year.”

When asked how he worked with the group that emerged at the front, Bolshunov responded, “It was [my] own race.” 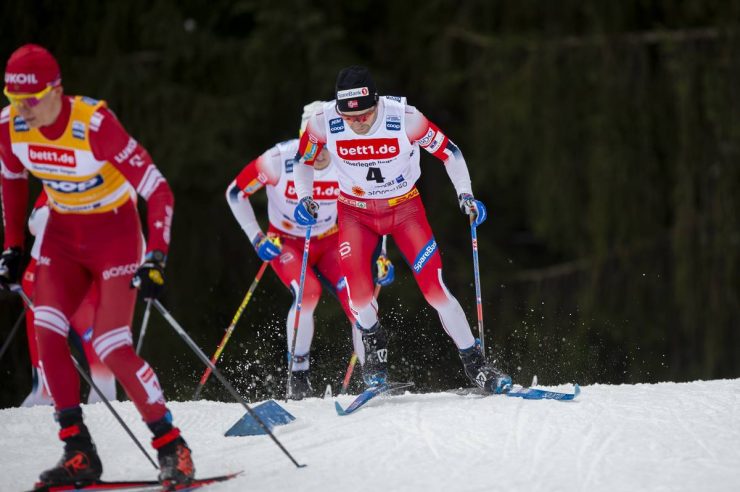 “He really played a little [with us],” Røthe told NRK about Bolshunov’s tactics. “There were four mice against a cat out there.”

Just off the podium, Sundby took home the wooden medal with 4th place (+2.5).  It is the 35-year-old’s best result of the season, though he has been unable to do much racing due to a back injury. In fact, Sundby’s last result came in early December in the skiathlon in Lillehammer, where he took 5th. Sundby has won three skiathlon events in his lengthy career, and holds the rare statistic of earning a spot on the podium in 12 seasons, the third-most of any World Cup athlete.

Johannes Høsflot Klæbo and Emil Iversen left us scratching our heads. After a poor start to the classic leg, both athletes dropped out. Klæbo’s DNF dropped him from third to fifth in the distance standings, though he remains in second place in the overall, trailing Bolshunov by 299 points.

“I do not know,” Klæbo told NRK, according to a translation. “It’s been a long time since I felt as bad as today. It was really just the whole day and nothing that felt particularly good. If I can’t fight for the top 30, then there is no point going around here.” 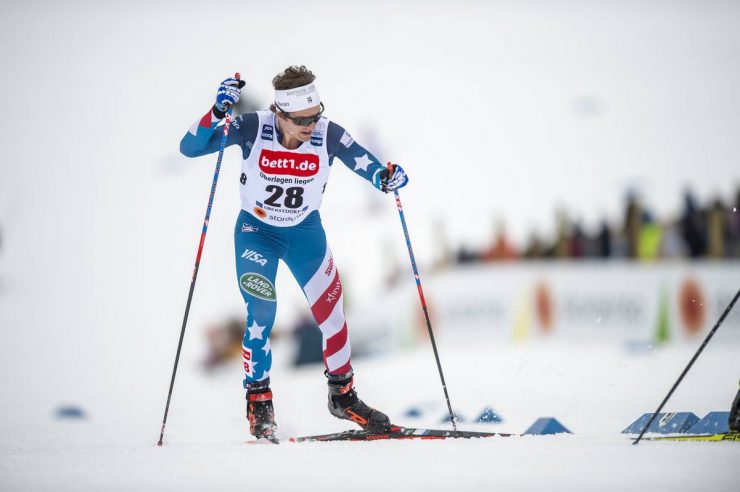 David Norris skis to 28th in the 30 k skiathlon in Oberstdorf. (Photo: NordicFocus)

The sole American finisher David Norris landed inside the points in 28th (+2:01.0). The Fairbanks native hovered around this top-30 position throughout the race, reaching a peak placement of 20th place at the 9.9 k checkpoint.

“My plan going into the race was to use the classic leg to put myself into good position for the skate,” wrote Norris in an email. “You never know how your body will feel 15 or 20 km’s later so you have to risk it a little. I was happy with my classic skiing and I had moved up into a group on the last lap of the classic which was roughly positions 15 – 22. Unfortunately, over the top of a hill my klister iced up and I fell. That moved me back a few groups to about position 32. Overall my skis were very good, but the snow was variable and the tracks were breaking down.

“In the skate leg I intentionally kept a little in reserve during the first 10km trying to ensure I’d have some energy in the last 5km. I slowly worked up through some guys and felt really strong throughout the skate.”

Norris expressed that the techs did a great job selecting skis and choosing wax given the variable conditions in Oberstdorf. He added that he feels good about the performance and his sensations on course, though he has not felt this way leading up to the event.

“I feel fit. It has been odd that in training I don’t feel very good – tired and kind of flat, but I’m feeling pretty strong the past couple of races. In the skate leg I intentionally kept a little in reserve during the first 10km trying to ensure I’d have some energy in the last 5km. I slowly worked up through some guys and felt really strong throughout the skate.” 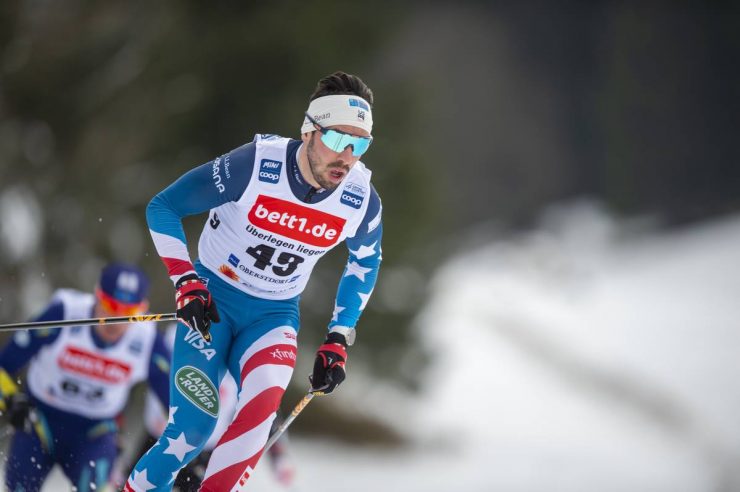 Ian Torchia on course during the 30 k skiathlon in Oberstdorf. (Photo: NordicFocus)

Ian Torchia also began the race but did not finish. He was one of seven men to drop from the race. An additional three were lapped and therefore pulled from the competition.

“I felt very bad out there today,” emailed Torchia. “I started flooding very early on while moving backwards in the pack. Very confusing as I felt better this week compared to Nové Město leading into the race. Hopefully a week in Seefeld and some consultation with my coach will put me on the right track.”

In a post-race call, Matt Whitcomb expressed pride in Norris’s grit and dedication to the process of becoming a World Cup contender. He also provided insight into both today’s event, including how Norris’s crash affected his position in reach of the top-20 and Torchia’s DNF.

Whitcomb also explained that Erik Bjornsen, who did not compete today, may return to the World Cup in Lahti after the FIS SkiTour 2020. In the meantime, Bjornsen has his eyes set on domestic distance classics, including the Boulder Mountain Tour and the American Birkie. 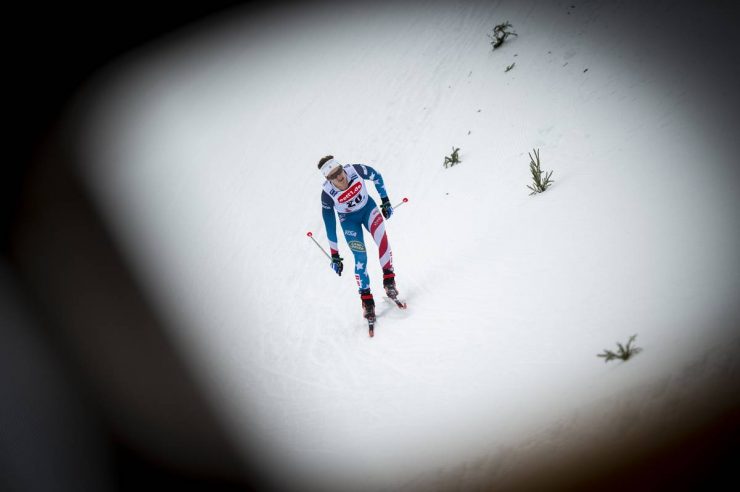 Recovering from a inopportune crash, David Norris fought to the point of wobbly legs in the last classic lap of the 30 k skiathlon in Obsertdorf. (Photo: NordicFocus)