Before we begin, if you have not heard of the Mount Marathon Race, which takes place annually on the Fourth of July in Seward, AK, watch this video. If you’re short on time, fast forward to the six minute mark to witness racers scale the direct route up the mountain which towers over the town, about 3,000 vertical feet in less than two miles. They then cascade down a harrowing descent, a semi-controlled fall down loose rock, snow, and rocky ledges before a final pavement sprint to the finish.

Mount Marathon is not the only race of its kind. Runners compete around the globe in technical mountain races of varying distances in the Sky Runner Series, and in the US, hundreds of racers “push peaks” up and down Western ski resorts in the Cirque Series. This is only a small subset of the hundreds of events that send runners through grueling terrain up and down peaks and along ridges.

In the list of past Mount Marathon champions, there are several familiar faces, including Kikkan Randall, Holly Brooks, David Norris, Scott Patterson, and Jessica Yeaton. This begs the question, why do some of the best skiers in the country put their bodies at risk racing through potentially high consequence terrain? Is it worth the potential setback from a bad fall that sidelines you from training? 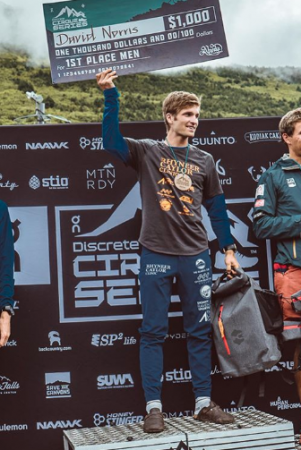 To answer these questions and get a deeper look into mountain running, specifically the Mount Marathon Race and the Cirque Series Alyeska race, FasterSkier spoke with Jessica Yeaton (APU/Australia XC Ski Team) and David Norris (APU) who have racked up a slew of wins in these races.

Norris is a two time Mount Marathon winner and course record holder. In 2016 he bested the time of world renowned mountain athlete Killian Jornet. Norris chose to sit out this year’s event due to the smoke-induced poor air quality. Norris also won the Cirque Series Alyeska race in 2017 and 2019 and took third in between.

In 2018, Yeaton won the Cirque Series race and both members of the duo won Mount Marathon — this is a perfect record for Yeaton as she has only entered each race once. (Fellow APU athlete Rosie Frankowski was the female Cirque Series Alyeska winner in 2019.) A nagging hamstring injury has kept Yeaton from incorporating doing much running into her training over the last year, keeping her out of competition.

At the time of the conversation, the couple was wrapping up a road trip from their home base in Anchorage through Western Canada and south through Montana, Wyoming, and Colorado before reaching their final destination of Albuquerque, NM where Yeaton begins Physical Therapy school this fall. She will continue to train and compete in skiing but acknowledges that her race schedule will look different this season as she will be navigating around the academic calendar. 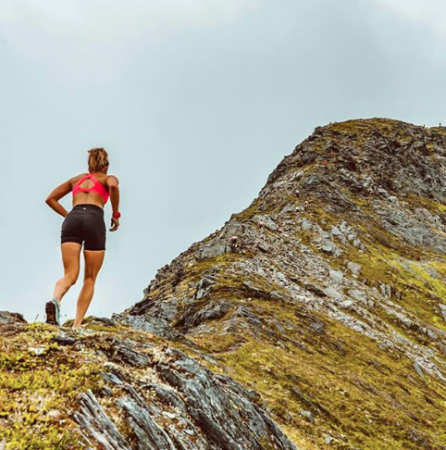 Apart from dealing with a lingering cold through June, Norris is feeling fit and putting together a solid summer of training. He shared that he is “looking forward to November.”

As both Norris and Yeaton are primarily focused on ski racing, they take a slightly different approach to these races than athletes targeting mountain running. Rather than training specifically for Mount Marathon or Cirque Series, they use the efforts to compliment their high volume of training.

“The race itself is really good training for ski racing and the downhills are the only risky part,” said Norris in a call. “The uphill and cross country side of mountain racing is super good for our training. Usually, we don’t taper for the races, we just add it into the week’s schedule, so instead of hammering out intervals on Friday, we’ll adjust the workout to a speed session then do the race Saturday as our intensity for the second half of the week.”

While this strategy might not be attainable for the average racer, Norris and Yeaton explained that they capitalize on their fitness and power to excel on the uphill, cushioning their lead so they can ease up and stay in control on the downhill, which they believe minimizes the risk of sustaining an injury. This allows them to reap the benefits of a race effort without the danger of halting their otherwise steady progress in skiing.

“I think we’ve been kind of fortunate that in a lot of these uphill races that include technical downhills, if you have enough of a lead [on the uphill], you can stay within your comfort zone [on the downhill], and I don’t think the risk is absurdly high,” explained Norris. “What’s always made me nervous about Mount Marathon is if I were to get to the top in second or neck-in-neck with someone, then I don’t know if I would hold back. With my competitive nature, I think I would hammer the downhill and try to win, and that’s when I think it becomes more risky and that’s when you’d have to decide if that was the right thing for cross country skiing and the training.” 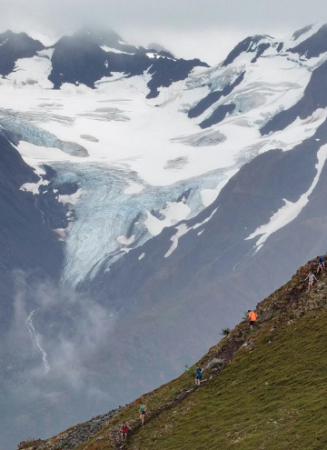 Look closely to see athletes ascend a steep ridge on the shoulder of the Alyeska Ski Resort during the Cirque Series race. (Photo: Instagram @cirqueseries)

As they would with any summer race, both athletes discuss their race strategy and their decision to enter with their coach, Erik Flora. Both agreed that he is on board with them racing but might not advise all of his athletes to do so.

“In my position, being injured, definitely I could enter races and do them and just continue to go down that path, and [Flora] would definitely advise against that,” Yeaton stated. “But if you’re in a place where you’re not battling injuries and you’ve been running and practicing downhills a lot, which is where I was two years ago leading into Mount Marathon, then he was totally supportive of that. A lot of it is knowing your boundaries and knowing what you’re capable of.

“It’s something that is on a case by case basis,” she continued. “Because some athletes are constantly battling injuries and are less skilled at technical running, he’d maybe advise against entering these races, but I think a lot of us can handle that.”

For the skier interested in trying a mountain race, Norris explains that not much alteration to typical summer training is necessary as the fitness will already be there. However, as with mastering any skill, practice and time moving through the type of terrain encountered during the race is valuable.

“For the uphill, all the rollerskiing and the hill bounding and plyometrics are awesome training for running uphill, so I think most skiers have good leg strength and aerobic capacity to climb hills fast,” Norris explained. “Then, it seems like for the descending, my downhilling has improved a bunch just since moving to Anchorage, because growing up in Fairbanks it’s more trail running and just dodging roots. In the afternoons, I do a lot of two hour runs that are just roaming around in the mountains. Once you get above treeline, you don’t really need trails, so you’re just scrambling around on ridges. I think my footwork and my agility has improved by just training out there a bunch. Not necessarily doing drills out there, but just the time and running trails in that terrain.”

Descending is not the only aspect of mountain running that requires practice. As the ascent often requires using hands and arms to scramble and navigate around steep rooty and rocky ledges, this too requires technique and practice to develop efficiency.

“For me, it was just practicing the uphill enough and being in good enough shape and knowing that I could be in front on the uphill,” Yeaton shared. “Then knowing that I could get down the downhill fast enough without putting myself in a risky place. So trying to make up all my time on the uphill, because that’s such good training for skiing — and that’s our strength is fitness. If you can get in a place where you’re already putting time on people on the uphill, then you don’t have to necessarily put yourself at risk, which I think is a really good tactic when you’re ski training.”

For the novice athlete interested in trying one of these races, Norris recommends developing enough stamina to feel strong throughout the event and also moderating effort to prevent the mental haze that can result from overextending one’s physical capacity.

“At any level, if you’re a first-timer going into it, just being fit enough that when you get to the top, your legs aren’t wobbly or shaking under you, because I think that’s where the risk would really increase is if you’re totally fried and you’re just trying to make it back to the bottom. I think with skiers, you start running down the hill for five or ten seconds and you’re already starting to recover. Your legs are strong and you’re able to maneuver downhill safely. But if you’re totally new to the sport and you got to the top of the hill and you’re cramping and crumbling, then your risk of just getting down is so much higher because your legs are so tired.

“Good advice for first-timers is to stay within yourself so that you have the energy and strength to maintain coordination for the downhill,” he said simply. 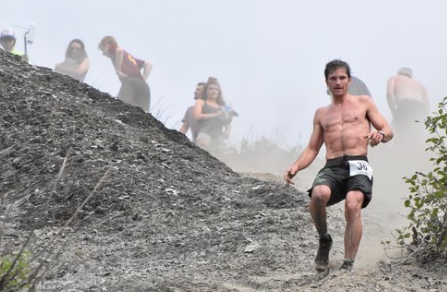 Even though gravity is in the athlete’s favor during the descent, the difficulty should not be underestimated. Running downhill forces the legs, particularly the quadriceps, to work eccentrically, meaning the muscles are lengthening while under stress from the force of each footfall. Essentially, the tension in the muscles is preventing the legs from collapsing, versus the pulling forces from the glutes and hamstrings which power a runner forward or upward.

Ever had to walk down the stairs backward after a hard downhill run or hike? This type of work causes muscles to fatigue quickly or potentially to fail if they are not properly trained and is correlated with increased muscle soreness after the activity.

For any athlete looking to try a mountain race, it is important to spend some time running downhill beforehand to condition the legs to sustain this toll.

“Just in training, we jog around really easy then you start going down the hill and you realize your legs are getting super fatigued and tired on the descent. It’s deceptively hard to just run downhill,” Norris emphasized.

While no races are on their calendars at this point, both are eager to jump into more mountain races in the years to come. The couple agreed that they would like to find ways to race outside of Alaska; this has been tricky for Norris as his travel budget is focused on the winter race season, but as Yeaton will be based out of Albuquerque for the next two years — “closer” to the other Cirque Series races — both hope it might be possible in the near future.