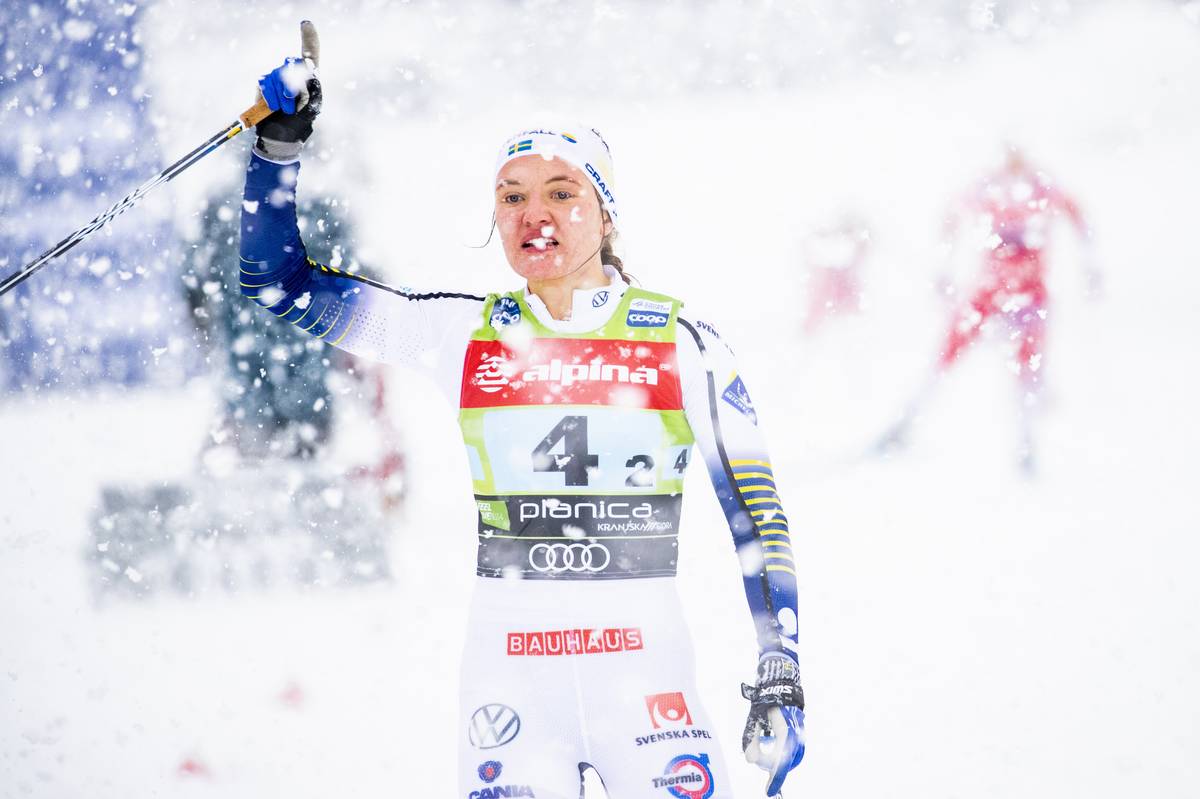 With the tight racing and jostling for position the team sprint presents, another factor was in the mix during Sunday’s Planica, Slovenia women’s 7.2-kilometer freestyle team sprint: big, fat, and plentiful snowflakes.

Saturdays’ rainy, and lightning ridden sprint racing on an artificial snow loop, had a 180-degree backdrop flip-flop with a white winter arriving in Planica in time for the holidays and a World Cup TV broadcast. A several inch veneer of fresh snow covered the tracks.

Coming into Sunday’s race, recent team sprints have been dominated by Sweden. They have won four consecutive team sprints, and six of the last seven. And as much as last season’s World Cup Sprint Crystal Globe winner Stina Nilsson is a rock for the nation, Sweden’s team sprint reign owes much to Maja Dahlqvist. She’s been part of a Swedish three-peat: Dresden (skate) 2018 with Ida Ingemarsdotter, Lahti (classic) 2019, and again in Dresden (skate) 2019.

Sunday, to close out Period I on the World Cup, Dahlqvist was paired with Sweden’s newest World Cup upstart, Linn Svahn, 20, on team Sweden II. On paper at least, the coaches gave the nod for team I designation to Nilsson and Jonna Sundling.

With ten teams represented in the final, the U.S. pairing of Sophie Caldwell and Julia Kern looked formidable. Fresh off Kern’s first career World Cup podium on Saturday and Caldwell’s near podium miss in fourth, they placed second in the team sprint semi-final B to Switzerland’s Laurien van der Graaf and Nadine Faehndrich. The Swiss won that heat by 1:05 over the U.S. (Caldwell and Kern were also teamed up last season in Dresden’s team sprint where they placed fourth in a photo finish.)

Also represented in the final and a usual podium snagger was Norway I with Maiken Caspersen Falla, and Ane Appelkvist Stenseth. Despite their perceived dominance, Norway has not won a team sprint in the last seven attempts. The last women’s team sprint victory for the storied nation came way back in January 2014, when Maiken Caspersen Falla and Ingvild Flugstad Østberg won the classic team sprint in Nové Mesto. Although Falla is proven, Stenseth, 24, is a World Cup podium-contender newcomer. According to FIS, she has contested 10 World Cups. She’s placed fourth twice in individual races — most recently in Ruka’s classic sprint last month. 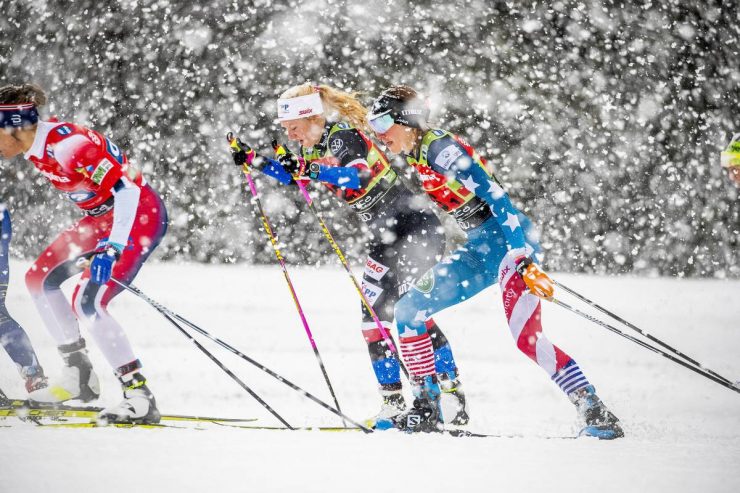 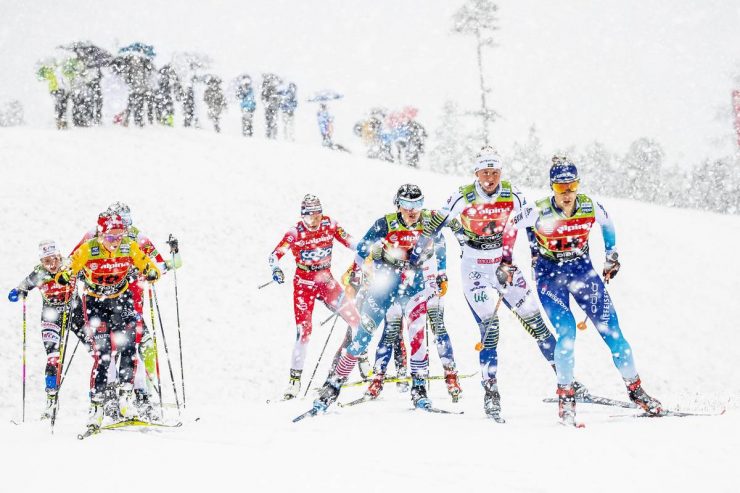 With the wins and losses stats laid out, the final was a race around, tag the partner, race around, repeat affair for several laps. With near blinding snow and slow tracks, teams skied conservatively with no attacks of note.

The single blip to the pack racing early on was the collapse of an inflatable arch across the course due to a heavy snow load. Several course attendants scurried to right the arch. There was no stop to the racing, only a momentary snafu to an otherwise peaceful snowglobe scene. 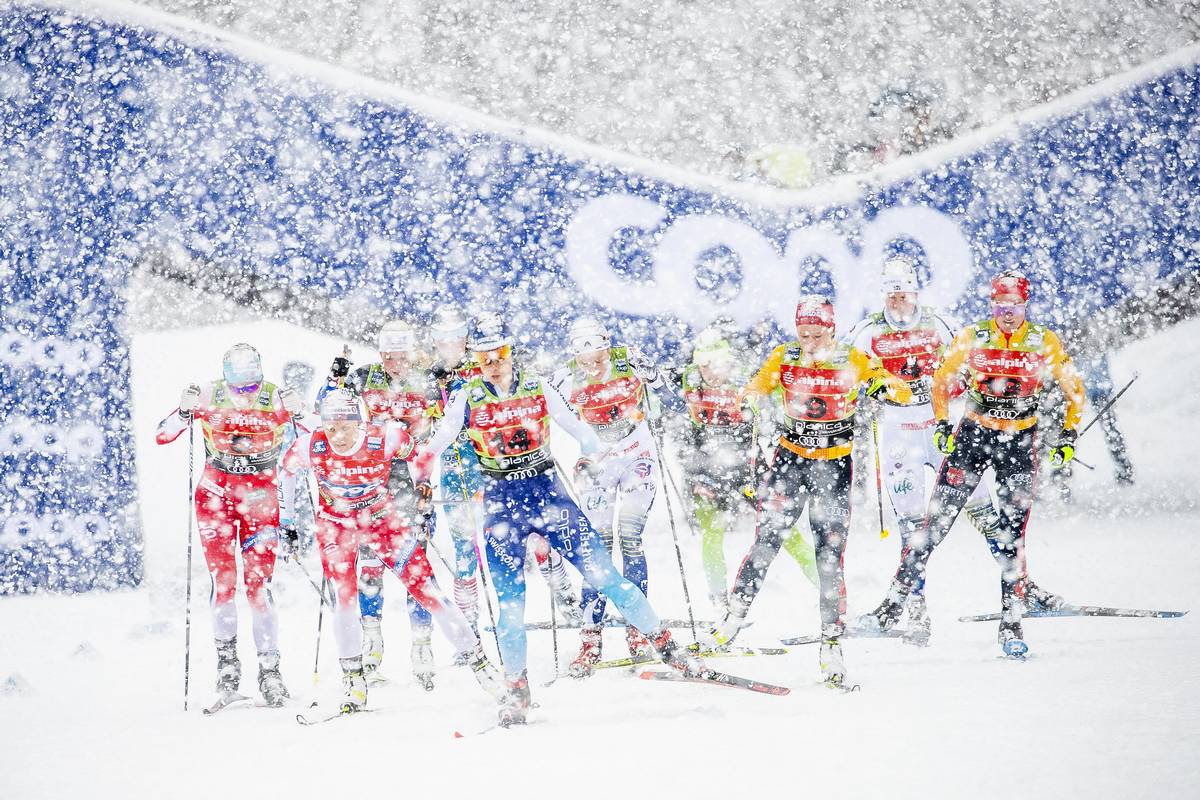 That all changed on the fifth of six laps total. At the base of the course’s first climb, Nilsson for Sweden I had been tucked into the pack. She worked her way to the right gliding out of traffic for a clear lane to the top. She jump skated to the lead 15:00 minutes into the final. Carrying her speed into a working downhill, Nilsson broke the race apart.

Sweden II (Dahlquvist), and Norway I (Falla), were the other two teams able to match Nilsson’s push at the sharp end.

Sweden I, Sweden II, Norway I, Norway II, Switzerland, and the U.S. came through the final tag first through sixth, respectively, with a 7.8 second gap from the U.S. in back to Sweden I in first.

Late on that final lap, with 18 minutes of racing elapsed, Sweden I and II, as well as Norway I looked to be the podium in the making. But with perhaps the race effort of the day, Switzerland’s Faehndrich began reeling in the three team group. Twenty seconds later, the Swiss were locked on, making it a four team affair. 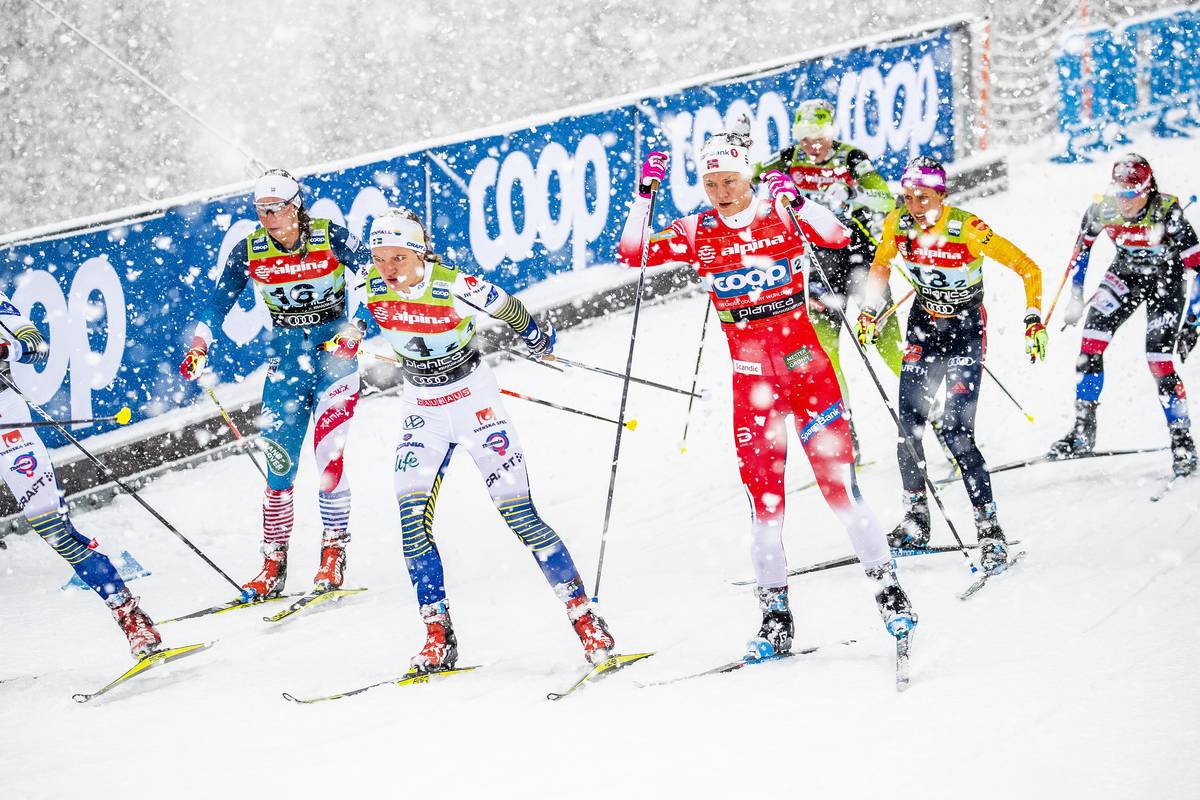 On the final climb, Sweden I and II accelerated, dropping Norway I, with the Swiss matching for a moment, then dropping back slightly for a solid third place nearly guaranteed. 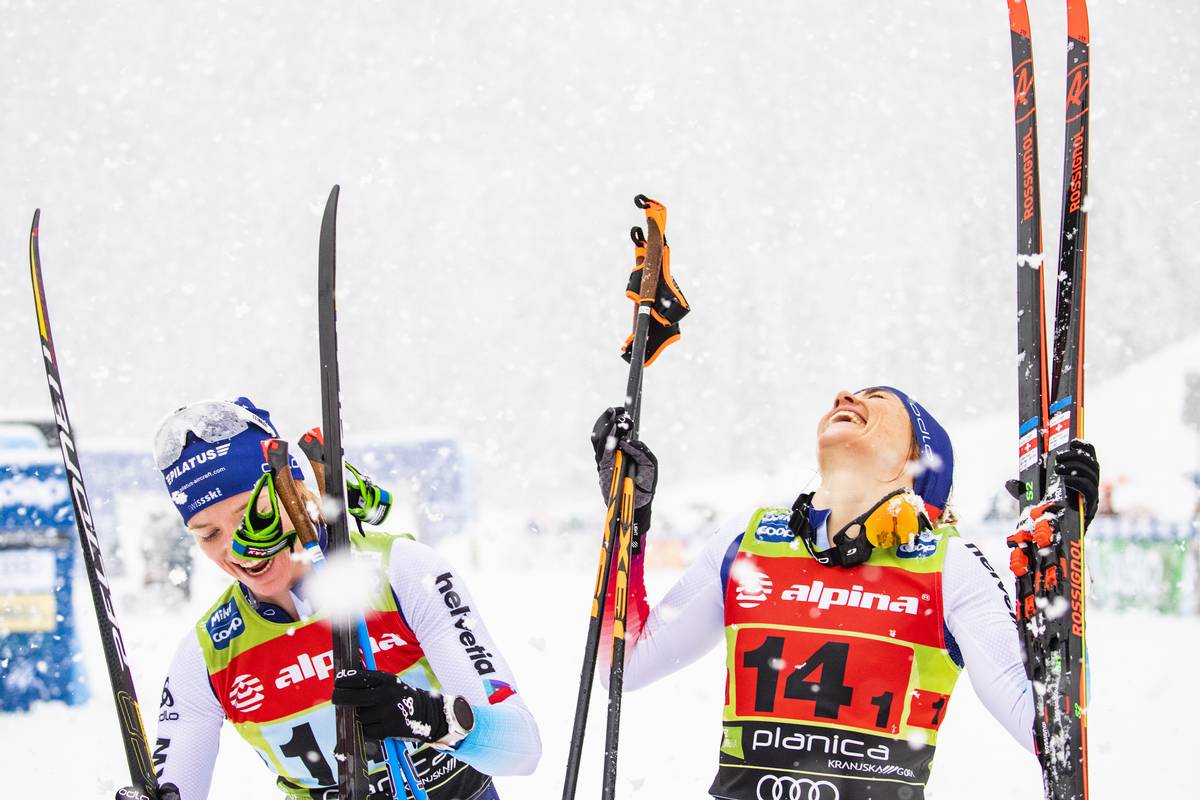 The joys of the podium: Swiss teammates Nadine Faehndrich and Laurien Van Der Graaf (l-r) after their third place in the team sprint in Planica, Slovenia. (Photo: NordicFocus)

“I am happy that after a couple of fourth and fifth places it finally worked out,” van der Graaf stated, according to a translation from the Swiss Ski Federation. “When I tagged off to Nadine in fifth place I was very confident that she would make it.”

Fähndrich said: “For me it was optimal that the top 3 didn’t go all out early on. Thus I could catch up and still had enough energy in the end.” 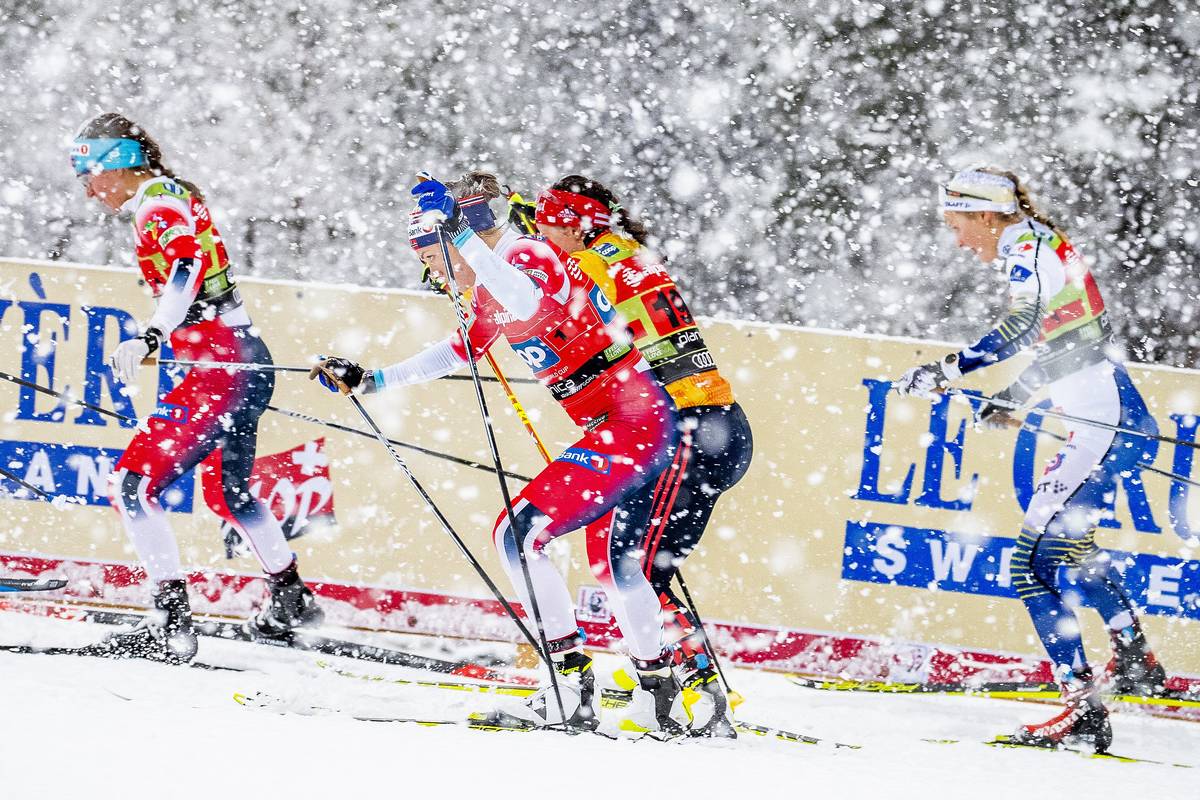 On the ski-wax service side of the race, U.S. World Cup Coach Matt Whitcomb explained in a post-race interview that today’s team sprint included a rule that no team could modify skis during the races. In team sprint additions past, it was common to see trackside techs applying and buffing a topcoat between relay legs. According to Whitcomb, Caldwell’s skis for the final were simply not in play. “So we made a mistake early in the finals,” said Whitcomb. “We had to eat it. And we did.” 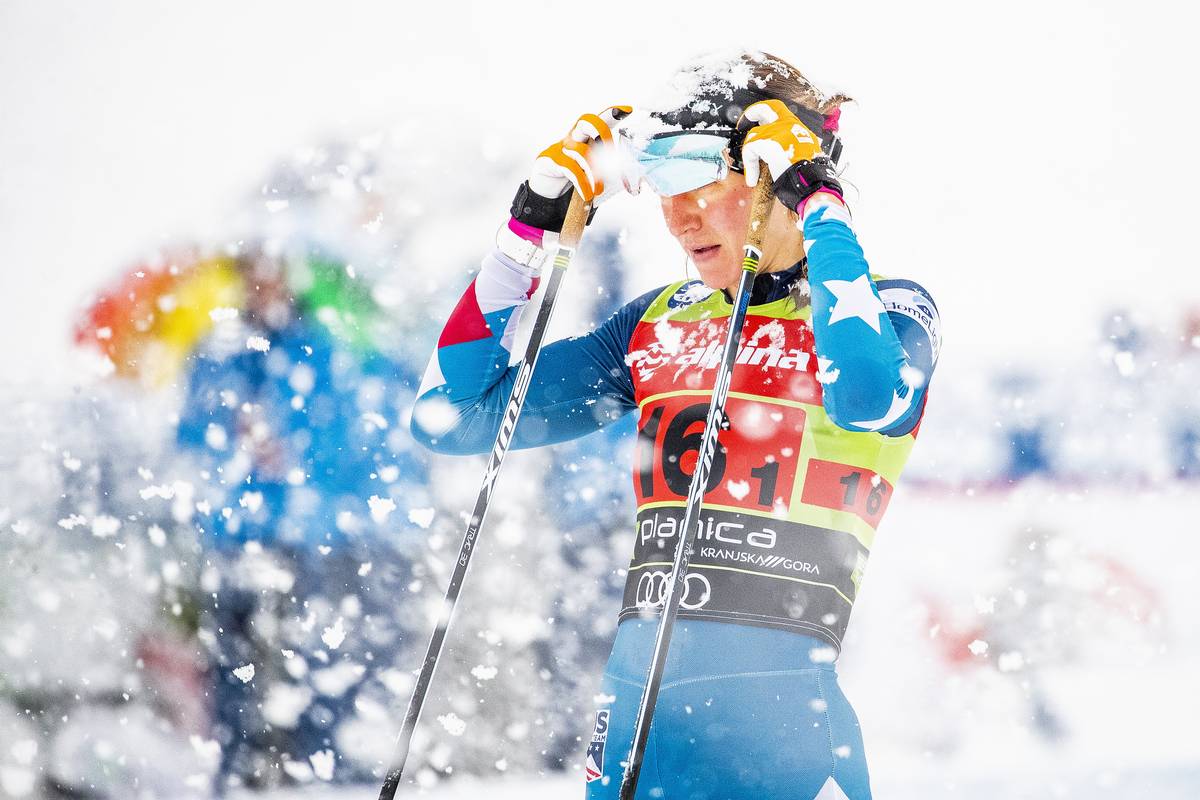 FasterSkier will have a Period I breakdown and Tour de Ski preview later this week. The Tour de Ski begins on December 28. 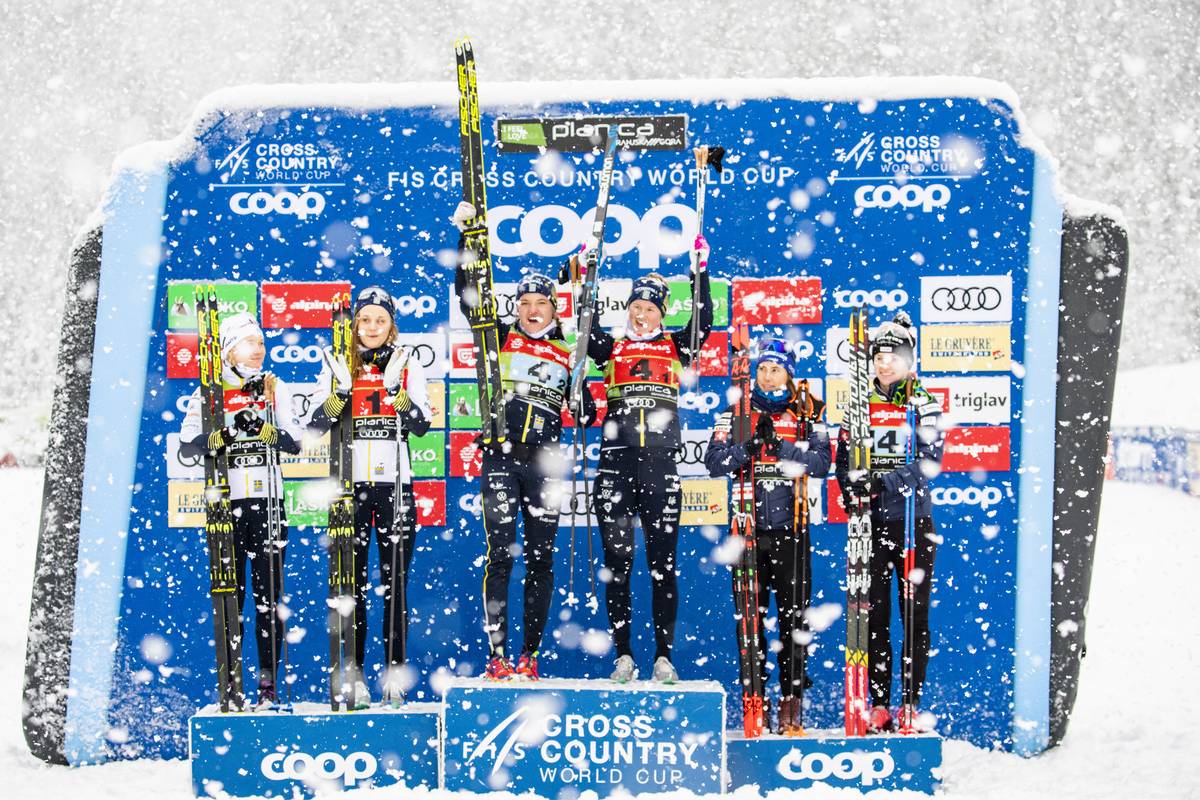