ANCHORAGE, Alaska – Thursday morning, University of Alaska (UA) President Jim Johnsen announced that the NCAA had declined to reach the school’s waiver request that could have led to the end of NCAA skiing in both Anchorage and Fairbanks. Thursday afternoon, the UA Board of Regents officially voted to support the president’s recommendation to leave both schools’ athletics teams intact.

Thursday evening, it was time to celebrate. The previously scheduled #savealaskaskiing rally in Midtown Anchorage quickly became rebranded as something more jubilant. The food trucks were still there, the DJ was still there, and the supporters were still there, a cross section of the Alaska skiing community past and present. But the mood was suddenly upbeat rather than funereal.

The Alaska Dispatch News reported that a crowd of “about 250” gathered on the lawn outside the Anchorage public library. FasterSkier estimates the crowd size as closer to one third of that. But no matter their numbers, they were there, and they were happy.

“This is a huge relief for all of us [on the University of Alaska Anchorage (UAA) ski team],” said Charley Field, a junior alpine skier from Pemberton, B.C., addressing the rally. “I’ve never felt so relieved.”

Field recounted that she had applied to only a single school, UAA, when making a college choice, and was thrilled to be able to continue there. “I’ve always wanted to graduate as a Seawolf,” Field said.

Another athlete, nordic skier Casey Wright, also spoke. The junior skier and Australian national had been defiant even in the face of adversity, telling FasterSkier two weeks ago – the day after news first broke of the ski team’s apparent demise – that “we’re going to rally together, and we’re going to have a memorable season.”

Wright was happier at the rally, but no less confident. “We’re all going to try our absolute best to kick some butt” this year, she told the crowd, “and show everyone what it means to be a Skiwolf.”

A common theme among all the speakers was heartfelt gratitude at the groundswell of support from across the state and around the world.

“I can’t say thank you enough to all the people who wrote letters and signed the petition,” Field said. “We’re so blessed.”

André Horton, an Anchorage native, former member of the U.S. Alpine Ski Team and one of the guiding forces behind the formal #savealaskaskiing movement, expressed similar sentiments.

“At one point yesterday,” Horton said, “the Board of Regents was getting one email [from #savealaskaskiing supporters] every two minutes. … I think if I were them, I would be uninstalling Outlook right now.”

Horton audibly choked up as he addressed the assembled crowd. “They say there’s a rivalry,” Horton said, in reference to perhaps exaggerated antagonism between Anchorage and Fairbanks, “but when someone threatens our sport, we all pull together.”

(A contemporaneous march in Fairbanks also featured strong turnout, including at least one marcher dressed as a polar bear in homage to the University of Alaska Fairbanks mascot, the Nanooks.)

“It’s amazing how fast this community came together,” Brooks said from stage. The sheer numbers of people who signed the petition (over 5,000 as of Thursday evening) show “how amazing this small ski team is.”

Brooks attended Whitman College in the early 2000s, and skied collegiately there. But the Whitman ski program was cut a few years after she graduated. “That pulled at my heartstrings,” Brooks recounted, “and I wanted that not to happen again.”

Brooks recounted that if she hadn’t skied in college, she wouldn’t have come to Alaska, wouldn’t have coached high school skiing, let alone for Alaska Pacific University, and never would have made two Olympic teams. NCAA skiing was very important to her in her journey to the Olympics, Brooks said, her relatively lackluster results as a college racer notwithstanding.

“It was a really important time for me, even though it was not my fastest time as a skier.”

“Right now, we’re just really focusing,” Rudd told FasterSkier in an in-person interview when asked about the current priorities of the nordic team. “We’re getting into a lot of intensity right now. For sure, we’re going to keep on fighting for the team, but we are really focusing on our skiing and trying to have the best year that we can possibly have, so we can really prove ourselves.”

Recounting recent events, Rudd said, “This whole last week has been quite, like, an emotional rollercoaster. But we woke up this morning, just thinking it was a regular day. We went to practice, and we could see, like, a big smile on our coach’s face, and he was like, ‘We have been saved!’ And it was one of the most exciting things that has happened.”

Rudd said that it had been “amazing” to see 5,000 people sign a petition and stand up for college skiing in Alaska. “I come from Minnesota,” Rudd said, “where it’s a pretty big ski community, but Alaska – the ski community is just phenomenal. It’s been just so good to hear everyone’s responses and support. It feels good to have someone behind us.”

Charlie Renfro, a lifelong Alaskan and former UAA skier, helped to organize the #savealaskaskiing movement and provide an avenue for that support. He was unapologetic about doing all this work even when college skiing – even in Alaska – typically suffers from a low profile within the American ski community.

“I think it’s just really important to this community to have skiing be really visible,” Renfro told FasterSkier in person. “We’re a winter city, Fairbanks is a winter city, we believe in skiing. I think as long as there’s snow on the ground here, and as long as people are recreating outside, I think skiing needs to be represented at the university.”

Renfro was optimistic about the next steps for this cause.

“I think just figuring out how to harness this momentum that we’ve got going [will be the next challenge],” Renfro said, “and to be able to really get this group of people that’s supporting skiing to be able to reach out and fund the cause monetarily. And we’re not totally sure how we’re going to do it yet, but we’re just really happy that we’ve been able to unify, and hopefully moving forward we’ll be able to mobilize monetarily like we have for this.”

Horton sounded similar notes, in an in-person interview before the rally, when asked what happens next year.

“That is a 50-million dollar question,” Horton said, referring to the total amount cut from UAA’s budget this year alone.

“I think today’s success was very exciting for the community, yes, but I told everyone it should be a scaled success,” Horton said. “Meaning, we know cuts are going to be inevitable in the future. But what this has done is it’s galvanized very disparate communities of skiers all into one group. So I think, going into the future, we’re going to have a unified group of people able to make corrections in our spending, so that we can actually afford skiing the way we should.”

Horton also addressed the question he had occasionally received over the past few weeks – why did someone who didn’t even ski for UAA care about this program?

Horton’s answer was instantly relatable to any nordic skier who has ever pored over a USSA points list or sought out an event with a more favorable race penalty: “I’m very thankful, because I would have never made the national team [without UAA], because I utilized UAA’s points base,” Horton said. “Meaning like, without their rankings, I would not have been able to go to the Lower 48 and actually have a chance. So there are several races I know that were key, where I could ski fast enough against UAA guys that, by the time I got to the Lower 48, my rankings were there.”

From a less utilitarian perspective, Horton also addressed the importance of visible role models. “As a younger kid even,” Horton continued, “you look up to these, like, really fit ex-World Cuppers that are at UAA, and that was pretty cool. And to go further with that even, if UAA goes away, I feel for the younger base of athletes. They won’t have that base I did. And you can’t replace it. If you rebuild a program, it takes years.”

Horton’s views on the role of college skiing in developing American athletes were readily applicable to either nordic or alpine skiing. “I always told people this analogy,” Horton recounted: “For every one college athlete, you have 200 juniors. Just how the funnel works, how the pipeline works. So it’s like a pyramid, you know. You got your World Cuppers, your U.S. Ski Teamers, and your college skiers at the top. So every one of those you lose, you lose that junior base.”

In the rally itself, Adam Verrier, a local longtime volunteer assistant coach for the UAA nordic team, closed by acknowledging future budget cuts and the need for secure funding moving forward. “This isn’t over,” Verrier said.

The rally’s final speaker, Tlisa Northcutt, the development director for UAA Athletics, was glad to share the link to the Annual Fund to support UAA sports. The comparable site for UAF Athletics is here.

Soon after Northcutt finished speaking, the rally dispersed. Junior skiers from local training group Alaska Winter Stars flocked to the waffle truck. Happy Skiwolves danced in front of the stage. The next morning, they would wake up and go to training. 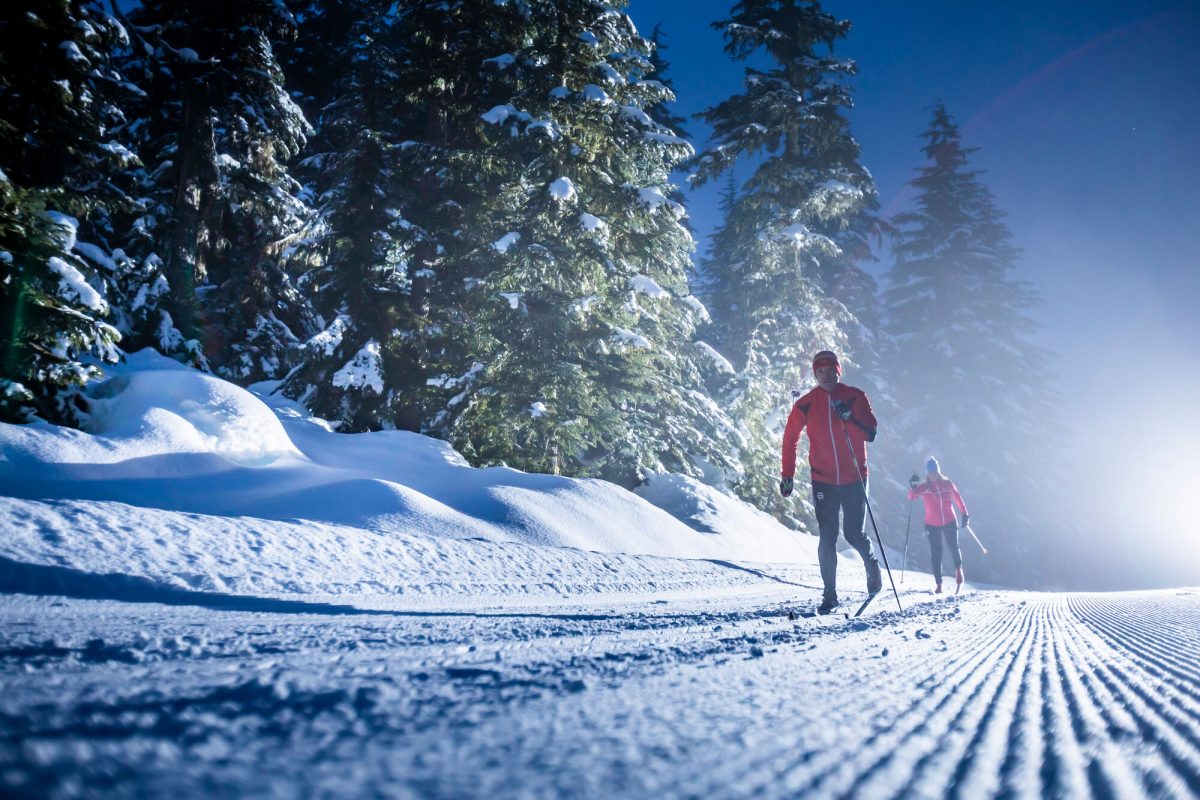