Tucked deep into snowy valleys, the tiny iconic Colorado mountain towns of Aspen and Crested Butte are separated by a mere 40 miles by foot, but roughly 200 miles by car in the winter. Separating the two is the expanse of the rugged Elk Mountain range, which features six of Colorado’s 14’ers, peaks that reach above 14,000’.

Now meccas of outdoor recreation, the two towns were historically established as profitable coal and silver mining sites, following the forced removal of the native Ute residents in the late 1800’s. In those days, communication between towns during the winter relied on the fortitude and alpine savvy of mail carriers, who skied back and forth between towns through burly terrain across a notoriously unstable snowpack.

In 1998, this historic route was revived as a backcountry ski race called the “Grand Traverse”, which begins at the base of the Mt. Crested Butte ski resort and travels north over two 12,000-plus foot passes, with roughly 8,000 feet of elevation gain spread over the roughly 40 mile route. The inaugural winners (athletes must race in pairs), racing on metal edged cross country skis, were Aspen’s Travis Moore and Pierre Wille, local legends, and accomplished cross country skiers and alpinists. Moore, who taught at Aspen High School for more than 20 years and continues to coach the cross country ski program, eventually became the coach of a young Aspen resident, Simi Hamilton.

For many living in the Roaring Fork or Gunnison river valleys, the Grand Traverse (GT) is a storied annual pilgrimage, respected for the unique and burly nature of the route and its local lore as a rite of passage for endurance enthusiasts. Adding to the mystique, the race begins at midnight, allowing racers to cross the highest avalanche risk sections while snow is presumably frozen, firm, and at its most stable. The avalanche safety arsenal of beacon, shovel, and probe are part of a long list of items athletes must carry for safety, along with extra layers, an emergency shelter, and other items that reflect how deep into the backcountry the route leads and what it might take to survive a night out in the elements should something go awry.

With the rapid advancements in ski mountaineering technology, few still commit to cross country skis for the GT – SkiMo race skis with AT bindings or lightweight backcountry or telemark gear are more stable and typically handle better descending off the passes. But this year, the team of “Yeah, but we can skate” showed skinny skis aren’t yet an antiquated option for success at the GT, particularly if you’ve got the skills of two Olympians who have continued to foster their love for mountain adventures on boards less than 43 mm underfoot.

The duo was Simi Hamilton and Ben Koons, who lined up on Fischer skate skis. After a fast start skating out of Crested Butte, the team leapfrogged with eventual winners and top SkiMo athletes Cam Smith and John Gaston, who eventually broke away as conditions favored wider skis and metal edges. Smith and Gaston made it to Aspen in 6:13:15.4, just over 36 minutes ahead of Hamilton and Koons. (Results here) 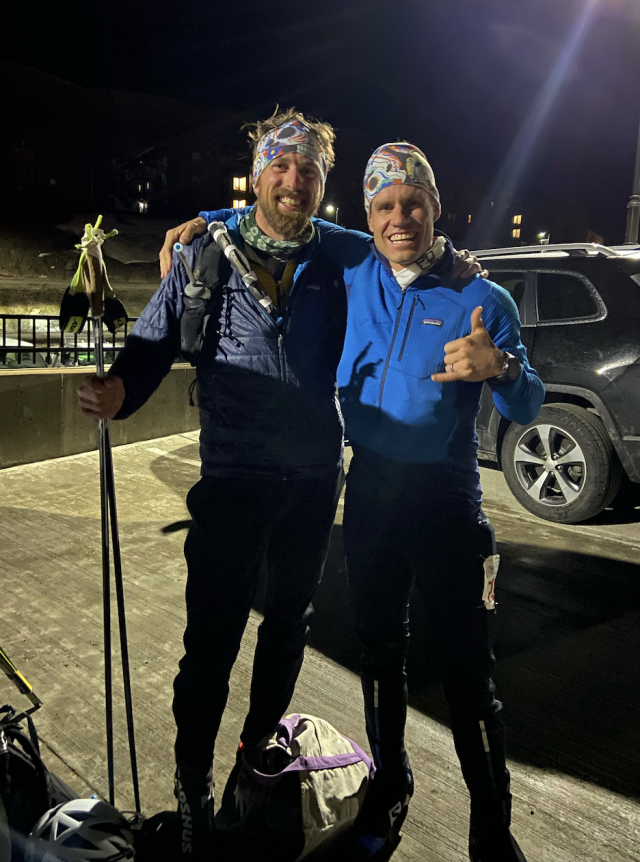 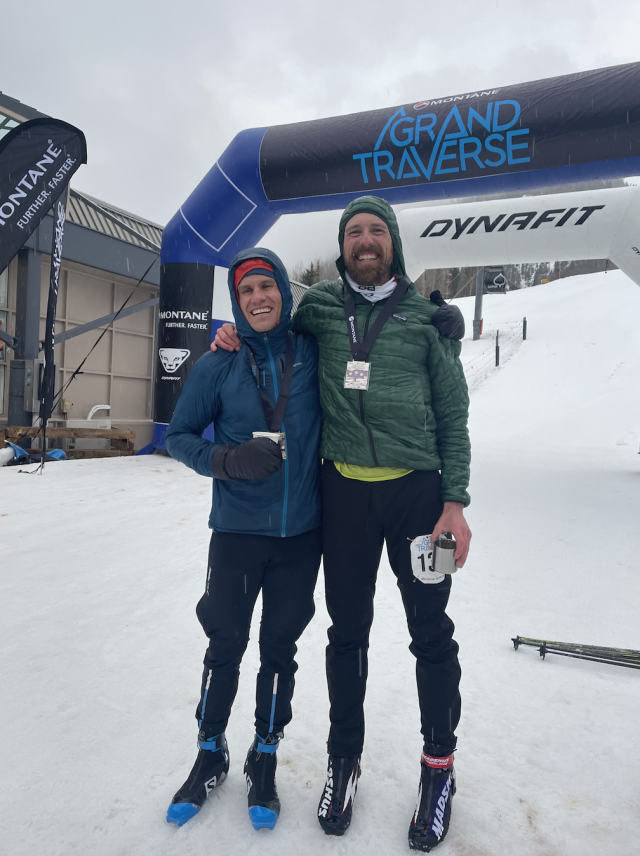 Before and after: still smiling. (Photos: Sophie Caldwell Hamilton)

Though Hamilton won the GT running race in early September, 2021, it was his first crack at the storied winter event. For Koons, it was his sixth crack at chasing the ideal crust cruising conditions that might allow a strong skater with some backcountry experience under their belt to smash the course record and take the win on skinny skis. The two have shared a number of big adventure days in the mountains on ski, foot, and bike, often with a third friend, Linden Mallory, who grew up in Aspen with Hamilton and raced on the Dartmouth ski team with Koons, and later became one of his GT partners.

While last year boasted perhaps the most ideal conditions, with athletes racing on firm and stable snow under a full moon in mild temperatures with minimal wind, this year, mother nature had a few twists up her sleeve. The week leading into the race saw a little bit of everything springtime in the mountains has to offer: warm sunny days, heavy wet snow, rain, wind, and plenty of freeze-thaw cycles. Consequently, this was shown in the snowpack, leaving Hamilton and Koons with far less skateable conditions, lots of breakable crust, some “spicy” downhills. Nevertheless, with only one broken pole, they were still smiling at the finish, and seemingly aren’t ready to accept defeat just yet.

For more with Hamilton and Koons, you can head to the Grand Traverse Instagram account, where the duo was interviewed pre and post-race, along with a video capture of their finish, in the rain, at the base of Aspen Mountain. For those interested in testing their mettle in next year’s Grand Traverse ski, registration opens at midnight on December 1st and spots fill very quickly. For those looking to explore the route in the summer, there is also a Grand Traverse run and bike race happening Labor Day Weekend. The events are among the primary fundraisers for the Crested Butte Nordic Center.

Letters to My Younger Self: Murray Banks on Embracing Opportunity and Living Life to the Fullest