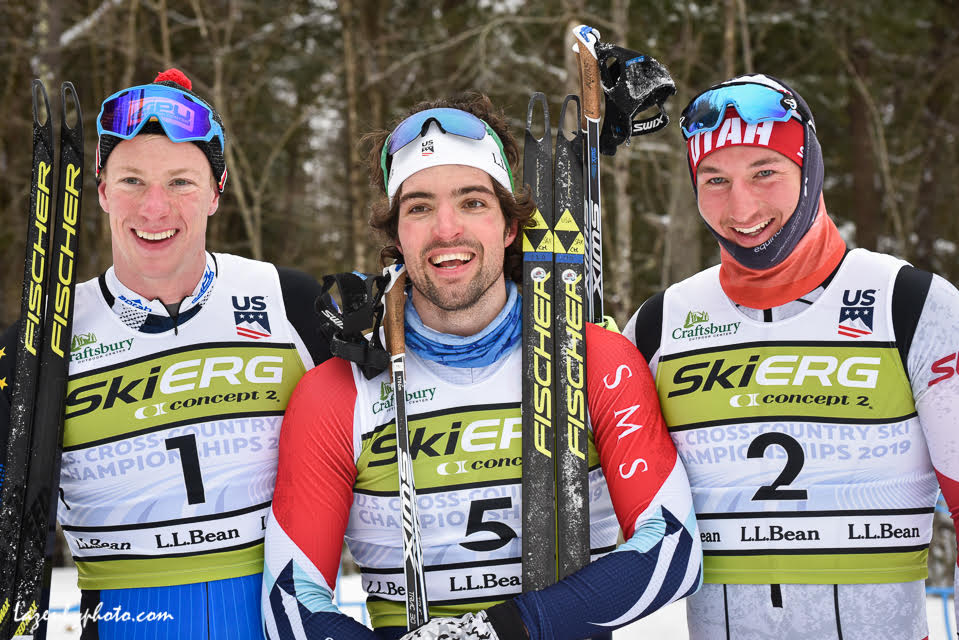 “I just love going fast. There are few things that can match the primal joy that comes from racing as fast as possible and beating someone. I definitely don’t always beat people, but that feeling is worth chasing again and again.”

That quote comes from a younger, twenty-one-year-old Ben Saxton, when FasterSkier reached out to the SMS T2 skier after being named to his first World Juniors team.

Saxton is now twenty-five, and still races for SMS T2. And he still skis fast.

Prior to the 2019 U.S. Cross-Country Ski Nationals, Saxton’s resume included two second place national sprint podiums in 2014 and 2015 and a third place in 2018.

Saxton left Craftsbury on Tuesday with two sprint national titles. He won the classic sprint last Thursday and today he won the men’s 1.5 k freestyle skate sprint in a time of 2:58.1 minutes in the final.

“It was my goal to be last out of the stadium every time,” Saxton told FasterSkier in Craftsbury about his strategy moving towards the finals. “I didn’t see a whole lot of return on doing work before the low point of the course. But coming up from the rear I was just trying to wait until people let their concentration lapse for a bit and slip a place here and a place there and I got really lucky. But that is sprint racing. I found my way to the front right before we came out onto the lower soccer field.”

His path to the final and ultimately the win began when he qualified in fifth behind the day’s fastest qualifier Logan Hanneman (APU). Saxton won the third quarterfinal to advance to the semis. In the first semi-final, Hanneman took Saxton by 0.14 seconds as they both moved onto the finals. 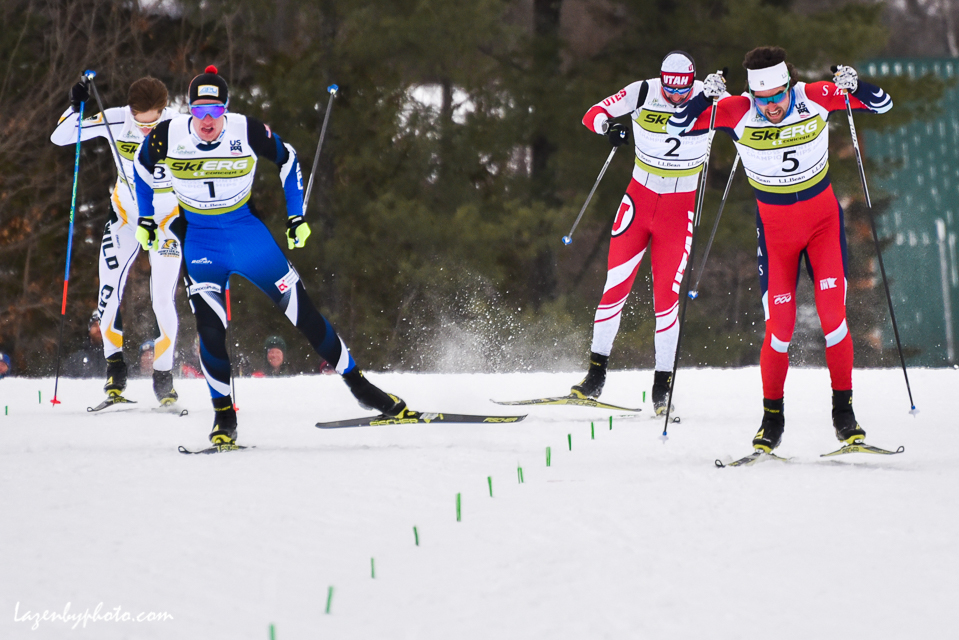 In Bib 5, Ben Saxton, and in bib 1 Logan Hanneman sprint into the the final stretch of the men’s skate sprint final at U.S. nationals at Craftsbury, VT. (Photo: John Lazenby)

It the finals, the flip-flop occurred: Saxton outpaced Hanneman to the line by 0.32 seconds. Noel Keeffe skiing for the University of Utah placed third, 1.15 seconds back. Rounding out places fourth through sixth in the men’s final were Daniel Streinz (NMU) who lost out on a lunge with Keeffe, then Gus Schumacher (AWS), and Zak Ketterson (NMU) respectively.

“The final was really interesting,” Saxton said. “It was kind of a mix of, I hesitate say, old, older skiers and younger skiers. And Logan and I have to count ourselves amongst the old people now. It was kind of interesting running from all those young guns. We did our best to stay in front at least for the time being.”

For Hanneman, it was his second podium at nationals, as he placed second to Saxton in the classic sprint as well.

“The course rewards waiting if you have the acceleration up this last hill,” Hanneman summarized as he spoke with FasterSkier after the men’s final.

Like Saxton, the experienced Hanneman played the waiting game, allowing other skiers to do the work on the first half of the course. Ultimately, Saxton and Hanneman made a move that gave them a slight gap as they pushed toward the finish.

However, about the same moment Hanneman accelerated up the final hill, Schumacher stumbled and fell.

“I was close to Gus and he went down hard as I was accelerating into the final hill,” Hanneman said. “It made a little change of plans. But Saxton had an awesome move up this last hill and I could not quite close it.”

Keeffe, at nineteen years old, is a freshman at Utah. Today’s result is his best career national’s performance. His best placing prior to Tuesday’s podium was a 15th in the classic sprint at the 2018 U.S. nationals. Keeffe will be headed to Lahti, Finland for World Juniors after his performances in Craftsbury. He was the third qualifier in Tuesday’s skate sprint, and the eighth fastest qualifier in the classic sprint where he placed 13th overall.

“I was fighting for position up the last hill and Ben Saxton and Logan Hanneman had a little bit more than I did and they got away,” Keeffe said. “It was a lunge at the finish for me and Daniel Streinz, it was pretty close. Didn’t know I had it for awhile but it was fun.”