Picking up where we left off in Östersund, Sweden: a pursuit start 15-kilometer classic. Unlike the women’s field where Therese Johaug “administered a beatdown”, creating a large time gap for herself, the margins for the men were much smaller.

A glance at the start list shows yesterday’s winner and Tour leader Sjur Røthe of Norway starting only two seconds ahead of his teammate, Simen Hegstad Krüger, and 17 seconds ahead of Finn Hågen Krogh and Martin Johnsrud Sundby.

This year’s Tour de Ski winner Alexander Bolshunov of Russia, whose winning streak was interrupted, would start with a 22 second time deficit in fifth. Tenth place Ivan Yakimushkin (RUS) was 33 seconds back and Jens Burman (SWE) in 20th just inside a minute. 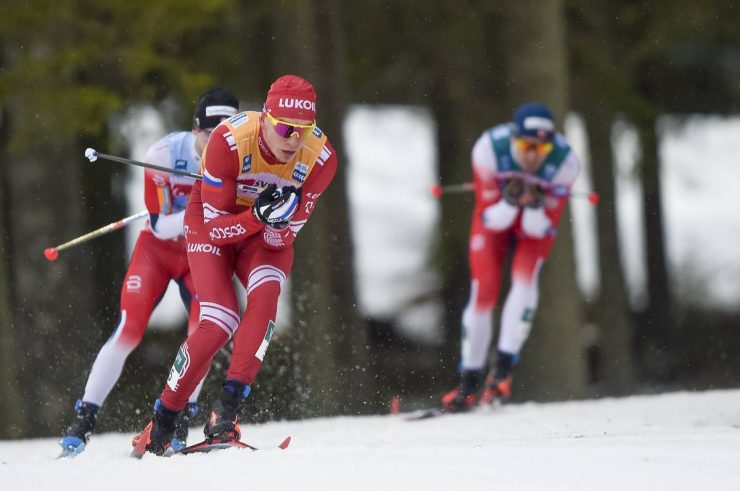 With four 3.75 k laps to cover, the deficits were manageable. Perhaps the only Tour victory hopeful who was kept up about the work that needed to be done was Johannes Høsflot Klæbo, who would start 1:23 behind the leader after finishing 31st the day before.

The caveat would be to stay upright while navigating the icy winding bends of the primarily man made track. With grey skies and above-freezing conditions, it was fast and dicey, made evident by numerous crashes.

During one particularly noteworthy four-person pileup, Kamil Bury of Poland was taken out by Italy’s Maicol Rastelli as the two navigated a treacherous right hand turn at the bottom of a steep descent. Though neither had full control, Rastelli slid off the left side of the course, taking Bury along with him. Bury lost a ski and became tangled in the netting. 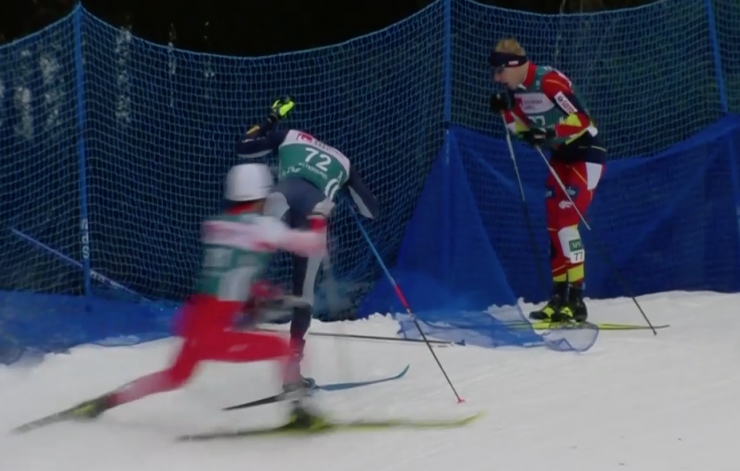 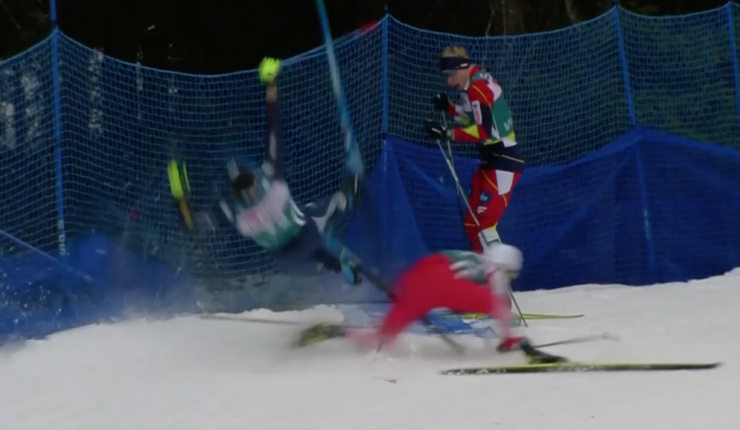 As Rastelli stood up and worked to right his skis, which were pointing in opposing directions, a third skier, Lin Bao of China, essentially slide tackled Rastelli, sending him in a complete backflip back down to the snow.

A fourth skier, Tadevos Poghosyan of Armenia, also lost control and slid into the pile. Bao and Poghosyan were able to stand up relatively quickly and continue on their way, but cameras cut away before the resolution of whether Bury found his ski and Rastelli was able to recover from his forced aerials.

Holy carnage… back to the race.

At the end of the first lap, it was as if the men were gifted ready-made groups. Røthe and Krüger matched stride for stride and double pole for double pole, while the remainder of the top five plus a handful of additional Norwegians, namely Pål Golberg, Hans Christer Holund, and Martin Løwstrøm Nyenget, chased from roughly six seconds back. 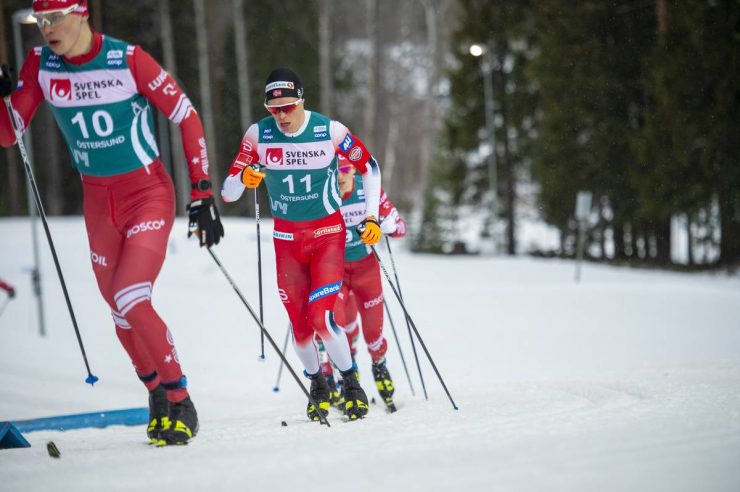 In bib 11, Martin Løwstrøm Nyenget (NOR) works his way towards the sharp end of the men’s 15 k classic pursuit. (Photo: NordicFocus)

It looked as though Røthe and Krüger might run away from the field, but it was not so easy. By 4.4 k, the gap was closed and an eight-man train chugged along the tracks. As Yakimushkin had fallen off the pace, it became seven Norwegians and Bolshunov.

Over the final two laps, the front pack whittled down from eight to five, where it remained with one k to go. Holund, Golberg, Røthe, Bolshunov, and Nyenget. The Russian in the yellow bib was primed to make a move.

Bending, rolling, and swooping, they headed for the stadium. Up the final punchy climb, Golberg and Bolshunov were side by side, and Golberg started to slip. He recovered and powered out of the climb, running with Klæbo-like dominance over the crest of the hill and into a tuck to lead into the stadium.

Bolshunov had fast skis and caught a draft before whipping into second place as the men entered the final straight. The Russian was right behind Golberg and absolutely charging. But there was not enough real estate. He changed lanes to challenge the Norwegian and looked as though he would overtake him, but the final meters evaporated and Golberg threw his foot for a clear win. 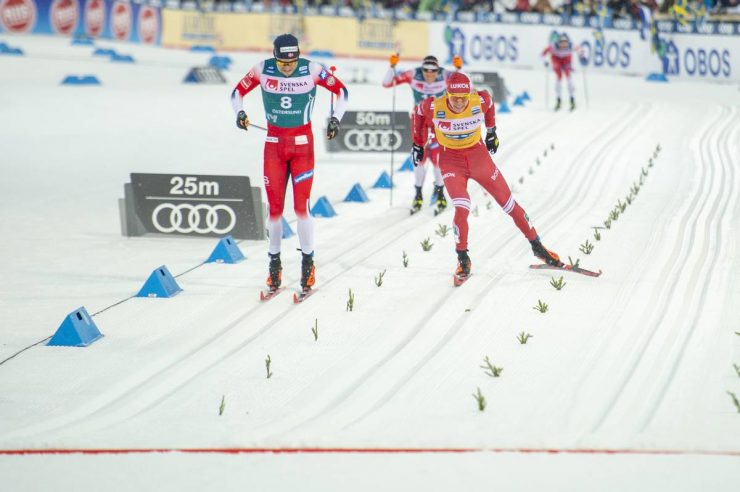 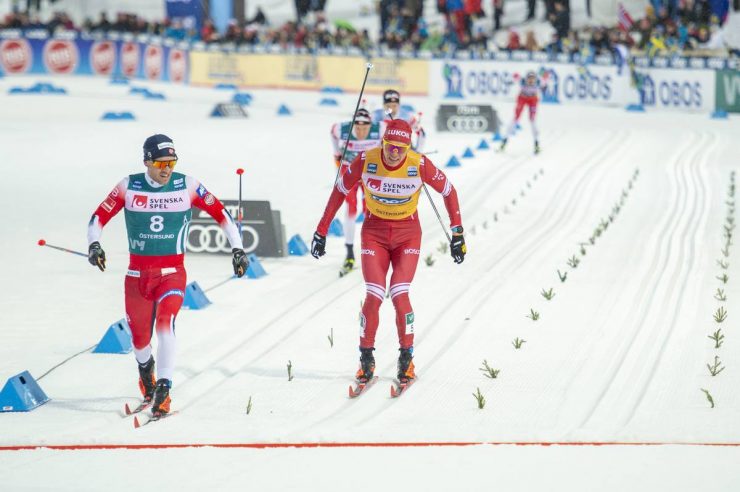 Pål Golberg about to toe – during the 15 k classic pursuit, Stage 2 of th Ski Tour 2020 in Östersund, Sweden. (Photo: NordicFocus) 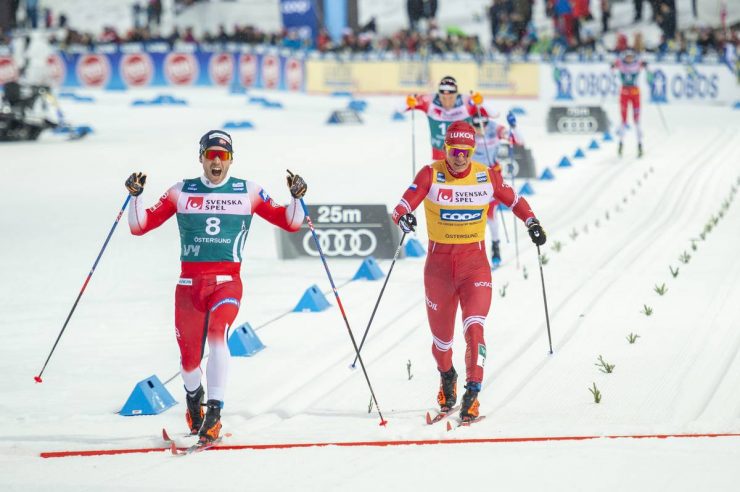 “Perfect klister conditions,” Golberg told FIS at the finish. “I managed to get the ski pair from last weekend, so I had good skis this weekend as well. It was a really, really good day.”

The interviewer noted that conditions were much different than the previous day.

“It was hard in the middle,” Golberg explained. “It was a bit drier, so a bit difficult with klister in the downhill. But the tracks were perfect, so I’m really happy.” 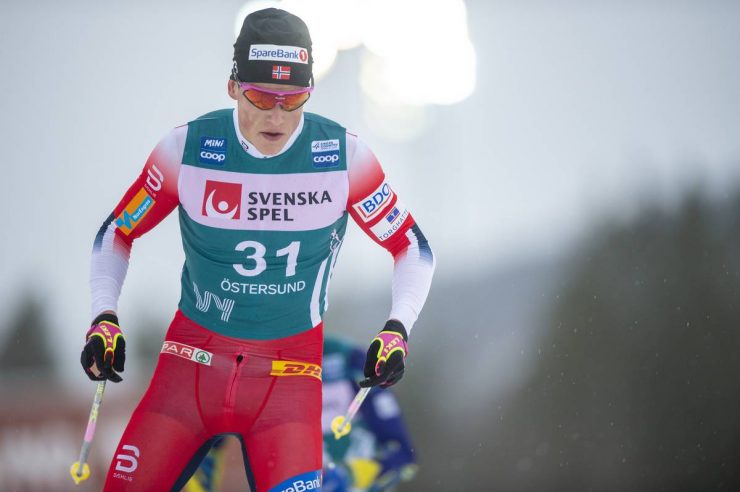 Not the start of the FIS Ski Tour 2020 desired by Johannes Høsflot Klæbo. (Photo: NordicFocus)

Speaking of Klæbo, the Norwegian skied his way into 25th, but ceded an additional 52 seconds in the overall standings by finishing 2:15 back on the leaders.

FIS sent out a news brief shortly after the race with information regarding Klæbo’s injured finger. Here is the statement in full:

“Johannes Høsflot Klæbo (NOR) has to undergo an emergency check up for his broken finger. The check up has to take place with his doctor in Trondheim (NOR). As the rules of the FIS Ski Tour 2020 state no other transportation of athletes than by train, the jury gave permission to Johannes to travel by car to Trondheim and back to Åre for this special case. After the consultation, the jury will receive a report of the treating medical team in Trondheim.” 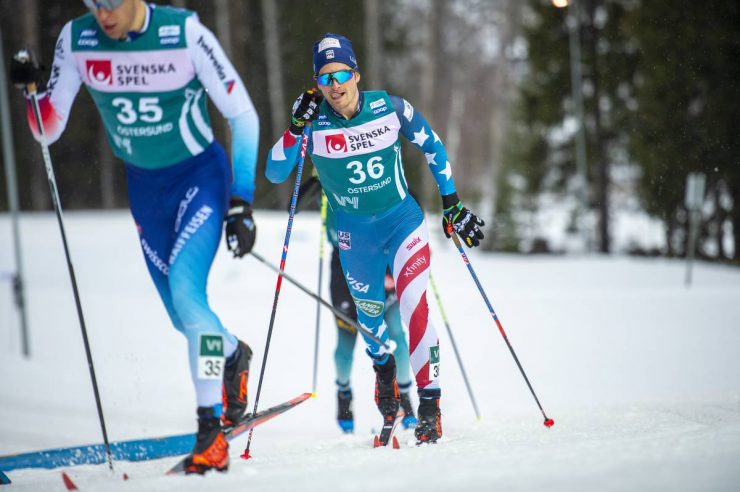 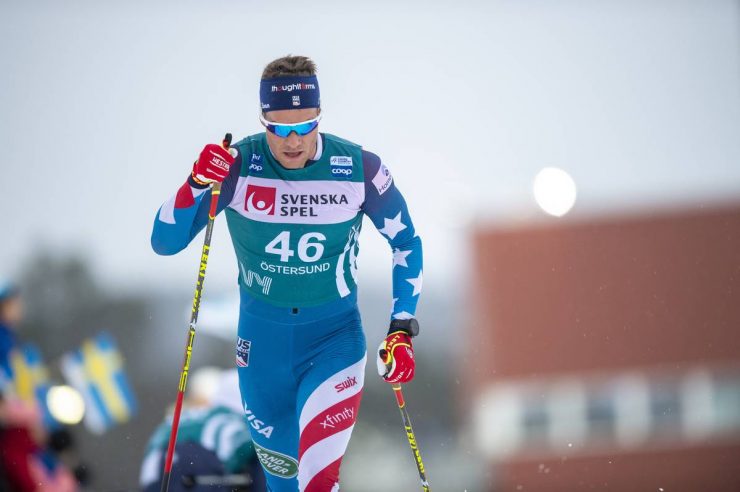 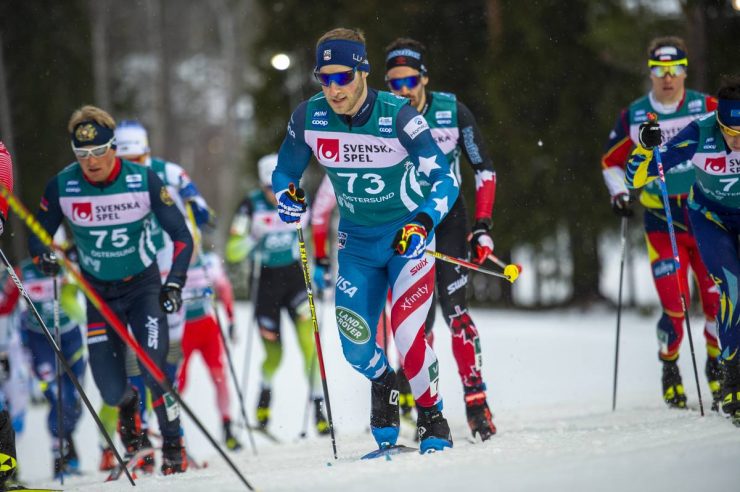 Ben Lustgarten in the mix during the classic pursuit in Östersund, Sweden. (Photo: NordicFocus)

Tomorrow is a rest day on the Ski Tour 2020, Stage 3, a skate sprint, will be held on Tuesday. 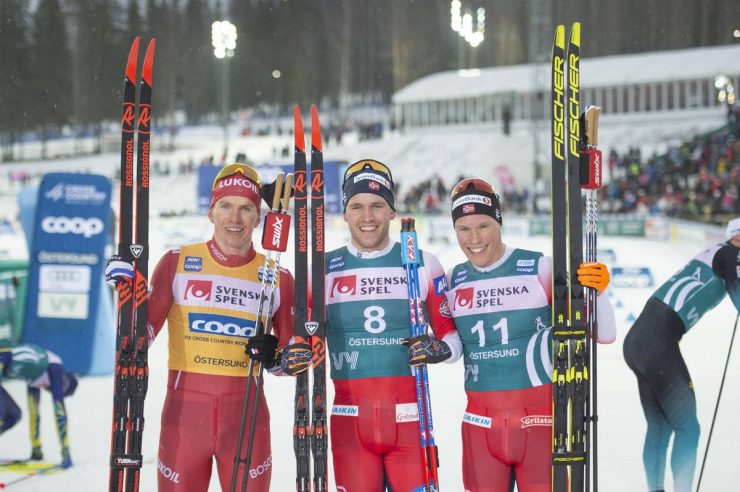