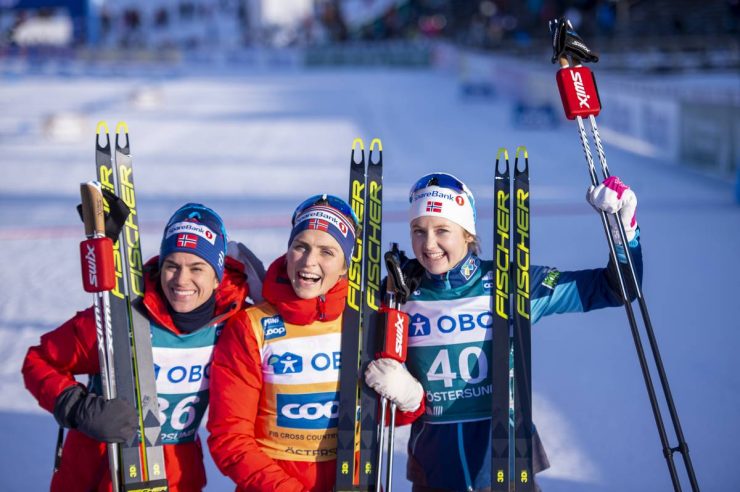 Under clear skies, light fading and shadows lengthening as the sunset looms just a few hours away, the women time trialed through the tall conifers to set the tone of the overall tour standings. Crowds arrived in droves to line the course and fill the stadium, a cacophony of cheers creating the soundtrack to the stage.

Today’s format suits the Tour favorite, Therese Johaug, who has expressed that mass start events do not suit her as well. This season, Johaug won the Tour de Ski and has taken the top spot in each of the last ten individual start distance skate events. 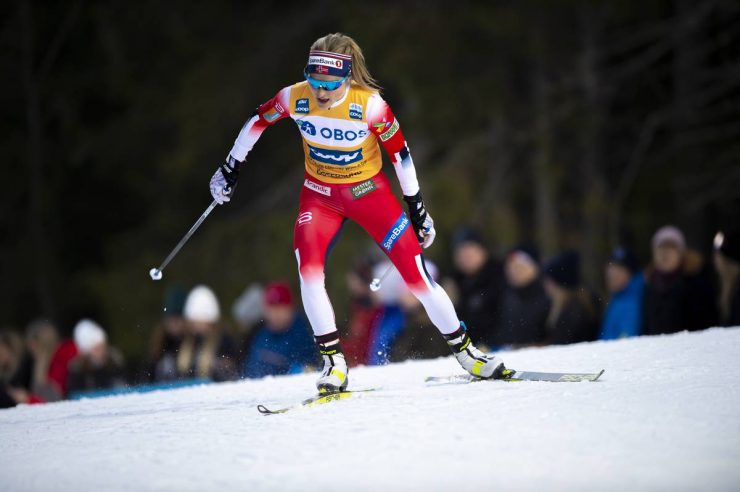 Johaug hammered out of the start gate and did not slow down until she crossed the line, her grimacing face making clear the unmatchable power and tempo she was forcing herself to maintain. Stopping the clock at 21:49.7 and raising her arms briefly in the air before collapsing over her poles, Johaug sealed the deal on best in show.

Her time gap on her competitors increased in an almost alarmingly linear fashion throughout the stage. 12.8 seconds at 2.6 k increased to 20 at the halfway mark, growing to 45.6 seconds at the finish. 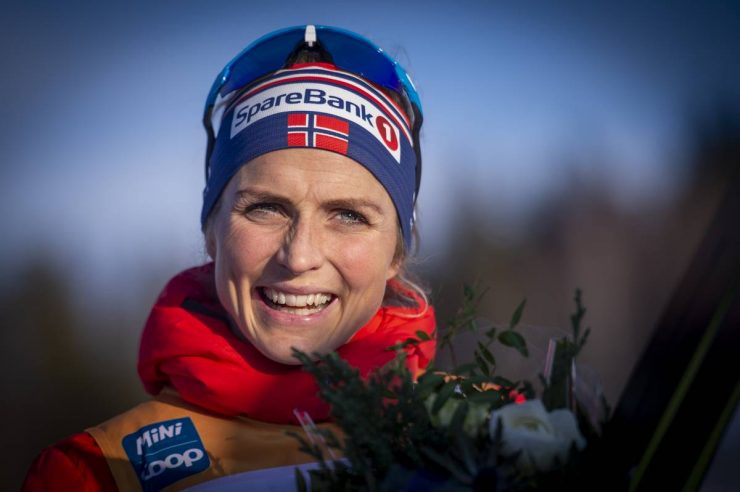 Victorious in Östersund, Therese Johaug has a strong start to the FIS Ski Tour 2020. (Photo: NordicFocus)

“Oh yes, I could never get a better start than this,” a glowing Johaug told FIS at the finish. “I feel that it was my best skating distance in my career, so I am really happy with the skis and with the shape. It was an amazing race today… It’s good to start the Tour and I’m looking forward to the next races.”

Here’s what else went down.

Racing in bib 27 amongst the first wave of 30 skiers, Rosie Brennan set the bar high for the seeded group of  top-ranked skiers who followed in bibs 32 – 60, posting some of the fastest time through each checkpoint. Although she faded into the results as the seeded group came through, it was still a noteworthy performance, placing her 9th for the day (+1:25.7) and second American. 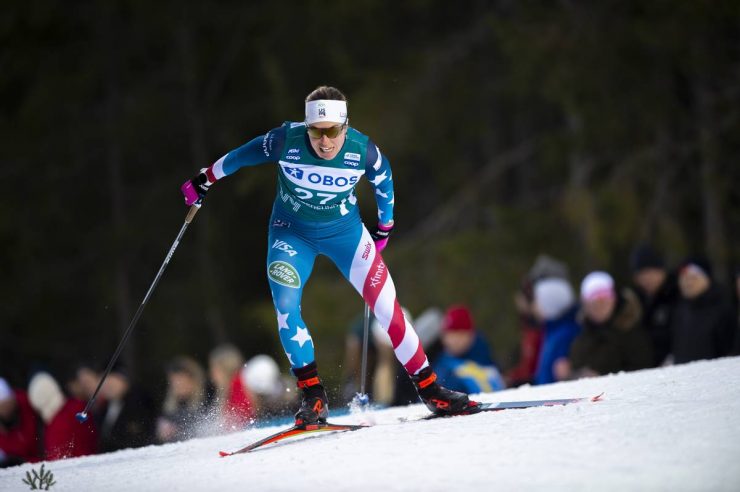 Rosie Brennan sets the bar, racing to 9th in the first stage of the FIS Ski Tour 2020. (Photo: NordicFocus)

Of other skiers in her group, Brennan was only challenged by Norway’s Ragnhild Haga and Sweden’s Frida Karlsson, who was recently cleared to return to World Cup competition. Karlsson sat out the majority of the season after failing to meet team health standards for body composition and bone density.

Karlsson took the pace out hot, clearly gunning for the win, or at least for the bonus points available at the 2.6k checkpoint. She had the second fastest overall time there, then she attacked the steady climb with high tempo. But she was unable to hold the effort, fading back into the ranks as the race went on. She ended her day in 19th (+1:46.0). 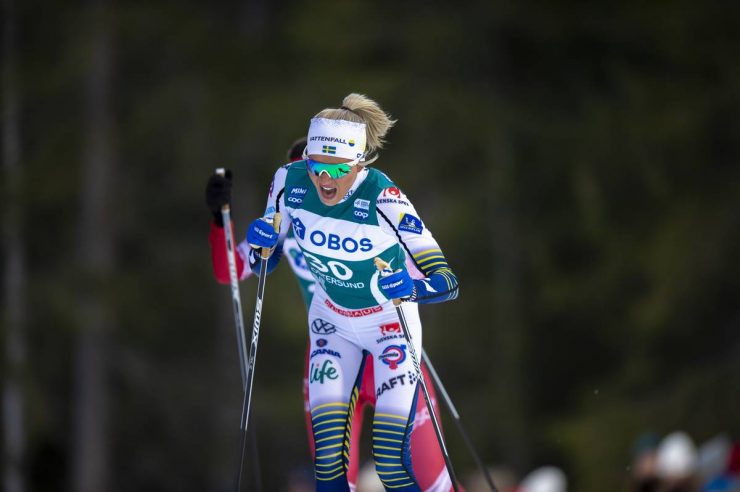 After a fast start, Frida Karlsson falls to 19th in the 10 k skate. (Photo: NordicFocus)

Among the first starters of the seeded group in bib 36, Heidi Weng (NOR) went hunting. From 4.2 k onward, she knocked down the previous best time, setting a new and short-lived time to beat, as Johaug chased from two bibs behind. Weng, the 2017 and 2018 Tour de Ski winner who is currently ranked third in the overall World Cup standings hung on to take the second podium spot.

Next over the line was Ingvild Flugstad Østberg in third (+47.3), who hovered a few seconds behind Weng at each checkpoint. The trio sealed the deal on an all-Norwegian podium. 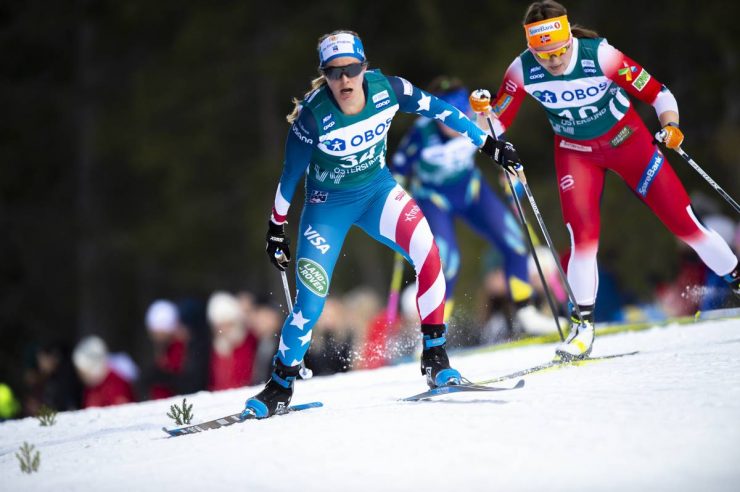 Jessie Diggins skates to 8th in the first stage of the FIS Ski Tour 2020. (Photo: NordicFocus)

In a post-race call, Diggins described the track in Östersund as a “thinking course”, full of swooping turns that kept athletes focused and on their toes. Diggins explained that she has been experiencing an abnormal amount of fatigue over the last few weeks, but felt some encouraging sensations in today’s event and has a plan in place to optimize her recovery between stages so she can keep going hard.

She also shares insight about some of Tour’s sustainability initiatives to decrease the environmental impact of such an event, and weighs in on the energy generated from a large American team. 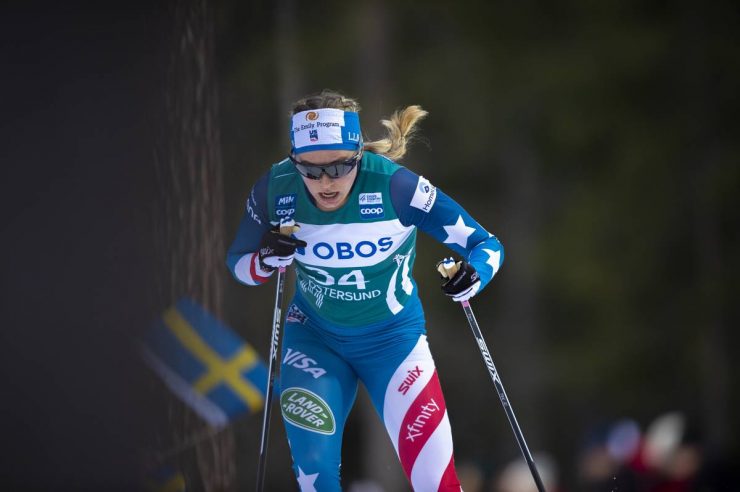 Jessie Diggins leads the way for Team USA after the first stage of the FIS Ski Tour 2020. (Photo: NordicFocus)

Just behind Diggins, Brennan was the next American. It was the APU/USST athlete’s third top-10 result of the season. Her last two were also earned in stage events; she was 9th in the 10 k skate during the third stage of the Tour de Ski in Toblach, Italy and 6th in the 10 k classic in Ruka. She also skied the 7th fastest time of day up the Alpe Cermis in the final TdS stage.

“It was a good opening day of the Ski Tour 2020 for me,” Brennan wrote in an email to several news outlets. “After a frustrating weekend last week, I was ready to try to turn things around. The course here is hard and has lots of climbing so I felt it suited my strengths. It was fast conditions but there was also little rest so it was a tricky pacing game. I didn’t perfectly pace it and lost a little in the closing kilometers but I had much improved race feelings so I am very satisfied and hope I can continue this way throughout the tour.” 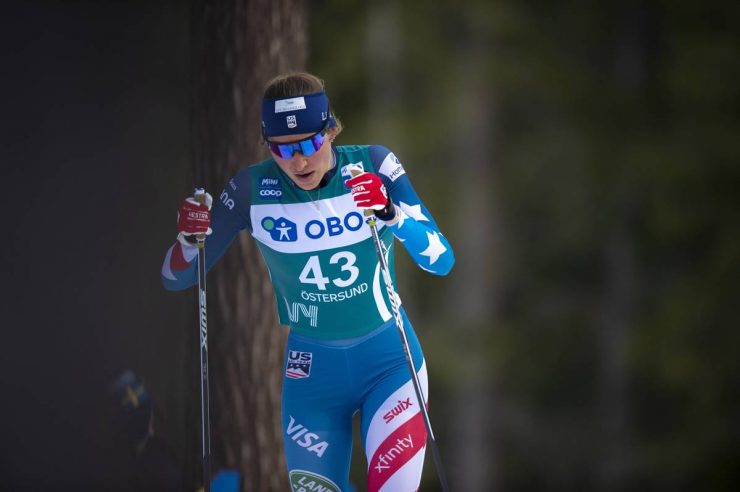 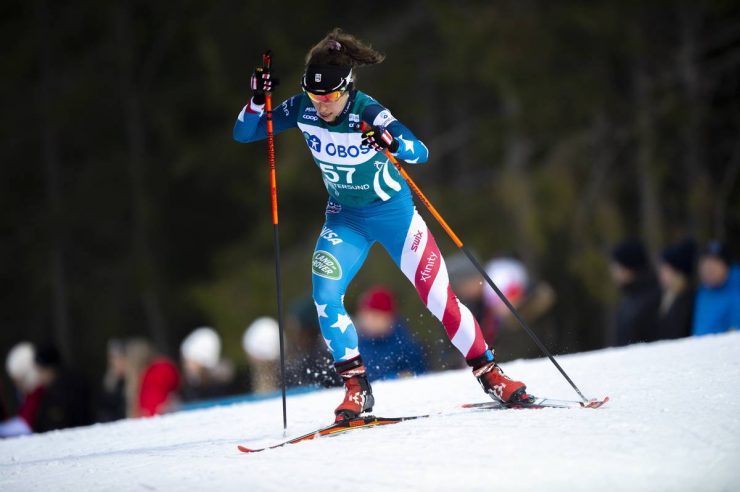 Back on the World Cup, Rosie Frankowski races the first stage of the FIS Ski Tour 2020. (Photo: NordicFocus)

In a post-race call, Matt Whitcomb sheds light on how the team is approaching the Tour in comparison to the Tour de Ski or a ski tour at the end of the season. Whitcomb explains that a major focus leading into the week was recovery and mental preparation.

“We didn’t focus to much on performance — that’s never a great way to go. We work on the process and getting people psyched by giving them the confidence to know that they’re recovered. Whether or not they’re sharp on the first day or two, they should be sharp by the end. Whether that ends up happening or not, we’ll see. But believing in it is the key.”

Whitcomb explains further how he gages how tired or recovered his athletes are and provides further insight into the women’s performance. Lastly, Whitcomb comments on Swirbul’s noteworthy rise in the ranks this year, attributing it to her fun but focused mental approach and the effect of the strong APU women’s training group.

On the Canadian side, Emily Nishikawa was the top finisher just outside the FIS points in 32nd (+2:05.0). She started one bib ahead of Sweden’s Charlotte Kalla, who she marked and followed to the finish once caught. 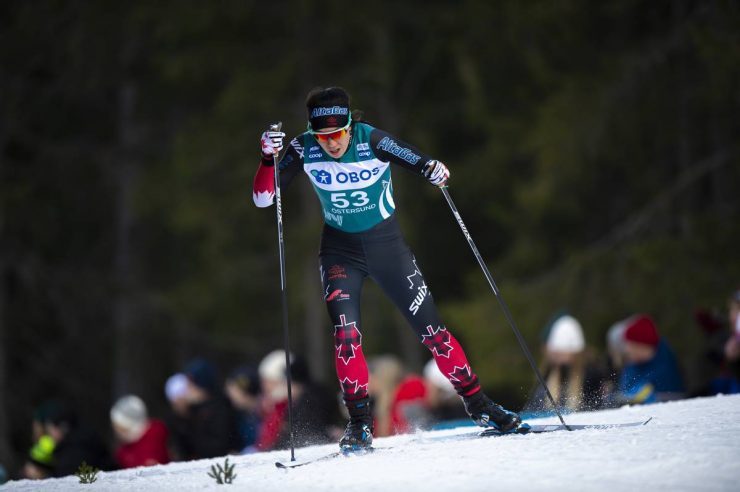 The tour is young. Racing continues tomorrow with a 10 k pursuit start classic on the tracks in Östersund.