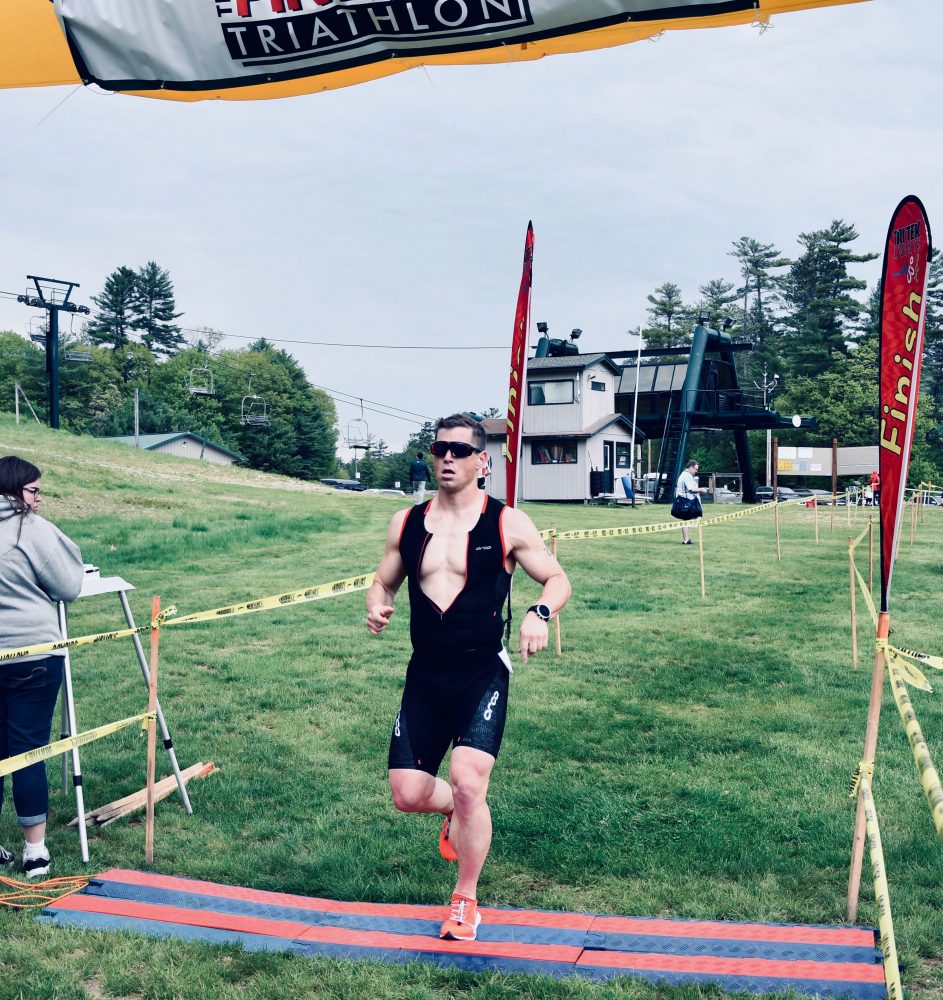 Kris Freeman manages Diabetes. He did this on the World Cup for years and at four Olympics. He remains a competitor and continues to test himself since retiring from elite level skiing in 2018.

“Retired” for Freeman means remaining fit and jumping into the odd cross-country ski race: he placed third this year in the National Championship 15-kilometer classic race in Craftsbury, Vermont.

Freeman has turned his attention and his considerable capacities to triathlons.

We were interested to know how Freeman had been approaching the sport and managing his Type 1 Diabetes in route to his first Ironman distance triathlon in Lake Placid, N.Y. on July 28. That effort will entail a 2.4 mile open water swim, a 112 mile bike, capped with a 26.2 mile run.

The Lake Placid Ironman is Freeman’s primary goal for the season. To prime for that event, Freeman raced an Olympic distance tri on June 1, and has registered for a half Ironman on June 22.

“I can take a lot of what I learned skiing and apply it to other sports,” said Freeman in a call in late May. “The issue with triathlon though are the shortest events I do are the longest events that I did in skiing.”

The king race on the men’s World Cup is the 50k. A roughly two-hour race pushing the limits of an athlete’s aerobic capacity. An Olympic tri for Freeman clocks near 2:15 hours, the half-Ironman between 4 and 4.5 hours and the full in Lake Placid could go a bit over 9 hours.  Freeman has used a Dexcom continuous glucose monitoring system in conjunction with an insulin pump since 2010. The pump injects Freeman with a small dose of insulin every five minutes 24-7. For racing, he pre-programs his doses depending on how high or low he expects his blood sugar levels to be at certain points during the race.

He brings sugar, or glucose, into his system by feeding. The insulin, coming from his pump, draws the glucose out of the blood and into the muscles.

On the World Cup, a few variables kept Freeman from consistently nailing down the moving target of insulin dosing and how to pre-program his pump for a particular race.

“Feeding was always stressful for me on the World Cup,” recalled Freeman. “We had limited staff a lot of the time. So we wouldn’t necessarily have an experienced feeder out there. The guys did the best they could, and a lot of the times we would, but sometimes, we have a volunteer doctor out there who had never fed before in a feed zone and I’m not finishing the race unless I get that bottle. And you come through in a pack of 30 or 40 guys and it is pretty crazy. I definitely had some stress a lot of stress about feeding on the World Cup.”

Distance events were Freeman’s specialty. But the insulin dosage for a 15 k and a 30 k would differ drastically.

“In a 15 k race, I am pretty much all out the whole way,” said Freeman. “I am anaerobic with lactates over 10mm/mol on every uphill and just gasping for air on the backside. Whereas on the 30 k you just cannot sustain that type of output for that long.”

The anaerobic work during harder efforts, Freeman explained, pushes his blood sugar levels up — glucose is a byproduct of lactate.

When programming insulin dosing for shorter races, like a 15 k, Freeman would have to factor in his expected increased lactate load.

“In the shorter races it was always more difficult to find that happy medium of how much insulin to take to cover my anaerobic workload without taking too much and crashing through the floor and going low in a race,” he said.

Freeman explained that in the 30 k and 50 k races his lactate levels were moderated and he would burn primarily glucose for fuel which he could replenish with a timely feed. And his lower levels of lactate would not drive up his blood sugar levels.

In the half and full Ironman distances, Freeman said he expects to be in an anaerobic state for a short period of time. The insulin dosing, he thinks, should be easier to determine. And the feeds in triathlon are simpler than in cross-country skiing. He can consume sugar in the form a sports drink during the swim-bike transition, and take continuous sips while on the bike, and as needed during the run.

According to Freeman, the longer the triathlon event, the lower his insulin dosage.

Freeman’s glucose monitor provides important audible feedback if his blood sugar trends in a too high or too low direction. A certain alarm chimes at the low or 100 mg/dl mark, and another at the 180 mg/dl mark.

“Those are my chosen levels, because if I am below 100 I am not that far from an area, below 70 is going to negatively impact my performance from a low standpoint,” said Freeman. “Below 70 for a non-diabetic, you are bonking. And you are headed to a bad place. So that is just a warning like ‘ok I am below 100 I need to get some glucose on here so I do not go any lower. On the 180 side, if the chime went off, it is programmed to continue to chime every five minutes until it is no longer about 180. So I would listen for 15 minutes, ‘did I hear the chime again?’ Ok I did, I am going to hold off feeding. And if I really got concerned about my level, I could take the device out and look at it, because I am going to be on that bike for five hours so I could take a look if I needed to.”

On the bike, for example, if Freeman hears the 180 level chime, he can cease taking on glucose until his workload “burned enough glucose and made me insulin sensitive enough that my levels just came down,” he said.

Prior to his Olympic distance tri on June 1, Freeman’s only other recent triathlon experience was last year’s Sea to Summit race that finishes atop New Hampshire’s Mount Washington. Freeman won that event in 5:41:37 hours despite what he said was some flawed insulin dosing.

“I learned a lot because I had never done a race longer than a 50 k up until that point,” Freeman said. “And so then I am racing six hours and I actually took too much insulin. I took less insulin than I had ever taken in a 50 k and it was still too much.”

Remember, the insulin pulls glucose from his system. During the Sea to Summit, his insulin levels removed too much glucose out of his blood despite what he believed to be a steady intake of sugar. (And he wasn’t producing lactate that would be converted into glucose.)

In that race, he refueled on the bike, and then made an unplanned stop a half mile from the summit finish to consume what he called an “emergency flask” of UnTapped maple syrup.

“I just drained like five ounces because I was dropping really quickly, and that got me to the top,” he said. “It was a good day. But definitely learned some lessons about how little insulin you need when you are at that aerobic glycogen burning state.” 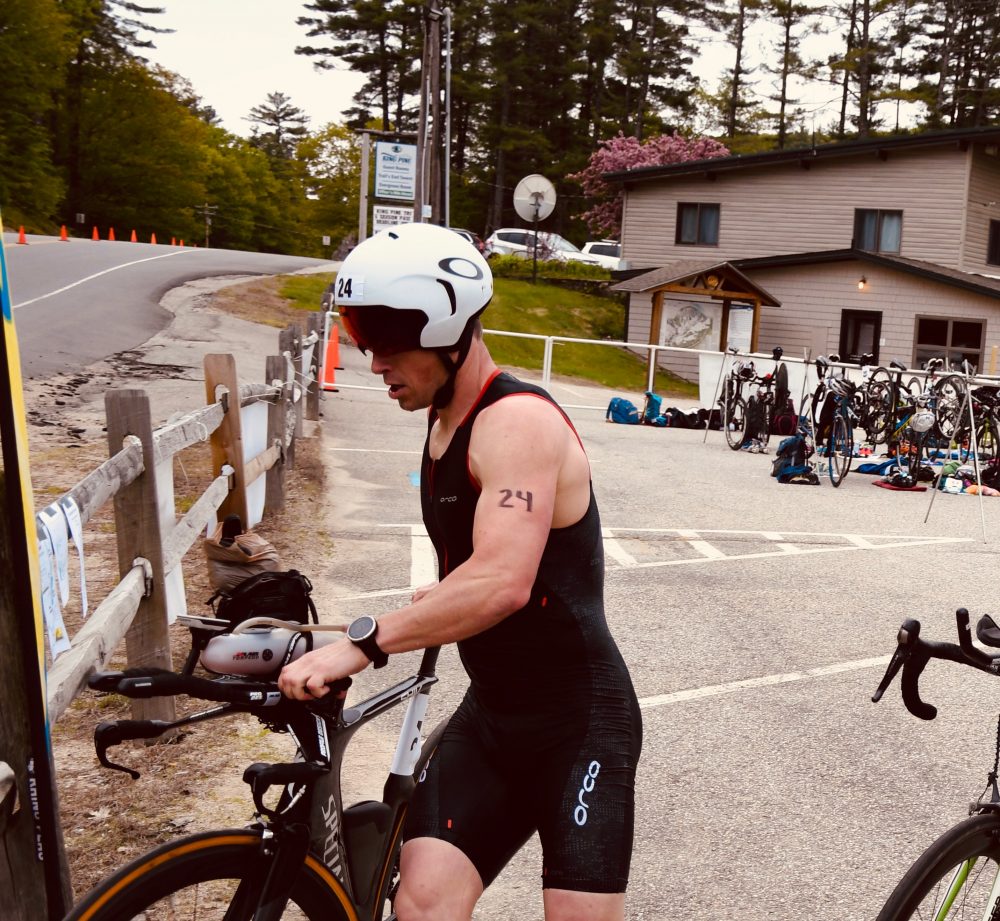 Adding to the physiological puzzle, Freeman said riding the bike is lactate intensive. Again, that has the effect of driving up his blood sugar levels, so he might need to refuel on the bike less than he originally thought.

Freeman began the race with a glucose reading of just over 180 mg/dl. He finished around the 150-160 range.

“It was actually about a perfect blood sugar profile as I could hope to have for a race,” Freeman said in a post-race call. “And it is interesting because it was a two hour and 24 minute race which would be kind of like a 50 k ski race. And I used a more aggressive dose in the triathlon than I would have in a ski race. I fed about half what I would have in a 50k. And I think that the reason for that is that I am pushing such a high lactate when I am riding my bike, the lactate drives the sugar upwards. Also, when I am ski racing too, the downhills you truly do nothing when you are in a race. Which allows your body to catch up. In a relatively flat bike race, I am pedaling 99.8 percent of the time.”

With a 33 mile bike portion on June 1, and a 56 mile bike for the half marathon, Freemen suspects he’ll not be pushing into the anaerobic zone as much in the later race. For now, his plan is to run half the dose of insulin for the half-marathon distance. A race approximately twice as long in total elapsed time than his recent Olympic distance performance. 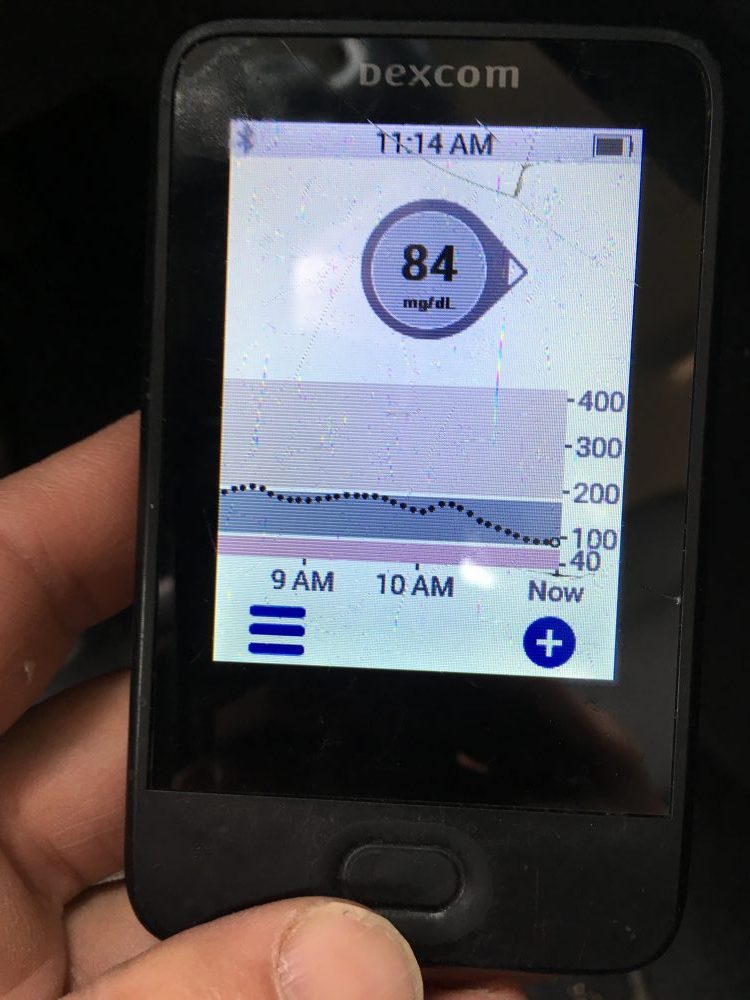 Kris Freeman’s blood glucose levels for the duration of his King Pine triathlon. The race began at approximately 8:15A and lasted 2:24:27 hours.  (Photo: courtesy of Kris Freeman)

Lessons learned and applied. Freeman stated he needs to dial in his swimming (admittedly it is his least strong leg) and his swim to bike transition. Yet, his insulin dosing and feeding strategies passed the first triathlon racing test of the season. He placed second overall in the King Pine Olympic distance tri.

We’ll be following Freeman this summer to hear more about his build-up to his first Ironman in late July and learn more about what he learns when it comes to diabetes management and his high standard of performance.