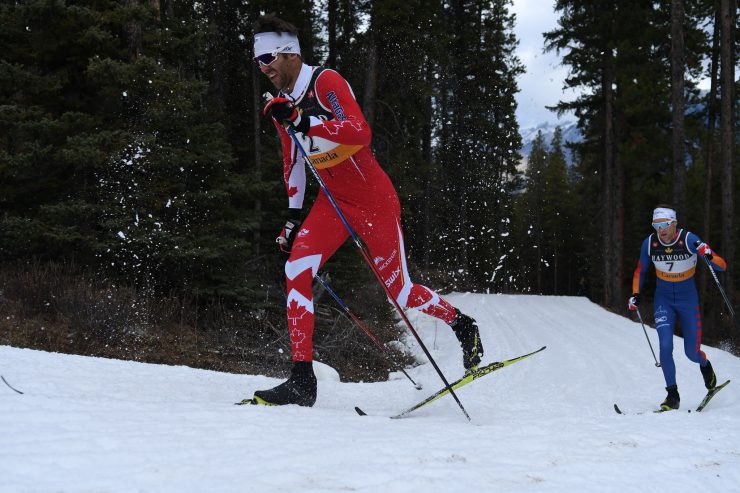 The North American season kicked off today with classic sprints at Frozen Thunder in Canmore, Alberta. Most of the top athletes were treating this as a chance to do some race intensity and were more focused on training and process goals than on actual results.

The day’s results are summarized in the rundown.

Chief of Competition Thomas Holland had expected a smaller turnout this year, partly from fewer people traveling to Frozen Thunder in a non-Olympic year and partly because the event is not used for trip selection this year. In years past, Frozen Thunder races have been used to fill Canada’s remaining World Cup period 1 starts. While there were less elite athletes present, the overall entries rose to 159, with a large increase in juniors.

“There’s a lot of happy athletes putting in a lot of time here, and it’s great to see the energy,” Holland said in a phone interview while waiting for doping control to finish. “The numbers are up, there’s more women this year.” 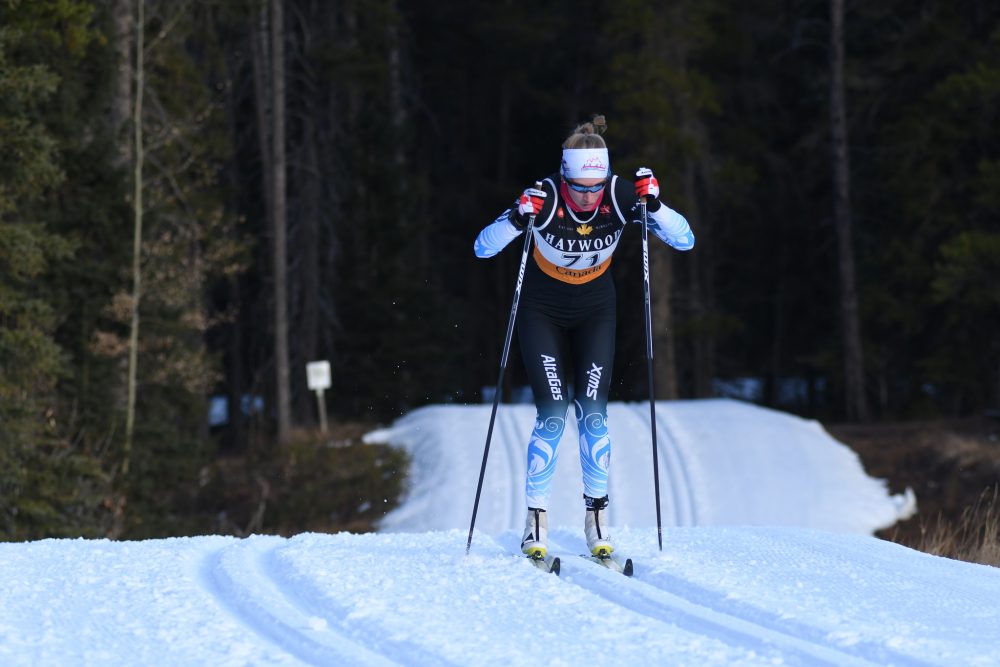 The King’s court heat format has been a good fit for the early season racing. It ensures every skier gets to ski three heats against people of similar speed.

This year’s course is new, adding a hill and switching to a single lap of about 1.5km.

Below are quotes from athletes to provide insight into North America’s first day of head-to-head racing.

Athletes on Tactics and Race Goals

“I was happy with my race today. I executed my technical goals well and was able to maintain my speed around the entire course without slowing down much which has been something I’ve been working on this summer.” — Dahria Beatty (CNST, Q 1st, H 1st)

“Once I got the ‘king heat’ I felt for sure like the underdog being a first-year senior man. So, my goal was just to stay in there as much as possible and hopefully beat at least one guy to stay in the king heat for the A final. It was a super fast group of guys today so I was pretty excited to be racing in the final.” — Reed Godfrey (Team R.A.D., Q 6th, H 4th)

“My plan for the heats was to press hard from the gun in every round. My focus today was on doing a good effort at full race pace. At this time of year, I’d prefer to get the hard racing in my legs rather than racing tactically for the win.” — Julien Locke (CNST, Q 2, H 5)

“Unfortunately, my klister caught 2/3 of the way through the semifinal and I face planted into the snow while the other guys skied around me. I pushed hard in the B-Final, leading from start to finish. The snow softened and made for a far more challenging loop. I was happy to have good power through the last round and also to see my fellow BC NST teammate Gareth [Williams] skiing well and holding on to a good pace.” — Locke

“I was really happy with the whole day. I found I executed my plan like I wanted too and that I skied the course well both in the qualifier and during the heats. I will have to work on my pacing for qualifiers, I went a bit to slow up the first climb at the start. I wish I could have stayed in front of Lenny in the last 100m, but I did not have enough gas. Never count this guy out ;)” — Dominique Moncion-Groulx (Team R.A.D., Q 3rd, H 2nd)

Athletes on Feeling Fit. Or Not.

“My shape was surprising considering I only started full-time training less than a month ago. Double pole felt stronger than I remember and the legs felt good on the climbs. I’ll attribute my podium performance to the SkiGo klister I was using.”  — Andy Shields (Lappe, Q 9th, H 3rd) Shields is the Canadian rep for SkiGo waxes.

“I didn’t have high expectations today coming off an altitude block in Mammoth, but I ended up being super happy with how the day went. It’s obvious that the race shape isn’t there yet, but it was really fun battling it out with with some very solid skiers today!” — Reed Godfrey

“Today’s races were pretty smooth, didn’t expect much since I just returned from the NST camp in Mammoth, California. I felt alright in the qualifier and managed to move up to 6th on the day.” — Gareth Williams (CNST, Q 8th, H 6th)

“I was super happy to have a good qualifier [which] shows good fitness but I tried double poling and haven’t done enough on snow yet to hold my fitness through the heats.” — Russell Kennedy (Team R.A.D., Q 1st, H 7th)

“The race today was tough, I just got on snow and coming off a volume camp in Mammoth lakes the body wasn’t too happy trying to push to the max. It was solid intensity, but hopefully not where the race shape will be. “ — Evan Palmer-Charrette (Team R.A.D., Q 11th, H 8th)

Athletes on the King’s Court Format 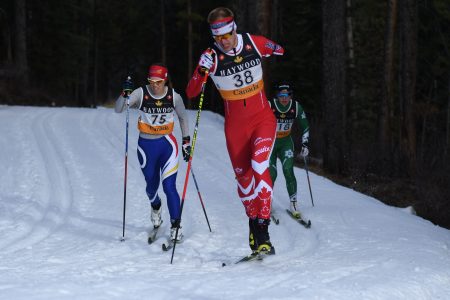 “The King’s court format was changed slightly this year with only the winners of the heats moving up. The 2nd and 3rd skiers stayed where they were and 4th place dropped down. With the new format it meant you couldn’t cruse into 2nd place and advance like you use to – you had to get after those ‘Ws’ which was a great improvement on the part of the organizers. It made for a lot more high-stakes lunges at the line.” — Shields

“Kings court format is a great training tool because it puts you against people who were a similar speed to you in qualifying allowing people to be in the mix for most of the heat versus the big spread you see in a normal quarter-final. I think it’s perfect for early season prep races like Frozen Thunder and as a development tool, giving everyone the opportunity to race four times.” — Beatty

“King’s courts is nice because it allows everyone to race a full set of heats, which is a really good training benefit this time of year. It’s also nice to have everyone fighting to move up and up in the heats throughout the day.” — Reed Godfrey

“Kings court is a great format to help people improve their race fitness in the early season and work on tactics in a low pressure situation.” — Palmer-Charette

“The King’s Court format allows everyone in the ski community the opportunity to race multiple times. The format allows for you to race skiers of similar speed, as well as challenging yourself as you progress through the rounds. For me, I have an opportunity to race the Senior Women, [as] our ski speeds are very similar. That close head-to-head competition is always good to develop skills and tactics for future races.” — Mark Arendz (CPNST) 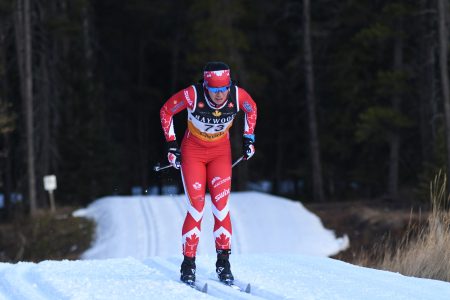 “It has been really great to get back on snow for training and racing this past week. Having on snow races early season is super valuable and is a great way to figure out what needs to be fine tuned before the season starts.” — Beatty

“It’s important to break that barrier of racing now early in the season to learn what you need to work on moving forward to when it really starts to really count. The quicker we can make that pavement to snow transition definitely helps going into the the races in late November and December.” — Reed Godfrey

“I leave for the World Cup in 10 days and it’s time to start ramping up the on-snow speed. No better way to do that than a good race! Frozen Thunder is such an asset for us here in Canmore. It’s a huge benefit to be back on snow before the season and it gives us an edge in our preparation for the season.” — Locke

“I think getting on snow in the early season can be really important for people looking to race fast in period one. For everyone going overseas to the World Cup I feel like it’s essential and for those of us racing domestically it elevates the level of competition for everyone.” — Palmer-Charrette

“You can’t replace hard races with intensity. If you want to go fast at some point in the season, you need to get enough race starts throughout the year.” — Arendz