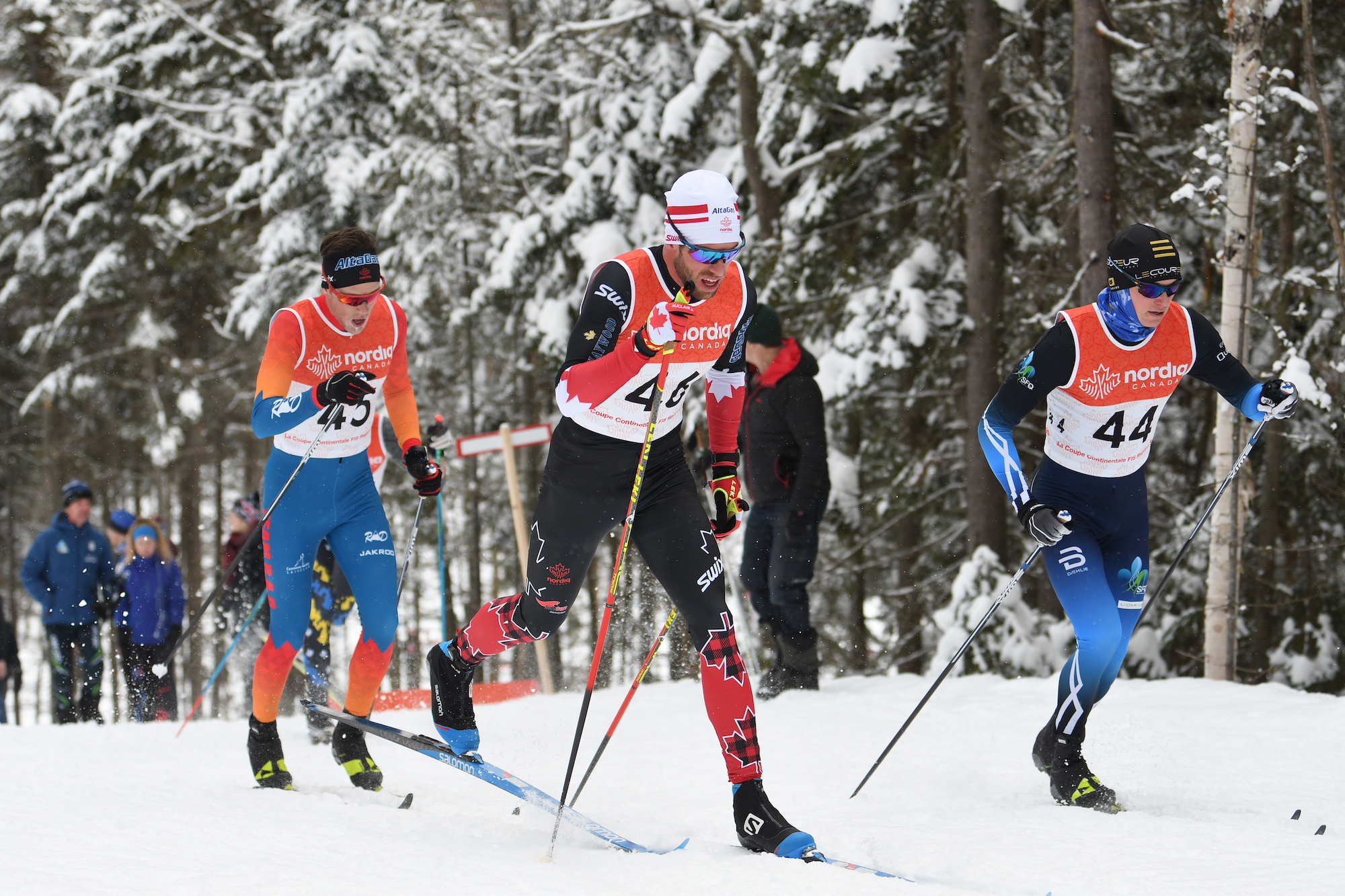 Fresh snow greeted day two of the Mont Sainte-Anne Trials for the interval start classic. With athletes battling to qualify for U20/U23 World Championships in Oberwiesenthal, Germany and three separate World Cup trips (Falun/Scando Tour, Sprint Tour, Canmore), it was never going to be a simple matter of skier against the clock. 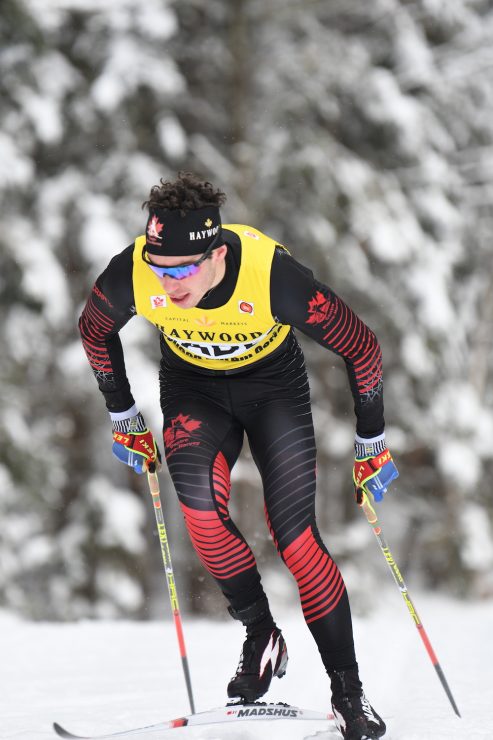 Racing started with the open men’s 15km on a 5km loop that was shared by all the elite categories. Early on, it looked like a tight four way battle, but CNEPH’s Antoine Cyr, starting last, was 14 seconds ahead after the first lap. Cyr was fastest on all three laps to win in 40:05.1, 47.5 seconds ahead of Fondeurs Laurentides’ Ricardo Izquierdo-Bernier and 51.6 ahead of Canmore’s Russell Kennedy. Cyr should be selected for U23’s based on this win. In the interview posted below, he talks about his relief to know that his form is still good after a disappointing first World Cup in Europe.

The U20 and U18 men raced 10km  and once again Black Jack’s Rémi Drolet displayed that full time students can be competitive, as he won both laps to finish in 26:46.2. CNEPH’s Olivier Léveillé took advantage of a late start bib to narrowly beat ULLR’s Xavier McKeever, finishing at 35.4 and 39.1 seconds respectively. This result combined with Thursday’s sprint should see both Léveillé and McKeever selected for U20 Worlds. 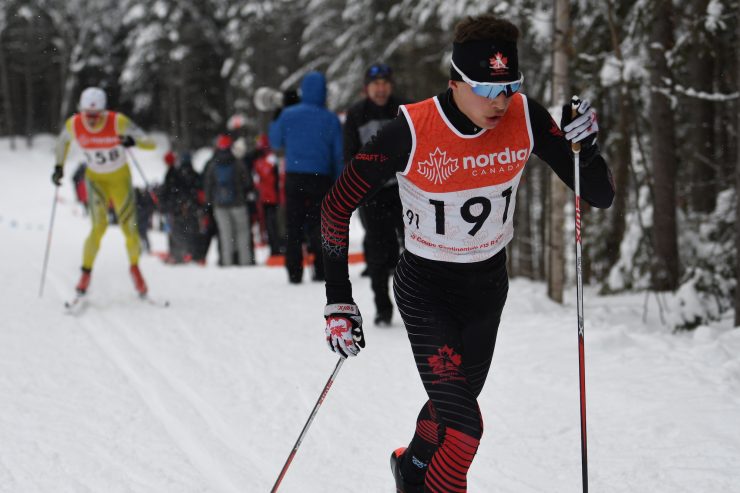 (Drolet’s post-race interview starts with the punchline to a joke, but without the setup we miss the laugh.)

In the women’s 10km, Emily Nishikawa continued the theme of winning every lap on her way to a clear victory in 29:51.2. CNEPH’s Cendrine Browne showed that her recovery is going well with a strong second place in her less-favoured technique, finishing 48.7 back. Laval University’s Andrée-Anne Théberge completed the podium, 2:04.7 back. 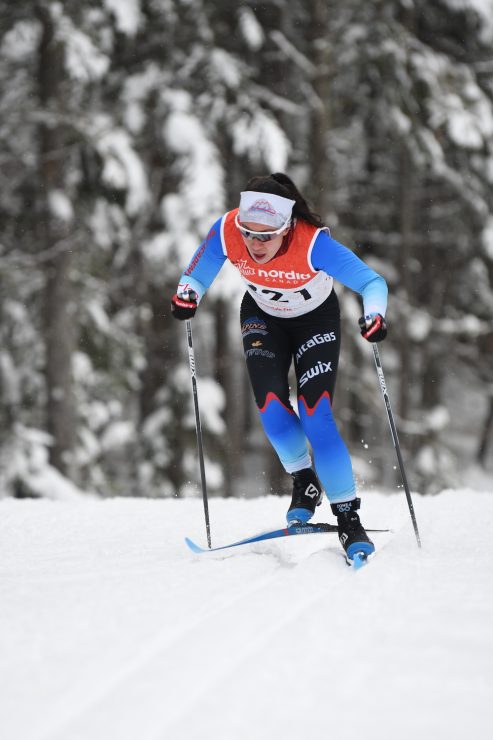 AWCA’s Annika Richardson was 4th at 2:15.4 to take the top U23 finish and what should be a selection for U23 Worlds.

By the time the U20 and U18 women headed out, the tracks were showing some wear, but that didn’t stop Black Jack’s Molly Miller from winning the 5km in 15:24.8, 10.9 seconds ahead of teammate Jasmine Drolet, and 11.0 ahead of Revelstoke’s Beth Granstrom. Revelstoke also took fourth with Alexandra Luxmoore at 11.1 seconds, only 0.2 seconds away from silver. 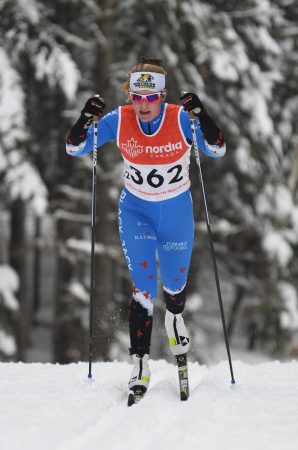 Black Jack defended their club’s reputation for developing young skiers with three U20 wins so far this weekend. Revelstoke is also starting to make waves with yesterday’s winner Elizabeth Elliott 11th today at 47.6 seconds. With 86 U20 and U18 men and 72 U20 and U18 women competing today, the future of Canadian skiing is starting to look brighter.

Sunday’s free technique mass starts should be exciting, with the U20 and Open categories merged so the younger athletes can measure themselves against the top seniors.

Photographer Doug Stephen has a new gallery for Saturday. Athletes are welcome to download and use full resolution images if they give credit to ‘Doug Stephen’ or @vr45photography.