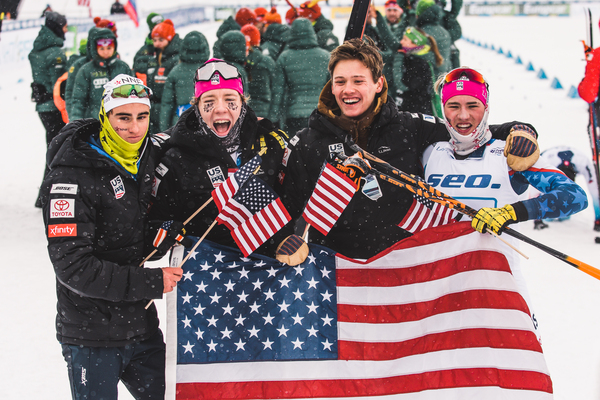 Nineteen teams were entered in the race.

In what is his skiing canvas, the 15 k freestyle, France’s thirty-two-year-old Maurice Manificat won his first World Cup of the season in Ulricehamn, Sweden today in 34:55.4 minutes. It was a tight race in that Norway’s Simen Hegstad Krüger Simen Hegstad Krüger who placed second finished 1.1 seconds back. Teammate Didrik Tønseth was third (+8.7).

In the women’s 10 k pursuit, Italy’s Dorothea Wierer won in a time of 29:20.1 after skiing two penalties (1+0+0+1). Second place went to Germany’s Laura Dahlmeier, who finished 6.0 seconds after Wierer after one missed shot (0+0+1+0). Saturday’s third place went to another Italian, Lisa Vittozzi, who finished 16.2 seconds behind the winner after tying Wierer’s shooting score.

“I’m really happy with my race today,” Egan wrote in an email. “The wind and altitude are always a challenge here, but I took my time on the range and capitalized on the fast glide of my skis to save energy on course. I made a costly and dumb mistake on my last shot but still came away with my second-best career result. I’ll take what I learned from today and go for it again tomorrow in the mass start! Can’t wait!”

Canada’s Antoine Briand (CNEPH) was the fastest qualifier on the day in 3:14.71 minutes and won the men’s final. Dominique Moncion-Groulx (Nakkertok) placed second in the final, with Ben Saxton (SMS T2) in third.

Caldwell went on to win the final in 3:37.06, with Yeaton in second and Kelsey Phinney (SMS T2) in third.