When Therese Johaug wins a sprint qualifier by 4.5 seconds and Sophie Caldwell qualifies in 23rd, you know it is not your average course. Held at the Swedish national alpine ski area in Åre, today’s event seemed to blend the infamous climb up the Alpe Cermis in the final stage of the Tour de Ski with skier cross on perhaps the shortest but toughest sprint on the World Cup.

A gradual uphill start led skiers to a fast downhill into a swooping banked turn to the left. The course then ascends a pitch as steep as 28% up the base of the alpine hill, climbing nearly 60 meters within the final 200 meters of the course. Athletes would then need to walk back down to the start area.

Though less than 700 meters in total length, nearly half the usual distance, the course took the women roughly two and a half minutes, on par with a usual sprint time.

The event drew a roaring crowd, with fans lining the course, their yells and gaps echoing as athlete’s skied by. After the race, Matt Whitcomb recognized the event organizers for putting together a unique stage and drawing so many energetic spectators.

With Johaug at the top of the qualification list were Heidi Weng (NOR), Greta Laurent (ITA), Linn Svahn (SWE), and Laura Mononen (FIN), the most diversity in nations among the top five in the tour so far. This result also added mystery and excitement as it could be anyone’s game. Weng is a top distance skier, Laurent and Svahn are most recognized for their sprint performances, and Mononen normally hovers on the border of the top-30 FIS point scorers list, a relative unknown. 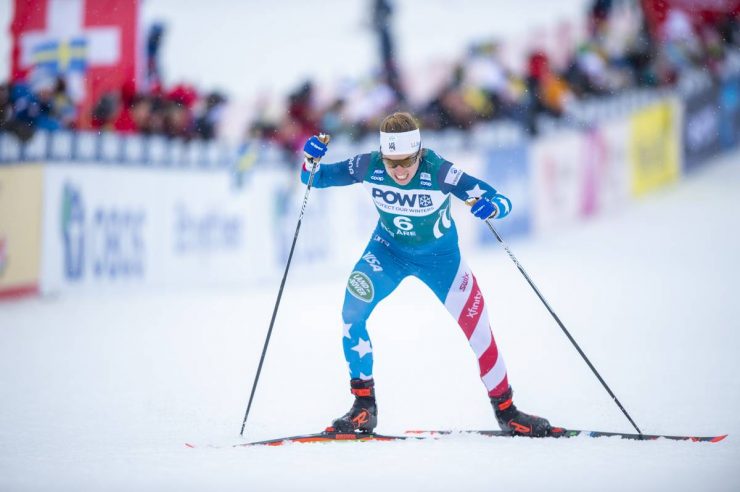 Rosie Brennan climbs to the top American result in qualification during the Stage 3 “sprint”. (Photo: NordicFocus)

Rosie Brennan was the top American qualifier in 14th, followed by Jessie Diggins in 17th, Julia Kern in 18th, Sadie Maubet Bjornsen in 21st, and Caldwell in 23rd.

Racing in the second wave of the quarterfinal, Diggins and Brennan took the pace out hot, trying to create a gap over the two top qualifiers, Johaug and Weng. Diggins led the way over the gradual climb and into the downhill, fearlessly flying into the banked turn with high speed. Riding up the berm to the outer lip of the curve, Diggins stayed in control, though only just.

Brennan and Diggins were still in the lead beginning the hill climb, but the two high-tempo Norwegians were gaining quickly. Weng and Johaug overtook the Americans midway up the climb, but Diggins did not let them get away. Maintaining contact, she crossed the line within 1.5 seconds of the Norwegians and advanced as lucky loser, her early effort to push the pace making it the fastest of the five heats. 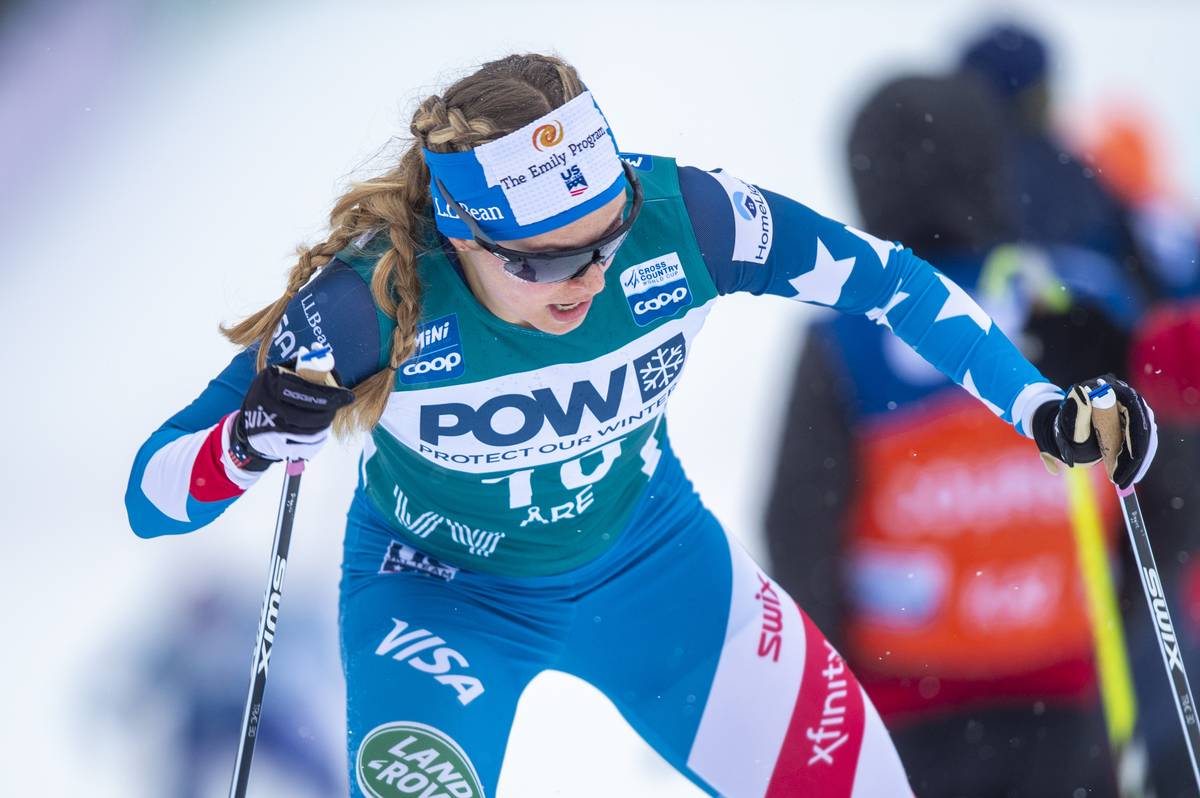 Brennan fell back to fifth in the heat and did not advance. She ended her day in 22nd.

At the start of the last quarterfinal round, Caldwell skied off the front, navigating the banked turn with ease and picking up momentum as she approached the base of the hill in V2. Caldwell stayed near the front through the climb, her technique smooth and controlled. As the course curved and leveled to the finish, it was Mononen and Caldwell at the front. They crossed the line together, immediately folding with hands on their knees in anguish.

If this is what the finish of the quarters looks like, what will happen as the deep burn of cumulative fatigue starts to sink in?

In the semis, Diggins faced off again with Johaug and Weng. Rather than flying off the front, Diggins sat in the middle of the pack over the first climb, hooking 180 degrees left and dropping into a tuck heading into the banked downhill.

Johaug was last into this turn and last to the base of the climb, but she was far from out of the race. Jump skating up the left side of the course, Johaug rocketed from the back of the pack to the lead, edging out Weng to win the round.

Diggins fell off the pack at the base of the climb and finished last in the heat, and 11th for the day.

Relaxed, smooth, collected, per usual, Caldwell rounded the banked turn in second and was in the mix at the base of the climb. Then it was over.

At the front, Svahn, Astrid Urenholdt Jacobsen (NOR), Laurent, and Mononen stepped powerfully up the climb. In the final meters, Svahn was at the front with Laurent close on her tails looking like a lock for second, until a last second surge by Jacobsen snuck her just ahead of the Italian at the line. As the heat was slower than the first, only Svahn and Jacobsen advanced.

After falling off the pack, Caldwell took last in the heat and ended the day in 12th.

Breaking down the lineup in the final, you’ve got two pure distance skiers with a history of outstanding results in the TdS hill climb, Johaug and Weng, alongside their teammate, Jacobsen, an all-arounder skewed toward distance. These three women paired with three sprinters, Svahn, Jonna Sundling (SWE), and Nadine Faehndrich (CHE). A World Cup cocktail.

The Swedes took the lead at the start of the final, shooting around the banked curve and into the climb. Johaug, again, the last to the base of the hill.

As the grade increased, Weng and Jacobsen accelerated up the right side of the course, while Johaug repeated her uphill attack as she weaved through the other women to the front. The Norwegians skied three abreast as they passed under the Audi e-tron arch toward the steepest pitch, shortly before the finish. 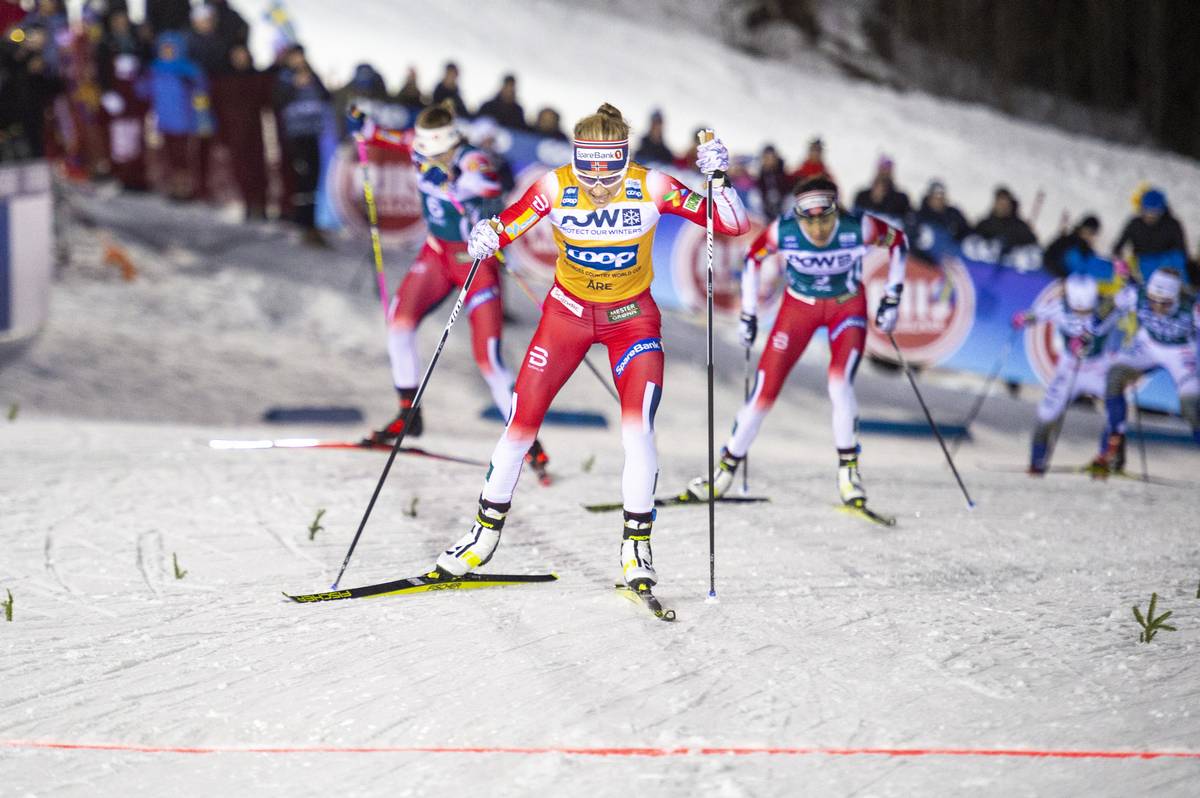 Increasing her tempo and beginning to jump skate, Johaug rounded the final bend in the lead with the win locked up. Her teammates, Weng then Jacobsen, crossing behind her in second and third, respectively.

As the other wobbly-legged women collapsed, writhing in agony with faces turned toward the snow, Johaug raised her arms in celebration, her lungs still functional enough to let out a loud yell. She looked as though she had just completed a particularly successful interval session, a much different appearance than the others. 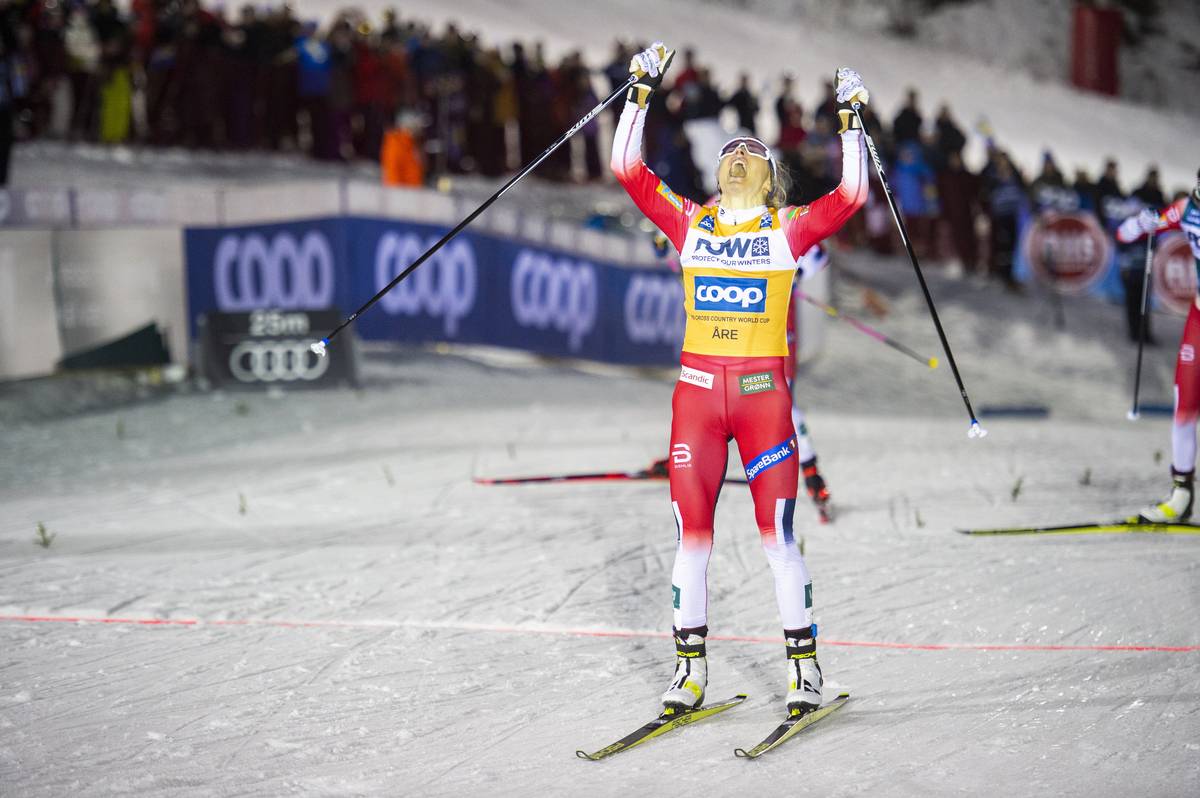 “It was a crazy race,” smiled Johaug as she spoke with FIS at the finish. “But, as you know, I love uphills, and today as well was my day. Of course, you cannot call it a sprint race, but for me, it means a lot to stand atop the podium and I worked really hard for that, so I’m really happy.” 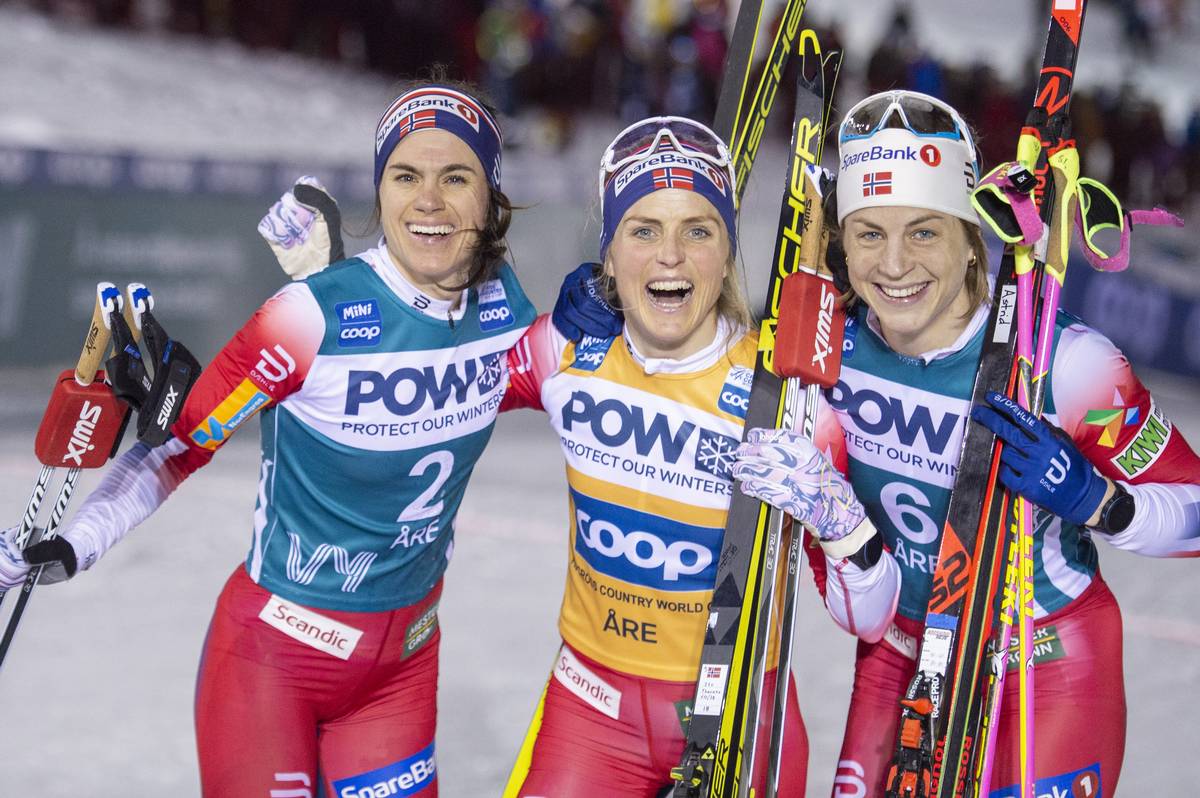 Commenting on the event in a post-race email, Caldwell wrote:

“Today was a very different kind of sprint. I wasn’t sure what to expect, but when we checked out the course yesterday, I was pretty shocked that we were literally going up an alpine hill! I had never done anything like this because and I know I have the potential to flood, so I wanted to make sure I did some pacing for my qualifier. It didn’t end up being a ripping fast qualifier, but it was good enough and I was honestly psyched to qualify on a course like this that doesn’t exactly play to my strengths.

“In my quarter I tried to get out fast and ski the technical corner how I wanted to and then I just focused on finding the faster snow and leaving a little left for the end. I was really happy with how my quarter went and on a course like this, making the semi final is a really good day for me. I also left everything I had in my legs on the course, so unfortunately in my semi final, even though I didn’t feel like I was breathing very hard, my legs weren’t exactly moving. So that was pretty different from a normal sprint where I usually feel like I can keep pretty good legs and energy through the final. Now it’s time for some recovery before the next stage!” 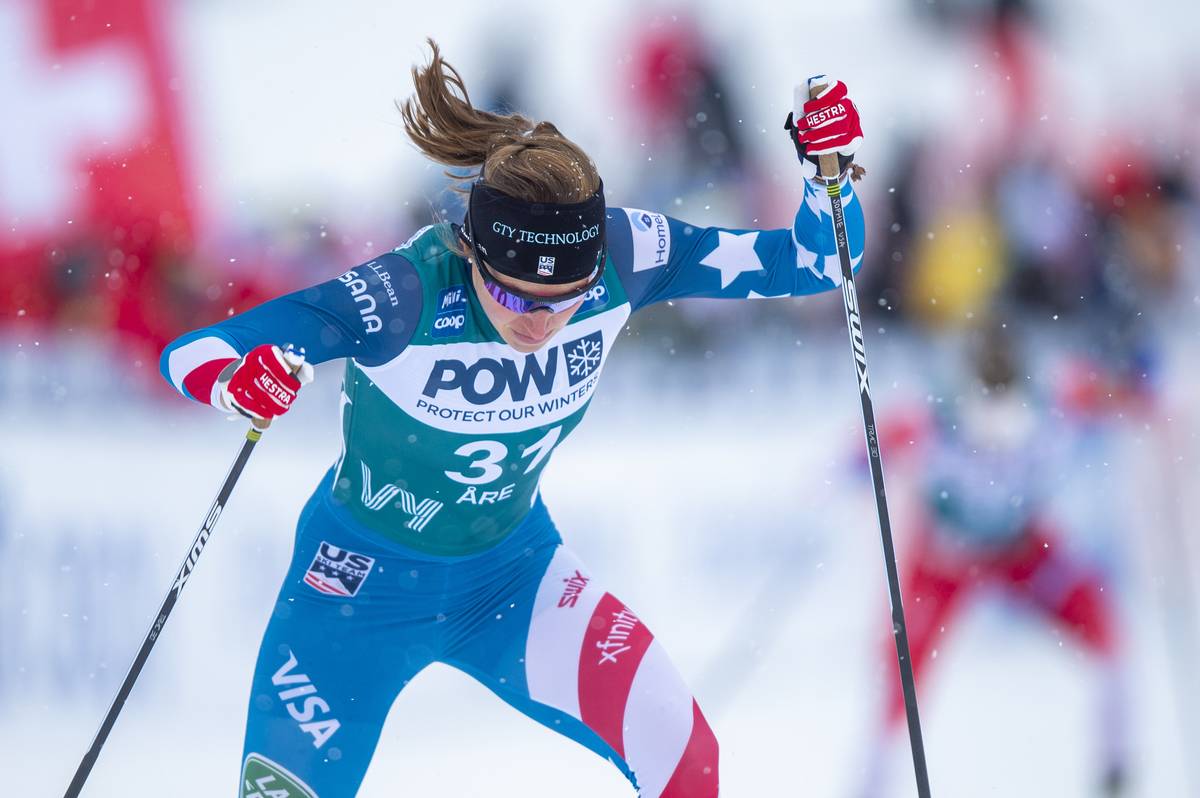 In a post-race call, Whitcomb provided further insight into the women’s day, expressing that the his athletes were “quite positive” about the result, but impressed by the difference in feelings between qualification and the quarterfinal.

Whitcomb also explains that because of impending weather, the planned 38-kilometer point to point race across the Sweden-Norway from Storlein to Meråker may not be possible. The backup plan is a 15 k race for both men and women on an approximately 3 k loop in Meråker.