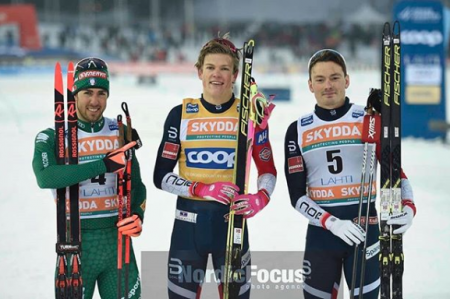 After two weeks away from competition, athletes revved their engines in Lahti, Finland for an individual 1.6-kilometer freestyle sprint, one of the final stops on the way to the World Championships. After a string of what he deemed “bad luck” in the first sprint races of the season in Ruka and Lillehammer, Norway’s Johannes Høsflot Klæbo came into the weekend with momentum from winning the last four individual sprints. Klæbo also arrived in Lahti on the brink of what could be a historic milestone; a win could advance him from possessing the joint-third most victories, tied with his opponent Federico Pellegrino of Italy with 12 each, to the joint-second most, tied with Ola Vigen Hattestad of Norway who retired in 2016.

As a penalty for obstruction kept him from advancing from the quarterfinals in Dresden, Pellegrino has not had an opportunity to move ahead of Klæbo since they last met in the final in Val Mustair during the Tour de Ski. In that event, Pellegrino challenged the Norwegian in both the semi and the final, but could not quite overtake him. Today in Lahti proved to play out in an eerily similar fashion.

Conditions in Lahti were reportedly fast and a bit wet. Temperatures hovered around freezing with some freezing rain lightly peppering the course throughout the day. This stability in the weather and on the tracks kept the playing field fair as the athletes sprinted through the heats. 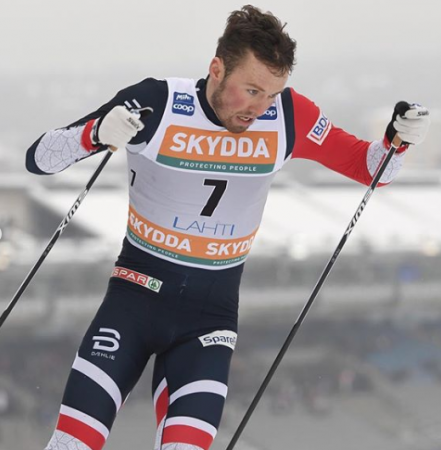 Emil Iversen of Norway charges on his way to second place in heat two of the semifinals of the 1.6-kilometer skate sprint in Lahti, Finland. (Photo: Instagram @langrennslandslaget Screenshot)

In the quarterfinals, Klæbo and Pellegrino went one-two in heat one, advancing into the first heat of the semi-finals. This first semi proved to be the faster of the two. The Norwegian again took the win in 2:49.84, with his teammate Eirik Brandsdal close on his tails. Gleb Retivykh and Pellegrino, who finished in third and fourth, respectively, advanced as lucky losers. Less than one second separated the six men in the heat, and all of the men skied faster than those in the second heat.

In the second semi-final heat, Krogh finished first in 2:50.98, followed by his teammate, Emil Iversen, making it a final of four Norwegians, an Italian, and a Russian.

As the men charged out of the gate in the final round, Retivykh led the pack, with the other men jockeying for position behind him. Per usual, Klæbo began to surge on the climbs, using them as his opportunity to move to the front of the pack. The second half of the course featured a steady climb with a steeper punch at the end before sending the athletes down and around a turn into the stadium. On this climb, Klæbo set the pace, trying to slowly pull away from the group. But Pellegrino was not ready to let him go. The Italian crested the hill just behind and as the two men tucked into the downhill, a small gap was created before the next skier back. 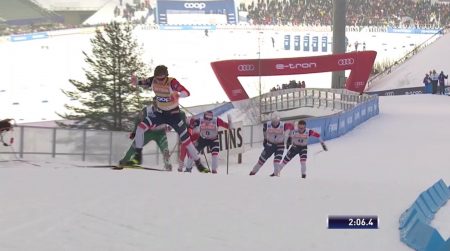 Pellegrino tried to position himself on the inside of the final turn to get in front of his opponent, but he could not quite make his move. Klæbo was still in front heading into the final straight with Pellegrino nipping at his heels. Krough, who closed the gap they had created was also in the hunt, chasing the leaders to the line. The two kept the pressure on Klæbo, giving him no opportunity to risk his position with an early finish line celebration, but they were not able to surpass him. 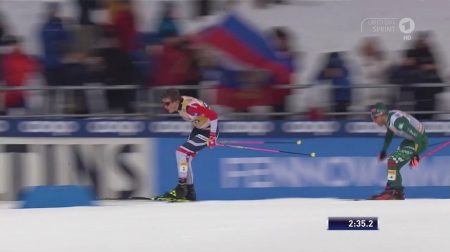 No North American men qualified for the heats, which came as a surprise to both the athletes and the coaches. Logan Hanneman (APU) posted the fastest qualifying time for the U.S. placing 32nd overall after missing the heats by .22 seconds. Simi Hamilton (USST) finished 36th overall, and Erik Bjornsen (USST) 42nd.

Evan Palmer-Charette was the lone Canadian entered; he placed 67th.

“Definitely a bit of a puzzling qualifier for the guys,” said Matt Whitcomb in a call. “An impressive one out of Logan, but we know he can ski into the top-30 too. Erik and Logan and Simi all said they felt great. We are coming out of a training camp [in Vålådalen, Sweden] where it has been cold, and it is possible that we just need a little rest and a little racing and that will get things going.”

Though he was offered starts in both Period 1 and 3, it is Hanneman’s first time racing internationally this season. The APU skier was the top qualifier in the 1.3 k skate at US Nationals, placing second in the final. He also took third in the final in the classic sprint. When Hanneman competed in the sprint in Lahti last March, he placed 49th overall.

“Today was pretty good for me!” Hanneman wrote in an email. “Of course, being only .2 sec out from the heats hurts a little, but it was my career-best finish so that is a positive for sure. Looks like from the splits I was in 15th at 900m, which was nice to see since my goal was to take the first half out faster than I did last year. When I raced this course last year, I learned that it is a little tricky to make time back on these guys on the last hill… this year I learned that I can lose a lot of time to these guys on the last hill. Although today, with the fast conditions, the time spreads were really tight so it wasn’t too much time that I lost.”

As illness kept him from racing in the city sprints in Dresden, it has been over a month since Hamilton last put on a race bib.

“I wish I felt better about my day today,” Hamilton told FasterSkier in a call. “I’m still kind of baffled by how it went. I felt amazing and I felt like I skied the course better than I ever really have before and I’ve had some decent races here before. The conditions were great, our skis were awesome, I just don’t know what happened. The only thing I can think is that sometimes it takes me a little bit of racing and hard training to get that really good sprint gear going again, but I felt incredibly fit, I felt like I paced it really well, I was just really confused when I saw the qualifier results.”

During his time away from the World Cup, Hamilton traveled back to the U.S. to spend some time back in Vermont, where on top of training, he proposed to his girlfriend, Sophie Caldwell. Hamilton returned to Europe two weeks ago to participate in the Vålådalen camp. While the camp went well for him, the aforementioned temperatures prevented Hamilton from putting in those hard training efforts, but there is still time before Seefeld to capitalize on his fitness.

“It was incredibly cold, so we weren’t doing a lot of really hard intervals or hard training, but all the other indicators were really good during that camp,” he said. “Fortunately, this wasn’t the World Champs day, and that’s obviously the race that really counts. So we’ll just kind of tweak training a little bit, and hope for some better feelings for Cogne, and plan on feeling really good for the sprint in Seefeld.”

Despite his disappointment in his own performance, the day had a silver lining for Hamilton, as Caldwell landed on the podium with a second place finish in the women’s 1.4k sprint.

“I’m super psyched that Soph had such a great day – I’m just amazed by that,” he shared. “That she can fly back here to Europe two days ago, then put together a day like she did today… Whatever frustrations I had quickly evaporated with her day. I’m just so happy for her.”

Hamilton has a second chance to find his top gears when racing continues tomorrow during the classic team sprint where he will line up with Bjornsen.

“It’s pretty much my first classic race of the year,” Hamilton laughed. “The only other classic race I’ve done was in Lillehammer, the 15 k in the pursuit on the third day, so it will be interesting to see what happens, but I’m psyched.”

The team sprint will be held on the same course as the individual race today, a change from past years of the Lahti Ski Games.

“They’re not using the old course, which I’m a little bit bummed about,” said Hamilton. “So we’ll have to see how the regular sprint course classic skis, which on the World Cup anyway, no one has classic sprinted on that loop. It should be exciting, it should be fun. Conditions look good for some fast Klister skiing, so hopefully, we don’t get too much snow overnight. But yeah, we’re psyched.”