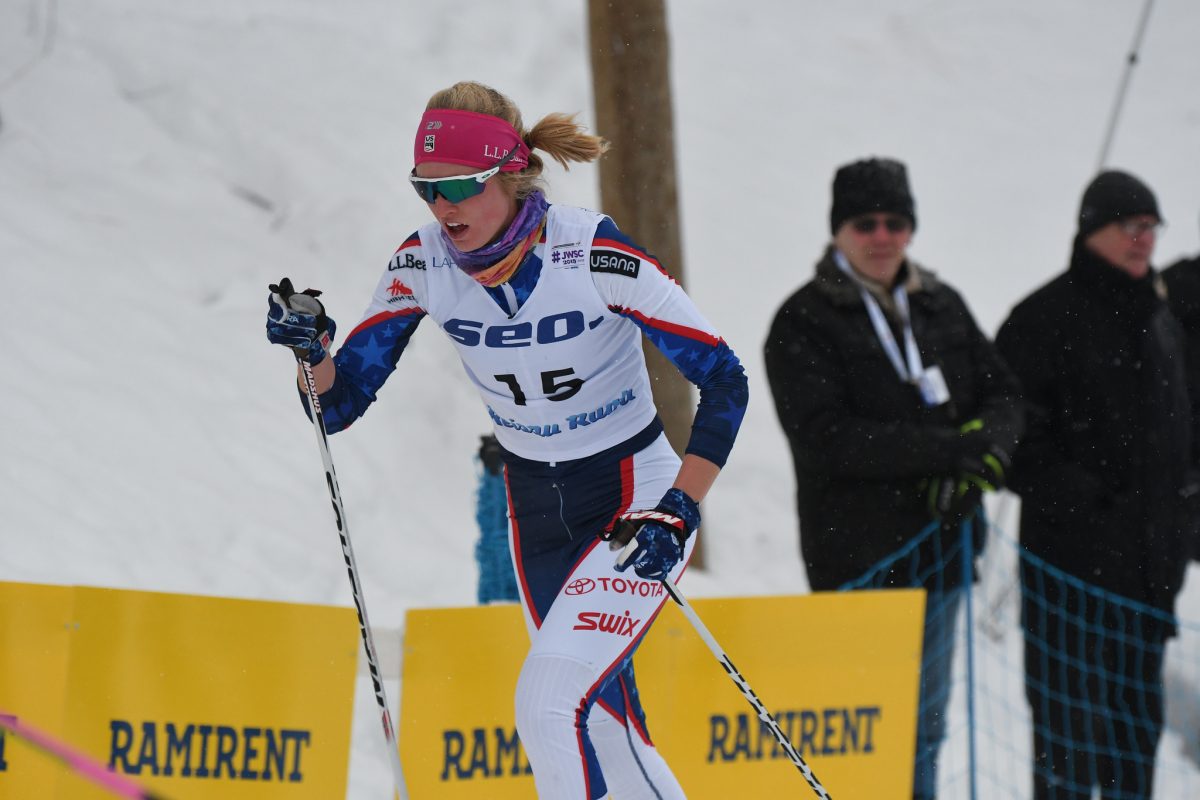 Of the four Russian athletes starting the 15-kilometer classic mass start in Lahti, Finland three placed in the top four. Anna Zherebyateva won in 40:31.4 minutes as she was able to stretch her nine-second gap at 10 k to 23.5 seconds by the finish. Also from Russia, Lidia Durkina placed second (+23.5), Germany’s Katharina Hennig skied to third (+37.5).

“My tactic was to make a gap in the second loop,” Zherebyateva said during the post-race press conference. “So I did exactly what I wanted. It went really well. Tracks were exactly right for me. This gold medal is an important step for my sport career.”

Yana Kirpichenko was the third Russia in the top-five as she placed fourth (+41.6).

The best North American finisher was U.S. skier Hailey Swirbul who raced to 10th (+1:27.8). Swirbul was positioned 29th at the 5 k time check but steadily moved up in the field as the race progressed. By 10 k she had positioned herself in the top-15.

For the twenty-year-old Swirbul, this is her first go at U23 Worlds after participating in three Junior Worlds as an U20. Last season in Goms, Switzerland she placed second in the 5 k classic and third in the 10 k skiathlon.

Similar to the U23 women’s race, Russian skiers dictated the pacing at the front of the pack — the four Russian starters swept first through fourth place.

In the groove is in the groove. Norway’s twenty-five-year-old Johannes Thingnes Bø scored his 10th IBU World Cup win of the season today in the 10 k sprint in Antholz, Italy. Bø won the race in 23:53.9 minutes with a single penalty in standing. The Norwegian leads the IBU World Cup overall and padded his lead with his fifth sprint win this year.

“It was quite difficult; the altitude here is quite heavy and with the new tracks, I felt dead from 5K so the last 5K was really tough,” Bø said to the IBU after the race. “I managed to have a good plan for the race. When I shoot nine targets, I was quite happy and then it was just to fight hard for the finish line. I like this year’s track; I liked last year’s too because it was not so painful.”

Bø’s season thus far has been a study in speedy skiing. His shooting stands at 87% for accuracy (82% standing, 91% prone) with his superior skiing speed carrying him to the World Cup overall lead. In Antholz today, his course time for each of his two 5 k laps were ranked first.

Racing continues tomorrow in Antholz for both the men and women with the 12.5k  and 10 k pursuits.

In the 5 k-freestyle individual start Jessica Yeaton (APU/Australian National Team) placed first with a winning time of 15:01.9 minutes. She was in a tight race for the top spot with U.S. Ski Team/SMS T2 athlete Sophie Caldwell who finished 3.0 seconds back. Caldwell is back home in Vermont training and preparing for the 2019 World Championships.

“Today’s race went super well for me; I had awesome skis despite tricky conditions/weather leading into the race – our wax tech did a phenomenal job,” Yeaton wrote to FasterSkier. “The course here is really good for me with all the steady climbing in the first part- I just tried to push hard to the top of the course and then survive and carry my speed on the downhill, which turned out to be a good tactic.
“Between US Nationals and now I definitely feel like I am in a good place leading into Seefeld. I struggled with some injuries in the fall and was forced to do a lot of cross-training (especially on the bike) and skip the early season races in Nov/Dec. In retrospect I think this actually was a blessing in disguise, as I ended up putting in a super hard training block and gaining a lot of fitness. Looking ahead to Seefeld, my goal is to top 30 in one of the races, with my main focus being on the skate events (30k and sprint), and the 15km skiathlon. I am really excited for the rest of the races this weekend; they are my final prep before heading over to Europe to race on World Cup and in Seefeld.”

Kyle Bratrud (SMS T2) won the men’s 15 k skate in 25:27.1 minutes. Bratrud, who was recently selected to the 2019 U.S. World Championship Team, has been a top-performing distance skier this season on the SuperTour.

“Today went well,” Bratrud emailed. “After Nationals, I made the tough decision of turning down World Cup starts in Otepaa and Ulricehamn in order to get some quality training in for the World Champs. Today reflected that as I felt a little tired and pretty flat from not racing since Nationals. That being said, I expect to keep feeling better each race and I should be in a great place when I fly to Europe on the 4th!”

Akeo Maifeld-Carucci (CGRP) placed second in a time of 26:18.9. It was Carucci’s second SuperTour podium of the season and his best career SuperTour result. In West Yellowstone, he was third in the 15 k skate behind Ben Lustgarten (CGRP) and Bratrud.