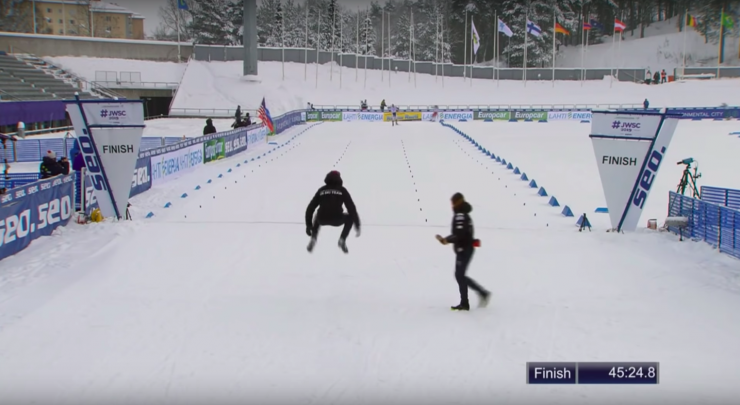 Last Saturday, the American women placed fourth in the U20 relay at 2019 World Junior Ski Championships. In any other year before 2017 this result would probably be headline news; considering that the Americans had the youngest team in the race (you can compare athlete birthdates from the women’s race here if you really want to get into the minutiae), this may well be headline news next year, or the year after that, when the same athletes are potentially contending for the podium.

But a couple hours later, the U20 men went out and won their race, taking home a historic relay gold and deservedly garnering most of the headlines for the weekend.

Both races started in the middle of the night for most of this continent, and a daily viewing pass cost 9 Euros. You could be forgiven for not having woken up to watch it live. If you didn’t, or even if you did and you’d like to see it again, below are full replays of each race, courtesy of what appears to be a Russian YouTube user. (The same user also uploaded full broadcasts of the U20 women’s 5-kilometer freestyle interval start, U20 men’s and women’s classic sprint, and U23 men’s and women’s classic sprint if you’re looking for more.)

Here are time stamps for the start of each leg in both races, as well as a few choice moments from the end of the men’s race (all times are in reference to a point on the YouTube video, not the time on the live timing race clock, which is a few minutes behind the video timestamp):

4:48, the race begins, with Mara McCollor skiing the scramble leg

3:57, the race begins, with Luke Jager skiing the scramble leg

38:32, third exchange: Hagenbuch tags off to Gus Schumacher in third place, 2.0 seconds out of first

43:40, Schumacher and Germany go to the front and start pushing the pace, Schumacher visibly elevating as he V2s up a hill to cover Germany’s attack

46:08, with roughly a kilometer to go, the camera cuts to the Americans waiting in the stadium, cheering on Schumacher. “Team U.S. is cheering,” says the announcer. “But I have to say that Team U.S. is always cheering. It doesn’t matter if they win, or if they are number five or number six; they always have great team spirit up and running.” (Jessie Diggins said in response to this remark from the broadcast, in an ephemeral Instagram video, “that’s right.” If you were following social media on Saturday, you would have noticed basically the entire U.S. Ski Team assembled for watch parties to cheer on the U20 men and women, several of them doing so in advance of their World Cup freestyle races in Ulricehamn later that day.)

46:39, it’s Germany – America – Russia at the top of the penultimate hill, with a visibly tired Russia digging deep with labored technique but nonetheless staying with Schumacher

Schumacher unleashes a devastating jumpskate … . The Finnish announcer exults, in slightly broken but endearing English, “And look at Schumacher bouncing! Schumacher is bouncing like maniac!”

47:50, approaching the top of the final uphill, Schumacher unleashes a devastating jumpskate, creating the separation from Russia and Germany that he will carry all the way to the finish. The Finnish announcer exults, in slightly broken but endearing English, “And look at Schumacher bouncing! Schumacher is bouncing like maniac!”

47:57, there are literally as many USST jackets on course here as there are representatives from all other nations combined. Several Americans sprint to follow Schumacher over and around the crest of the hill, waving flags and screaming their heads off.

49:22, camera angle straight down the finishing stretch, with Schumacher narrowly but inexorably leading in Alexander Terentev of Russia. A meter past the finish line, Ogden is jumping 3 feet off the ground while Jager applauds.

49:32, Schumacher crosses the line in first. Ogden and Jager tackle/hug him.