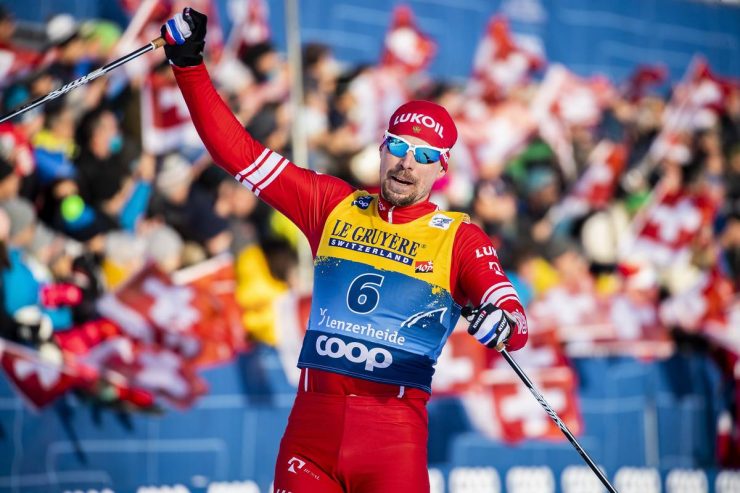 The starting corral was blocked by a wall of red before the start of the 15-kilometer mass start freestyle in Lenzerheide, Switzerland. Of the top ten ranked athletes, eight hailed from either Norway or Russia, interrupted only by Iivo Niskanen of Finland and Lucas Chanavat of France. 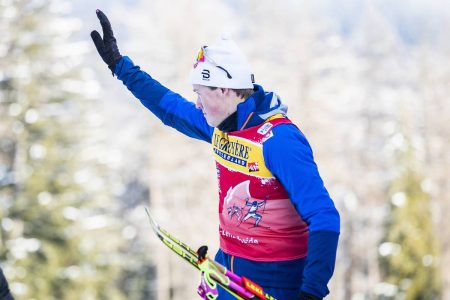 Johannes Høsflot Klæbo thanks his supporters before climbing into the second spot on the podium after the first stage of the 2019/2020 Tour de Ski. (Photo: NordicFocus)

Front and center was last year’s victor Johannes Høsflot Klæbo. He became the youngest Tour de Ski Champion at 22 years of age after holding off Russia’s Sergey Ustiugov who was gaining on the Norwegian throughout the final climb up the Alpe Cermis. It was clear in the final meters that there was no showmanship or gamesmanship in this performance; the young star was fully spent as he collapsed over the line.

Now an aged and wizened 23-year-old working on his tactics and gears in distance racing, Klæbo aspires to become the second man in history to win consecutive tours. Swiss athlete Dario Cologna did this in 2011 and 2012.

Klæbo is not a lock for this achievement — today’s opening stage made that abundantly clear. He will need to hold off the likes of Sergey Ustiugov and Alexander Bolchunov (RUS), Niskanen, Emil Iversen (NOR) and an otherwise deep field all vying for the same goal.

“I will try my best and I will count [my time] after the last day,” Klæbo told FIS during a pre-race press conference.

With the starting pistol marking the start of the nascent tour, the men began soaring around the course, through snow laden pine forest in front of high mountains emerging from their wreath of snow.

For the first 10 k, the field held strong in a long train. The top men, who stemmed from the first row of the start line, regularly exchanged the lead and the top 40 were separated by 10 seconds. Though the pace began to accelerate, the top ten were only spread by three seconds with 1.5 k to go. 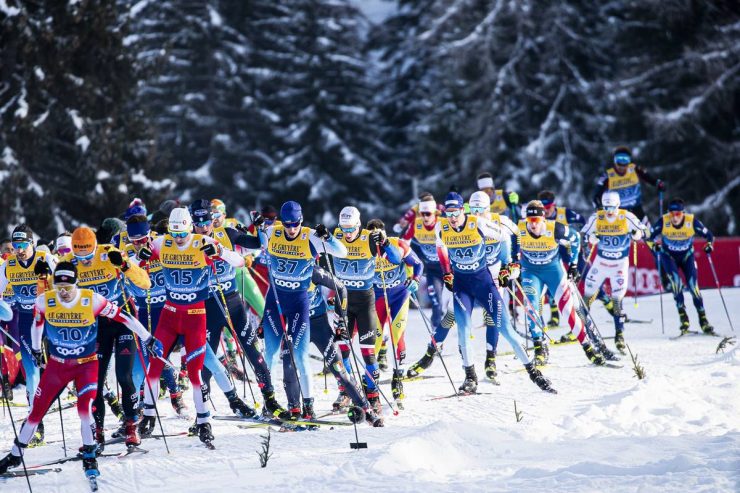 A dense pack of skiers during the first stage of the 2019/2020 Tour de Ski, a 15-kilometer mass start freestyle. Logan Hanneman can be found on the right side of the image wearing bib 85. (Photo: NordicFocus)

Moves and countermoves. With 1 k to go, Ustiugov took charge. He rocketed off the front to create a gap to the lead pack. His teammate Bolshunov was three seconds back, along with Cologne, Iversen, Klæbo, and their Norwegian teammates Simen Hegstad Krüger and Sjur Røthe.

Ustiugov managed to maintain his gap and flew through the final straightaway in a confident V2. In the screen behind him was a pack of men whose final standings were far less certain. Klæbo and Bolshunov were dueling tête-à-tête in a sprint to the finish, sliding their boots over the line in sync for a photo finish. It was decided that Klæbo edged out his competitor for second, though he and Bolshunov will both enter the second stage of the tour four seconds behind Ustiugov. 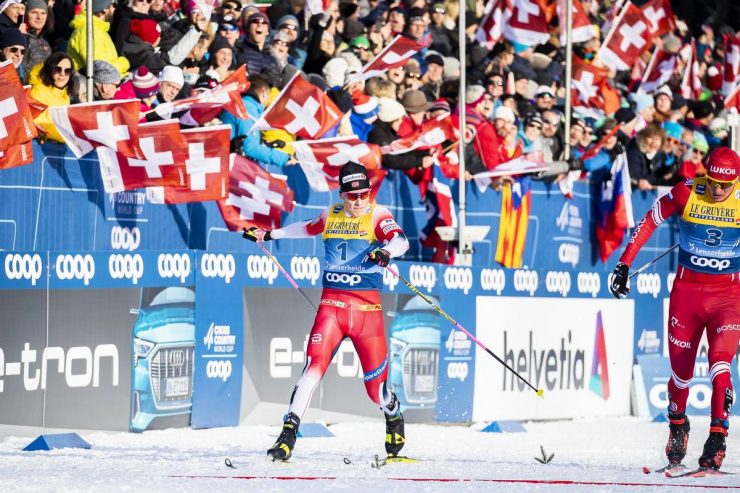 Johannes Høsflot Klæbo (NOR) and Alexander Bolshunov (RUS) slide across the line in a photo finish at the end of the first stage of the Tour de Ski. (Photo: NordicFocus)

Iversen surged for 4th (+7.2) ahead of his countryman Martin Løwstrøm Nyenget (+8.6) who bested Tour de Ski veteran Cologna, Hans Christer Holund, Jan Thomas Jenssen, and Sjur Røthe in a five-way photo finish. Finishing in the order listed, the five men were separated by a margin of 0.4 seconds. Krüger rounded out the top ten one second later (+10.0). 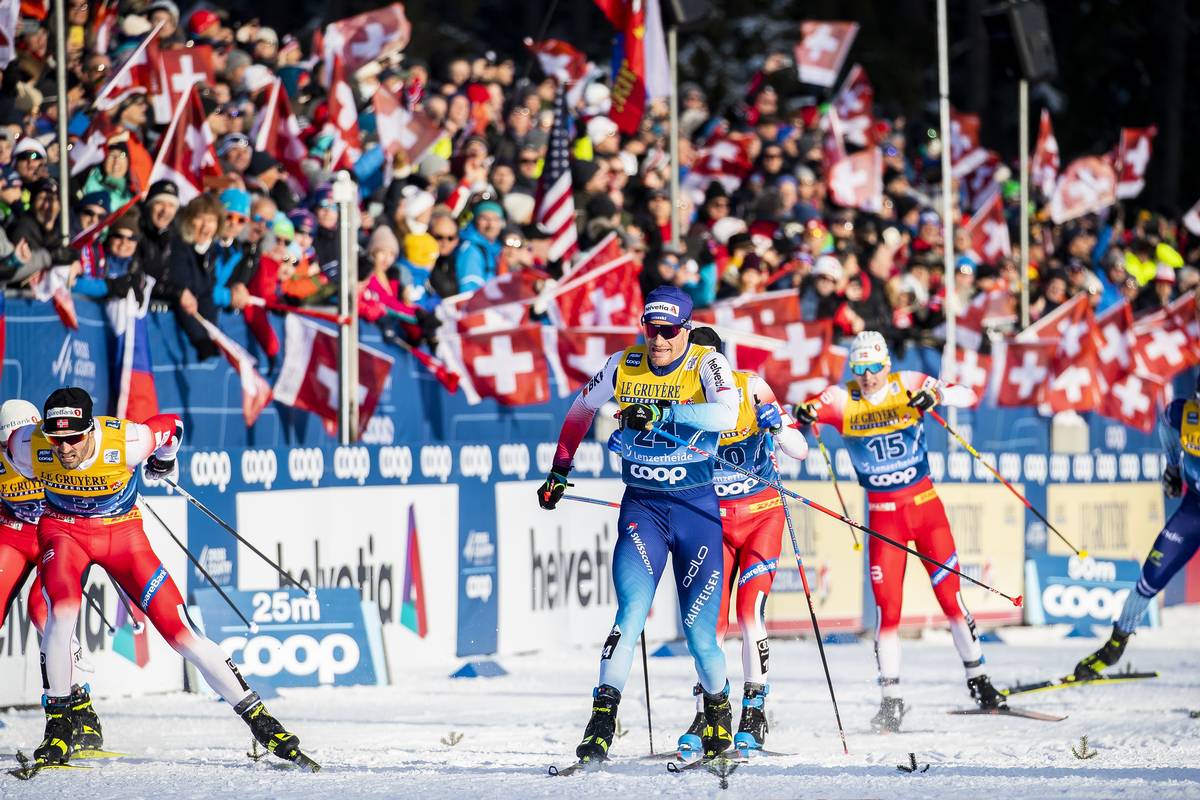 Dario Cologna (bib 24) finishes amongst a herd of men vying for position at the end of Stage 1 of the 2019/2020 Tour de Ski, a 15-kilometer mass start skate in Lenzerheide, Switzerland. (Photo: NordicFocus)

“It was a really good performance and the shape was okay,” Ustiugov told FIS through a translator at the finish. “It was for sure a pleasure to win the first stage and I wish to show the same results on the next stages. Big thanks to Russian fans because it’s a really big pleasure to hear Russian people [cheering] here in Switzerland. It’s great.” 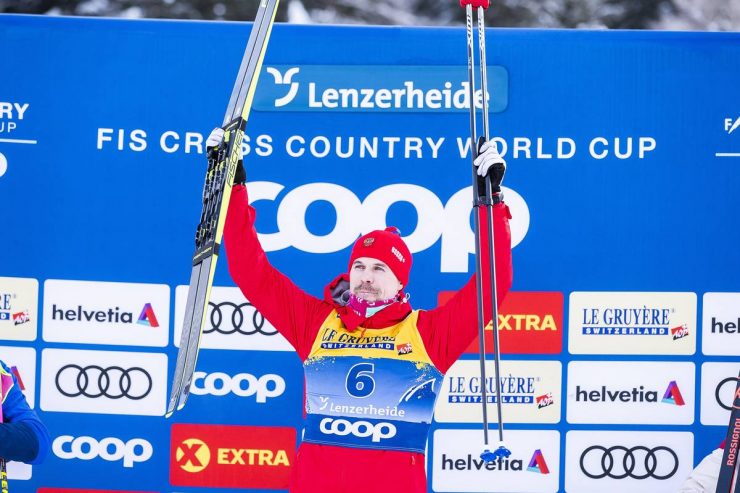 Today’s victory marks the Russian’s eighth win in a TdS stage, advancing him to the second most behind Petter Northug who has 13 wins. The winner of the 2016/2017 TdS, Ustiugov has reached the overall podium in three of his last four rounds, only missing the final TdS podium in the 2017/2018 tour where he withdrew after the 5th stage. The Russian also won the first distance stage of last year’s TdS. 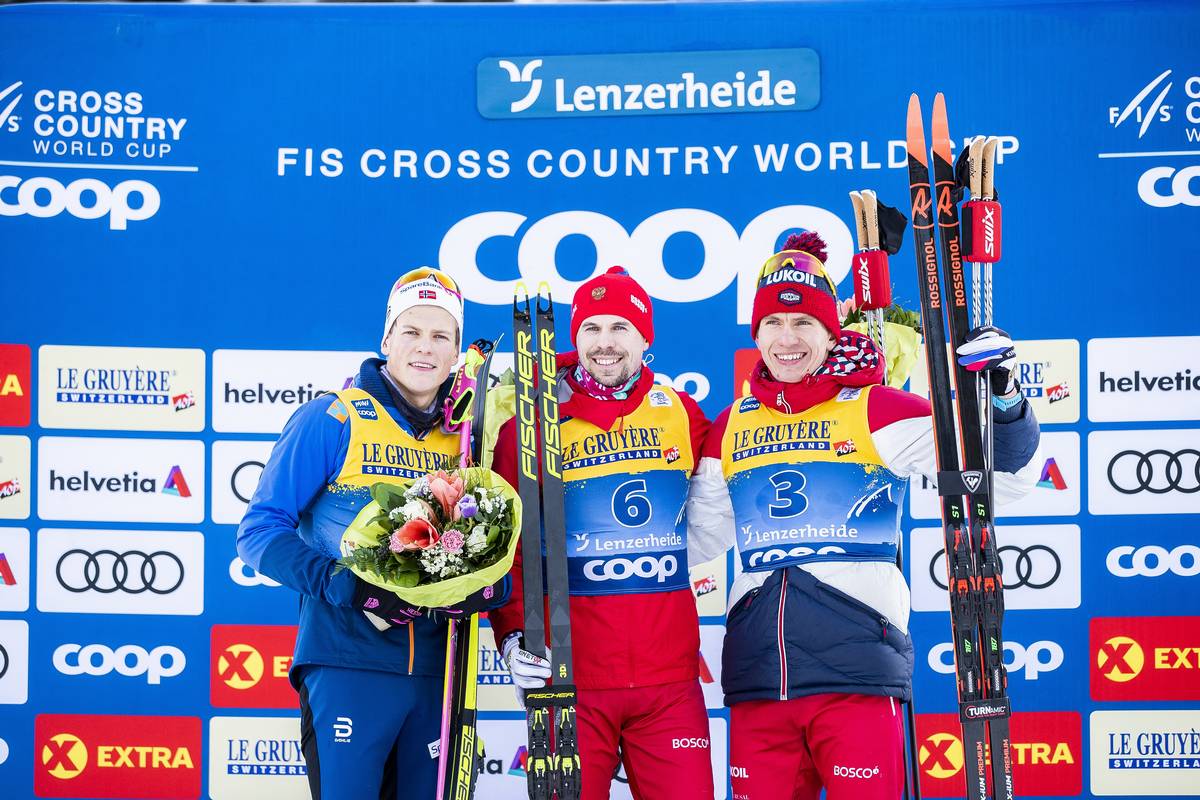 The men’s podium of the first stage of the 2019/2020 Tour de Ski, a 15-kilometer mass start skate in Lenzerheide, Switzerland. Sergey Ustiugov (RUS) took the win over Johannes Høsflot Klæbo (NOR) and Alexander Bolshunov (RUS) who were second and third, respectively, in a photo finish. (Photo: NordicFocus)

Three Americans started in Lenzerheide. David Norris finished as the top ranked American in 58th (+1:11.2). Kevin Bolger finished 64th (+1:35.0), followed by fellow Logan Hanneman in 69th (+1:42.1). Simi Hamilton was slated to start, but withdrew from the TdS due to a pulled muscle in his groin.

For the first nine kilometers, Norris hovered on the cusp of the top-30. After the race, Matt Whitcomb explained the energy-expenditure challenges of racing in this position, along with the strategy of sprint specialists Bolger and Hanneman.

“This was a fun mass start – fast and flowing,” wrote Norris explained an email after the race. “For the first 12km or so I felt really comfortable in the group. I tried to ski relaxed and avoid any of the chaotic crashes and tangles that seemed to occur each lap. With about 2 km to the finish I felt great and my skis were running well, but all of the sudden I bonked incredibly hard – got tunnel vision and struggled to avoid tripping on myself. It was a tough way to finish the race, but I’m optimistic I have better days ahead in this tour.” 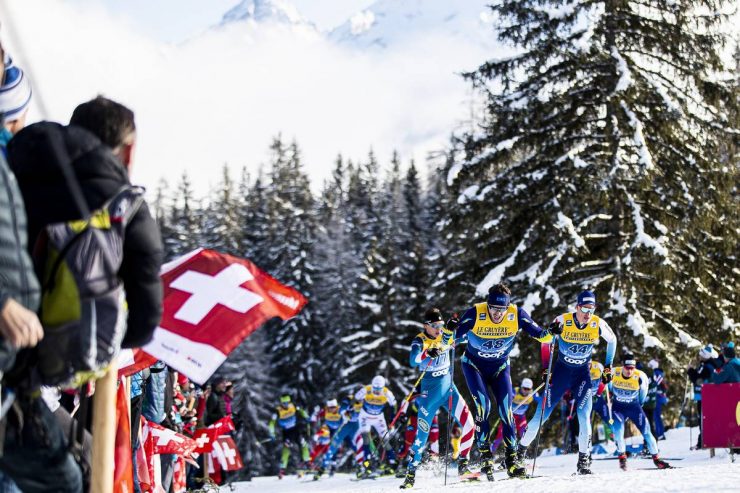 Swiss flags flying against a breathtaking backdrop. Wearing bib 77, Kevin Bolger can be found at the center. (Photo: NordicFocus)