FasterSkier recently shared a press release on behalf of the US Nordic Olympic Women (US NOW) announcing Julia Kern as the 2022 recipient of the fourth annual Gold Rush Award. The release included comments from 2021 winner Jessie Diggins on the qualities that she, along with the other past winners, recognized made Kern deserving of this year’s award, but it became clear that there was a gap in FasterSkier’s coverage on the history of US NOW and the evolution of the award.

To learn more, FasterSkier connected with the spark that launched Gold Rush Award into existence: recent U.S. Ski & Snowboard hall of fame inductee and early groundbreaker for American women’s skiing, Alison Owen-Bradley. It was Owen-Bradley who planted the seeds to bring together the generations of women who have represented United States in cross-country skiing at an Olympic Games, bringing US NOW into fruition.

According to Owen-Bradley, US NOW filled a gaping hole in connection among the women who helped set the foundation for what is now one of the most successful women’s ski programs in the world. Though each of the 53 women Olympians had played a role in propelling the next generation forward, opportunity for connection between the generations had been lacking. With individual efforts, a network amongst these women slowly began to connect sooner, but when the World Cup swung through Quebec City in March 2019, it provided an ideal opportunity to reunite as a collective.

“We ended up having quite a few Olympic women there,” recalled Owen-Bradley in a call. “And it was fun because we wore our vintage clothing to the race, so we had all kinds of different eras of Olympic clothes. It was so congruent because we were really cheering on the latest, greatest women racing but we were also together with our teammates from the past, and it kind of just kind of grew from there.”

Having been teammates long before the era of Facebook – in fact, some well before the internet – it had been hard for these women to feel connected and maintain ties after careers ended. Owen-Bradley said that before the reunion, she didn’t have contact information for many of these women, and consequently didn’t feel the relationships had been sufficiently developed among the various generations.

With some word-smithing to nail a catchy acronym, the energy and camaraderie established at this reunion evolved into US NOW. But there’s much more to the name than meets the eye.

“US NOW – being retired from ski racing, who are we now? What have we learned? There’s so much gold in that for mining, in a metaphoric way. All these women, what have they learned? What have they gone on to do? How was it good and bad in their lives to devote their time to this? I don’t think we’ve even come close to exploring that and getting the nuggets [of wisdom] out of what women went through and and got from those experiences. But also, how hard was that? And was it worth it? And what would have made it more worth it? And then to just go forward in a way that uses that wisdom.”

When the coach of the first women’s Olympic team, Marty Hall, was inducted into the U.S. Ski & Snowboard Hall of Fame in the spring of 2018, he invited Owen-Bradley to attend the ceremony, having been one of his original athletes. While traveling through Norway to race at World Masters, a print inspired by the Birkebeiner story caught her eye; instead of the image she was familiar with, which depicted two warriors valiantly carrying Prince Haakon to safety on their trek through the mountains, it was an image of Prince Haakon’s mother, Queen Inga. She too had made the arduous journey on skis to save her son, and yet, Owen-Bradley had never seen her included in the story’s artwork.

Finding it symbolic of the emergence of women’s cross-country skiing in the US over the last 50 years, Owen-Bradley purchased the print, and decided it would be a fitting gift to honor Hall at the ceremony. “He had been the first Olympic coach for women and had kind of gotten us on the map.”

However, the piece of artwork was large. She laughed as she recalled giving it to him, but also telling him it did not need to take up a wall in his home.

“We decided that it would be a traveling picture, and we would pick someone every year to give it to, and so out of that came this idea [for the award].” 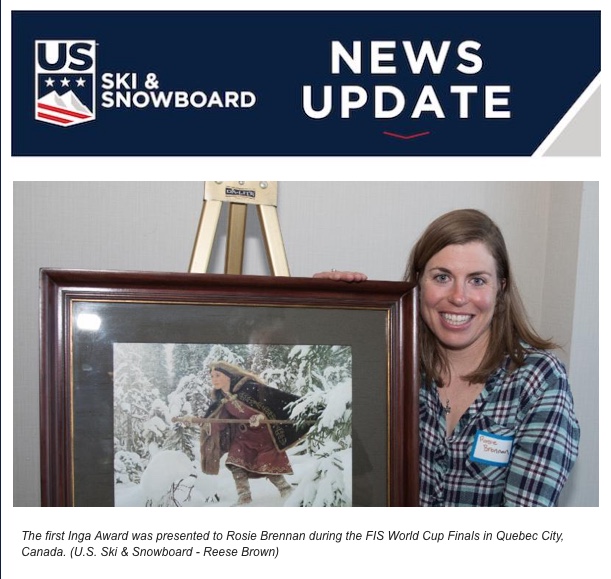 In 2019, following the World Cup, the Inga Award was presented to its first recipient: Rosie Brennan. Having rebounded from a season impaired by the effects of the mononucleosis virus, Brennan was selected based on the “courage, fortitude, grit, determination and raw talent [it took] to achieve an extremely high level of success on the international ski racing circuit [that] season.”

Over the next year, however, Owen-Bradley began to dwell on why the image of a Norwegian woman should be the symbol for the efforts of the women in the American cross-country program. She began looking for inspiration closer to home, eventually finding an equally strong, noteworthy, and under-recognized alternative.

“I changed it to the Gold Rush award because in the High Sierras during the Gold Rush era, women were nordic racing. Not on the same levels that we do it [now], but they had cross country races that that women raced in… So I thought, ‘Oh, what a cool thing — the Gold Rush.’”

She also noted the ties between racing for gold medals at the Olympics, which Kikkan Randall and Jessie Diggins achieved in 2018. Working with artist Andy Rogers, a new image was created, superimposing the image of a woman on skis in the High Sierra on the bust and profile of a determined and modern-looking woman in a race headband and sport sunglasses. In 2019, this image was presented to co-recipients Sadie Maubet Bjornsen and Sophie Caldwell Hamilton.

While each of the women mentioned to this point have unquestionably racked up an impressive resume of results, the award is not meant to recognize what happens on the race course directly. Rather, Owen-Bradley explained a recipient is selected for the award by “exemplifying and showing the grit and the grace that it takes to be successful.” It’s what happened behind the scenes to get the result, not the result itself.

“An example would be Sophie whose mother died [in 2019] and she still went on with such grace and was so successful through all of that. And Sadie because of all the injuries she worked through and kept going… So, to me, it’s been about the grit and the grace of what it takes to be a woman nordic ski racer at that level.”

Approaching the 50-year mark of her own Olympic debut and now focusing more of her time and energy on her small farm in Idaho rather than the cross-country ski world, Owen-Bradley explained that this year, she felt less directly connected to the potential recipients for the Gold Rush award. She decided the decision should be made collectively amongst the four previous winners, to which she would add a fifth vote. After some discussion, the group voted unanimously for Julia Kern.

A member of the U.S. Ski Team since 2017, Kern’s progression on the international level has been steady, but non-linear. Alongside leaps forward, she’s faced her fair share of injuries and setbacks. Both the 2020/2021 season and her first Olympic appearances in 2022 left her wanting more, but interjecting these lows during the 2021/22 race season were a slew of career highlights. Her top results include two individual fourth-place sprint finishes on the World Cup, a team sprint podium in Dresden, a handful of other World Cup top tens, and finishing the year winning three out of four events at the joint U.S SuperTour Finals / Canadian National Championships in Whistler, BC.

And in February 2023, she’s heading into a World Championship which will take place at the venue where she earned her first World Cup podium in December 2019: Planica, Slovenia.

According to the past award recipients on the selection committee, it was the juxtaposition of these celebrations and challenges over the last few seasons that highlighted Kern’s candidacy for the award this spring.

“To me, what is special about this award, is first that it was voted on by this very incredible group of women who all share tenacity and drive to get through challenges and be better on the other side and second, that it awards just that and not results,” explained Brennan in an email. “Julia exemplifies this in her ability to be a strong teammate, no matter what the circumstances are. She holds her head high and goes out of her way to never bring people down when things are tough, aren’t going her way, or she’s faced with a challenge. When something doesn’t work out for her, she immediately jumps gears and does literally whatever she can to help her teammates have success.

“On top of that, she doesn’t lose faith in herself, she continues to fight, look for opportunity and carry an optimistic outlook towards her future. She has shown this many times after coming off a slump, injury, or some other challenge to find herself notching career bests. I think these things aren’t mutually exclusive and that we all have a lot to learn from Julia’s ability to be an exceptional teammate and in turn have that give her energy to continue chasing her own goals.”

Commenting on her nomination, Kern attributed her own success to the efforts of the women who came before her, including those who would present her with the award.

“​​I am incredibly honored to be given the Gold Rush Award by such an incredible group of women. US NOW is a group of women who have paved the way for U.S. skiing, many of whom have been personal role models and mentors to me in skiing and in life. I would not have had the opportunities, experience and knowledge without their hard work and passion for giving back to the younger generations. The past few years have been challenging for a variety of factors, and it was rewarding to come back stronger with my best season yet.”

As the list of award winners grows and US NOW builds momentum, Owen-Bradley hopes the award can be expanded to include a monetary prize in addition to the print and tribute. Acknowledging the increase in representation for women across various aspects of skiing, such as coaching and waxing, she would love to see new awards developed to recognize these important examples also.

When Owen-Bradley began skiing as a child in the 1960’s, her only option was to join the boys program; Title IX did not pass until June 1972, at which point she was 19 and had already raced at a World Championship. As she reflected on the amount of opportunity for women in cross-country skiing now, and what the creation of US NOW and the Gold Rush Award means to Owen-Bradley personally, she expressed feelings of joy and optimism.

“For me to go from not having a place, to having these strong women’s teams – it’s just so fun.”